Alan Thatcher May 20, 2017 No Comments on Brad Hindle Interview: Why Gregory Gaultier is shining so brightly 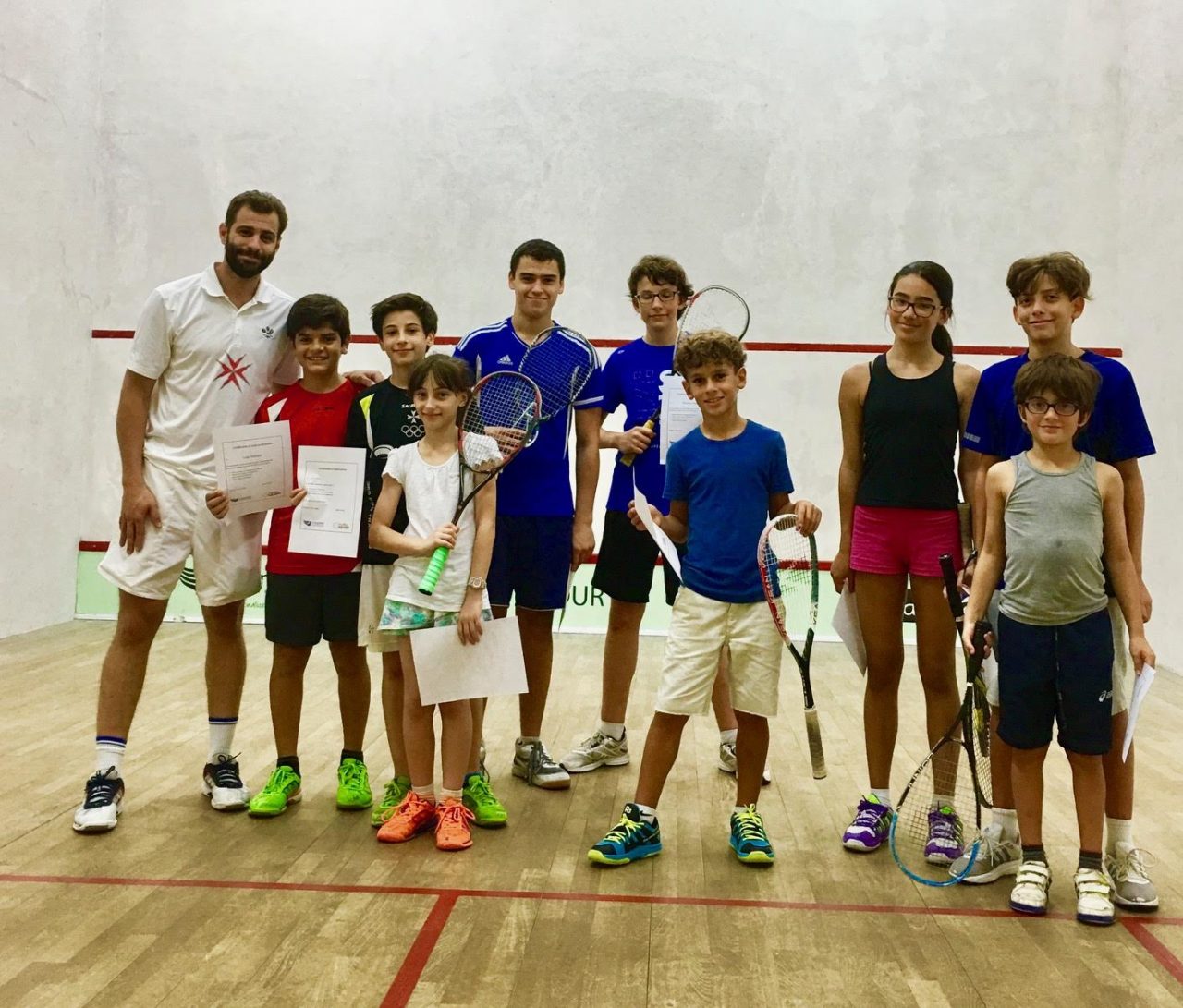 Brad Hindle and some of his pupils in Malta

Gaultier’s golden run is down to being relaxed and confident

Top coach Bradley Hindle is gaining a reputation as one of the best brains in squash. He is in big demand. As well as being Malta’s national coach, he has recently launched his own academy and his growing reputation has led to work in Russia, Sweden, Israel and the USA.

He and his lovely wife Kate have a beautiful apartment overlooking the harbour in Birgu, where, away from squash, Brad enjoys scuba diving and a superbly relaxing Mediterranean lifestyle.

We always have great chats about squash and I thought it was time we put some of his thoughts together for Squash Mad readers.

The top of the men’s PSA rankings is a fascinating subject to begin this chat, with Mohamed ElShorbagy giving way to Gregory Gaultier and now Karim Abdel Gawad. Gaultier is clearly enjoying the best form of his life, making the Bellevue Classic title his sixth consecutive tournament win. What do you put it down to?

I’ve been watching with a interest the tidal changes among the 20 players over the last 12 months, and there is really not much in it. Though with Gregory, his ability and training discipline is quite exemplary. But with his current form he playing with an aura of confidence like one of the great champions that he is, and now he is in the joyride of his career where he plays squash without fear of loss and is enjoying the process of each successful match. 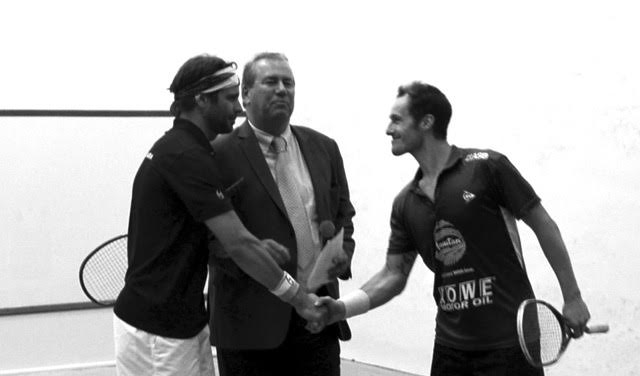 With seven Egyptians in the top 10, each of those players appears to be bringing a different array of talents to the Tour. Which players excite you the most, and why? What are the really special things that set these guys apart?

Egypt is having a dominant run at the top end of the game, evident in both the men’s and women’s rankings. Karim Gawad had a flawless run last year to come almost from nowhere to win the World Open and then to back it up with continue tournament wins to claim the number one spot. That’s a special feat that will be remembered for a long time to come, but he now goes from the hunter to the hunted which is a different pressure to handle. So it will be an interesting year for him to see how he handles it.

Fares Dessouky is phenomenal and the real deal. He is strong, strikes the ball as well as anyone, he is gaining experience with every loss he has with the top ranked players, and he is very hungry for success. I can see him lifting some major titles this year. There is a question on his mental composure at critical moments but I think it’s more just a matter of time before he overcomes this.

As for Mohamed ElShorbagy, he has already accomplished so much and has won pretty much everything except the World Open. He does seem to be slightly down a bit at the moment with his form and tactically his choices could be better, where I thought he could be closing out matches 3/0 he is often being drawn out to five games or even losing them.

Because he had been so dominant and led the peloton for such a long time, naturally his opponents are starting to work out his current game, although he is such a competitor I’m sure he is already working with his coaches to address these areas. And with Marwan, it’s something I said a few years ago with some other coaches and players that one day he will step from being in Mohamed’s squash shadow and be in a position to challenge for the coveted number one position.

Ali Farag and Mo Abouelghar are very dynamic, exciting players who are also contenders for the top five and are putting their hands up to take out top seeded players. Not to ever forget Omar Mosaad and Tarek Momem, who are highly seasoned elite players.

Nick Matthew is still playing great squash at the age of 36. He looks like he is enjoying himself out there, slotting more nicks than ever and clearly relishing the big battles. What are you seeing in his game?

Nick is a class champion, He has been winning in three generations of players where he started with the Lee Beachill/Peter Nicol Palmer/Power era, the Ramy/Shabana era and now MES/Gawad era. His game is probably the most well refined. He is clinically precise and very rarely plays the wrong shot at the wrong time and always gives a textbook demonstration of how a kid should learn the game. I’m not seeing any dramatic changes in his game, only that he keeps maintaining his strengths and keeps refining the work on his very few weaknesses.

In the women’s game, what effect do you think the lower tin has made? Obviously players have had to change parts of their game to cope with this. Who do you see it favouring, and why?

The women have adapted very well to the change, and the change probably could have happened earlier on. It does seem to be favoring high tee position players that are positively moving forward with precision. Nour El Sherbini is the best example of that and she makes the game look effortless. Originally I thought it would benefit smaller, faster females but that doesn’t seem to be the case. The players with the highest winning percentage are playing positive, aggressive squash. And these are players who produce a brand of squash that makes for spectacular audience viewing.

You are busy with your Academy in Malta. How is it developing?

It’s going well, thanks. I set up the BHD Squash Camp and Performance Academy and mainly focussing on junior and professional programmes. There is so much natural talent in Malta and the kids want to learn to get better and have fun. They are improving so many aspects of not only their games but their positive personalities. It’s quite a pleasure to watch the kids grow and develop. I have a couple of talented kids but there is no pressure to win, just learn have fun and let the results take care of themselves. I’m open to any young junior or professional coming to train out of Malta, and it’s a great warm, safe training place, where I run weekly seasonal programmes.

My next clinics are:
1) International junior squash camp from the 4-8 of July and
2) BHD adult squash camp 25-29th of July

I would love to get you over to the UK some time to do a coaching clinic at The Mote. What young British players do you see being able to challenge for a place in the top 20, or maybe the top 10?

Would be a pleasure to get back over to the UK to do some coaching, I’ve been a little out touch with younger British kids coming through. Though I watched a few clips of Declan James and he has quite a bit of talent and potential and looks a lovely player.

Joel Makin is making positive, step by step development and looking to achieve his next step of top 35. I was quite impressed by the raw talent of George Parker and Charlie Lee, for his age, is impressive. These players are just to name a few that I have seen personally. Time will tell how they progress along up the rankings, but they definitely have the ability to.

What do you think of the recent odds of 14-1 for Paul Coll to win the men’s singles gold medal in the Commonwealth Games in Gold Coast next year?

That’s a good question. I think he is definitely a strong chance to take the gold. If I was a betting man I probably would put some money on him. He is a phenomenal, robust athlete, hits the ball very well (probably doesn’t get enough credit for that) and a passionate Kiwi every time he plays (and wins!) in Australia. I think he is right up there as a main contender for the gold.

Thanks Brad. Looking forward to meeting up again some time soon in sunny Malta.