1. The Olympic Bid. For me, the best part of an impressive bid was the way so many outstanding athletes from other sports stepped up to support the squash bid. With backing from superstars like Roger Federer, Andy Murray, Sachin Tendulkar, Andre Agassi, Victoria Pendleton and the England rugby union team, it proves that squash deserves to be on the biggest stage of all. Squash’s leading players provided massive support. Special thanks go to Nicol David and Ramy Ashour, with Peter Nicol and Tim Garner completing a jaw-dropping marathon of seven matches in seven days on seven continents.

2. Ramy Ashour was almost unplayable as he strung together a long unbeaten run that stretched for almost 18 months. Usually playing with a big smile on his face, he entertained audiences all over the world with his unique flamboyant style of play. Loved that air guitar celebration after winning an amazing rally against Gregory Gaultier at the ToC in New York.

3. Shot Of The Year: It had to be that double fake (or was it a triple?) by James Willstrop at the North American Open in Richmond, Virginia. This time Ramy was on the receiving end.

4. What a year it was for Nick Matthew. He won his third World Open in Manchester, he got married to the lovely Esme, somehow found time to write a book (Sweating Blood) and his end of the year surge meant a return to the PSA world number one spot in January 2014. 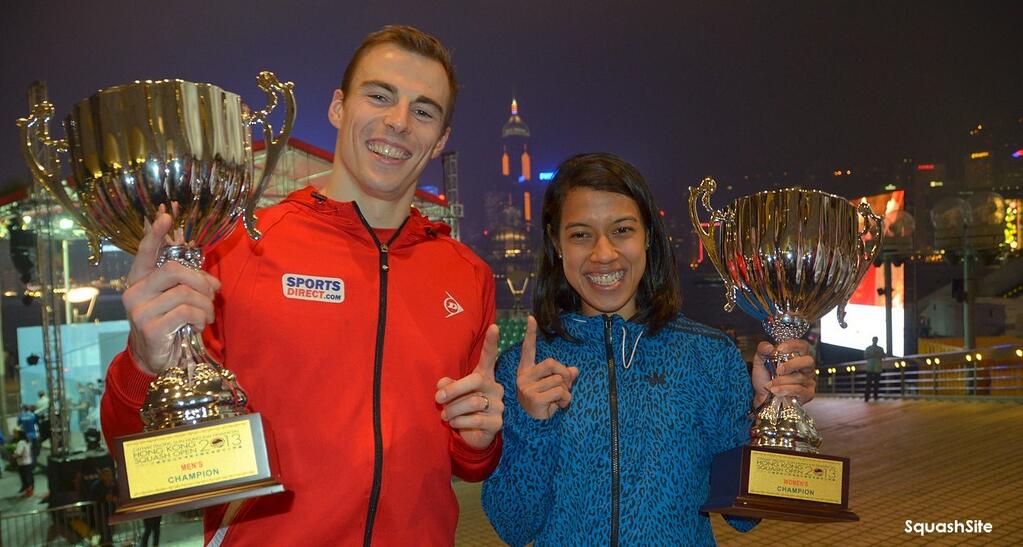 5. Nicol David was again dominant for most of the year in women’s squash. She ended the year with her eighth Hong Kong title, proving what a superstar she is throughout Asia.

6. However, Nicol didn’t have it all her own way in every tournament. Laura Massaro earned a hugely popular triumph in the British Open final at the KC Stadium, rising to the occasion, playing brilliant squash and holding her nerve to overpower the outstanding women’s player of the past decade.

7. Still with the women, there was great celebration following the decision to award equal prize money at the US Open. We look forward to seeing how many tournaments follow suit in 2014.

9. The launch of Squash Mad was like a “breath of fresh air” in the game, said one leading pro. We had many emails of support from players, squash brands and fans all over the world as we broke the cosy, comfortable and complacent approach to media coverage of our great game.

10. It was 10 out of 10 for Canary Wharf, the Swedish Open and the North American Open as all three tournaments celebrated a decade on the PSA World Tour calendar. Despite a global recession, these three tournaments followed the longer-running Hong Kong Open and the Tournament of Champions in delivering high-quality entertainment in great venues. Shame one will be disappearing temporarily in 2014. 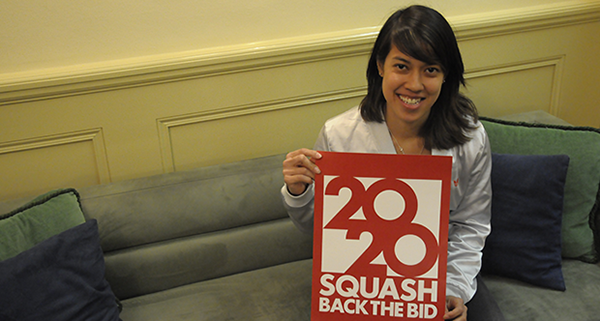 1. The Olympic Bid. Such a shame that the IOC broke their own promise to introduce a new sport to the 2020 programme when they bizarrely removed wrestling from the event and then allowed them back into the voting process. With most of the wrestling medals in London 2012 won by the USA and Russia, we stood little chance of toppling two of the world’s super powers and their immense lobbying muscle. Especially when Putin told all of the old Soviet satellite states to vote for wrestling. It would be naïve to think that the USA behaved differently.

2. The British Open fell foul of the weather when the event was staged out of doors on the football pitch at the KC Stadium, home of Hull City FC (which is owned by Open sponsor Assem Allam). The early rounds were disrupted by rain falling between the stands and the court, and later in the week there were visibility problems as the sunlight caused massive reflections on the glass court. 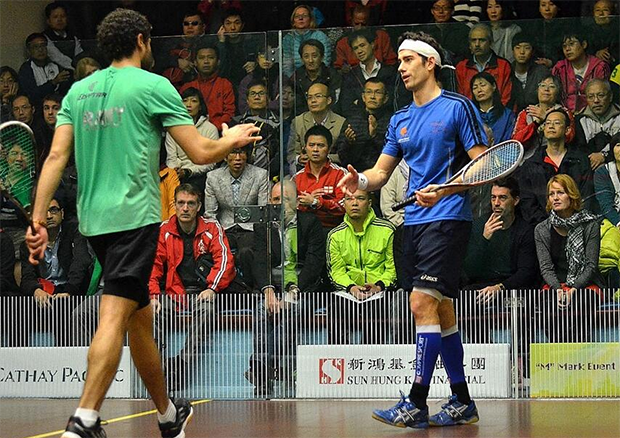 3. Ramy Ashour’s injury problems brought an end to his unbeaten run in his World Open semi-final against Nick Matthew. He returned to action in Hong Kong but retired in the quarter-finals against Borja Golan (pictured left). Ramy has pledged to compete in the Tournament of Champions and the Swedish Open early in 2014 and the squash world hopes his body will hold up, especially that dodgy hamstring.

4. It was a year of much gnashing of the teeth for WSA members as management problems overshadowed the tournament schedule. The biggest disappointment was the failure to stage a World Open in 2013. We expect some fireworks at the forthcoming AGM.

5. The spectacular staging of the World Championship was followed by the cancellation of the 2014 World Series Finals, with the announcement coming just seven weeks before the event was scheduled to take place at Queen’s Club in January. Naturally, considerable speculation surrounds the future in squash of event backer Ziad Al Turki.

6. The saddest story of the year was the news of three deaths in as many weeks that ripped the heart out of the Canadian squash community. RIP Adrian Dudzicki, Mark Sachvie and Riley Mercer.

7. The gulf that exists between certain players and referees was illustrated by events in the Qatar Classic and one particular PSL match in England. On and off court, unacceptable behaviour is simply…unacceptable.

8. Similar stories emerged from the US Junior Open, where disrespectful behaviour by children and parents disappointed and undermined the organisers of the world’s biggest junior event. We need a framework where children, and their parents, are taught to respect every facet of this great game. Federations and coaches need to take the lead.

9. Big turn-off: the failure by the BBC to recognise Nick Matthew’s achievements in the Sports Personality Of The Year Show.

10. Big dust-up: Scottish Squash’s fallout with the management team of the 2014 Commonwealth Games in Glasgow. Let’s hope the problems are ironed out before next summer.

Previous articleGilly Lane: All we want for Christmas is a healthy Ramy
Next articleNicol offers timely advice to Malaysian juniors