Alan’s Blog: On the BBC with Danny Lee

Alan Thatcher November 2, 2016 No Comments on Alan’s Blog: On the BBC with Danny Lee 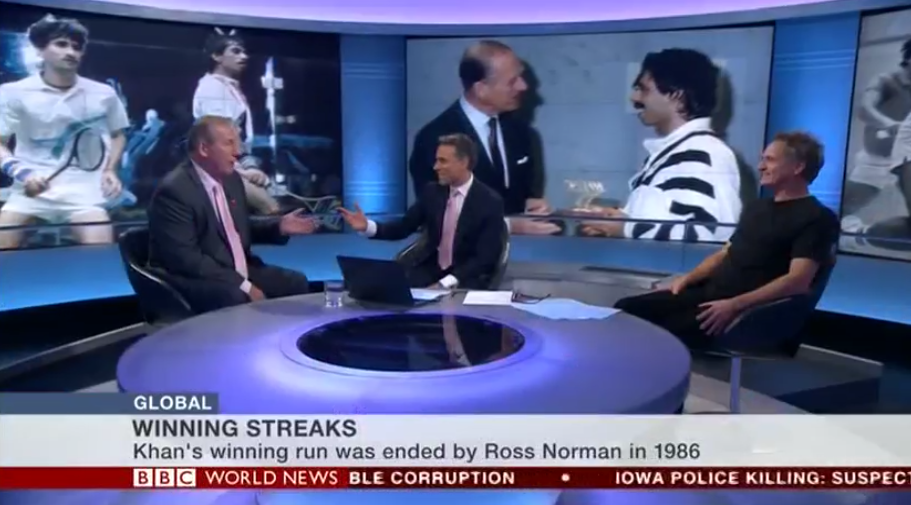 In the BBC World News studio with Matthew and Danny

My co-author Rod Gilmour was away covering a golf tournament and it was a real pleasure to have Danny Lee alongside me as we were interviewed by the very knowledgeable presenter Matthew Amroliwala on the BBC World News, which apparently has 80 million viewers every day, with a large proportion of them across Asia.

See the video below:

There was no time for nerves as we discussed many of the key issues of the book 555: The Untold Story of Jahangir Khan.

Danny was able to give a special insight, having played the great JK several times on the PSA World Tour.

Danny was able to tell Matthew just how much it meant to share the court with such a phenomenal player. Far from being overawed when your name came out of the draw alongside Jahangir’s, Danny explained that it gave every player the opportunity to test their own capabilities to the full, knowing that you were up against such a supremely talented opponent, and hoping that you might just catch him on a rare off day.

Ross Norman persevered with that positive mindset despite 30 consecutive defeats to the Pakistani maestro and, on one early winter’s day in Toulouse, in November 1986, Ross produced a blinding performance of power and control to not only end Jahangir’s long unbeaten run but also claim the world title.

When the programme was completed, Matthew revealed that he used to play squash himself and is trying to persuade his children to take up the game.

It was a thoroughly enjoyable experience, not just to promote the book, but also to pay tribute to one of the greatest sports champions of all time on a programme that attracts millions of viewers worldwide.