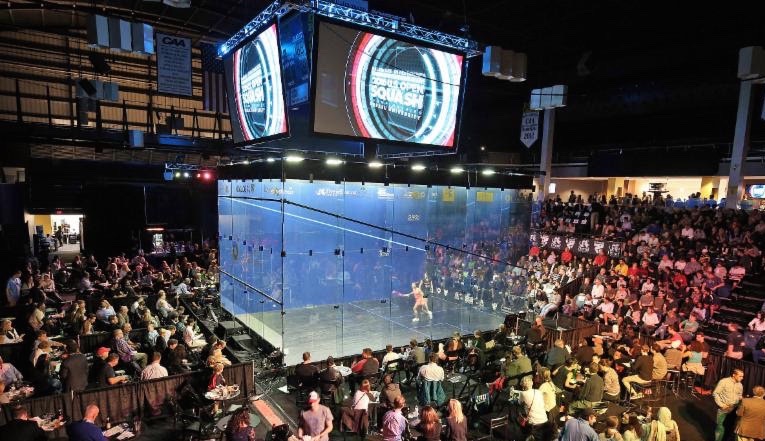 The US Open at Drexel University

The successful delivery of the US Open, with the jumbotron screen above the glass court inside the Drexel University sports arena, the San Francisco Bay Bridge towering over the court at the NetSuite Open, and the spectacular renaissance of the Al Ahram tournament in front of the Great Pyramids, provides a spectacular illustration of how top-class squash can be promoted in style.

These venues provide a magnificent backdrop to the superhuman drama being played out in true gladiatorial style within the confines of the four glass walls.

It goes without saying that the success of these tournaments shows the IOC what they are missing in continuing to ignore the claims of squash for a deserved place in the Olympic Games.

The promotion of top-class squash had already been taken to new levels by the ongoing success of the Tournament of Champions, held inside Grand Central Terminal in New York City, and the Canary Wharf Classic, staged inside the racket-shaped East Wintergarden venue in London’s new financial district.

Both of these events have proved the demand for top-class squash as a popular spectator sport by selling out every ticket, every day, for many years.

At Canary Wharf, we would love to attract a title sponsor to share in that success story.

From Shanghai to Chicago, from Liverpool to London, from El Gouna to Colombia, promoters have created the vision and taken the risk to fund some truly amazing tournaments.

England set the bar high in the 1980s with huge audiences at Wembley Conference Centre and the Royal Albert Hall, with Chichester Festival Theatre and the Churchill Theatre in Bromley among the early venues for glass-court tournaments as advancing technology helped squash emerge blinking into a new era from the restricted confines of a traditional club setting to a new era as a popular spectator sport.

John Nimick has continued the theatrical theme by staging an annual event inside Boston Symphony Hall and Tommy Berden has achieved similar success in the Netherlands.

Next year, of course, the PSA World Series Finals will be held for the first time in the Dubai Opera House (pictured above), providing a superb setting for the season-ending jamboree for the top eight male and female players.

I have my eye on one or two theatres in England that would provide the perfect setting for squash, not to mention comfortable seating for spectators and beautiful bars and restaurants already in situ.

Hopefully, one or two squash-loving businessmen reading this article might share that vision and get in touch.