Guest Contributor September 30, 2020 No Comments on Ali Farag and Marwan ElShorbagy through to World Series semi-finals on day three 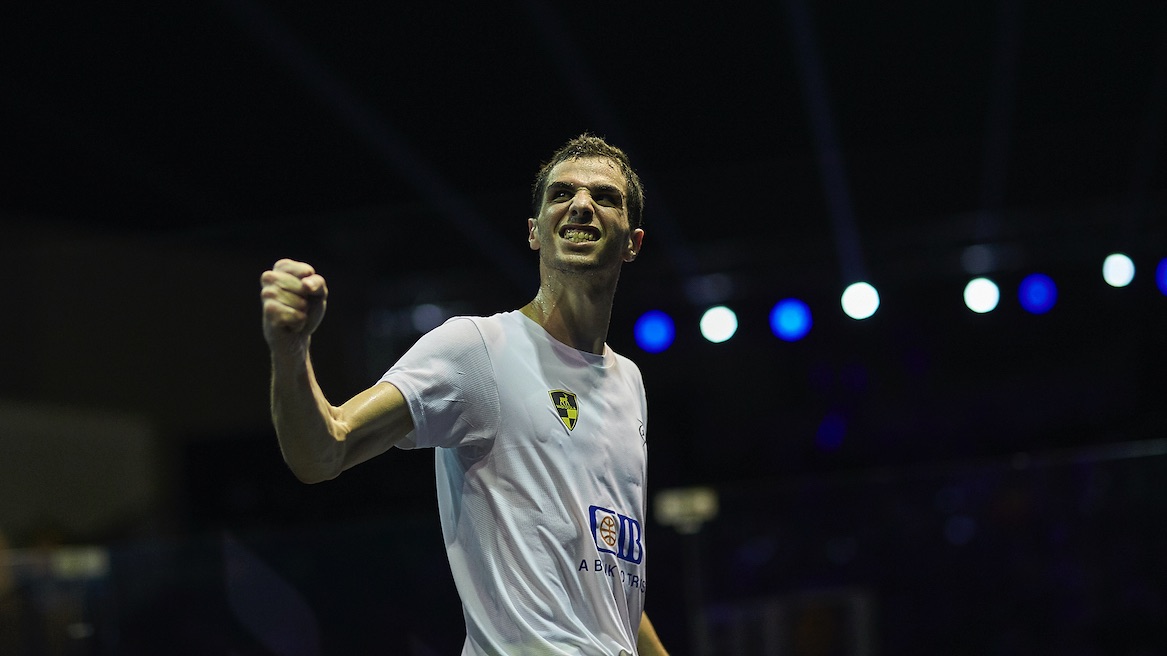 Egyptian duo Ali Farag and Marwan ElShorbagy have become the first men to book their spots in the semi-finals of the CIB PSA World Tour Finals after they beat Peru’s Diego Elias and Welshman Joel Makin at Cairo’s Mall of Arabia.

It was winner takes all in the Group A clash between Farag and Elias after one win and one defeat each, and Elias made the better start as the languid World No.6 found his attacking rhythm early on.

But some lengthy rallies sapped the energy from Elias’s legs and Farag completed back-to-back victories in the second and third games to book his spot in the last four at the expense of his opponent.

“It was very hard and they were very tough conditions out there,” said Farag. “Even when I was 10-8 down in the first, I thought maybe I should just put some work into his legs and it did finally pay off at 1-0 and 5-5. From that point on, I took more control of the match. That was one gutsy performance, I didn’t necessarily play the best squash, but I was talking to my mum yesterday and she gave me the confidence that I have it in me. It is her birthday today tomorrow so I just wanted to send her a message.

“The crowd made a big difference today. We are lucky to have a lot of tournaments in Egypt, mostly thanks to CIB. Today I was really looking at my brother. Ever since I was very young, he was the guy I was looking up to and behind the glass, when he is here, he gets all my attention.”

Defending champion Karim Abdel Gawad and Germany’s Simon Rösner will face off in the final Group A fixture tomorrow, with the winner joining Farag in the semi-finals.

In Group B, ElShorbagy followed up yesterday’s win over New Zealand’s Paul Coll with an 11-8, 11-6 win over Makin to seal his semi-final spot at the World Tour Finals for the first time.

The World No.7 is appearing at this event for the first time since the 2016-17 season and he made it two wins out of two after a tactically accomplished performance.

“I am really happy with the way I dealt with the conditions today. It was really slippery and I had to deal with my movement,” ElShorbagy explained.

“I am happy to win in two games against a very tough opponent and just really happy with the way I am playing. I have worked really hard this summer so results like this don’t surprise me. Maybe the way I played in Manchester [in the semis] was disappointing, so I am looking forward to improving on that here.”

Coll made it back-to-back wins over World Champion Tarek Momen to send him out of the tournament and the Kiwi will go up against Makin in the final day of group stage action tomorrow – with a place in the semis up for grabs.

There are still three semi-final places on offer in the women’s event, with Egypt’s Hania El Hammamy moving into pole position in Group B courtesy of a 2-0 win over United States No.1 Amanda Sobhy.

A 12-10, 11-8 victory has put her within touching distance of a place in the semi-finals after moving onto seven points in the group. The 20-year-old sits two points ahead of second-placed Serme and will qualify for the semi-finals with anything other than a 2-0 defeat to Nour El Tayeb in her final group match tomorrow.

“I tried not to think much about the match, but I wanted to win in two if that was possible,” said El Hammamy.

“The first game was very crucial, Amanda was leading and then I found my game and it was really tough from the first. I love playing in Egypt in front of this crowd, my coaches, my family and my friends are all here, so it’s always special playing in Egypt.”

World No.3 Serme avenged her defeat to El Tayeb in the Manchester Open final eight days ago after an immaculate performance carried her to a 2-0 victory over the World No.4.

Any win for Serme over Sobhy tomorrow will see her qualify for the last four. “Yesterday was a pretty tough match, so today I wanted to stick to my tactical plan and I think my coach will be happy at home,” said Serme.

“I didn’t do much wrong tonight, I think, and I stuck to that plan, so I’m really happy about it. I will prepare [for the match about Sobhy] like I did for the other ones. I’ll have a good recovery with the physio now and will have a chat with my coach tonight and we’ll prepare for the match tomorrow with some video [analysis]. Then I’ll rest and get ready.”

Meanwhile, in Group A, World No.2 Nour El Sherbini continued her 100 per cent record so far as she dismantled England’s Sarah-Jane Perry to finish the group on 12 points. World No.1 Nouran Gohar and Joelle King will play-off tomorrow in a bid to join El Sherbini in the semi-finals.

The group stage of the CIB PSA World Tour Finals continues tomorrow and play begins at 18:00 (GMT+2). All six fixtures from the Mall of Arabia will be broadcast on SQUASHTV (rest of world), Eurosport Player (Europe only), ON Sport (Egypt) and the official Facebook page of the PSA World Tour. 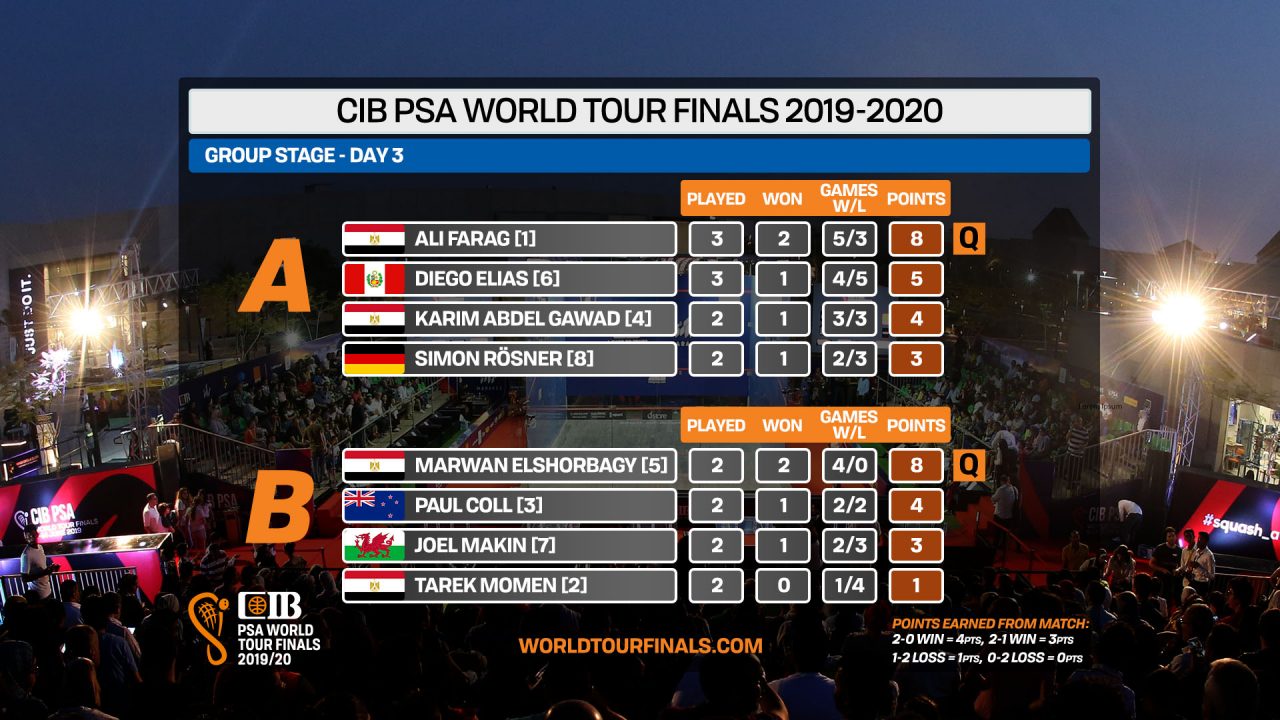 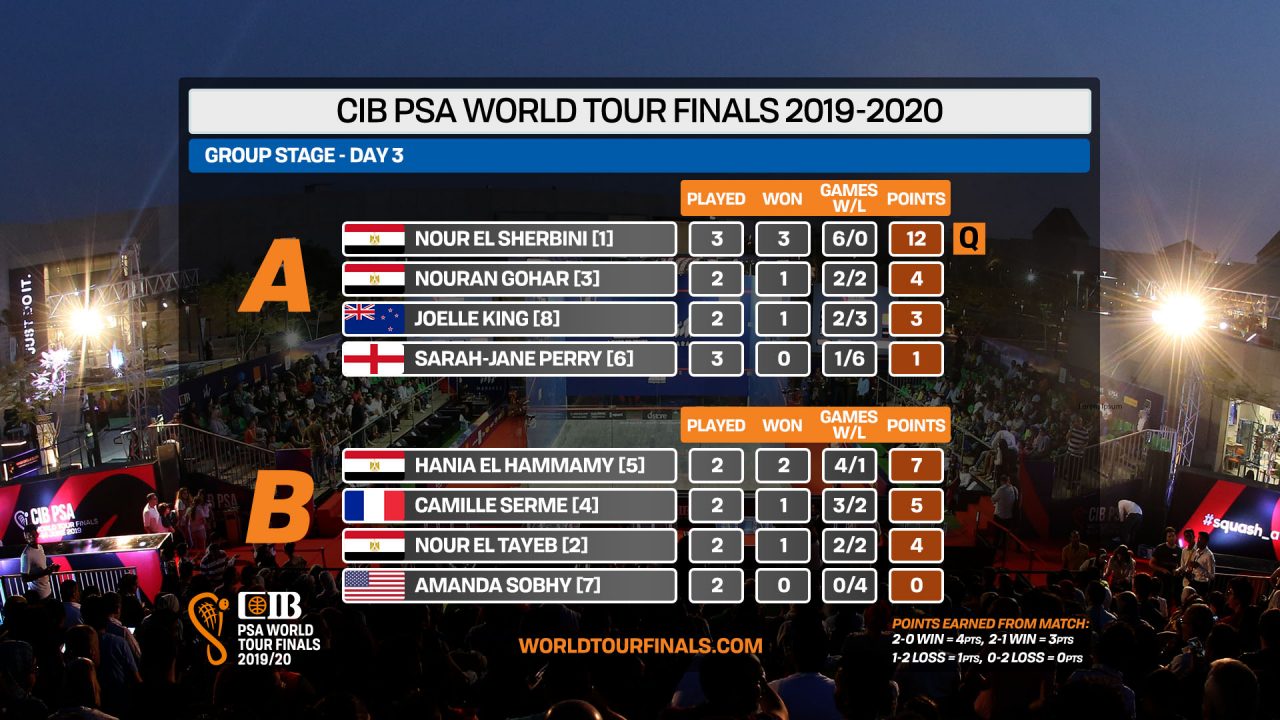