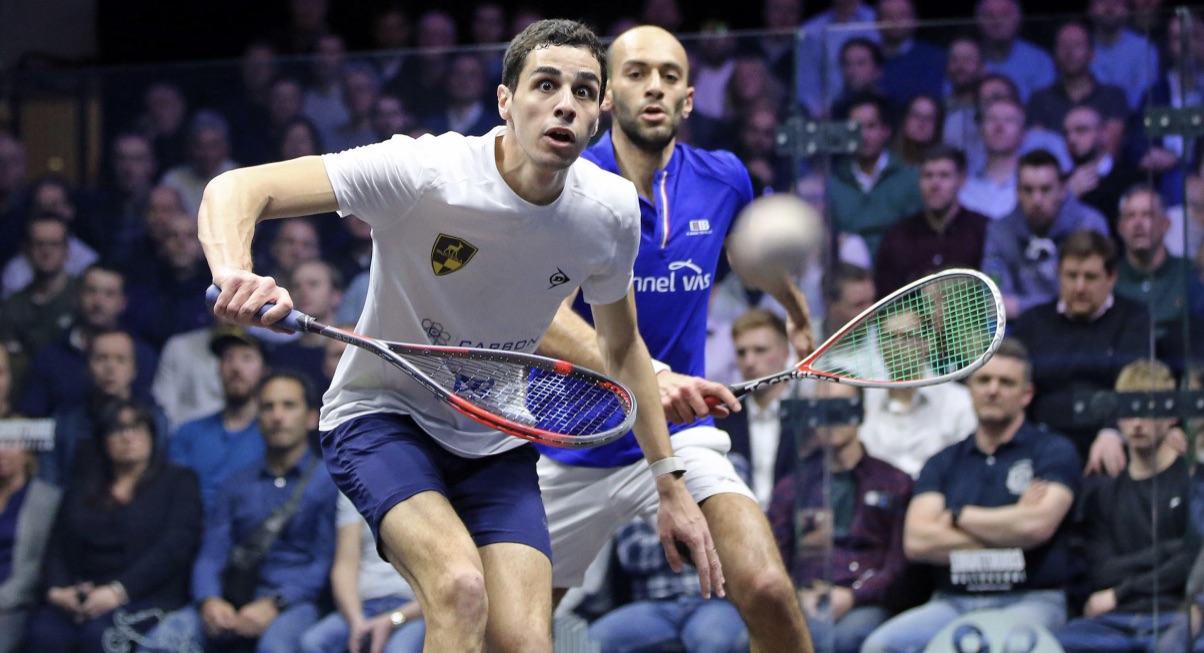 Egypt’s World No.1 Mohamed ElShorbagy and World No.2 Ali Farag both look to be in top form as they prepare to meet in the final of the St. James’s Place Canary Wharf Classic after defeating compatriots Tarek Momen and Marwan ElShorbagy in the semi-finals of this PSA Gold tournament in London.

A packed crowd at the East Wintergarden created an electric atmosphere as the four Egyptians battled for a place in the final.

The first match was the ultimate showdown in squash, the world champion Momen meeting the world number one.

Momen’s last victory over ElShorbagy had come here in the Canary Wharf semi-finals 364 days previously, but ElShorbagy had won their five subsequent meetings, three of them in tournament finals.

World No.3 Momen looked more focused as the players adapted from a best-of-three format to the longer, traditional, best-of-five structure. He seemed to be in a happy place with his movement looking smooth and his skill in the front corners providing numerous challenges for his fellow Egyptian.

ElShorbagy, who won this event in 2018 when he beat ‘the Viper’ in the final, improved his game in the second, pushing the tempo, attacking with pace into the front corners and forcing Momen into the type of errors that have plagued his game in recent years.

Looking on, you felt that ElShorbagy actually may prefer the full-on attacking style of the best-of-three game. He was not a big fan when we first launched the experiment. Here he looked a little passive at the start, but he came out for the second game in attacking mode and dominated the rest of the match.

He built a rhythm and momentum that enabled him to pick off winners at vital moments. Momen did not help by hitting the tin on several occasions but much of that was down to ElShorbagy driving the ball towards his opponent’s body rather than opting for the “good width” that most coaches try to impress on their pupils, which often ends up in feeding a simple volley kill.

The body shot catches players off guard, and often off balance, even at this level.

ElShorbagy enjoyed the comfort of a substantial lead in the third and fourth games as he went on to win 4-11, 11-7, 11-4, 11-6 in less than 50 minutes, booking his place in the final in Canary Wharf for the second time in three seasons.

He said: “I hope everyone enjoyed that match, because we both played such high quality squash. We always play great matches, and I remember two years ago when we played in the final we both gave it our all on court and today we did the same.

“I absolutely love coming back here. Since the first day, the crowd is always full and you guys always support this event. It is because of you that we put the effort in, and we really appreciate it, so thanks a lot!

“The last couple of days, it was so high-paced. We went for more winners, whereas today we were more economical. We had to manage our fitness. There are more tactics in a best-of-five, and I am really glad to be here for another day.

“Tarek has been in great form this season. After the final in TOC [J.P. Morgan Tournament of Champions], he said that he was on the right track. Having to play someone who feels like that is always hard.”

ElShorbagy will now face World No.2 Ali Farag after the 2018-19 world champion made the final for the first time in his career, following a comprehensive victory over World No.8 Marwan ElShorbagy, Mohamed’s younger brother.

Marwan has enjoyed a good record against Farag over the years, but this time the former Harvard student needed just 39 minutes to complete his task.

To be fair to the younger ElShorbagy, Farag was almost impossible to play. After scraping a tight drop shot back into play from one of the front corners, he recovered his position so quickly that when his opponent hit the next ball into what he thought was an open space on the opposite side of the court he found Farag waiting there, ready to extend his long arm and strike a simple, soft, volley drop. Like an assassin’s knife wrapped in a velvet glove.

That kind of sequence puts doubt in any player’s mind. Such was Farag’s domination that his opponent, an intelligent, artistic player, rattled the tin on a few occasions as he ran out of options.

Farag saves energy with his deft flicks to a length. He reads the game so well that he is almost in place before his opponent has struck their shot. He was able to restrict ElShorbagy to just 11 points across the entire match thanks to a smothering policy of containment.

Farag will now feature in the final at Canary Wharf for the first time in his career, in what is only his second appearance at the tournament.

When I asked him if he is playing the best squash of his life, he replied: “I would like to think that I can still get better. Today I went on court with a mix of emotions. I was inspired by my wife Nour. She just won a thriller of a match in Cairo, at the Black Ball Open, against an unbelievable player in Raneem El Welily.

“I was super inspired but at the same time I was also super intimidated to see Nick Matthew in Marwan’s corner. Nick, way beyond his prime years, gave me a lesson at the U.S. Open. I know that from the outside, he can give the right tactics.”

Looking ahead to the final he added: “Even though Mohamed and I are No.1 and No.2 at the moment, we have only played twice so far this season. We have won one each and I think it is always exciting when we play against each other.

“He is totally different to play compared to Marwan, but it is equally as tough. It will be another test but for now, I will just enjoy the result and then focus on tomorrow.”

Pictures by STEVE LINE (courtesy of PSA) and PATRICK LAUSON