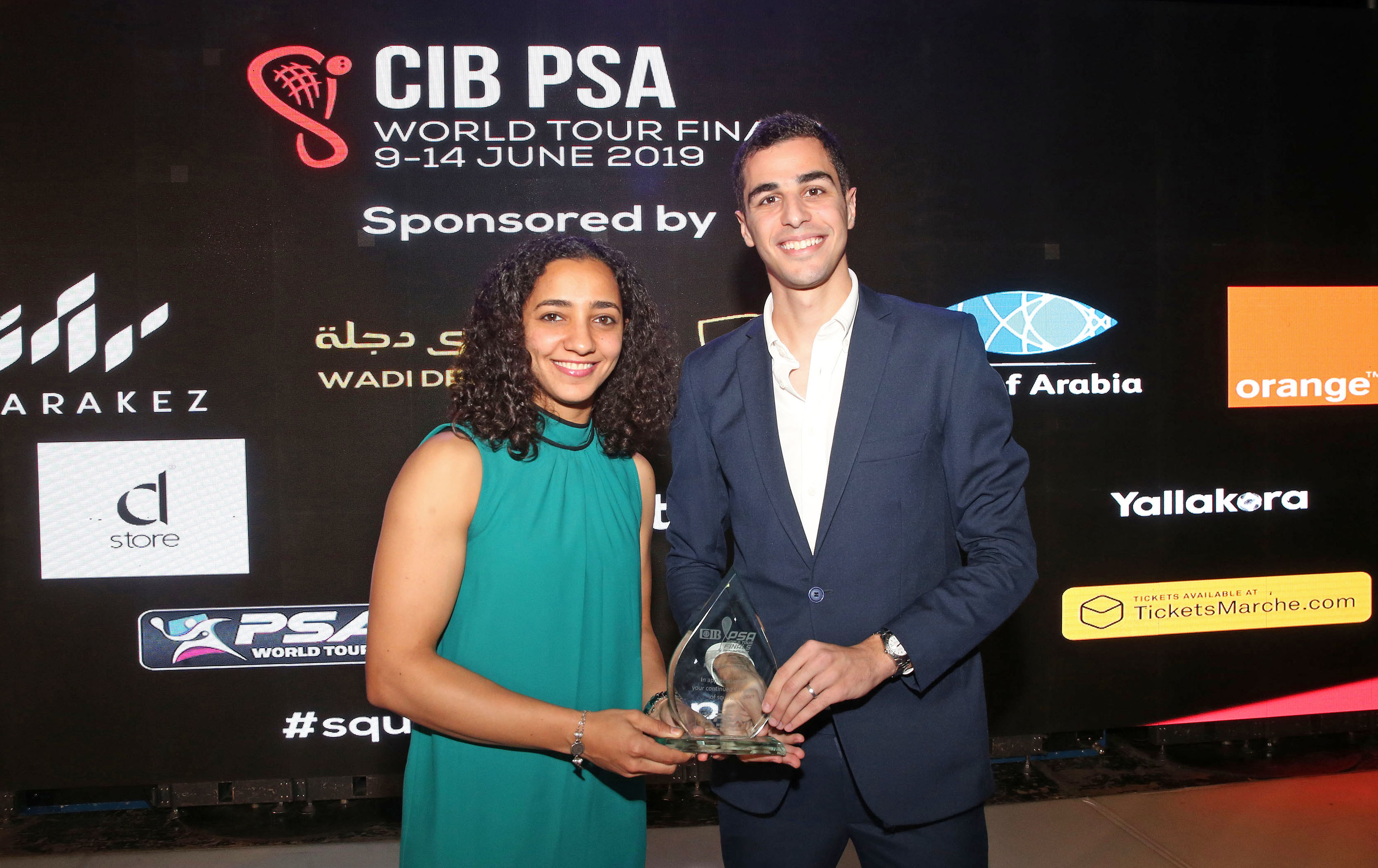 The PSA Awards dinner took place on the eve of the 2018-19 CIB PSA World Tour Finals, the PSA World Tour’s season-ending tournament, where Farag and El Welily will feature as the No.1 seeds in the men’s and women’s events.

Farag picked up the PSA Men’s Player of the Year award courtesy of a superb season that saw him become World No.1 for the first time, overtaking 2018-19 Player of the Year and compatriot Mohamed ElShorbagy – and claim six titles, including the PSA World Championships.

The man Farag beat in the World Championship final, Tarek Momen, came second in the voting following a fine season in which he reached a career-high ranking of World No.3, won two titles and reached a further three finals.

New Zealand’s Joelle King finished as runner-up for a second successive year after a season that saw her win her maiden PSA Platinum title at the Hong Kong Open, while she also took the honours at the Manchester Open in May.

Farag and El Welily also took home the men’s and women’s PSA Spirit of Squash Awards. The award is voted for by PSA players and is presented to the players who best demonstrated true sportsmanship during the season. It is the third year in a row that El Welily has taken the honour, while Farag claims the men’s award for the third time in four years.

The PSA Men’s Shot of the Season Award went to France’s World No.60 Baptiste Masotti, while Farag’s semi-final battle with New Zealand’s Paul Coll at last month’s Allam British Open was named the PSA Men’s Match of the Season.

The evening’s other award went to PSA Event Director Tim Garner, who was presented with the PSA Services to Squash award. The award, presented by the PSA Foundation, came in recognition of his outstanding commitment and service to the sport over the past 12 months.

Garner, a former World No.26, has been the mastermind behind the popular Canary Wharf Classic since the event began in 2004, while he also served as Tournament Director at the sport’s biggest tournament – the PSA World Championships in February – as well as the British Open and Manchester Open this season. Garner also climbed Mount Kilimanjaro in March, earning almost £1,000 for the PSA Foundation in the process.

Garner, who was instrumental in helping showcase the sport at the Buenos Aires Youth Olympic Games in October, will also act as Tournament Director for the World Tour Finals, which takes place this week at Cairo’s Mall of Arabia between June 9-14.