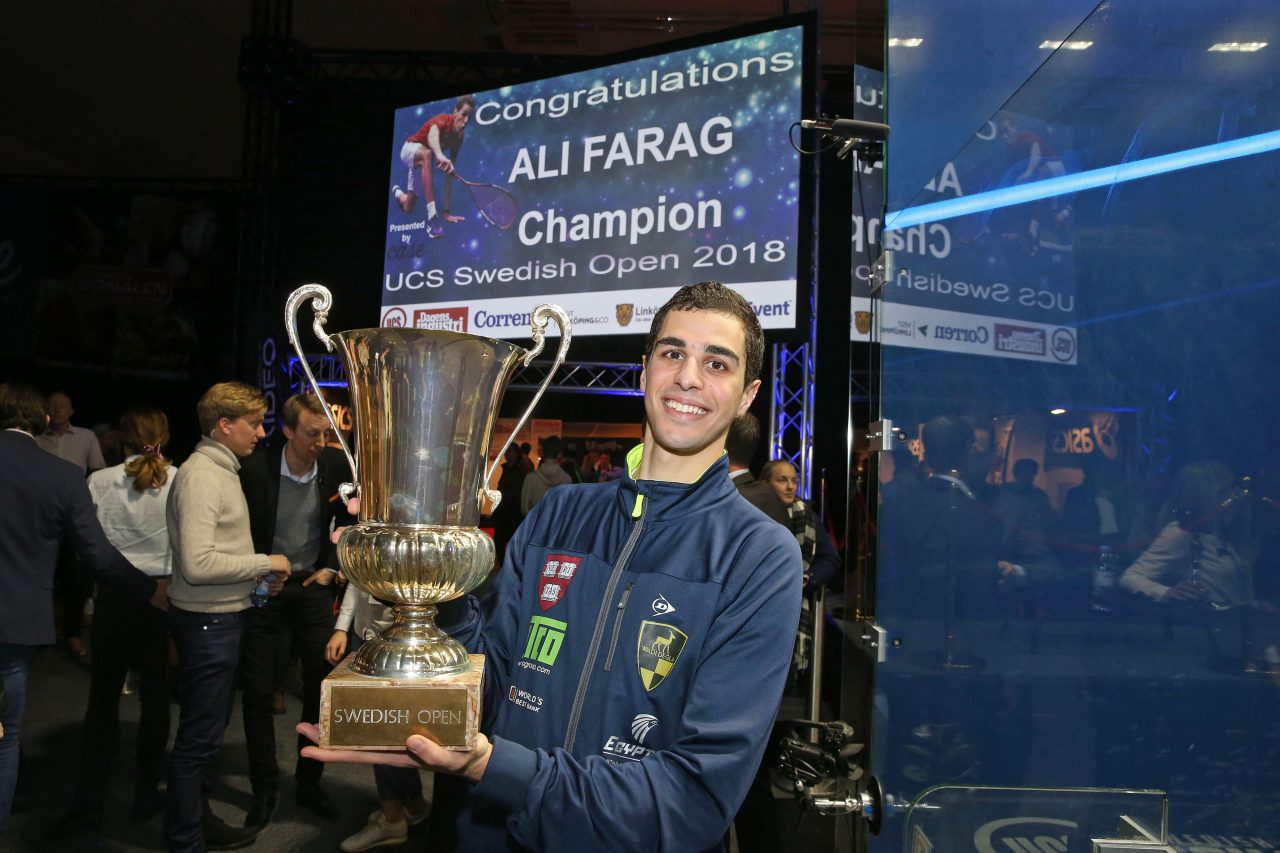 Egypt’s Ali Farag, the World No.3, won his first PSA World Tour title since October 2017 courtesy of a 3-1 victory over in-form Simon Rösner in the final of the 2018 UCS Swedish Open in Linköping, Sweden.

Farag last tasted title success when he triumphed at the U.S. Open to win the first World Series title of his career, but capped off a sublime week that saw him return to his best form in Sweden with a comfortable victory over Rösner – preventing the German from adding the Swedish Open to the Tournament of Champions crown he collected last month.

The 30-year-old Rösner started strongly, looking to pick up on where he left off following an impressive semi-final defeat of Tarek Momen. But ultimately he came up short as 25-year-old Farag began to turn the screw, exerting consistent pressure that eventually sapped the energy from Rösner and paved the way for a victory that came after 51 minutes of action.

“I’m over the moon to have won the title here at this great event,” said Farag. “I’ve heard great things about this event for years and it exceeded all my expectations. It has been a great event.”

The battle was highly anticipated, with both finalists coming into the match in a rich vein of form.

Rösner’s route to the final started off in challenging fashion and he struggled at times in the first round against Declan James. He then took a very comfortable 3-0 win against the Englishman Daryl Selby and showed very fine form and a good portion of confidence in yesterday’s semi-final win against Tarek Momen. Rösner had prior to the final played a total of 181 minutes.

Farag’s way to the final had been slightly different, having played only 123 minutes in total after winning his first two matches in straight games against Joshua Masters and James Willstrop. And he then played a hard 66-minute semi-final against Paul Coll yesterday. The world No.3 had been looking very sharp in all three of his matches and has been enjoying his Swedish Open debut.

The first game started off, as usual, with a number of long rallies, Rösner played aggressively, but the very athletic Egyptian managed to answer almost every attempt from Rösner and returned with a succession of drop shots that the big man Rösner couldn’t reach. Farag controlled long phases of the first game and won 11-7.

In the second game, Rösner found his rhythm and precision and managed to take advantage of that to make sure Farag couldn’t reach the ball as easily as he did in the first. He went on to win the game 11-6, and also included a contender to shot of the month with his jumping volley-shot at 7-5 that made the crowd go crazy in Linköping.

in the third, the momentum shifted back to Farag. He found his first game touch again and dominated from the start and really showed the spectators why he is ranked three in the world.

Rösner went for a push late in the game, but Farag gave him nothing and won the game 11-3.

The fourth game continued in the same style as before. Rösner tried his best to play aggressively and to force Farag to cover a lot of distance, and a Farag who had the answer to almost all questions that Rösner was asking. Rösner looked determined to not let Farag ruin his dreams of a Swedish Open title at his 12th attempt.

The German played with massive desperation and for a while looked like he would manage to force the match to a fifth and deciding game. Unluckily, Rösner started to play a little sloppily and the Egyptian made him pay. Farag was also awarded two strokes when Rösner grew tired and, after 52 minutes of squash, he secured his first Swedish Open title at the first attempt. This was his 11th PSA title in total.

In the winning interview after the match, Farag thanked a lot of people and everyone who supports him, and he also said the following about the final: “Simon is of my best friends on tour. We play in the same team in Germany as well. I’ve spent more time with Simon than with my wife recently.

He continued with a generous and grateful description of his thoughts on his Swedish Open debut, adding: “I would like to thank Freddie Johnson and his team. I’ve heard some great things about the tournament and that’s why I came here. It has been beyond all expectations it’s been a great event and I hope to be back next year as well for sure.”

This year, for the first time, a fair play prize was also handed out during the Swedish Open. The award went to New Zealander Paul Coll for his great sportsmanship during the tournament.