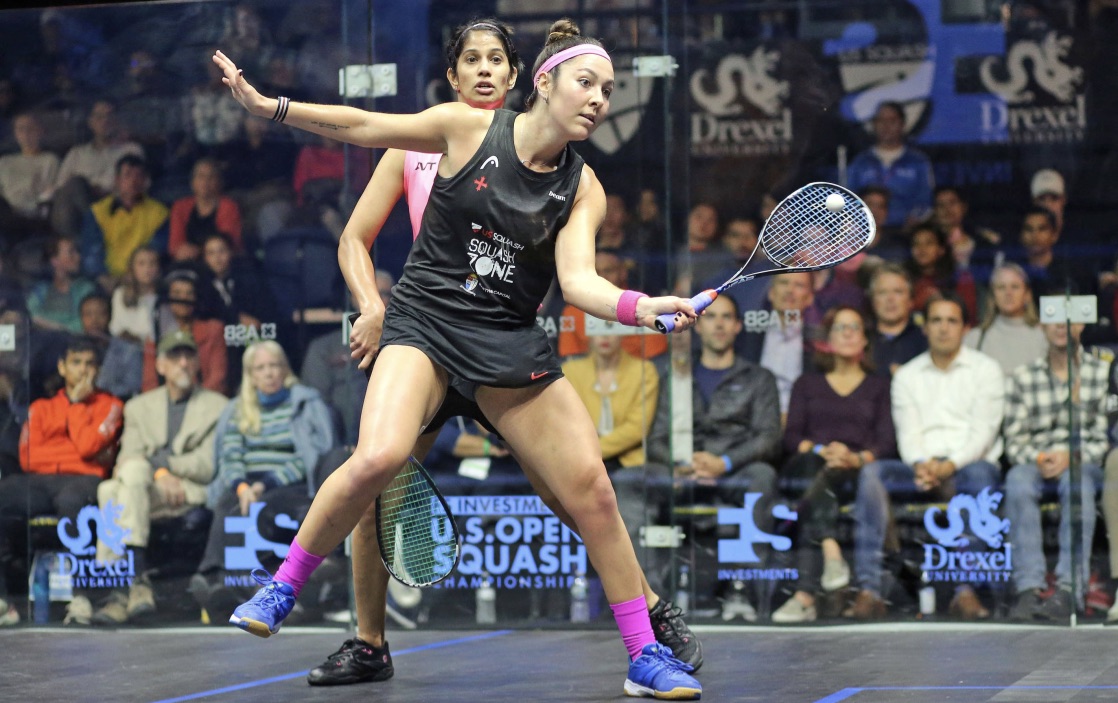 Amanda Sobhy gets in front of Joshna Chinappa 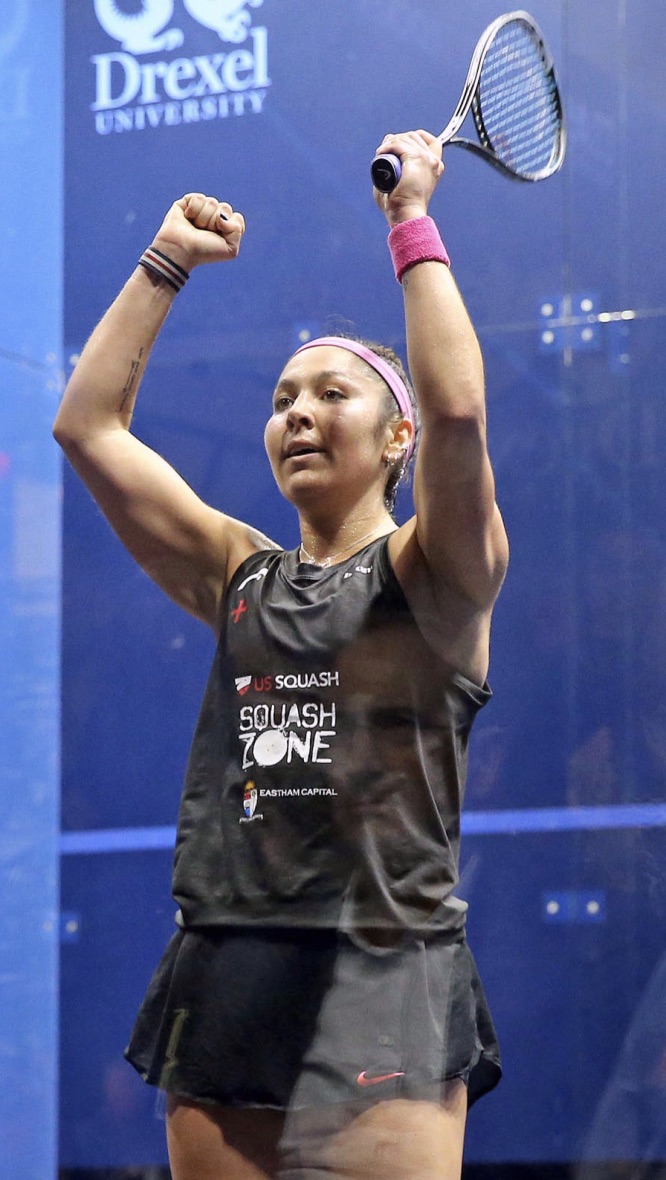 Sobhy is the only remaining US player in the draw and had been struggling with an adductor injury in the build-up to the event – pulling out of the Oracle NetSuite Open a fortnight ago – while the injury still looked to be troubling her during her second round fixture with fellow American Olivia Fiechter.

However, the Boston-based Harvard-graduate looked far more comfortable on court against Chinappa as she blew the World No.12 away in games two and three after sneaking a win in the opening game.

She will play No.2 seed Camille Serme in the next round, a month after losing to the Frenchwoman in the Open de France final.

“The whole point of pulling out early in San Francisco was so I could compete at this tournament,” said Sobhy afterwards.

“I might not be where I want to be injury or health-wise, but I’m pretty pleased with my performance. I know how deadly Joshna can be, but my second round match gave me some confidence and I know that I can still play and move even if both legs aren’t fully functional. I’m really happy with today.

“I think both Camille and I played really well in France and it was probably some of the hottest conditions that we’ve ever played in. Even though I lost that, it’s a battle I will remember and it gives you confidence that you can play at that level, but hopefully third time is the charm against her.”

Serme, the 2016 U.S. Open champion, was up against Hong Kong’s Annie Au a year on from beating her in straight games at the same stage of last year’s tournament and, while she dropped a game this time around, the 30-year-old dominated for large periods of their 36-minute fixture. 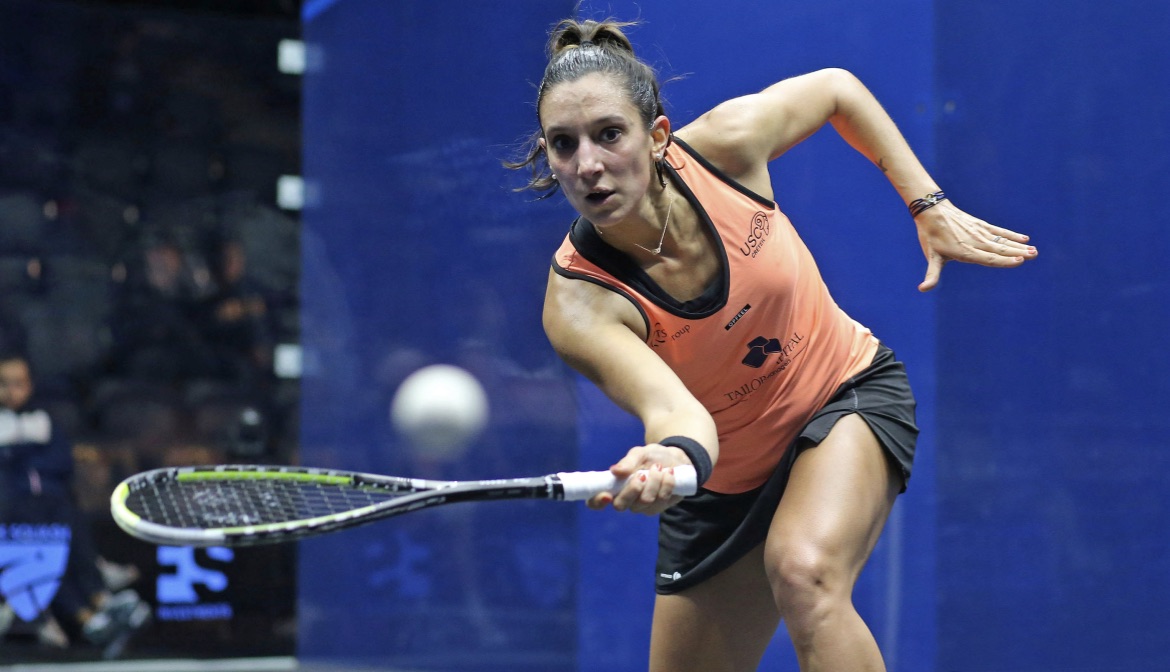 “Annie’s always tough to play, she has a type of game where she is lobbing and dropping really well,” Serme said.

“She did it really well in the third and I lost a bit of my focus as well, so I really wanted to get a good start in the fourth. She slowed down the pace and I like to play fast, so it’s a different tactical game, but it’s always good to have different types of games on the tour.”

World No.9 Tesni Evans and World No.5 Nouran Gohar were the other players to win on day four, with comfortable victories against Joey Chan and Salma Hany, respectively. Evans and Gohar will now go head-to-head for a place in the last four. 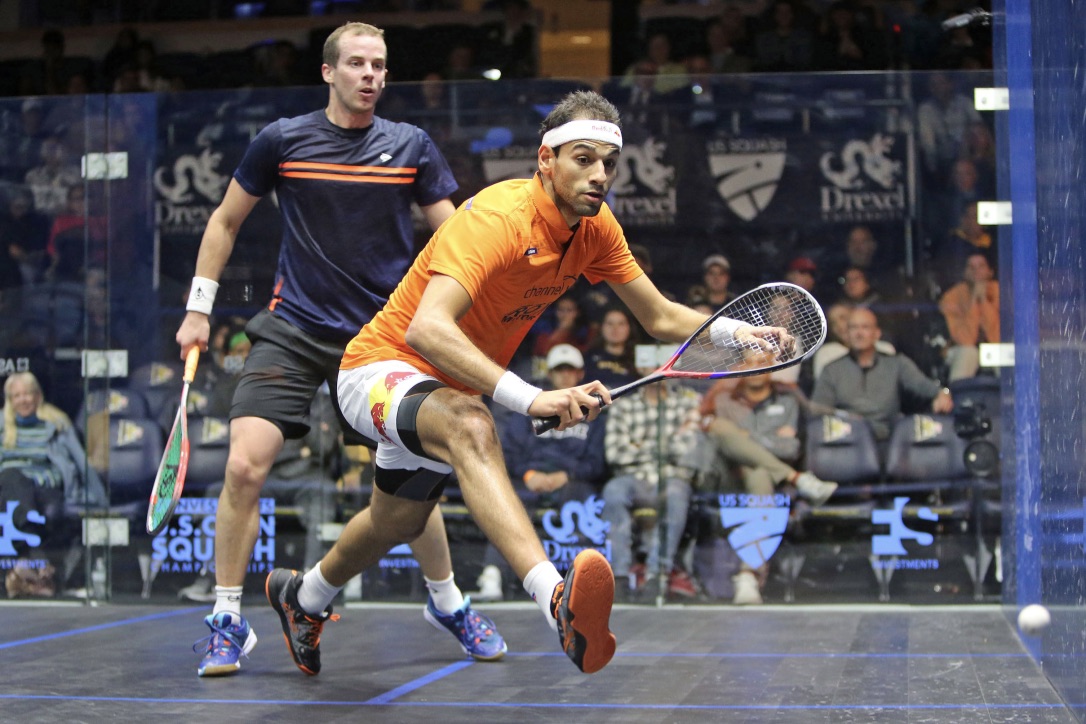 In the men’s event, defending champion Mohamed ElShorbagy advanced to the quarter-finals courtesy of an 11-6, 11-7, 12-10 win over New Zealand’s Campbell Grayson

The World No.2 – still unbeaten this season after title wins at the China Open and Oracle NetSuite Open – will compete in his 10th successive U.S. Open quarter-final and will take on the man he beat in last year’s semi-finals, New Zealand’s Paul Coll.

“I’m really happy to be back here in the quarters, the U.S. Open is one of the most prestigious tournaments on the calendar,” ElShorbagy said.

“It’s a Platinum event and we all aim for these. It’s our [ElShorbagy and Grayson] first time playing against each other and we have even only practised against each other once or twice. He came to Bristol before the British Open in May and he is one of the nicest guys I have ever met in my life.

“Paul has been doing really well and he had a really good end of season, especially his couple of matches with [Ali] Farag [last season] and he obviously kept improving. He hasn’t lost a match so far this season, and I think we are the only two players to have done that so far. Unfortunately one of us will have to lose and hopefully it isn’t me.”

World No.5 Coll achieved his quarter-final berth after coming back from a game down against Egypt’s Mazen Hesham in the day’s standout fixture. The one and only time these two players have met on the PSA Tour came in a five-game thriller at the British Open in May, with Hesham twice fighting back to push the match right to the death before Coll eventually took the win in 74 minutes.

However, on this occasion it was the Egyptian who started the brighter of the two as he took the first game. Coll soon settled into his game plan though to take the second game for the loss of two points before a tight third and fourth also went in the favour of the Kiwi player. 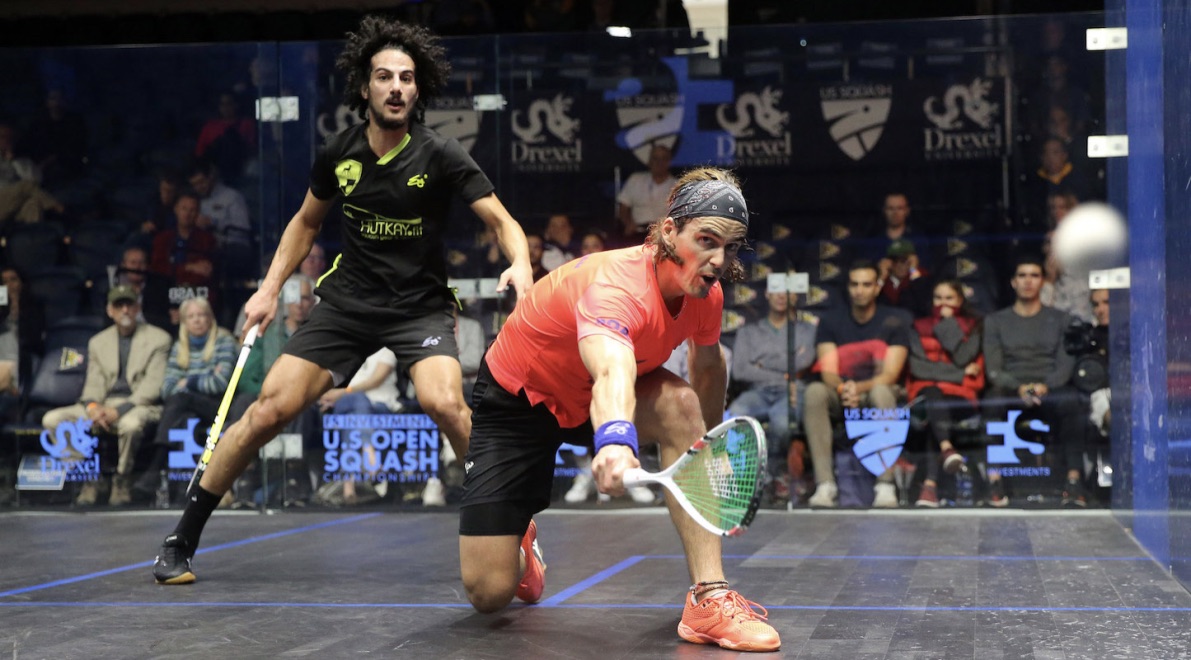 “He makes you feel pretty average on there,” said Coll afterwards. “It’s very hard to settle into any kind of rhythm. I was feeling really good coming into this match in my short game, but he puts you on edge with his skill and racket speed. I’m happy to get through that in four and looking forward to training tomorrow and playing on Thursday.”

Germany’s Simon Rösner also booked his place in the last eight after ousting the tenacious Egyptian Zahed Salem and he will compete against World No.3 Tarek Momen, who put in a composed performance to get the better of Rösner’s compatriot, Raphael Kandra.

The quarter-finals begin on Wednesday October 9, with play beginning at 18:00 (GMT-4). All action will be shown live from Drexel University’s Daskalakis Athletic Center on SQUASHTV (rest of world), Eurosport Player (Europe only) and the official Facebook page of the PSA World Tour (excluding Europe & Japan).

However, the quarter-final fixture between top seed Ali Farag and Colombia’s Miguel Rodriguez will no longer go ahead after the latter was forced to pull out of the match due to a calf injury. Farag receives a walkover into the semi-final.