Alan Thatcher July 30, 2020 No Comments on Anil Nayar, one of the best amateur players of all time 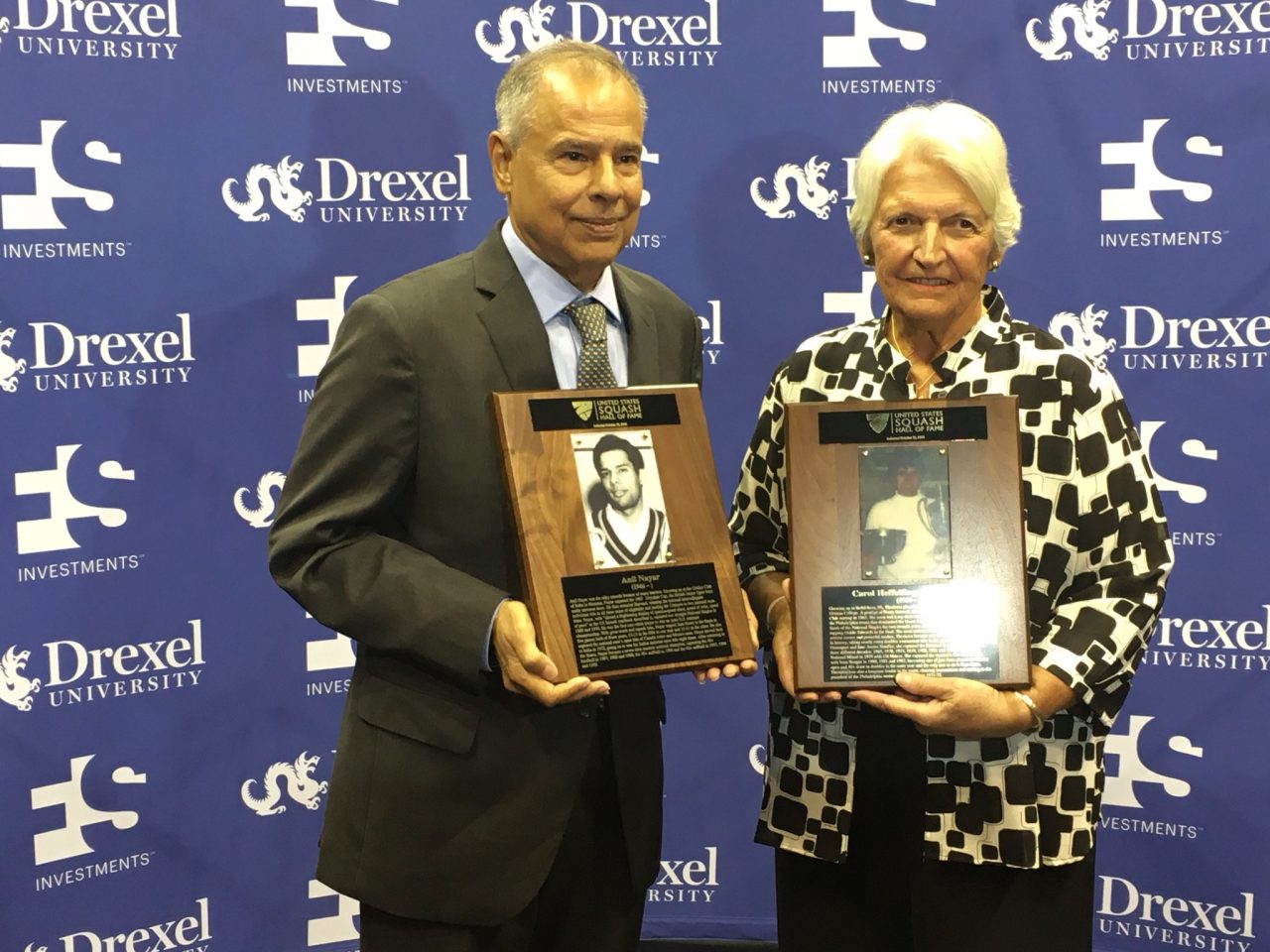 Anil Nayar is inducted into the US Squash Hall of Fame on his 72nd birthday on World Squash Day at the 2018 US Open, alongside fellow inductee Carol Thesieres

I was expecting a book about squash. But the life story of former Indian and American national champion Anil Nayar is not just about squash.

It’s a book about kindness, sportsmanship, honesty and decency.

These are traits that shone through the lifetime journey of a young man who left a comfortable, upper-class upbringing in India for a new adventure in the USA.

He quickly became immersed in the Harvard University squash fraternity, which helped him to settle into his new surroundings.

Alongside his triumphs on the court, and subsequent business forays with fluctuating degrees of success (often hampered by the old-fashioned restrictions and rivalries of family tradition), the relationships he fostered at Harvard also gave him something far more important: lifetime friendships. 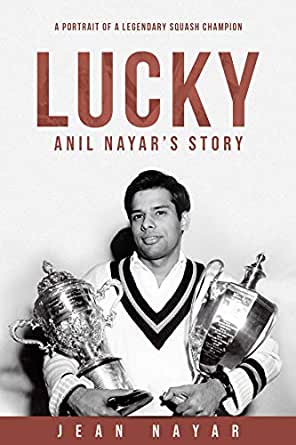 Of all his tournament wins, the one he most frequently mentions in this book is a college title where his opponent, Spencer Burke from Penn, called his own shot “down” while he held match ball against Anil in the semi-finals.

It was a humbling experience for Anil. To him, how you played the game was more important than the list of titles against your name. Fortunately, he possessed both the skill and the fitness to excel in one of the toughest sports of all while extending those high levels of respect and courtesy to all of his opponents.

The book, Lucky, is written by Anil’s second wife, Jean, an American journalist and author.

It was a long time in the making. With such a modest husband, it is clear that Jean relied on correspondence from former team-mates, playing rivals and family members to finally piece this book together.

The sleeve notes refer to Anil as India’s greatest squash player. He may well have been at the time he competed, so I hope Ritwik Bhattacharya, Saurav Ghosal and India’s Commonwealth Games winning team of Joshna Chinappa and Dipika Pallikal won’t be too offended by the claim.

Anil was certainly a formidable amateur player, winning titles in both hardball and softball. But his commitment to the family business, and his sheer love of playing the game for enjoyment, trumped any thoughts about turning professional.

In 1964 he won both the junior and senior national championships in India, and within a year he had become the de facto world junior champion after winning the 1965 Drysdale Cup in London.

That same year he was accepted into Harvard, where he soon absorbed the nuances and techniques of the hardball game. He managed to switch from each code with some ease, winning the US Collegiate title (hardball) in 1967 before representing India in the World Team Championship (softball) in Australia.

In 1969 he became national senior hardball champion in the USA, and, as the first Indian to captain the Harvard team, he collected his third national college title.

His domestic and international successes led to him receiving the Arjuna Award, the highest honour available to an Indian sportsman, and the Bingham Award, Harvard’s acknowledgement for a graduating senior who is regarded as the year’s best athlete in any sport.

These days, a professional squash career may well have beckoned for someone with such obvious talent. Even a reluctant Ali Farag had to be persuaded to turn pro after excelling at Harvard. However, back then, Anil put his love of the sport above any wish to make money from it.

He explained: “My inner voice since the very beginning had convinced me that this was as far as I would go or should go. I had won all I had set out to do and had, from the early stages of my career, never entertained playing professional squash. It was as if an inner switch had been turned off to prevent me from more advanced professional play. The professional tournaments were just not for me.

“I simply could not get my mind around the fact that as a professional I would be playing for money, playing to make a living off a sport I enjoyed and loved so much.

“Would I stop enjoying squash if I turned professional? I’m not sure, but I knew I loved the process of playing and, even more, winning. I also loved the lifelong friends and acquaintances I made through squash and I feared that if the sport became a money-making burden I would lose the love of it.”

Moving back to India with his first wife, Linda, he continued to dominate the national squash scene.

The family apartments in Mumbai’s Marine Drive, with superb views across the Arabian Sea, also had another major benefit. They were close to the squash courts at the Cricket Club of India, where he had learned to play the game as a child. His coach was Yusuf Khan, a member of the famous family who had dominated the squash world from the 1950s for several decades.

Anil went on to collect eight Indian national titles before moving back to America. His success was soon being recognised in Masters events. In 1990 he still mastered both codes, winning the national over-40 titles in both softball and hardball.

But just how good a squash player was Anil Nayar? And what was it that made him so good in this bygone age of all-white clothing and cricket jumpers?

Spencer Burke, ahead of that contest that provided a stand-out moment of sportsmanship and honesty, recalled: “In an earlier match he annihilated me in front of my home crowd and didn’t take his jumper off until midway through. I didn’t do anything to make him sweat, and I couldn’t breathe after seven points.

“Anil was so agile, so fleet of foot, he was like the Fred Astaire of squash – no one could move like him. He was unbelievably elegant, precise and executed his shots with flair.”

Burke also referred to the power Anil unleashed with his racket. “The speed was unlike anything I had ever experienced.”

Later in the book, Burke added more compliments, saying: “Anil played with such ease, he was like a cat, a cougar. He played a different kind of game than the rest of us, and it added to his mystique.

“I have absolute respect for him and what he did for the game, because here’s a guy from India who’s killing everybody with his unimaginable, breathtaking talent. He’s also a great guy. He’s a gentleman, he’s professional, he doesn’t take himself too seriously and he’s not arrogant. It was an honour to be on court with him.”

In the book, Anil reflected on his own inner strengths, saying: “The mental state is undeniably the hardest to manage, but I remember clearly when I felt I had played the best squash of my life – it was like playing an instrument to perfection.”

He added: “The mind takes over, the mind commands the body, the mind sees the imminent next play, the mind tells the body ‘you will have time to heal later but now you must suspend the feeling of pain’ – a spirit overtakes you.

“It’s singularly the most enriching and beautiful moment of being – and it can come for a split second as an exceptional retrieve or an aggressive counter or it can last for the entire period of a game. But it always goes away as quickly as it comes. And it comes rarely.”

In short, Anil Nayar was one of the best amateur players of his generation. While Jonah Barrington, Geoff Hunt, Qamar Zaman and a strong supporting cast launched the first professional tour, Anil opted not to join them.

When his playing career ended, he continued to support deserving causes in squash and welcomed both Jahangir Khan and Jansher Khan to New York as the Pakistani stranglehold on the professional game continued until Jansher’s retirement.

A supporter of various urban squash projects in the States, Anil is a member of the advisory board of the Khelshala academy back home in India, where Jansher’s former coach Satinder Bajwa provides squash, yoga and education classes for underprivileged children.

The book deals briefly with some unpleasant experiences that forced Baj to leave Harvard, and it was Anil who advised him to return to India to fulfil his destiny of opening up the game to the masses and delivering significant community benefits in the process.

Ritwik Bhattacharya is doing something similar near Mumbai, and Anil’s great hope is that the game of squash becomes affordable and accessible to many more people in the future, and creates future champions from all walks of life.

Anil and Jean returned from India to live in Miami, while also retaining an apartment in New York. They were married in the Big Apple as the city was covered in the dust of the terrorist attacks of 9/11.

Anil now holds both American and Indian citizenship but regards himself as part of a “global brotherhood”.

He was inducted into the US Squash Hall of Fame on his 72nd birthday in 2018, at a special luncheon before the finals of the US Open at Drexel University in Philadelphia.

Michel Scheinmann, Nayar’s freshman year room-mate and squash team-mate at Harvard, talked about their half century of friendship. “Anil was the most beautiful squash player,” Scheinmann said. “He grew up playing in the heat in Mumbai and so never sweated when he was playing on cold hardball courts in America. Not a drop of sweat. It was psychologically devastating to play against him.”

Anil’s new friends at a gym in Miami found it hard to believe that this quiet, modest, unassuming guy with the hint of a paunch was a Hall of Famer in such a brutal sport.

But let’s leave the final word to the Harvard Crimson magazine, which described him as “perhaps the best individual performer in any sport Harvard has ever had.”

Smack and whack, it’s good to be back!