Another Egyptian starlet lights up the Pyramids

Alan Thatcher October 28, 2019 No Comments on Another Egyptian starlet lights up the Pyramids 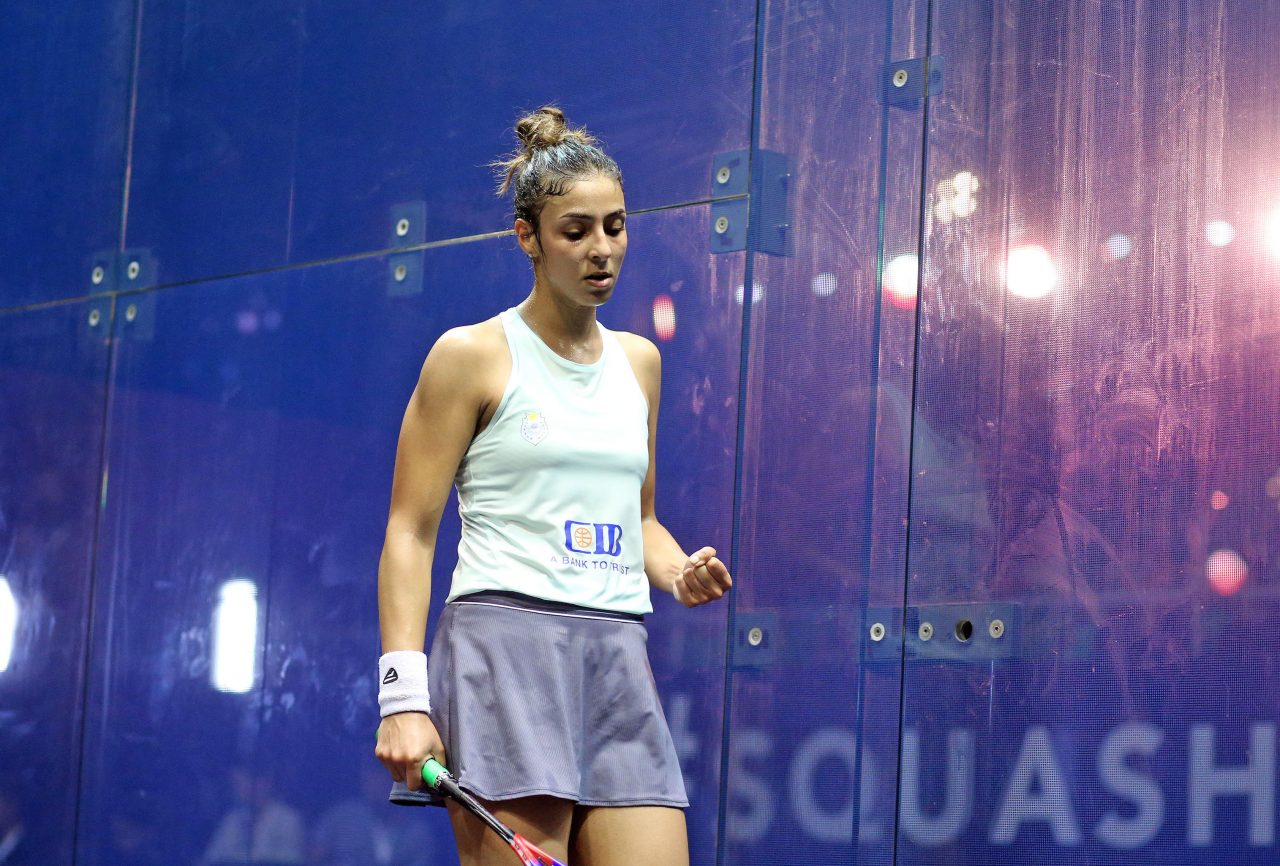 World Junior Champion Hania El Hammamy has claimed her first ever quarter-final berth at the CIB PSA Women’s World Championship after overcoming Malaysia’s World No.48 Sivasangari Subramaniam today in front of the Great Pyramid of Giza.

The 19-year-old El Hammamy claimed the most prestigious title in junior squash in Kuala Lumpur in August of this year, and she has made waves on the PSA Tour, rising to No.11 in the world after semi-final finishes at the China Open and Open de France. Subramaniam, 20, has impressed at this tournament, upsetting No.8 seed Amanda Sobhy and the higher ranked Milou van der Heijden to book her last-16 berth.

The World No.42 fought back from a game down to level, but El Hammamy had the edge as she took the next two games to complete an 11-8, 10-12, 11-8, 11-9 victory which will see her play France’s Camille Serme for a place in the semi-finals of the biggest event on the women’s tour.

“I’m so pleased that I got through this match,” said El Hammamy. “I was a little bit nervous at the beginning of the match. We have played so many times throughout our junior careers and I’m sure we’re going to have a lot more matches on the PSA Tour.

“I know that Siva likes to hold and make the opponent run all over the court, so I wanted to keep my shots tight and push her into the back corners. I ran out of my plan a little bit in the middle of the match, but I’m glad I managed to win.” 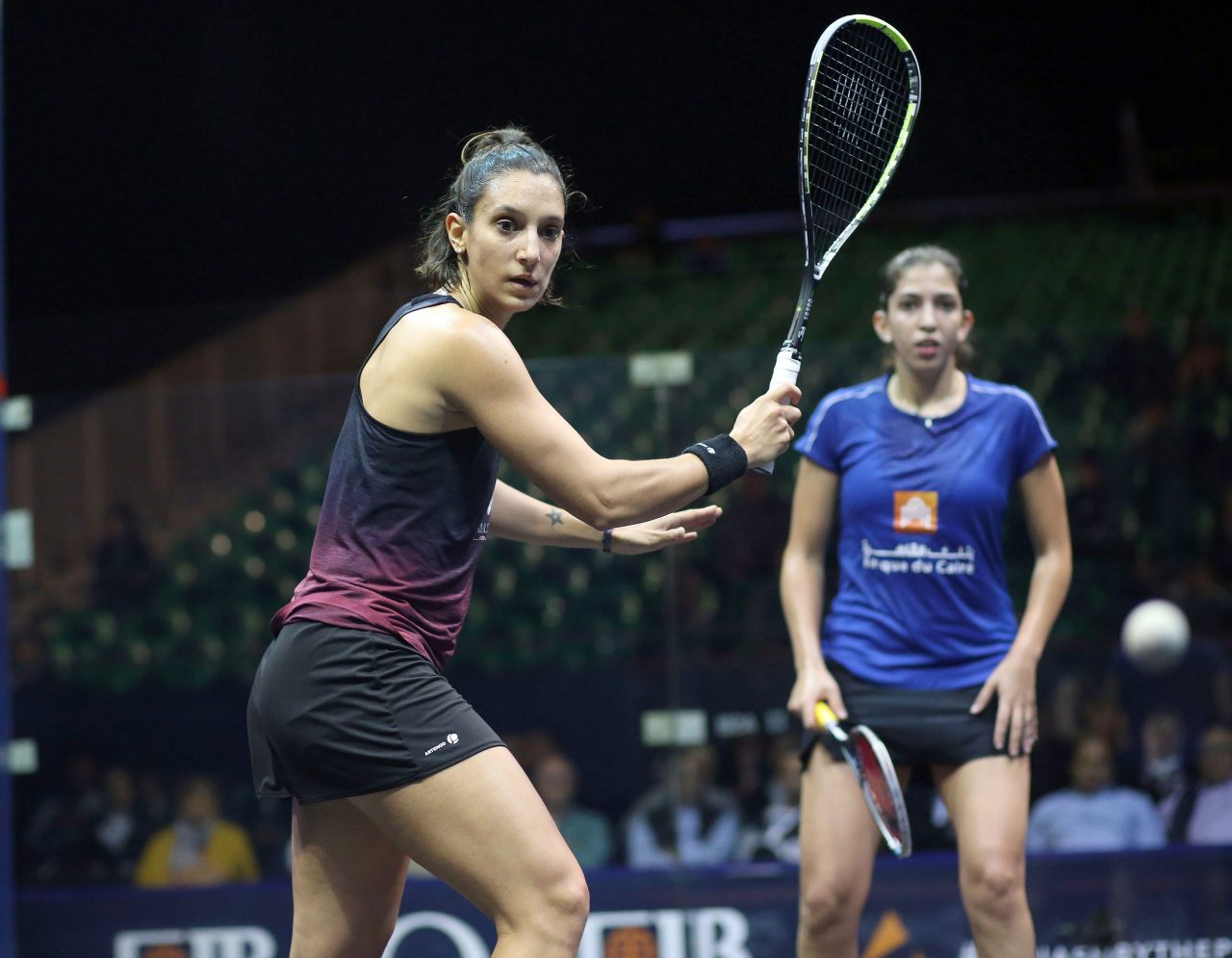 Serme got the better of Egypt’s Yathreb Adel to earn her quarter-final spot. The French World No.4 was at her clinical best in the first two games to comfortably construct a solid lead. Adel came back at Serme in the third, but the Frenchwoman comfortably dealt with it to secure a place in the quarter-finals of this event for the seventh successive season.

“I think I was more more precise today than the first match,” said 30-year-old Serme afterwards. “I found good targets and better rhythm as well, so I’m happy with my performance tonight. I’m looking forward to facing Hania. I played her in France in Nantes not so long ago and it was a really good match, so I’m ready for a battle.”

Egypt’s Nour El Sherbini also booked her spot in the last eight after dismantling India’s Joshna Chinappa in a comfortable 11-5, 11-3, 11-6 victory. The defending champion completed the win in just 21 minutes, and will line up against New Zealand’s Joelle King in the next round. 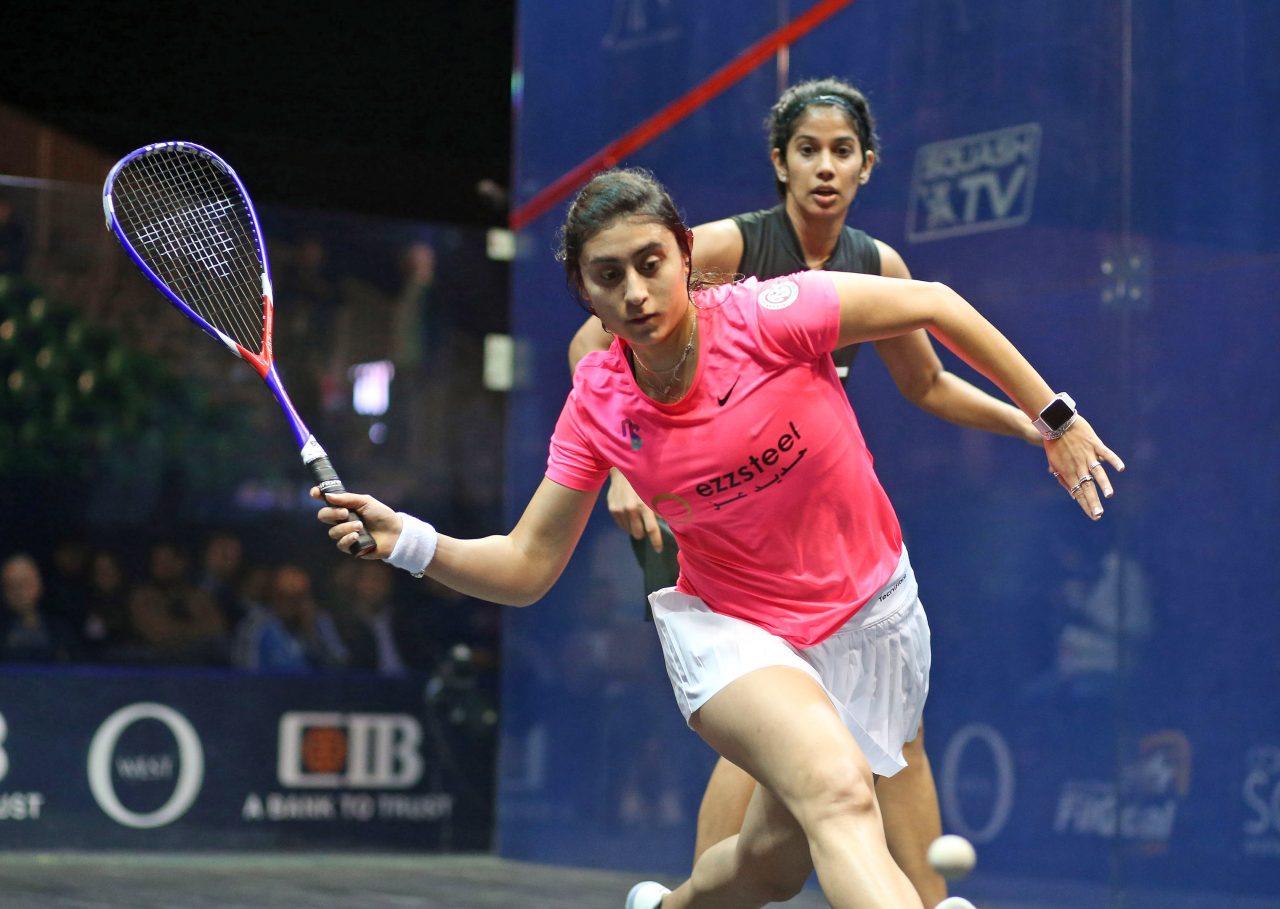 She will take on New Zealand’s Joelle King for a place in the semis, with King overcoming World No.10 Annie Au. The last time the two players met was also in Egypt and it was the Hong Kong player who walked away with the victory. However, King turned things around to reign victorious this time around, showing her mental resilience to claim an 8-11, 11-6, 11-8, 16-14 victory.

France’s Baptiste Masotti reached the quarter-finals of a PSA Platinum event for the first time as he overcame Malaysia’s Eain Yow Ng at the Shooting Club 6th of October in round three of the men’s CIB Egyptian Squash Open. 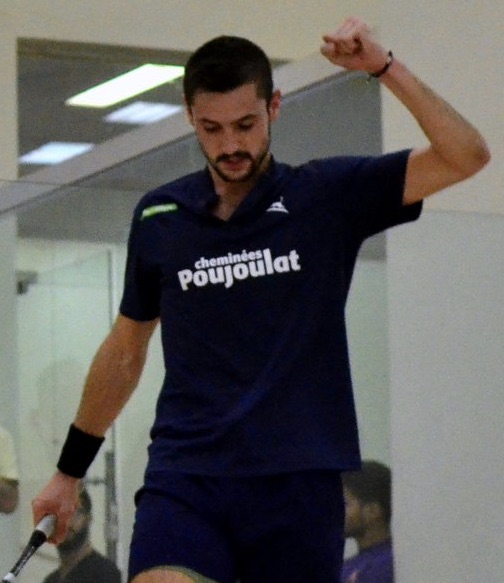 World No.59 Masotti has been one of the success stories of the tournament so far, beating two former top five players in Borja Golan and Miguel Rodriguez to get to the last 16, and he backed that up with a come from behind victory against World No.32 Eain Yow to seal his place on the glass court in front of the Pyramids.

“I’m just so glad to win today, my dream was to play in front of the Pyramids, and in two days I will play there,” Masotti said.

“I can’t wait to go there and play in front of them. At match ball I told myself not to make any mistakes, to just put the ball on the wall, and I think the match ball was the best part of the match. I’m so happy to win this one, it’s unbelievable to be in the quarters. I have a day off, so I will prepare myself for the next match in front of the Pyramids.”

He will play Welshman Joel Makin, who got the better of Masotti’s compatriot, Victor Crouin.

The World No.12 got off to a fast start, putting a lot of work into the legs of the young Frenchman by extending the rallies with Crouin, who was struggling with the pace set by the Makin. The Frenchman came back strongly and showed some nice touches and held two game balls in the third, but Makin held firm to earn his place in the last eight of a Platinum event for only the second time in his career. 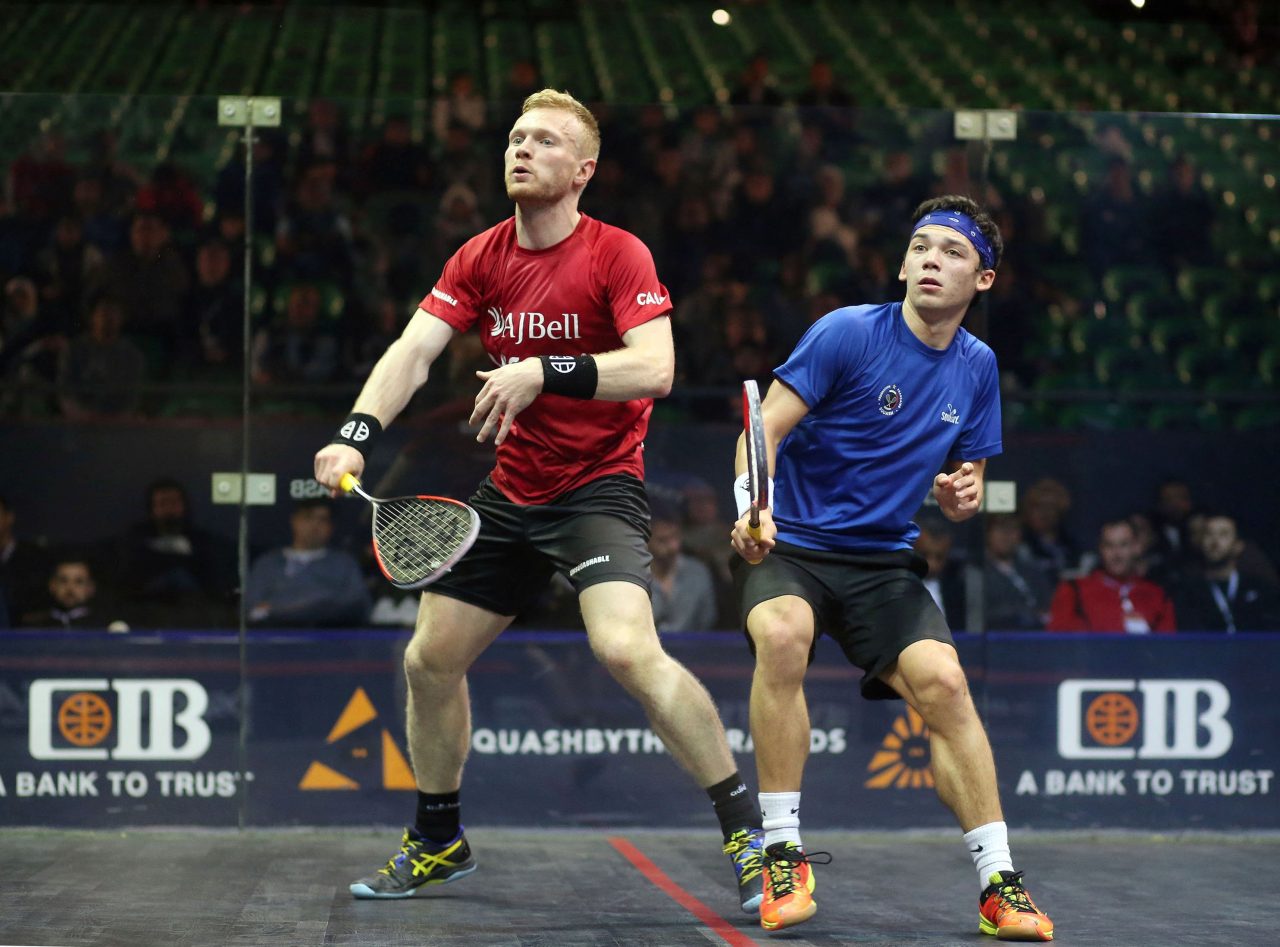 Meanwhile, World No.4 Karim Abdel Gawad made his return to the Pyramids three years after becoming the first man since the legendary Ahmed Barada in 1998 to win a trophy in front of the Pyramids.

He beat Hong Kong’s Leo Au in four games to ensure he will play World No.10 Marwan ElShorbagy, who beat World Junior Champion Mostafa Asal in five games. World No.25 Asal had fought back from two games down to upset No.7 seed Diego Elias in the previous round and threatened to do the same against ElShorbagy.

But the older Egyptian held his nerve during a scrappy decider to earn his spot in the next round.

Action from both tournaments continues with the quarter-finals on Tuesday October 29. Play begins at the Pyramids from 18:30 (GMT+2). Fixtures from the Pyramids will be shown live on SQUASHTV (rest of world), Eurosport Player (Europe only) and the official Facebook page of the PSA World Tour.