Any business people out there prepared to take a new punt on squash?

Alan Thatcher September 26, 2018 18 Comments on Any business people out there prepared to take a new punt on squash? 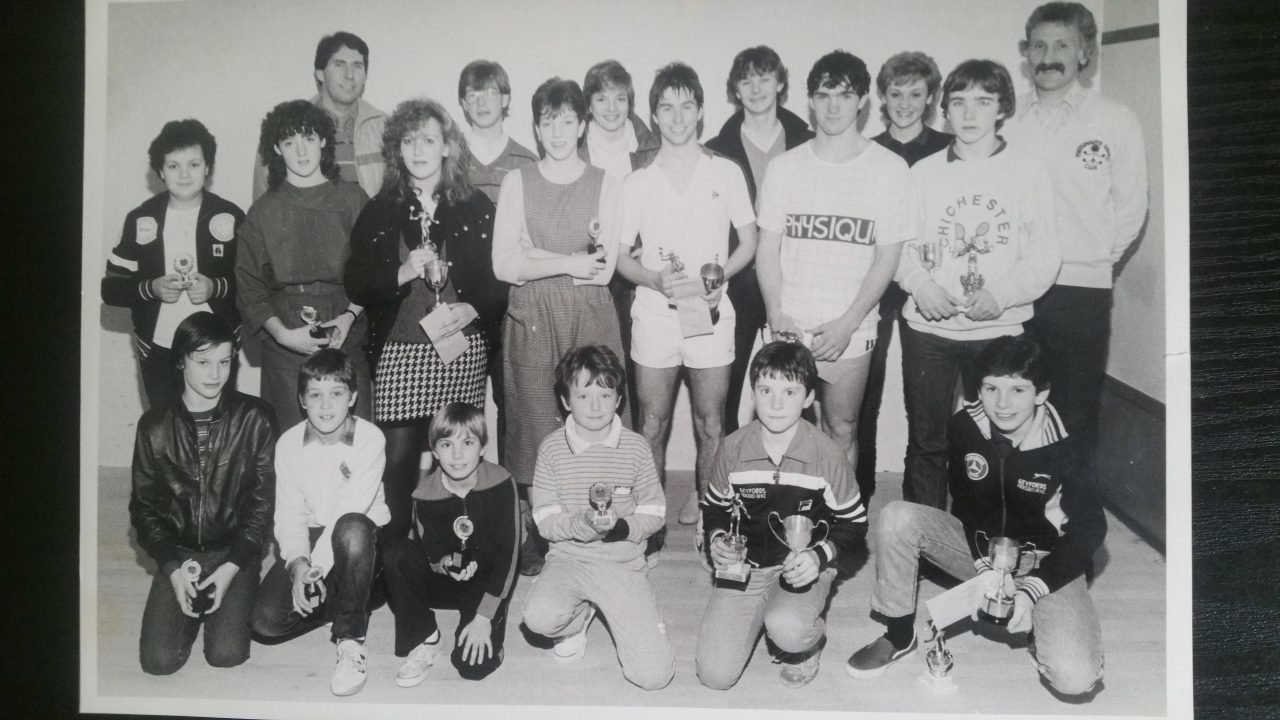 Portsmouth Squash Club had a thriving junior section in the 1980s

On top of organising World Squash Day, and pestering clubs and federations all over the planet to pull their fingers out to promote the sport, I have also been involved in planning a big squash reunion in November.

Both events have made me think long and hard about the difference between the boom years of squash in the 1970s and 1980s, and the dramatic collapse of playing figures in subsequent years.

The reunion is a wonderful chance to take a trip down memory lane with friends from Portsmouth Squash Club, where I played (and learned a lot) during the 1980s.

The club grew to 12 courts thanks to the energy and vision of two squash-loving business partners, Richard Blair and Drusilla Moody, and Portsmouth became National Club champions when Bryan Patterson arrived as coach and built a star-studded first team alongside a superb junior academy in a thriving club atmosphere.

Richard and Dru gave me the opportunity to stage my first professional events, including the Fosters Lager Series which involved Aussies Chris Dittmar and Rikki Hill playing local heroes Patterson, Martin Shaw and the brothers John and Richard Le Lievre.

I have been busy digging out a huge box of press cuttings from 35 to 40 years ago, when I was based in Portsmouth and writing a weekly squash column during that wonderful, golden era.

Patterson, who now coaches at CitySquash in New York, holds summer camps in Hampshire every summer and is coming back over for a Pompey reunion in November. Before then I need to stick all those cuttings into a big A3 scrapbook to share some great memories with all those attending.

Back then, with so many big clubs, we never foresaw the collapse that was coming. Although I do remember Rex Guppy once complaining that team players booking all the peak-time courts caused a significant drop in the number of casual players using the club in midweek, and that was at his magnificent Kingswood club in Essex where he had built 17 courts!

Rex founded an association of commercial club owners, and they delighted in taunting amateur committees about the need to put business priorities ahead of any other consideration. There was a clear gulf between the old SRA and the businessmen who had moved squash forward, expanding UK playing numbers close to three million in the process.

As the SRA demanded subscription fees based on court numbers and membership figures, they met considerable resistance from many of those club owners who felt that the sport should instead be paying them for their services.

There have been so many factors involved in the decline of squash, starting with the loss of courts due to many of those owners cashing in on the value of their properties and selling the plot of land for housing or commercial development, and gym chains buying up clubs and changing the use of so many venues. It will be a bitter-sweet moment when I return to Portsmouth to a club that has shrunk to just four courts after three decades of gym club ownership.

We have seen players from those boom years hanging up their rackets in large numbers, usually when age overtook their enjoyment of the game, and clubs appeared to have little idea of how to stem the tide. Suddenly it became clear that the popularity of the sport had diminished and there were very few younger members coming through to fill the gaps. 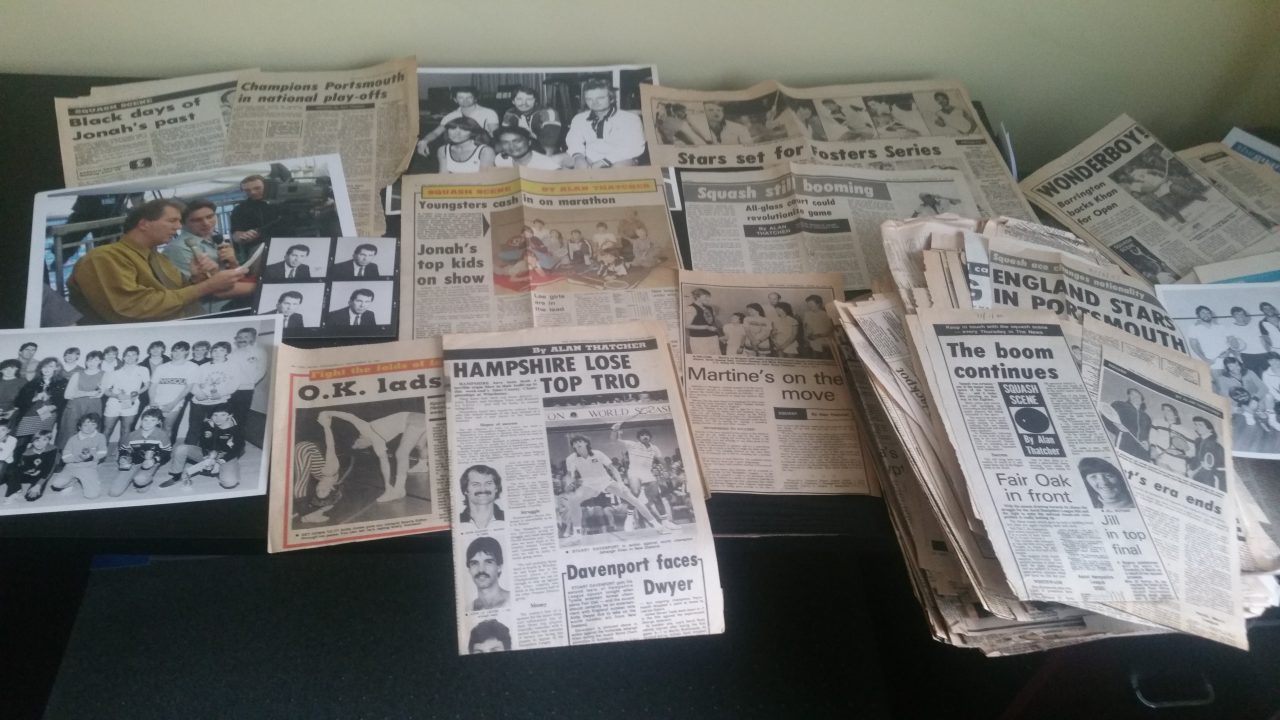 A mountain of media cuttings from the golden days of squash

In essence, squash has missed out on three generations of junior players since those boom days. Many clubs now have a group of juniors, a smattering of players in their 20s and 30s, and the bulk of their membership aged between 45 and 65.

But let’s take another step back and try to understand what caused the massive growth of squash in the 1970s and 80s. Simply, the popularity of squash grew on the back of entrepreneurs sensing an opportunity to make money out of the sport. The growth was NOT driven by any squash federation or amateur committee.

Society was very different in those days. The beginning of squash’s decline coincided with the arrival of burger chains and foreign food takeaways.

People’s eating habits changed dramatically and we are now seeing the result in a society struggling to cope with issues of obesity in both children and adults.

Drink-driving laws meant that people started drinking at home instead, and now every supermarket is cashing in, with shelf after shelf stacked with cheap alcohol.

People who only used to drink when they went out out for an evening are now guzzling booze at home every night while they slump in front of the telly.

A healthy sport like squash should be promoted as a valuable part of the solution to these issues, and a great way to improve the lives of thousands of children, especially those from disadvantaged backgrounds.

Very few clubs or county associations have a clue about addressing these issues, so squash clearly needs some smart-thinking individuals to set the ball rolling. World Squash Day gives every club on the planet the opportunity to join forces on one special day to open their doors and show the world what a great game we have.

Many clubs show enormous creativity to stage some special events. Others simply don’t bother. It will be no surprise if they are the clubs with dirty courts, leaky showers and a bar full of middle-aged men with no female members in sight.

The decision by David Lloyd Clubs to close more than 100 courts and replace squash with a fitness class called Blaze means that parts of towns and cities like Southend, Derby, Middlesbrough, Milton Keynes and areas of London are being left without squash facilities.

It is yet another tale of woe for the sport but it does offer an opportunity for a new style of club to fill the gaps, one with squash as major part of the sporting, health and fitness activities on offer.

As I have mentioned to several people in recent weeks, it is a little bit crazy to place the future of squash in the hands of a third party. So it is up to squash lovers to provide the solution. We need a new breed of entrepreneurs, just like those pioneers of 40 years ago, who are prepared to take a punt on squash. Those salaried officials and committee members who are ignoring World Squash Day are not the people to take the game forward.