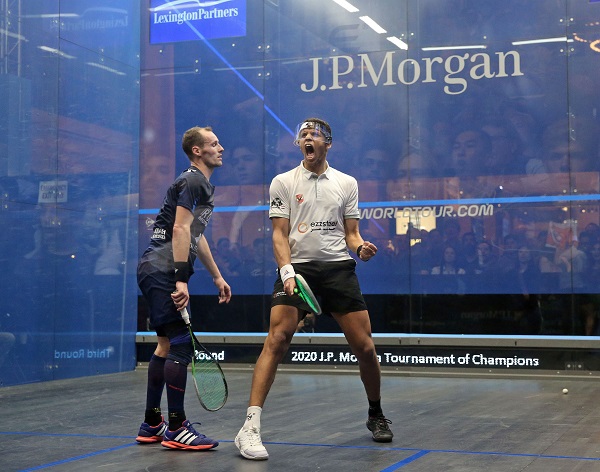 ‘Gaultier is such a legend, and I can’t describe the feeling of sharing a court with him’
By SEAN REUTHE – PSA World Tour

World No.21 Asal upset World No.9 Mohamed Abouelghar in the previous round, while 37-year-old Gaultier made a sensational return from 15 months out injured as he defeated former World No.3 Omar Mosaad 3-2 in a repeat of the 2015 World Championship final.

It was a match which saw youth come up against experience in an extremely high-quality affair, with both players taking two games apiece as three tie-breaks delighted spectators inside Grand Central’s picturesque Vanderbilt Hall.

It was all about the teenager in the fifth game as he raced into the lead, before a contentious call with regards to a possible double bounce was called good in Asal’s favour. The 8-4 advantage was too much of a gap for the war-weary Gaultier, who picked up just one more point as Asal closed out a 5-11, 13-11, 12-10, 10-12, 11-5 victory in 75 minutes to mark the biggest PSA Tour win of his career.

“Gaultier is such a legend, and I can’t describe the feeling of sharing a court with him,” said Asal afterwards.

“I remember when I was 13 years old, I went on court to practice with him, every single day after his matches in El Gouna, so I want to thank him for the opportunity to play with him. He really is a legend and I can’t describe my feelings to him.

“I was a child and I texted him to ask if I could play with him in El Gouna and he said yes. I know if he hadn’t have been injured then he would have finished me in about five minutes. It’s unbelievable to play here, it’s my second home, and it’s the best tournament that I have ever played on the PSA.”

Asal will clash with World Champion Tarek Momen for a place in the semi-finals, with Momen dispatching Malaysia’s Eain Yow Ng by a 3-1 margin. 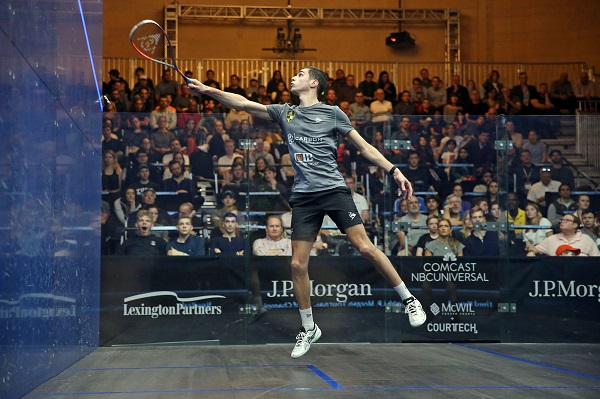 World No. 1 Ali Farag was stretched by compatriot Youssef Soliman

Meanwhile, defending champion Ali Farag is through to the quarter-finals where he will take on World Championship runner-up Paul Coll in a mouthwatering fixture after they beat Egypt’s Youssef Soliman and England’s Tom Richards, respectively.

“He didn’t make it easy for me,” Farag said.

“I was listening during the pre-match introductions and Youssef has had an amazing year, he’s been beating a lot of top players and he has shown on this court that he has been playing really solidly, so I had to be on my metal from the beginning. He didn’t make it easy but I think a bit of experience at the end of the games made the difference.”

The second round of the women’s event continued today as two American players – Olivia Blatchford Clyne and Sabrina Sobhy – booked their round three berths courtesy of wins over World No.9 Tesni Evans and World No.15 Victoria Lust. 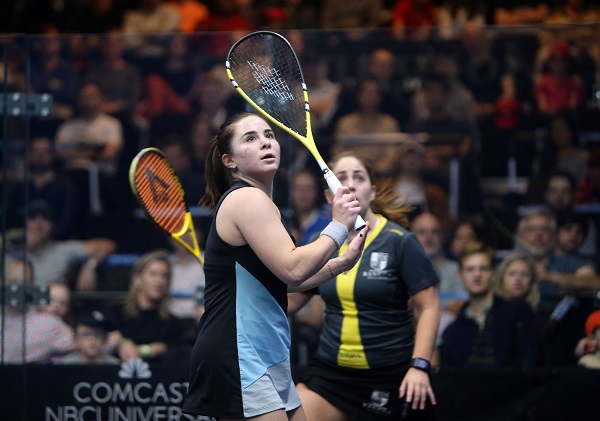 Blatchford Clyne’s clash with Evans was cut short after the Welsh player rolled her ankle early on in the opening game, and the US No.2 will now take on reigning champion Nour El Sherbini after the Egyptian defeated Dutch player Milou van der Heijden in straight games to kickstart only her second tournament of the season.

“It’s awful, I’m very blessed that I’ve never had that happen to me,” Blatchford Clyne said.

“I’m sure she’s heartbroken and I’m heartbroken for her. I’m also gutted I didn’t get to do it, but I just hope that she’s able to recover as quickly as possible. She’s a really tough, entertaining cookie and I’m sure she will be back soon.”

World No.39 Sobhy continued her fine tournament so far as she followed up an opening day win over Hong Kong’s Joey Chan to beat the higher-ranked Lust to become the only member of the Sobhy family to reach the last 16 after older sister Amanda bowed out in a shock loss to World No.27 Emily Whitlock yesterday.

“She made it incredibly challenging for me,” said Sobhy.

“I needed to focus point by point and on my game and not let the crowd or my emotions get involved. It’s big to be able to see my family and friends supporting me here and makes these matches more memorable. My goal was actually just to get past the first round, so it’s going to be really cool playing on the glass.”

Sobhy will play England’s Sarah-Jane Perry for a place in the last eight, with Perry beating Belgium’s Nele Gilis in a match which saw a 16-14 win for Perry in a nail-biting first game prove crucial.

Meanwhile, Australia’s Donna Lobban donated $1 from every point won in her clash with Egypt’s Nour El Tayeb to go towards the aid in Australia helping to stop the devastating bushfires that are affecting the country at the moment. The World No.47 tested El Tayeb, but the World No.4 pulled through to book her last 16 spot against Egypt’s Salma Hany.

New Zealand’s Joelle King and India’s Joshna Chinappa also claimed wins and will contest the other third round fixture on the bottom half of the women’s draw.

The men’s third round begins tomorrow, while round two action of the women’s event continues. Action at Grand Central Terminal begins at 12:00 (GMT-5) and will be shown live on SQUASHTV (rest of world), Eurosport Player (Europe only) and the official Facebook page of the PSA World Tour.