Aussies power through on day one of World Doubles

Howard Harding June 17, 2019 No Comments on Aussies power through on day one of World Doubles

Aussie brothers Nicholas and Thomas Calvert in action against The Philippines

Hosts Australia made a perfect start to the WSF World Doubles Squash Championships at the Carrara Squash Centre on the Gold Coast, going through day one of the event undefeated.

Defending men’s doubles champions Cameron Pilley and Ryan Cuskelly from New South Wales, fresh from their exhibition tour around the east coast, were tested against South African pair Jean-Pierre Brits and Christo Potgieter. The Australian pair cruised through the opening game before a change of tactics from Brits and Potgieter saw them level the match. In the third, the Australian duo were too strong, winning 11-5.

Brothers Nicholas and Thomas Calvert, both making their Australian senior debut, defeated the Philippines pairing of Robert Garcia and David Pelino 11-9, 11-5. The Queenslanders won a marathon first game that took 27 minutes, before cruising through the second game to take the match.

In Pool B, Rex Hedrick and Commonwealth Games gold medallist Zac Alexander were too strong for Malaysia’s Darren Chan and Bryan Lim Tze Kang, with the Australian second seeds winning 11-7, 11-9.

The Colombian pairing of Andrés Herrera and Juan Camilo Vargas also are undefeated after day one, proving too strong for Sri Lanka’s top pair of Ravindu Laksiri and Shamil Wakeel 11-5, 11-7. 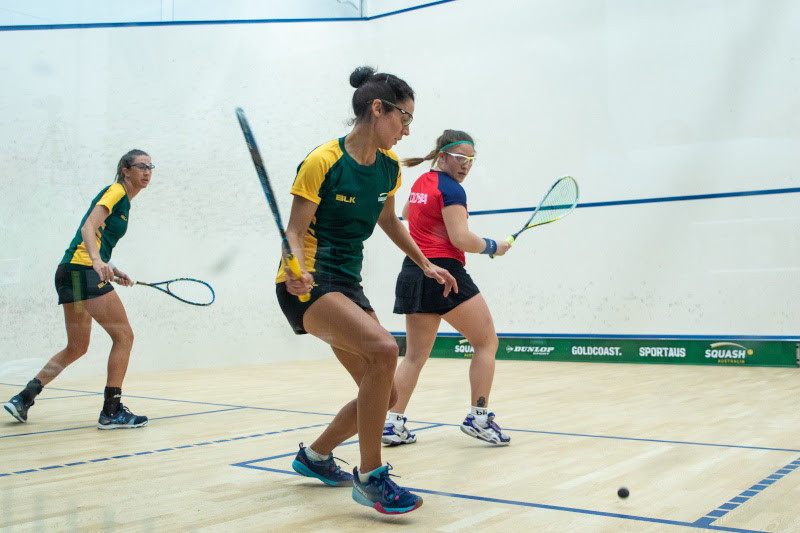 Christine Nunn and Donna Lobban (left) and in action for Australia

In the women’s event, Australian top seeds Donna Lobban and Christine Nunn (pictured above) cruised past Colombian sisters Laura and Maria Tovar 11-8, 11-5. It was a tougher test for the Australian second seeds, Sarah Cardwell and Jessica Turnbull, who were stretched by Jemyca Aribado and Aysah Dalida of the Philippines. The Australian pairing, with Turnbull making her national senior debut, took the match 11-8, 11-9.

Pilley and Lobban are again together in the mixed doubles competition, with the cousins from Yamba looking to add another gold medal to their mixed doubles success at the 2018 Commonwealth Games. The top seeds didn’t have it all their own way in their opening match though, with Aribado and Garcia (Philippines) proving tough opponents. The Australians took the first game 11-5, before coming from behind to claim the second 11-9.

Colombia’s Catalina Pelaez and Matias Knudsen thrashed the Maltese sibling pairing of Colette and Kijan Sultana 11-1, 11-2. The 17-year-old South Australian Alex Haydon was also a first day winner, joining with Alexander (who backed up immediately after his men’s doubles match) to defeat Aysah Dalida and Reymark Begornia (all pictured below) of the Philippines 11-6, 11-9. 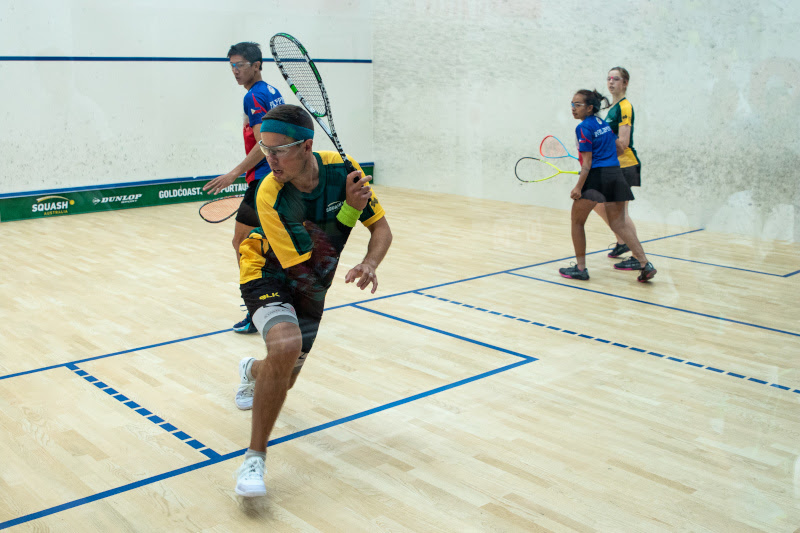 Zac Alexander (about to strike) and Alex Hayden in action