Gordon Kerr August 5, 2019 1 Comment on Balls and Walls: How all racket sports owe a debt of gratitude to a French king

The Real Tennis court at Hatfield House, north of London

Squash Mad is launching a new series called Balls and Walls. With padel, a mixture of squash and tennis, on the march, new correspondent Gordon Kerr looks at the origins of racket sports and, in coming weeks, reveals how so many varieties of sport have evolved from those basic ingredients … balls and walls.

Few squash players are aware of how great a debt they owe to King Louis X of France (1289 – 1316). He was known as The Quarrelsome, which made him one of the earliest sportsmen to have a nickname. Maybe Gregory Gaultier modelled some of his on-court behaviour on his royal predecessor, bringing genuine history to the word histrionics.

Instead of entering court to loud music, dry ice clouds, dancing girls and shimmering computer graphics on the court walls, King Louis would have had his own signature Gregorian chant, possibly from the Notre Dame school. The troubadours may well have doubled up as ballboys. They may even have helped out in the showers.

King Louis constructed the first indoor tennis court – real tennis that is, around the end of the thirteenth century. All modern racket sports derive from real tennis.

A fundamental difference between real tennis and lawn Federer tennis is the presence of the walls and in particular the sloping ‘penthouse’ roof that starts at head height, and onto which the ball must be projected by the server.

The receiver has the pleasure of a free volley since the rules require the server to deliver the ball into the corner of the court where the receiver awaits. 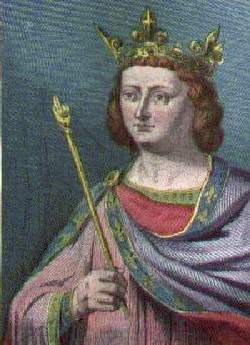 The real tennis serve is thus a defensive shot and a great deal of skill is required on the part of the server to impart a variety of spins in order to make the ball defy its gravitational path and swerve/ spin back into the penthouse wall.

This requires an overhand strike above the server’s head, an action considered indecent for ladies, and thus tennis originated as a male only sport.

Medieval market traders were presumably oozing gratitude to Louis for bringing in the crowds. Historians have tried to link the development of tennis to religious, cloistered buildings, because of the visual similarity between cloisters and the pictured modern court where both players aim at galleries, separated by posts, all of which are situated underneath the sloping penthouse roof.

I think the origins of the outdoor game reflect the extreme arrogance of the nobility of the thirteenth century.

The nobleman would simply walk into his local market square or street, where shopkeepers shielded their wares from the sun under sloping canopies, and instruct his servant to ‘serve’ the ball onto any awning.

Using a racquet, the nobleman would derive great pleasure from accurately volleying the ball as it dropped off the awning into the baker’s shop, no doubt the more loaves of bread he scattered around the shop the greater the praise showered upon him by the servant and other attendant grovelling lickspittles.

Clearly, the development of a purpose-built court, indoors, was not prompted by any concern for the shopkeepers but probably to ensure the game could be played in all weathers and free from the distraction of shoppers.

At this point I would like to offer some credit to King Louis. According to Wikipedia he allowed serfs to buy their freedom (which was the first step towards the abolition of serfdom), abolished slavery, and readmitted French Jews into the kingdom. As well as The Quarrelsome, he was also known as The Headstrong and The Stubborn. Obviously an early Jean McEnroe.

The huge popularity of real tennis, and the enthusiasm for ladies to play the game as well as broaden its appeal, led to the development of tennis on grass in the period 1860-73.

An English gentleman with the delightful name of Walter Clopton Wingfield turbocharged the development of the game by designing rules, and encouraging competitive play, the first tournament being held in Royal Leamington Spa in 1873.

Serving was underarm, so ladies could play without infringing their modesty. Equally importantly, you were unlikely to be killed playing lawn tennis, since the invention of vulcanised rubber enabled Wingfield to produce a soft bouncy ball.

Death at tennis was more common than perhaps the modern enthusiast suspects. The game was played with venom and regarded by noblemen as practice for wars in which most were constantly engaged.

In June 1316, perhaps Louis had a particularly tough tennis match, perhaps he picked one quarrel too many with his opponent, but after the game he drank too much cooled wine to refresh himself, and promptly died aged 27.

History was repeated many centuries later when Elvis Presley, also known as “The King”, played racketball one morning on his private court at Gracelands and chose an incredible cocktail of refreshments to wash down his favourite post-match meal of four giant hamburgers with extra cheese. Like King Louis, he died on the throne.

More deaths through medieval times, and changing the line of history …