‘Best win ever’ gives Beddoes confidence ahead of the New Year

WORLD number 25 Emma Beddoes cannot hide her eagerness for the WSA Tour to resume in the New Year, following several high-profile victories in the latter stages of 2013.

The Leeds-based 28-year-old won the Penang Open in October and caused a huge shock earlier this month by defeating world number eight Low Wee Wern in the first-round of the Hong Kong Open. 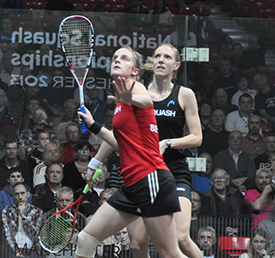 While she could not repeat the feat against home favourite Annie Au in the next round, the BSPA Grand Prix Finals champion was encouraged by her performances in one of the biggest events on Tour.

“In terms of beating an in-form, top-10 player in a big tournament, it was my best ever win,” the former world number 21 told England Squash and Racketball.

“I have reached the quarter-finals of a World Series event before and also beaten other girls in the top 10, but not on such a big stage.”

In what Beddoes admits was a ‘year of two halves’, the England number seven recovered from a foot injury and some inconsistent performances to win three Tour titles this year.

“I started off the year coming back from a ruptured plantar fascia and I was very inconsistent. Yes, I won two titles, but in between those I was performing below the standard I had set for myself.

“After a solid period of summer training, I came back to the Tour playing my best squash to date, pushing Camille Serme close [in the Malaysian Open] and getting great wins over Rachael Grinham [in the Penang Open final] and Low Wee Wern. So the second half of 2013 has definitely been my best yet.”

Beddoes will be looking to win her second Meadowood Pharmacy Open in February and after beating world number two Laura Massaro twice in the PSL this year, she is hopeful that further big name scalps in ranking events will catapult her into the world top 20.

“I don’t focus too much on ranking. At the end of the day, if I am competing at that level and getting the wins, the ranking will follow.

“If I keep working on the things I need to improve and progressing as I have been, I have every confidence I will get there.”