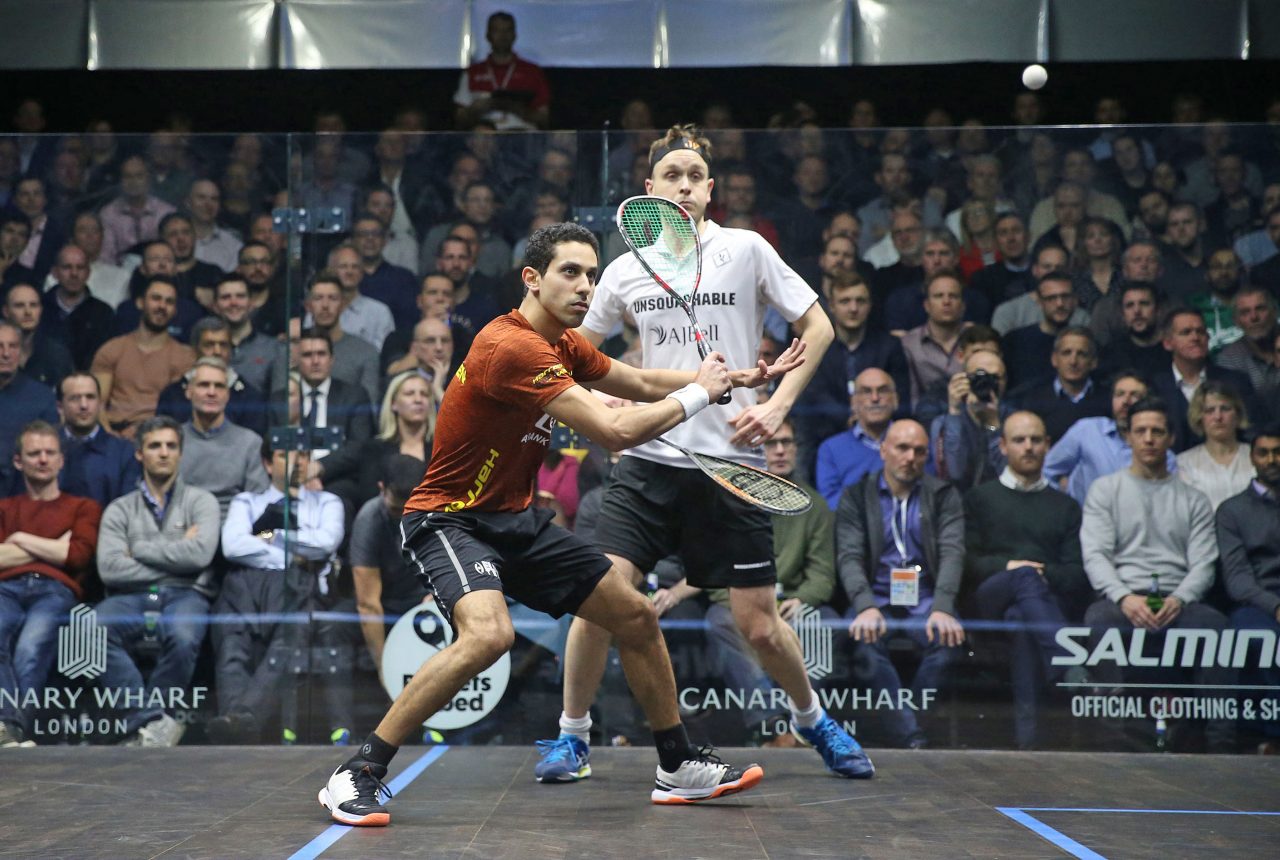 I was fascinated to see the trial of the best-of-three (BO3) scoring system during the hugely successful Canary Wharf Classic. It set me thinking, to what extent is squash suffering from an identity crisis? And what impact will the introduction of BO3 scoring have on the game?

Just how many changes should an established sport go through? Squash has a history dating back to the mid 19th Century, or back to the 18th Century if you consider the game of Rackets (go back to the 14th Century if you want to link to real tennis). Interestingly, scoring in Rackets still uses HiHo scoring (hand-in, hand-out), first to 15, best of five games.

Not much changed for squash following the introduction of HiHo, first to nine, best of five. Well, not until 1989. There had been some improvements to the courts e.g. glassbacks from the 1960s. Remember that the standardising of court dimensions didn’t occur until the 20th Century had got under way. This meant that early squash courts were built of varying dimensions, so we’re heading from one type of trouble to another from this point on.

It’s not until 1923 that we have a standardised court on which a consistent game can be developed. Until this point we have six different court sizes and five different types of ball. From 1930 to 1934 the arena of change was the ball, with the speed being reduced by half. That was, and is, the situation in the U.K. What about internationally?

This from James Zug’s history of Squash (http://www.worldsquash.org/ws/a-sport-with-history ):

“By the 1920s, the world figured out there was a problem. Just like its parent games of racquets and fives, squash had developed different, unstandardised versions around the world. Squash coalesced around two versions: the twenty-one foot wide court popularised by England and called softball and the eighteen-and-a-half foot court in North America called hardball.
For the next seventy years there were two types of squash, softball on a wide court and hardball on a narrow court. It was analogous to tennis, with clay, grass and hard courts. The division persisted until the 1980s in Canada and the early 1990s in the U.S. and Mexico, when North America switched from hardball to softball. Today there are still more than a thousand hardball courts in North America, but the world finally plays the same game.”

Here’s how the changes to the scoring unfolded:

1989
Men’s pro squash switches to 15-point, point-per-rally scoring; the British Open doesn’t switch for men until 1995.
1990
Men’s pro squash switches to a 17-inch tin.
1992
The International Squash Rackets Federation changes its name to the World Squash Federation.
1993
In January the pro hardball and pro softball men’s associations merge to create the PSA.
1995
In March squash is played for first time in the Pan-American Games in Argentina.
In June the Tournament of Champions is staged in Grand Central Terminal in New York.
1996
In May the Al-Ahram International is played in front of the Great Pyramids of Giza, Egypt. Greg Zaff starts SquashBusters in Boston, USA, first urban youth enrichment squash and education program.
1997
In October Squash Magazine in America publishes its first issue.
1998
In September squash is played for first time in the Commonwealth Games in Kuala Lumpur, Malaysia
2000
The men’s pro hardball doubles tour splits from the PSA and forms the International Squash Doubles Association.
2001
The Squash Rackets Association becomes England Squash.
2004
In February pro squash is first streamed live on the Internet with the semi-finals of the Tournament of Champions.
2005
The men’s pro tour switches to 11-point, point-per-rally scoring.
2007
The Women’s Squash Doubles Association for hardball is founded.
2009
The women’s pro tour switches to 11-point, point-per-rally scoring
2011
In March the PSA begins to use a video referee and player appeal system.
2012
The men’s pro hardball doubles tour in North America is reconstituted as the Squash Doubles Association.
2015
In January the PSA and WSA (formerly WISPA) merge to create a new PSA; it is one of the very few global professional associations that includes both men and women.
In September, the PSA lowers the pro women’s tin to 17 inches; amateur play still uses a 19-inch tin.
In September, squash’s bid for inclusion in the 2020 Olympic Games ends; this follows previous failed bids for London 2012 and Rio 2016.

A period of an incredible pace of change. With still no inclusion in the Olympics.

Let us consider the part that scoring plays in all sports. At its most basic level, scoring lets us know who has won. And who has lost. Some sports allow draws to take place but, on the whole, we need a winner and a loser to give us closure.

How does scoring differ in other sports? In sailing, the scoring is complex to an outsider. Here you have to know the scoring to be able to belong to the sailing fraternity. So having a complex scoring system can be used to keep out people who are not “right”. Complex scoring creates cliques.

Looking at the most popular sports (as @mainser did here: https://squashmad.com/breaking-news/best-three-trying-best-seven/ ) it’s easy to declare that simple scoring is generally associated with high-attendance spectator sports.

Football has a simpler set of rules than, say, rugby. And possibly enjoys a bigger audience share as a consequence. But once you have spectators who understand the system (the simpler the system, the more potential spectators you have) then it’s about looking for levels of excitement to lock in those spectators. It’s also useful if the spectators can experience the same scoring at amateur level as the professionals do. Otherwise we end up with an increasing disconnect between the players and the supporters.

Tennis has shorter games (but longer matches) with longer rallies (but fewer shots played) than Squash, but it has more critical points within a match. In tennis you can be out of the game before you even get started: four aces and it’s game over. In squash this has to be somewhere between nine and 15 aces, depending on your scoring system.

So maybe Paul Main’s idea of squash switching to best of seven, with seven points per game might be a strong contender. After all, tennis has a scoring system that is simple but curious (https://www.quora.com/What-is-the-history-of-tennis-strange-scoring-system ), so why not move toward emulating that? Instead it would seem that squash is in the emulating business but it has designs on badminton, not tennis.

Whatever is driving the changes of scoring in squash is probably the same thing driving changes in badminton. Yet badminton is already an Olympic sport so badminton’s need to transform isn’t because it is showboating itself to an Olympic panel. Squash had made it into the Commonwealth Games following a change of scoring nine years earlier to 15-point PAR (point-a-rally).

There are several groups to consider when looking at BO3: Professionals, spectators, amateurs, potential players, Olympic committees, TV sports commissioning editors and referees. This is surely what the governing bodies of squash should be doing. If squash, after all its years, is still trying to “find itself” then it ought to just stop it and grow up. It’s time to gather the voices of all the groups and to declare what squash’s true identity is.

For me, and for what it’s worth, I would want to see a unified scoring system for all players of squash irrespective of standard. What makes squash exciting is the exchange of shots between the two – or four – players. Changing from HiHo to PAR 15 in 1988 probably lost the sport many of its traditionalists while bringing about a more attacking game. Every time it changes its scoring, it fractures a little bit more.

There is probably a sweet spot regarding scoring and that is no doubt what the changes are looking for. I’m going to play my next game using tennis scoring to see how that affects things. Then go back to HiHo. Then I’ll throw my hat in the ring with a suggestion.

But please, let’s remember the words of Rudolph Giuliani: “change is not a destination, and hope is not a strategy”.

Craig has been involved with squash since 1980, when he hit his first squash ball with a borrowed racket. Following a sizeable hiatus from the game, he now plays squash at Woodfield Squash Club in Doncaster.