Alan Thatcher October 4, 2019 No Comments on Black Ball Club, home to the stars and setting their sights on keeping Egypt on top of the world 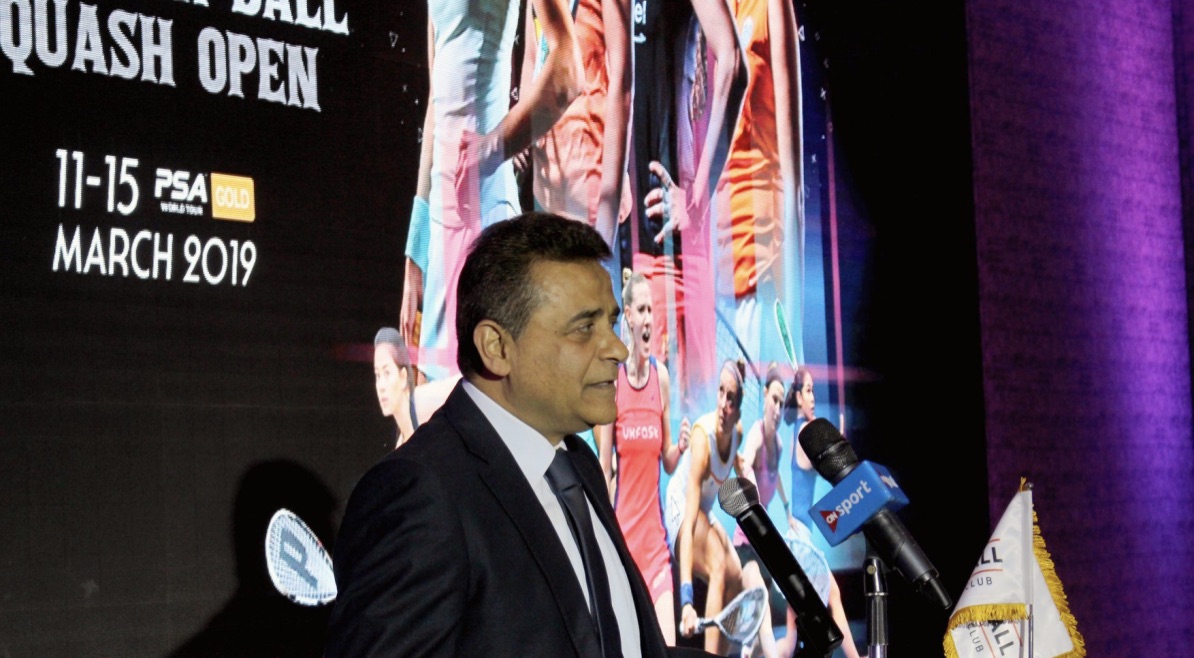 11 Points With Ashraf Hanafi: ‘Our target is to be the biggest squash club in the world’
By ALAN THATCHER – Squash Mad Editor

The Black Ball Sporting Club in New Cairo has enjoyed an outstanding first year of operations, staging two major professional tournaments and laying the foundations for future growth by implementing one of the world’s most advanced junior development programmes.

With an army of professional coaches, the Black Ball Club has set its sights on keeping Egypt in the seat of power for many years to come.

The phenomenal growth of Egypt as the world’s leading squash nation has been matched by the ambitions of this impressive club, with 19 courts, including a magnificent all-glass show court.

We have learned a lot about the workings of the organisation in this special Squash Mad interview:

11 Points With Ashraf Hanafi (Squash Director and Head of Performance at the Black Ball Sporting Club in New Cairo).

1: Ashraf, congratulations on a very successful first year or so of operations at the Black Ball Sporting Club. Please tell us how the club was founded?

A: Thank you for your greetings, but we still have a lot of new plans. The club was founded when some parents of some squash players decided to build a club for their kids to get training and their ambition was for the club to develop and become one of the best clubs in the country.

2: What is the management structure? Who are the key individuals (both corporate and staff?)

3: How many squash courts do you have? Which company constructed the courts? And how many spectators can you seat around your fantastic all-glass showcourt?

A: We have 19 courts including one full glass court, two three-sided glass courts, plus two doubles courts. All courts were built by Courtwall with Junckers flooring with their agent NoLet Squash & Tennis Club. We can seat 800 spectators around the Centre Court.

4: Besides squash, what other facilities do you have?

5: With Egypt so dominant in global squash terms, how many leading professional players are based at the club?

We have some successful juniors. Some are British Junior Open winners and some will be world champions soon.

6: How do you structure your junior programme?

A: We have programmes for teaching kids from mini squash from four years old, then we have coaches managing the way players advance to the academy, then pre-team, then junior team, then the elite  professional squad. We start from the very beginning with mini squash, teaching the most important skills for squash players. From learning to grip the racket, young players develop their own style until we produce a world class player and some world champions.

7: How many coaches do you have to take care of such a comprehensive programme?

8: Running two major professional tournaments in the past year, one male and one female, must have helped put the Black Ball club on the map. What kind of media coverage did you generate in Egypt? And who were your main sponsors for the event?

A: I am proud to bring Squash TV back to Egypt for broadcasting. At the same time we got live TV in the main sport programme in Egypt (ON Sport) with Podium to analyse the play before and after the matches.
We got millions of viewers plus newspaper coverage and extensive news in the worldwide squash media. Our sponsors are different from tournament to each tournament.

9: What are your plans for World Squash Day on October 12th?

A: We are holding an open day for all squash players, inviting schools around the club, with some fun activities and some exhibition matches.

10: I understand you are hosting the official launch of the film Pharaohs of Squash the following week. What can you tell us about that project?

A: An Italian Egyptian director Mr Sherif Fathy has been working hard to produce the Pharaohs of Squash film. It lasts 55 minutes, discussing and showing why Egypt is so good in squash with top players and coaches. It includes interviews with Raneem El Welily, Tarek Momen, Omar El Borolossy and myself. That will be premiered on 19th October and hopefully translated into many languages.

11: What are the future development plans and business targets for the Black Ball Club?

A: Our courts are just full and we are planning to add new squash courts to be the biggest club in the world. We are working on some partnership offers to have create new Black Ball branches both inside and outside Egypt.

Ashraf, thank you for your time in answering our questions. Congratulations on everything the club has already achieved and good luck for all of your future plans.