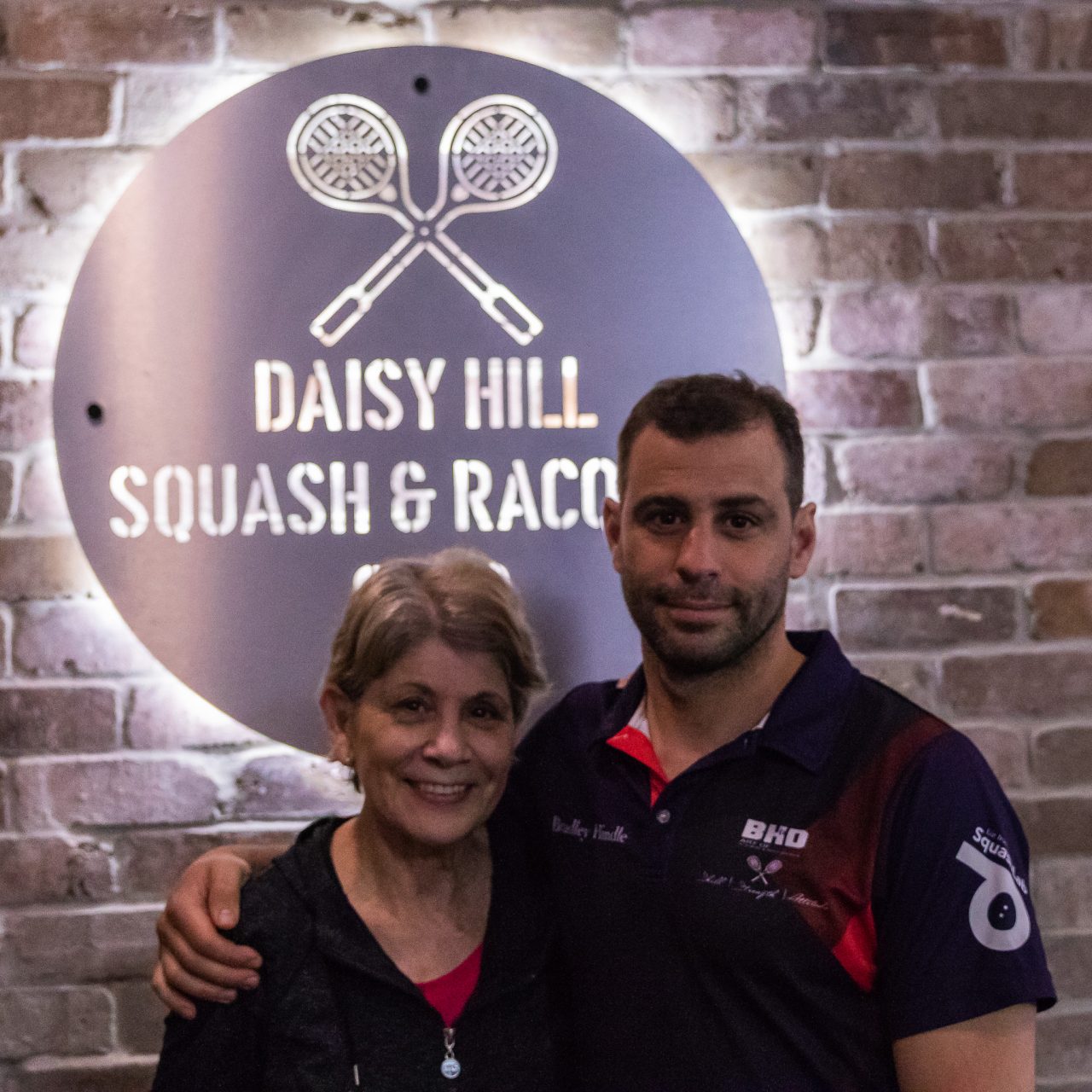 Brad Hindle with his mother Veronica at Daisy Hill

Brad Hindle made a brave decision to head back home to Australia from the sun-kissed Mediterranean island of Malta.

The brave part was buying a squash club. To be polite, the Daisy Hill Squash and Racquet Centre, situated in Logan City between Brisbane and Gold Coast, had seen better days. But Brad is not only an extremely likeable and talented guy. He is also an optimist. And an astute strategist.

His Aussie mate Cameron Pilley has often shared the story of his father, who owned a squash club and a bike shop, saying: “If you want to make a million out of squash, start off with five million.”

Brad has heeded that warning, dealt with some dodgy behaviour from people he thought he could trust, and has now totally transformed the club.

Daisy Hill, with a brilliant squash set-up and a fresh lick of paint, is now changing into ‘Brad’s House’.

In 2019, the squash centre was recommissioned by Geoff Hunt and this marked a new beginning for the business. The centre was looking tired and seriously needed a makeover.

Despite the months of Covid-19 lockdown, that period has been a super busy time at Daisy Hill Squash. Bradley Hindle and his band of helpers have worked tirelessly to transform the squash centre into a sports club.

The newly painted exterior indicate things have changed at the Daisy Hill Centre. At the club entrance, there is a fresh front counter where you are happily greeted by Brad and can pay for court hire or purchase new squash equipment.

The club offers a sports cafe, which satisfies your hydration needs, whether it is an electrolyte boost, a well-made coffee or something a little stronger for those social occasions.

During the day, the polished floor provides a warm, homely ambience to sit back and enjoy a beverage or have a chat. The ambience changes from homely to nightlife when “The Daisy Bar” neon sign lights up the larger communal space. The television screens are playing SquashTV for those members who cannot get enough squash action.

It is not only the communal area that has been refreshed. Six out of the nine squash courts have been rejuvenated with newly painted walls and blue tape. Along with the white paint and tape, LED lighting has been installed which improves the audience viewing. The modern lighting will make the club photographer’s job much easier in capturing those tournament action photographs. This improvement is very much appreciated. Thank you, Brad!

Daisy Hill Squash and Racquet Club was recognised by Squash Australia as the 2019 Australian Club of the Year. This acknowledgment was deserved because of the dramatic increase of members to the club.

The increasing membership can be pinpointed to the positive energy Brad focuses on progressing the standard of all junior and senior players. 2019 was a breakthrough year, as Brad was recognised by the Logan City Council as Coach of the Year. Meanwhile, Queensland Masters Tournament Director and club player Helen Watkins was acknowledged as Sports Official of the Year.

To end 2019, Daisy Hill were crowned back to back Australian Club Champions at Carrara Squash Centre on the Gold Coast. Post lockdown, Brad is reporting record numbers at Club Night sessions as dozens of new members sign up to enjoy the fun on court and the social side of the club.

It is all part of a plan to achieve a genuine connection between the grassroots of the game and Australia’s most famous players.

Brad is supporting our rich Australian squash history. He invites past professional players to the centre for a dedication and celebration which culminates in the signing of a poster.

These events connect club members with our local legends of the sport. Currently, the poster gallery includes Geoff Hunt, Rhonda Thorne-Clayton and Kelvin Smith adding a classy touch to the wonderful, family-friendly atmosphere.

Brad’s vision for a warm, welcoming place to play squash and have a great time is now reality. Hats off to Brad and the team. Congratulations and a huge ‘Well Done’!

The new Sports Cafe will be commissioned and celebrated on August 29 from 4.00pm until late.

We will all raise a glass!

I am a squash photographer based in Logan, Queensland. I mainly cover tournaments from Brisbane, Logan and the Gold Coast. My addiction to squash began in the small town of Innisfail in the 1980s. Enjoyed playing at club level and played tournaments for fun! I completed a Bachelor of Photography in 2016 and began photographing squash the following year. I have been privileged to photograph many tournaments from PSA standard to Novice Juniors.