Bridegroom Karim Gawad ends up the best man in Cairo

Alan Thatcher June 15, 2019 No Comments on Bridegroom Karim Gawad ends up the best man in Cairo 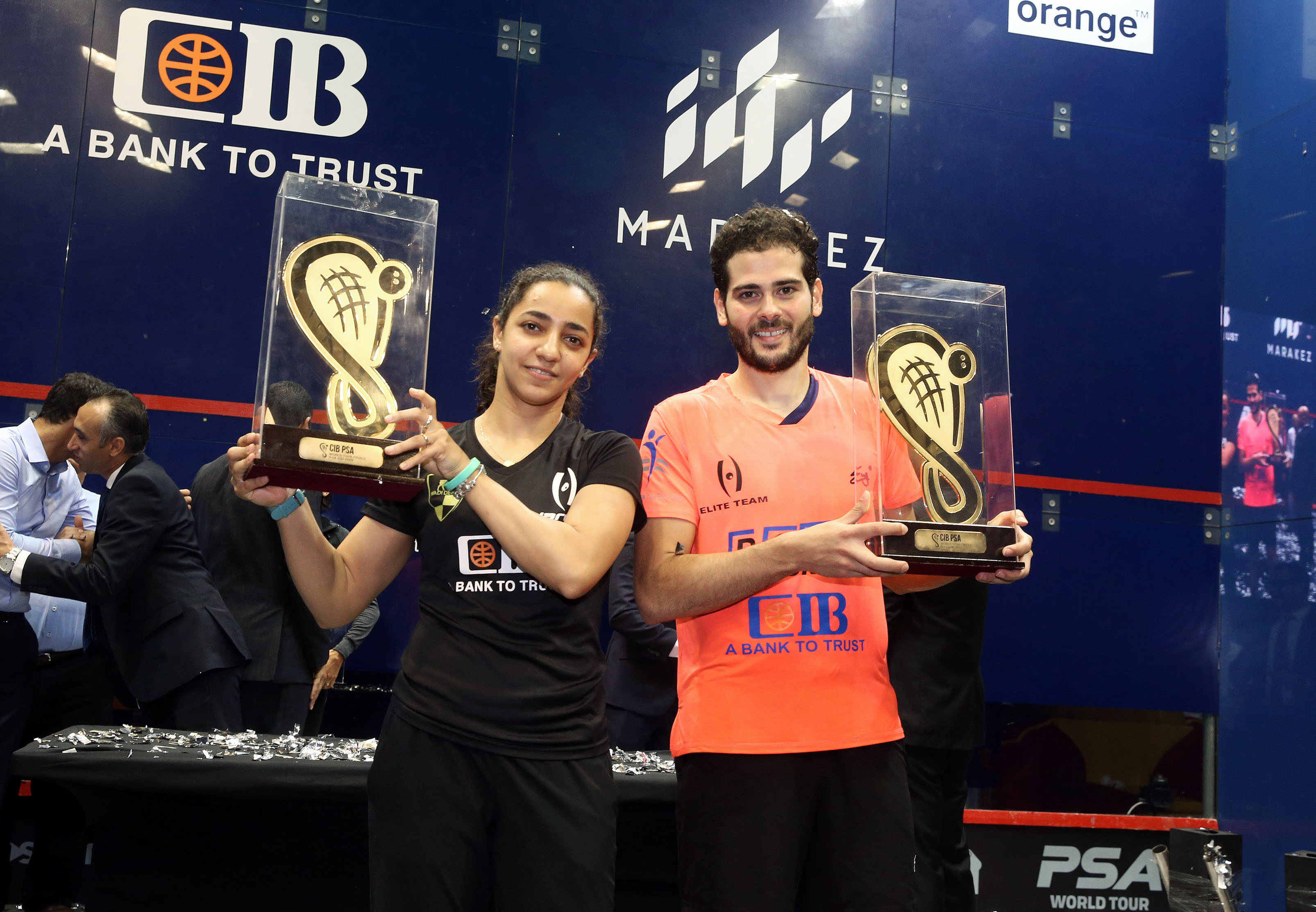 Raneem roars back to win women’s title
By SEAN REUTHE in Cairo
Egypt’s Raneem El Welily and Karim Abdel Gawad are the 2018-2019 CIB PSA World Tour Finals champions as they rose to respective wins over France’s World No.3 Camille Serme and World No.7 Mohamed Abouelghar at Cairo’s Mall of Arabia to take the honours at the final tournament of the PSA World Tour season.

Both players claimed semi-final scalps, with Gawad ending World No.2 Mohamed ElShorbagy’s title defence, while Abouelghar dispatched World No.3 Tarek Momen to earn a place in his biggest final to date.

Abouelghar, the lowest seeded player in the men’s event, downed Gawad 2-0 to top Group A, but found himself on the wrong end of that scoreline as former World No.1 Gawad edged out the opening game, before some clinical attacking into the front corners saw the 27-year-old double that lead.

The third game went the way of Abouelghar as he finally found chinks in his opponent’s armour. The 25-year-old also claimed victory in the fourth, bringing the match back to all square as he looked to emulate El Welily’s comeback victory.

The battle continued into a dramatic fifth, which saw play halted by a succession of video decisions, while court cleaners were also called into action due to the sweat on the floor. Gawad surrendered two championship balls as Abouelghar came back to force a tie-break, but converted on his third match ball as the younger Egyptian struck the tin to hand the match to his opponent.

“If I knew this would happen then I would have got married six or seven years ago,” said Gawad after winning the 21st PSA title of his career.

“Abouelghar was one of my groomsmen, and he gave me a hard time on court, so hard luck to him, he played some amazing squash. I’m really happy to win a World Tour Finals and really happy with this title.

“I have a lot of people to thank. Firstly the sponsors and CIB bank for their support over the last 12 months. They have worked hard and given a lot of support at a lot of tournaments. Thanks to Karim Darwish and all the organisers for organising such a great tournament. It’s always great to play tournaments in Egypt, we have six or seven players in the top 10, so we deserve to have more tournaments here.”

El Welily has been the woman to beat on the PSA World Tour this season and was crowned as the PSA Women’s Player of the Year on the eve of the World Tour Finals after capturing five titles prior to this week and dethroning compatriot Nour El Sherbini to become World No.1.

The 30-year-old from Alexandria has been sensational throughout the tournament, maintaining a 100 per cent record right up to the final and beating Serme to finish top of Group A. But she was off the pace against Serme in the early stages of their final clash. Nerves looked to have to got the better of El Welily, meaning the World No.4 stormed into a two-game lead.

That 2-0 lead would have been enough to see Serme take the win in the group stages or semi-finals, which were played using a best-of-three games scoring format. However, the finals reverted to the traditional best of five scoring, and that played into El Welily’s hands as the Egyptian displayed the trademark winners that have seen her dominate the tour this season to come back and take two games in a row, drawing level.

A tenacious Serme left it all out there on the court in the fifth and was forced to do a lot of running. The physical exertion soon took its toll though as El Welily moved into the ascendancy, and she soon closed out the win by a 3-11, 8-11, 11-7, 11-4, 11-6 to make it seven wins in a row against the French player, while she celebrates the 23rd PSA title of her career.

“I just gave it everything I had [after the second game],” said El Welily, who finished runner-up at this tournament in two of the last three seasons.

“Camille played really well today, she pushed me to the limit and she was just on fire the first two games. It took a lot of effort and mental strength to push myself and come back from what she did. The game plan she had today was crazy good and I salute her for a great season, she has had an incredible season and was so close to winning some things. I’m sure she will come back stronger next season, and I told her that after the match.

“All day long I was struggling with the idea of maybe having to play three games or even five, but when I was 2-0 down, I thought it was best of five for a reason. I just fought and tried to run as much as I can and get everything back to stay in the rally as long as possible. I maybe needed to focus a little bit more, calm down whenever needed, and those words in between games really helped.”

Gawad and El Welily both take home $42,750 in prize money, while this season’s World Tour Finals rewards players with ranking points for the first time in history. El Welily claims the full 1,600 points after going the whole tournament undefeated, while Gawad wins 1,300 points.