World number 95 Ahmad Al-Saraj stunned 3/4 seed Diego Elias in the final of the Under 19 British Junior Open to become the first-ever Jordanian winner of the prestigious Drysdale Cup.

Diego had not lost a single game heading into the final, but the Amman-based Ahmad was inspired as he nullified the Peruvian’s power to win 7-11, 9-11, 11-8, 11-3 in the year-opening event in Sheffield.

Ahmad (pictured right), who received the winner’s trophy from world number one Nick Matthew alongside Girls Under 19 champion Yathreb Adel, was competing in his final junior event and will now target a first PSA Tour title after twice finishing runner-up last year.

But while Diego’s hopes of landing successive British Junior Open titles are over, many predict a bright future for the Peruvian teenager who was recently likened to Jansher Khan by Australian legend Geoff Hunt.

Despite both teenagers overcoming higher-ranked seeds en route to the final, Diego was the overwhelming favourite heading into their first-ever encounter after dismantling number one seed Karim El Hammamy yesterday.

But while many expected Ahmad to be feeling the after-effects of his 73 minute victory over home favourite George Parker in the semi-finals, Diego struggled to gain a foothold as the 5/8 seed ruthlessly capitalised on a combination of errors and loose shots to win the opening game.

The second game continued in a similar vein and a nerveless succession of rallies in the latter stages saw the 18-year-old deservedly double his advantage. However, the Peruvian finally gained the upper-hand in the third game and executed a succession winners to halve the arrears.

But after the excitement of the third game, the fourth failed to live up to expectations as Ahmad repeated his semi-final scoreline to celebrate his maiden British Junior Open title.

Not happy with my squash today, but a great performance during the tournament! Thanks everyone for the support! #VamosDiego #keeptraining

In the preceding boys final, top seed Youssef Soliman gave himself an early birthday present after winning Egypt’s 10th Under 17 title in 11 years with a four game victory over Malaysia’s Eain Yow Ng. 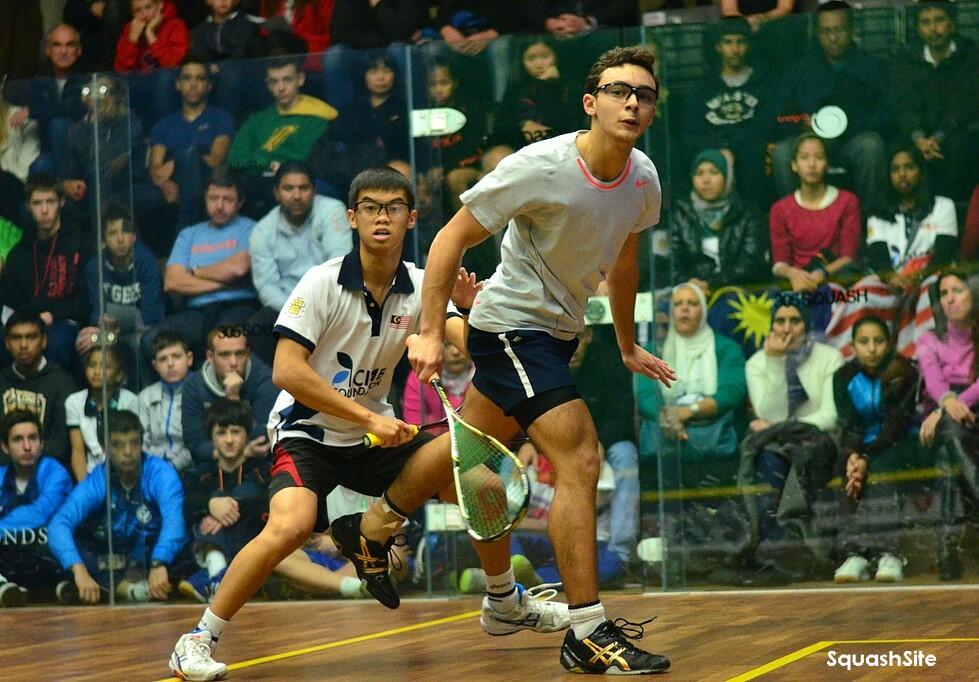 Youssef joins the likes of Nick Matthew, Gregory Gaultier and Ramy Ashour as a multiple Open champion and will be one to watch when he makes the step up to the Under 19 category next year.

In the Boys’ Under 15 final, Youssef Ibrahim won the bragging rights against compatriot Moustafa Montaser with a straight game victory at the Abbeydale Sports Club.

Youssef, 14, was knocked out in the second round last year but put that disappointment behind him as he won a mammoth first game tie-break 15-13, before clinching the next two games 11-9, 11-6.

In the first boys final of the day, top seed Mohamed El Shamy from Egypt fought back from the brink of defeat to win his second British Junior Open crown with a dramatic 11-8, 8-11 , 9-11, 12-10, 11-6 win over compatriot Moustafa Assal in the Under 13 event.

In a match plagued by injury stoppages, Moustafa built a seemingly unassailable 9-4 lead in the fourth game to move within two points of victory.

But despite his opponent being hampered by back and leg problems, a second injury timeout disrupted the 3/4 seeds momentum and Mohamed (pictured right) saved a match ball before storming back to win a gripping tie-break 12-10.

With adrenaline now masking his injury problems, Mohamed took control of the decider to complete a remarkable comeback.

For a comprehensive overview of all the results from every age category, visit the official British Junior Open page.