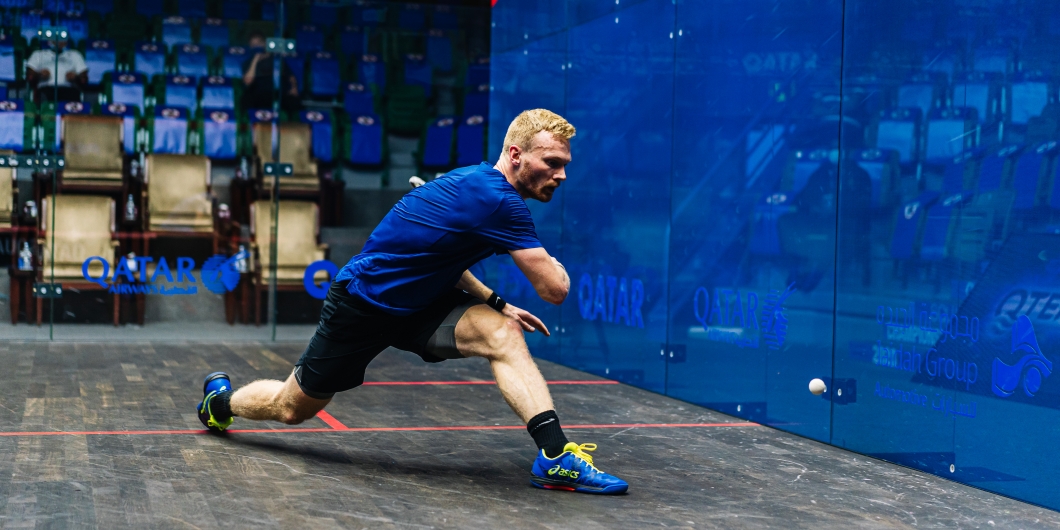 Joel Makin moves into the front left corner in Qatar

British stars Joel Makin and James Willstrop produced outstanding performances to reach the third round of the Qatar Classic in Doha today.

Makin powered past Egypt’s Mohamed Abouelghar in just over half an hour to complete a decisive victory, while Willstrop delivered a high-quality display to subdue Scottish No.1 Greg Lobban in four games in 59 minutes.

In a battle between two players inside the top 12 in the World Rankings, the tournament’s No.8 seed Makin cruised to victory in just 33 minutes.

The Egyptian was featuring for the first time since the Manchester Open, after missing the CIB Egyptian Open due to a positive COVID-19 test. Whether that made the difference or not, he just was not ready for the onslaught that the British No.1 brought to the glass court at the Khalifa International Tennis and Squash Complex.

Abouelghar started well, taking four of the first five points, but then seemed to fall apart in the first game, hitting error after error, gifting Making crucial points, as the Welshman took it 11-7.

He then took the second 11-3 after holding a 10-1 lead, as Abouelghar failed to keep the ball above the tin. Those errors continued into the third game, and although the Egyptian saved two match balls, he succumbed to the Welshman. Makin will now face Frenchman Lucas Serme in the last 16.

“We all know what he can do, he can take it into the front well. Everyone keeps going on about short balls on this court but the line across was crucial there and it didn’t make any difference. You can attack well into the front but you can’t do it if they are stuck behind you, so I did that well,” Makin explained.

“I want to win big events. I have made the semis a few times and I have beaten a few of the top guys but I want to do that regularly, so yeah, I am happy with that.”

Willstrop, who is featuring in his 17th Qatar Classic event and has won the trophy before in 2005, was at his accurate best in the first game to take a one game lead.

Lobban rose to the fight in the second though and found his length to push Willstrop into the back corners, saving two game balls to push the game to the tie-break. Some rapid court coverage from both players ensued with Lobban playing good squash to put Willstrop under pressure and was rewarded with errors from the experienced Englishman to draw level.
World No.18 Willstrop ensured he got his accurate shot selection back on track in the third and fourth though to stay ahead of Lobban in each and close out in 59 minutes.

“He is a real fighter, but his squash is coming on all the time,” said Willstrop.

“I think he’s known for being physical and strong, but honestly the quality of what he is doing at the minute, especially on the left, it was very hard to get a way in. I thought the quality was really good by both of us and I had to play so well, but I was just finding today that I couldn’t find the opportunities at all.

“There were so many rallies down that left side that I couldn’t get a chance because the accuracy on the length was so good. I thought it was a great game and he was unbelievably tough to beat.

“I feel alright and quite fit. We’ve been training all week and it’s just exciting to be on the court now. It’s a bit of a sad situation right now everywhere but we’re enormously grateful and we’re pleased. I’m in a good frame of mind and feeling good.”

Willstrop will face world champion Tarek Momen in the next round.

Elias had never beaten Al Tamimi in three attempts prior to today’s encounter, but came through to win 11-9, 11-4, 11-8. The No.5 seed was also helped by a hamstring strain sustained by Al Tamimi, who was forced off court for an injury break during the third game while 8-6 down.

Elias will take on fellow South American Miguel Rodriguez in the next round. Colombian Rodriguez overcame USA’s Shahjahan Khan in straight games.

“We’ve played all of our lives,” said Elias following the match. “I think the first time we played I was 14 and he was 16. We played a couple of times in juniors and he beat me there also, it’s the first time I’ve beat him here. He is really hard to play, he has so many different shots from the front and I never know what he’s going to do.

“With Miguel, we’ve played four times in PSA but maybe 35 times in South American tournaments and Pan American tournaments. I’ve only beat him once in like 30 times, so it’s always a really tough match. I’ve been watching him since I started playing, so I’m really looking forward to that match and I’m feeling good.”

Meanwhile, Egypt’s Ali Farag began his second reign at World No.1 with a comfortable victory over England’s Richie Fallows, winning 11-9, 11-8, 11-3 in 28 minutes, the shortest match of the round.

Farag is the defending champion in Qatar after beating Germany’s Simon Rösner at the 2018 tournament and needs to reach the final in Doha this week to be certain of retaining the World No.1 spot which is under threat from three-time champion Mohamed ElShorbagy, who relinquished the ranking to Farag two days ago.

“We’ve never played before, but I know how talented Richie is,” said Farag afterwards.

“This is a unique court in a good way in that it takes the ball in very easily, so any bad shot and you’re penalised immediately. All credit to Richie, he played really well. In the first two I couldn’t really find my range, and in the third I was happy I was able to find the corners I was intending to”

Reigning World Champion Tarek Momen made his return to the venue where he won the biggest trophy in men’s squash 12 months ago with a hard-fought 3-1 win over fellow Egyptian Youssef Soliman.

World No.3 Momen, who beat New Zealand’s Paul Coll in last year’s PSA Men’s World Championship final, wasn’t at his best against a dogged Soliman, but did enough to book his place in the last 16 courtesy of an 13-11, 9-11, 11-1, 11-5 victory which will see him play former World No.1 James Willstrop in the next round.

“The issue is we are playing partners and so we play a lot together and that made it difficult today,” Momen said.

“We know each other’s game very well. I was definitely aware of how he has been improving his game. I expected a tough game from him today and I got one.”

Meanwhile, Malaysia’s Eain Yow Ng has earned his spot in the third round of a Platinum event for the third time in four events after the World No.31 took out England’s Declan James with a terrific 3-0 victory.

Yow is ranked seven places below James in the PSA World Rankings but put in a peerless performance to win 13-11, 11-7, 11-8, earning him a third round meeting with Farag.

“Once the tour was suspended [due to COVID-19], I knew it would not be be possible to break in to the top 20,” Yow said.

“I just changed my mindset to being good enough to beat the top 20. I’ve been just believing and training hard to achieve that target of beating guys in that top 20 mark.”