Brits on the charge as Sobhy and Harrity raise home hopes

Alan Thatcher October 7, 2018 No Comments on Brits on the charge as Sobhy and Harrity raise home hopes 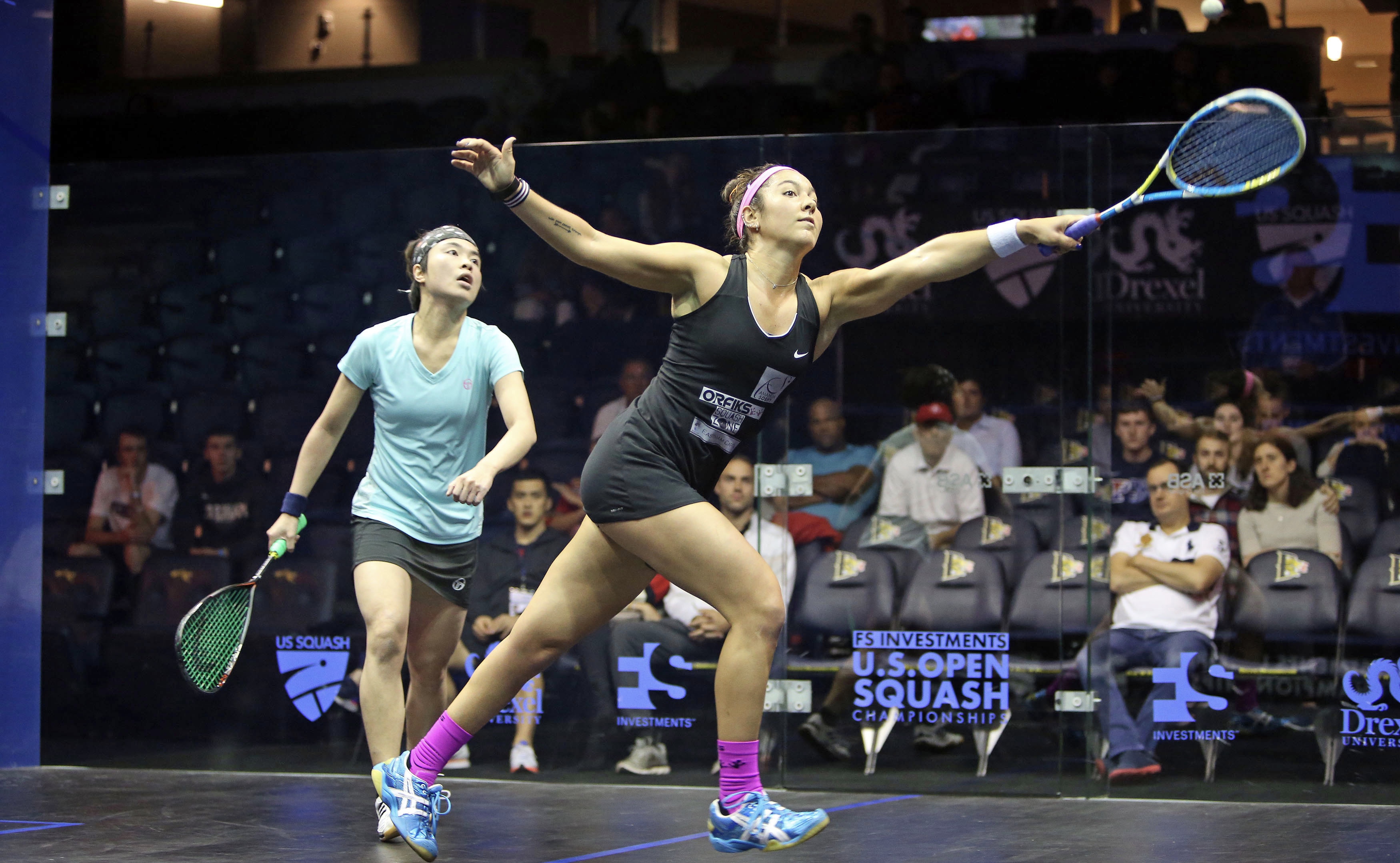 Amanda Sobhy soars to a volley

US Open day one action
By SEAN REUTHE in Philadelphia

Boston-based Sobhy missed out on an appearance at last year’s tournament due to an achilles injury, but she looked eager to make up for lost time in a dominant performance against her opponent today as she powered to an 11-3, 11-9, 11-1 victory in just 24 minutes, and she will take on England’s Victoria Lust in the next round.

“I missed out last year and that was probably one of the lowest times for me and so just to be back here is huge,” said Sobhy afterwards.

“I love this venue. I ended up having to move down to Philly for five weeks during my rehab, so it is like a second home for me now and I know that whenever I’m here I’m in good hands.”

Sobhy was the only one of four female US players to prevail in round one, with her compatriot and tournament wildcard Reeham Sedky falling to capitalise on a two-game lead against Egyptian World No.19 Hania El Hammamy.

Sedky, the World No.68 who currently attends the University of Pennsylvania, was on fire in the opening two games as her hard-hitting style enabled her to catch El Hammamy off guard and she looked destined to earn a second round berth at this tournament for the first time after going 2-0 up.

But she eased off slightly in the third and El Hammamy was able to gain a foothold in the match, with the Egyptian taking the next three games without reply to complete the comeback.

“I had to fight and dig in on every point,” said El Hammamy, who will play France’s Camille Serme next.

“I said I’m not going to give up. I played against her at the end of last season and was 2-0 down and came back to 2-2 but then lost, so I said this time was going to be different and I wasn’t going to let it go.”

Elsewhere in the women’s event, United States No.3 Haley Mendez surrendered a one-game advantage against Egypt’s Nadine Shahin, while Olivia Fiechter, the other women’s wildcard, went down against Australia’s Donna Lobban. 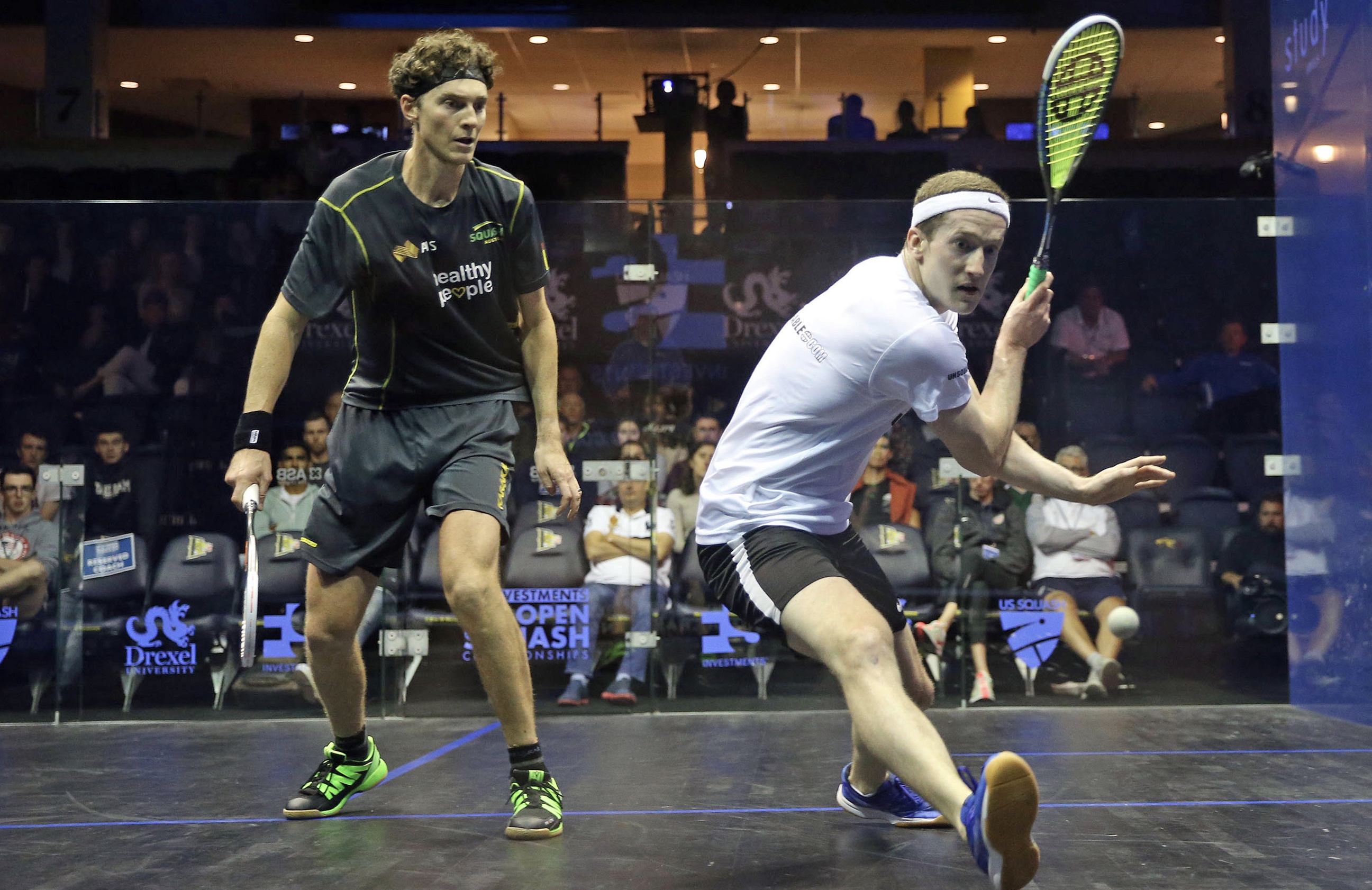 Todd Harrity winds up a backhand drive against Cam Pilley

A trio of American players competed in the opening round of the men’s event, with Harrity, Gordon and Andrew Douglas all in action, and Harrity made it a night to remember as he claimed his biggest ever victory on the PSA Tour with a 3-2 win over World No.23 Pilley.

Harrity, the World No.48 from Wayne, completed a brilliant fightback from two games down to defeat the Australian and will line up against training partner and World No.1 Mohamed ElShorbagy in the next round.

“Obviously he is just coming back from injury so I noticed he wasn’t moving well,” said Harrity following his win.

“But sometimes that’s the hardest thing to cope with because it’s something else to think about and distract you from just playing.

“I wasn’t really feeling my shots and I was trying too hard to expose his movements, but I’m really proud that I didn’t let my nerves get the best of me and ground it out to get the win.”

As Gordon saw his tournament come to an end against England’s James, Douglas went down to France’s Mathieu Castagnet in straight games.

“Credit to him because he is a great player and a fighter and he showed me right up until the last point that the match wasn’t over,” said 31-year-old Castagnet.

“I had to put a lot of effort in to get the win. I love this tournament, I love the crowd. I have so many good memories, I have been number six in the world here and I’m trying to get back to that form and reach the top 20 again and who knows, maybe the top 10.”

Meanwhile, Spain’s former World No.5 Borja Golan exited the tournament after retiring due to injury in his match with Adrian Waller.

A heavy lunge from Waller during the final point in their clash caused some damage to the court floor, meaning the following two matches scheduled for the glass court – which is situated in Drexel University’s Daskalakis Athletic Center – were moved to the side courts while the issue was fixed.

The side courts also played host to one of the day’s biggest upsets when England’s World No.49 George Parker overcame World No.35 Mazen Hesham in five games to set up a second round meeting with Tsz Fung Yip.

Second round action gets under way at 12:00 local time (GMT-4) on Sunday October 7, when 2017 winners Ali Farag and Nour El Tayeb begin their tournaments as they aim to replicate the form that saw them become the first married couple in sporting history to lift the same major sports title on the same day last year.

The action will be shown live on SQUASHTV (Rest of World), Eurosport Player (Europe only) and DAZN (Japan).