Brits surge through as Dutch fail to deliver

Alan Thatcher April 9, 2019 No Comments on Brits surge through as Dutch fail to deliver 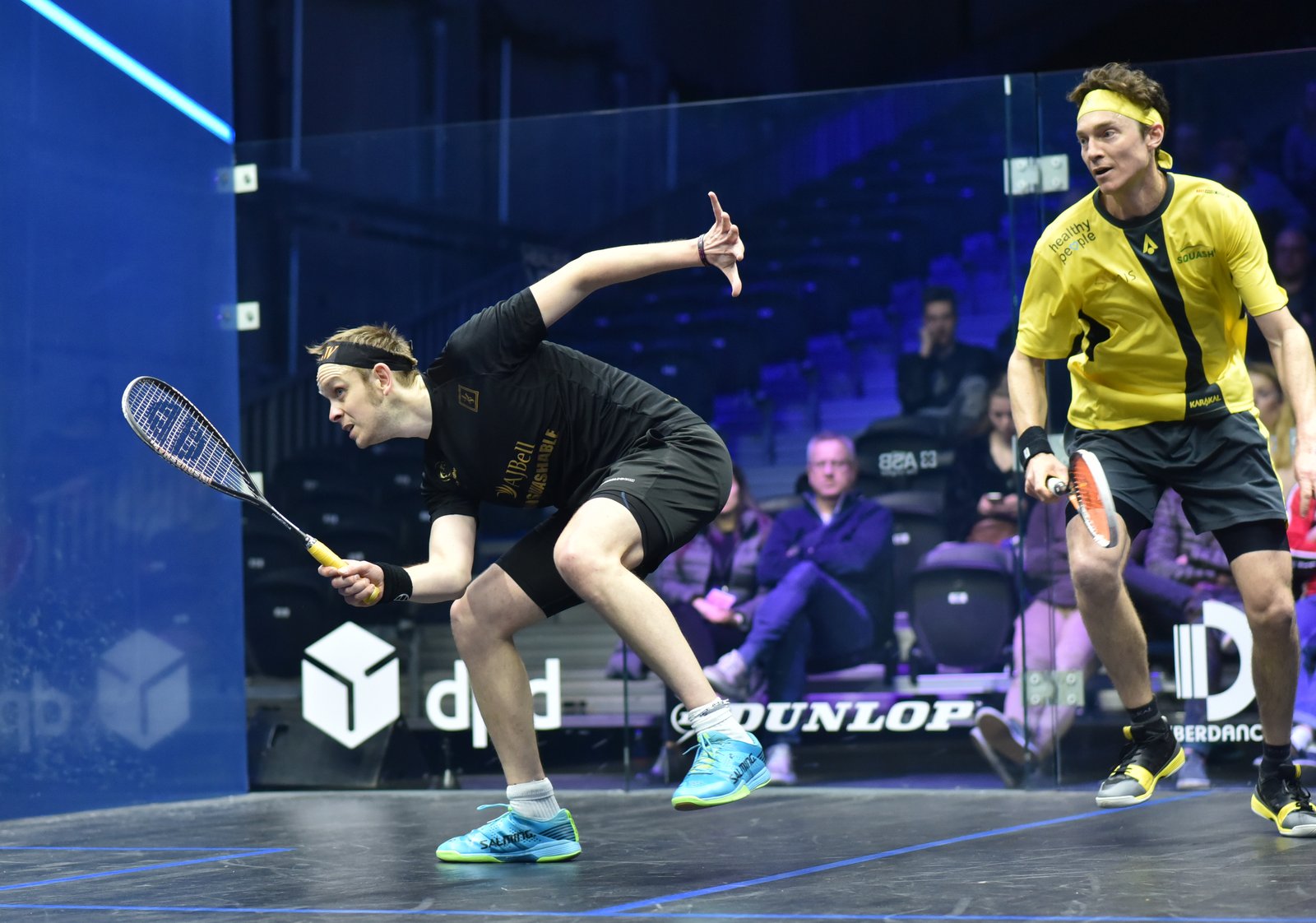 James Willstrop (left) in action against Cameron Pilley in Eindhoven

Willstrop fights back to post victory against Pilley
By ELLIE MAWSON

James Willstrop, Declan James, Joel Makin, Chris Simpson, Daryl Selby and Millie Tomlinson all delivered for Britain on the opening day of action at the 2019 DPD Open Squash in Eindhoven.

As packages whizzed past at the DPD Parcels HQ, Dutch No.1 Milou van der Heijden was unable to post a home win as she slipped to defeat against England’s Tomlinson in round one.

World No.31 van der Heijden fell in front of her home crowd on day one of the PSA World Tour Gold tournament as she succumbed to a 3-1 defeat at the hands of World No.22 Tomlinson inside the brand new DPD headquarters in Eindhoven.

The Englishwoman started strongly and never let up to take the first two-games. A good spell from van der Heijden in the third saw the Dutch player rattle off a flurry of points to pull a game back, however, it was not enough to prevent Tomlinson from booking her place in the second round, where she will now face Egypt’s World No.1 Raneem El Welily.

“I’m relieved,” said 26-year-old Tomlinson following her victory. “Milou had a good win against me in San Francisco a few months ago, so it was good to come out here and get my revenge.

“I tried to increase the pace a bit tonight, she caught me out a lot with her boast last time, so I was prepared for that today.” 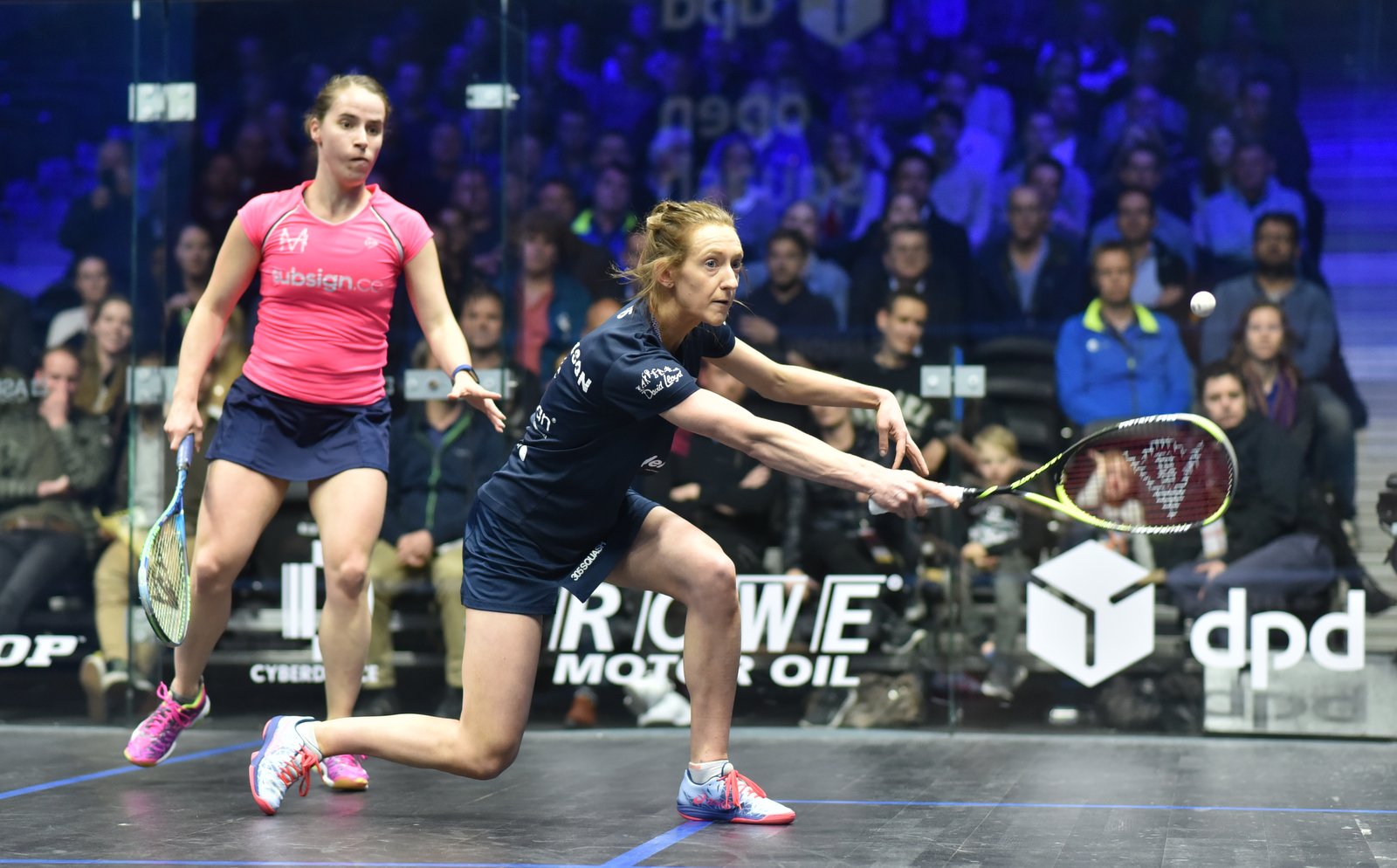 Van der Heijden’s compatriot in the women’s draw Tessa ter Sluis was also unable to make it a day to remember for the home crowd as she was defeated in straight-games by Egypt’s Yathreb Adel, who will now face France’s World No.4 Camille Serme in the next round.

Meanwhile, there was joy for eight-time World Champion Nicol David, who resides in Amsterdam, after she overcame Egypt’s World Junior Champion Rowan Elaraby in four games to set up a mouthwatering second-round tie against reigning World Champion Nour El Sherbini.

“I knew coming in here I had to be solid and in the second game when I let my guard down, she took it,” said former World No.1 David following her win. “I knew what I had to do in the third and fourth and I was very pleased with my focus. I’m very pleased to be playing in front of a Dutch crown and back in Holland again.”

Elsewhere in the women’s draw, former World No.1 Rachael Grinham rolled back the years as she prevailed against America’s Olivia Blatchford Clyne in a five-game thriller on the sidecourts at Squash Time in Eindhoven.

“Nowadays, I just try to enjoy my squash as much as I can, because the more I’m relaxed, the more I play well,” said former World Champion Grinham.

“I always try and tell myself not to go for too much, but in the fifth, I told myself that I had to make her work hard for it and win the points instead of me giving them away.”

She will be joined in the second round by Canada’s Hollie Naughton after she upset higher seeded opponent Emily Whitlock to advance at the tournament.

The Canadian enjoyed a five-game battle with the Englishwoman to secure a second-round berth where she will face England’s former World No.1 Laura Massaro. 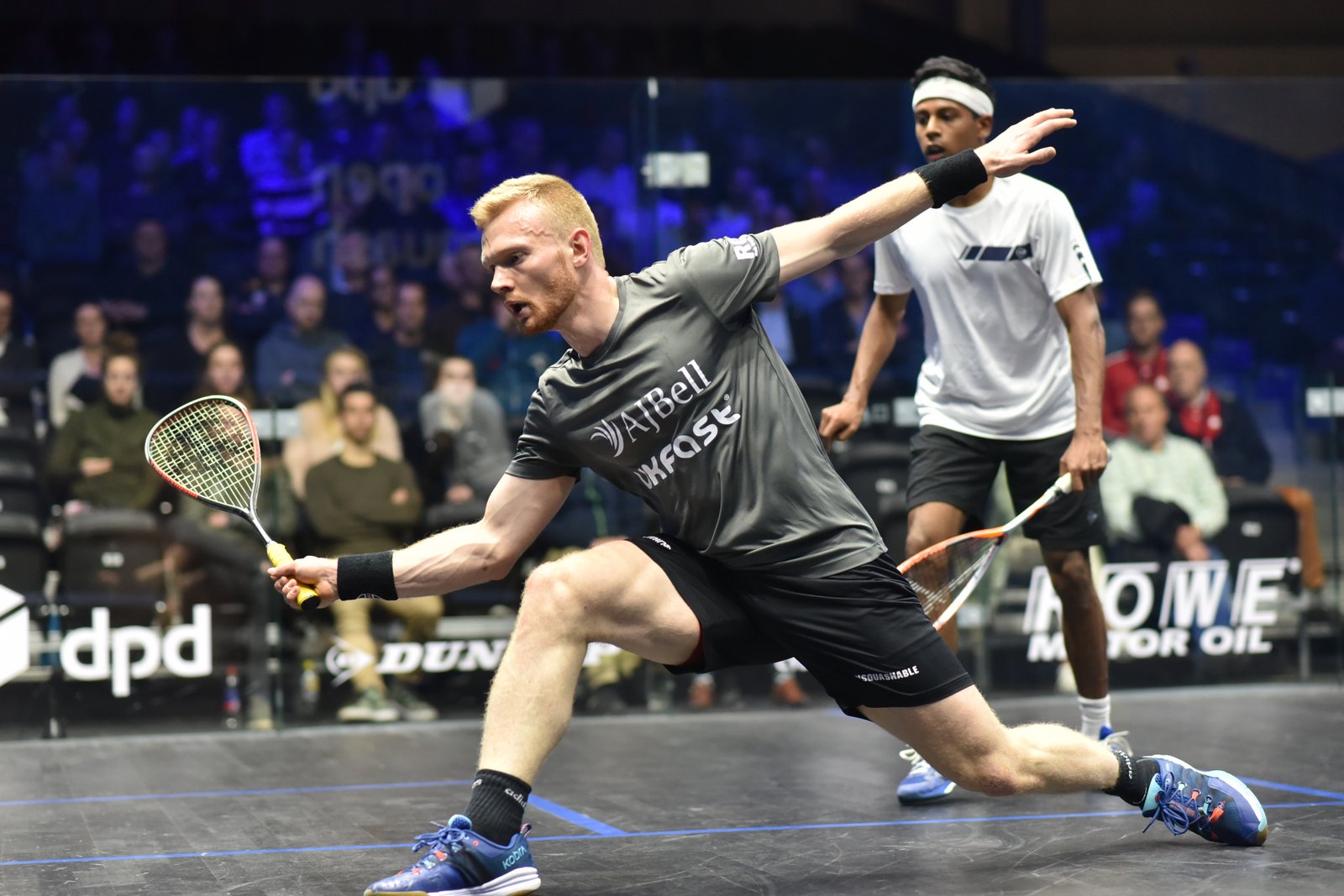 Joel Makin jumps on the ball in Eindhoven

In the men’s draw, Wales’ Joel Makin ended Dutch hopes as he put wildcard Roshan Bharos to the sword in straight-games.

The Welshman was comfortable on court to dispatch the Dutch hopeful by an 11-3, 11-4, 11-5 scoreline and will now face Egypt’s Marwan ElShorbagy for a place in the quarter-finals.

“Me and Roshan played a bit of juniors together,” said the 24-year-old Welshman. “I know Roshan because he trains in Bristol, which isn’t too far away from me. I know he’s working hard there and trying to improve his game.

“He’s got some nice skills, so hopefully those will give him the points to go up a little bit more now.”

Meanwhile, England’s former World No.1 James Willstrop battled back from the brink of defeat against Australia’s Cameron Pilley to book his place in the second round.

The experienced duo had faced each other seven times in the past on the PSA Tour, with Willstrop claiming all of those wins, however, it looked as though Pilley was finally going to break that run when he went 2-1 up. Willstrop dug in deep though and showed his resilience to produce a masterclass in the fifth game and take a 6-11, 11-7, 8-11, 11-9, 11-5 victory.

Willstrop will now face World No.1 and reigning World Champion Ali Farag in the next round.

“It was very hard against Cameron,” said the Commonwealth Games Gold medallist. “I never know where he is going to put the ball, there is so much hold and deception. He’s really hard to play against and we have been playing each other for years.

“The energy levels will need to be topped up after the first two days. It’s a great venue, great new tournament and the atmosphere is good tonight and I’m looking forward to playing Ali [Farag] and hopefully it will be another good atmosphere.”

The tall Englishman played with maturity to avenge his defeat to the teenager at December’s Black Ball Open and will now face Egypt’s Mohamed Abouelghar for a place in the quarter-finals.

“I tried to leave emotions out of it,” said James following his victory. “I had a very professional attitude and I’m happy with the level of squash I played.

“I’m playing Abouelghar tomorrow and I can’t wait. The last time we played it was a hard 3-2 in Chicago. I can’t wait to be back on the glass court having a huge battle because I feel that’s where I belong now.”

He will be joined by Daryl Selby in round two after he overcame France’s Lucas Serme in a gruelling 80-minute encounter, while George Parker was unable to make it a clean sweep for the English after he fell to defeat at the hands of Germany’s Raphael Kandra. 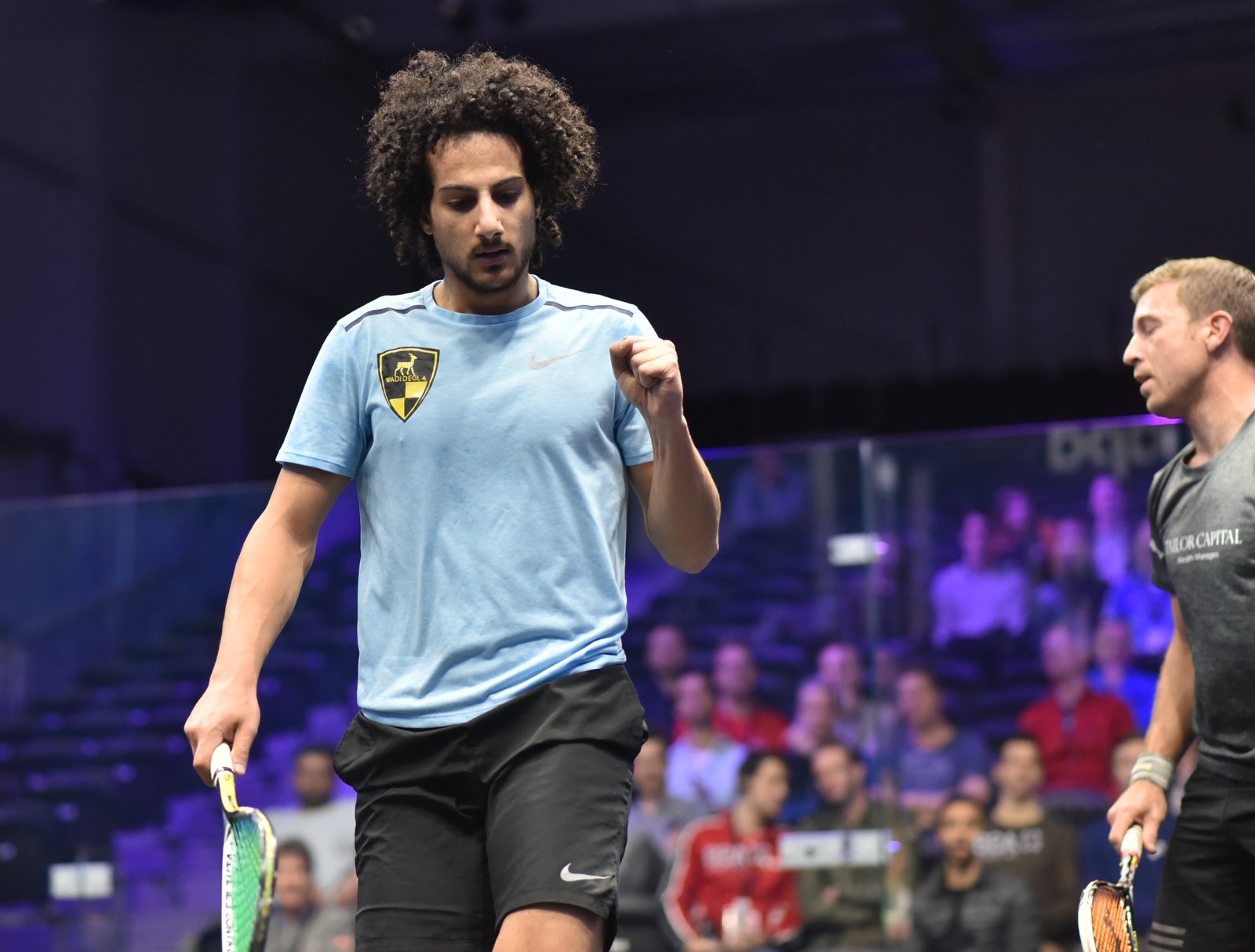 The talented Egyptian dominated on court in the opening exchanges against Castagnet to take a 2-0 lead, before the Frenchman began to battle back in the third to reduce the deficit. However, Hesham was able to remain mentally strong to close out the victory by an 11-8, 11-7, 4-11, 11-8 scoreline.

“I think playing Castagnet you can never give him an inch to get back into the match because he will just keep on fighting and fighting,” said the Egyptian following his round one win.

“If you have watched me recently then I am playing so much better than the last few months. I’m getting back better and better slowly and hopefully I can keep going up.”

The second round takes place on Wednesday April 10 at 12 noon local time (UTC+2) and the action will be broadcast live on SQUASHTV (rest of world), Eurosport Player (Europe only) and the official Facebook page of the PSA World Tour (excluding Europe and Japan).