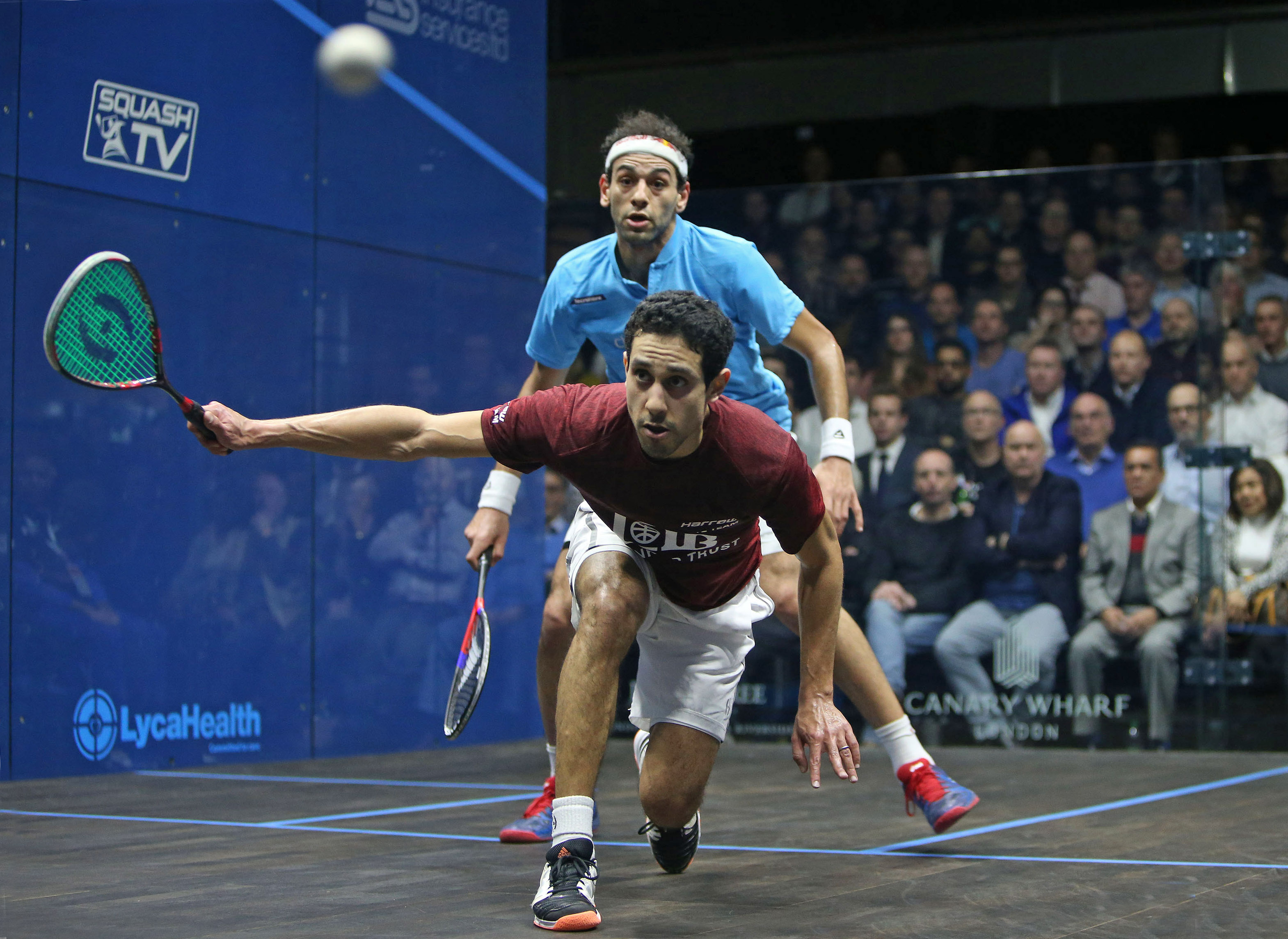 Tarek Momen, runner-up at Canary Wharf last season, is back this year aiming to go one better. In this insightful interview, he talks revealingly about his amazing Egyptian rivals, his delight at another major tournament coming to the Pyramids, and his thoughts on squash’s latest Olympic setback.

1: Tarek, welcome back to Canary Wharf. It’s been quite a year. Last season you beat Ali Farag in the semi-finals and lost an epic final against Mohamed ElShorbagy. What are your favourite memories from Canary Wharf last year?

A: Definitely winning that semi-final match was one of my favourite memories from last year. Beating Ali is never easy and I was very proud of my performance that day. Also the night before, getting through a nerve wrecking best-of-three match with James Willstrop was a memorable one for me, too.

2: Less than two weeks ago you reversed those two results, beating Mohamed in the World Championship semi-finals and losing to Ali in the final. How much did that 97-minute semi-final affect you the following day?

A: I tried not to think about it the next day going into the final, all I could think of was trying to leave everything on court and fight till the very end. I thought I did a very good job until that 13-11 tiebreak in the third, but eventually when I lost that game I started feeling the effects of that semi-final and the tough ones I had before it as well.

3: What parts of his game do you think Ali has improved on to become world number one and world champion?

A: Ali moves so smoothly on court, he likes to move his opponent around and extend the rallies until his opponent breaks down. I think a lot of people find it very difficult to keep up with this kind of play and because he’s very consistent at it, a lot of players started to break down a bit earlier than they used to. This helped him get to the latter stages of big tournaments relatively fresh and it plays a big role in the outcome I guess.

4: On your last tournament visit to London, of course, you beat Ali in the final of the Channel VAS Classic at St. George’s Hill. Another massive five-setter lasting 87 minutes. That must have felt good?

A: Yea, that was a special win, ending a four-year title drought. I’ve been trying so hard to win big titles but wasn’t able to convert in the final, so to be able to do that by beating an in-form player like Ali was extra special.

5: What were your overall feelings about the new venue in Chicago’s Union Station?

A: I liked the venue despite those really loud train announcements haha, but it’s a cool venue and the semis and final matches had more people coming in to watch so the atmosphere was great towards the end.

6: I saw you hitting a massive number of “figure of eights” with the Interactive Squash front wall. What did you think of it?

A: I think interactive squash is a great addition to our game, it gets the crowd engaged and the kids love it. Great tool to attract people to our beloved sport.

7: Would you like to buy one to train on, or maybe for parties?

A: I don’t think I need it for practice but I think it’s nice to have during tournaments to show statistics, heat maps and other stuff like player introductions and video reviews. It could also become an excellent training tool for younger kids trying to shoot targets and get high scores.

8: It was good to see a new tournament at the new Black Ball Club in Cairo in December. Please tell us a little about the club.

A: It’s a new club involving multiple sports but the main focus is squash. It has around 17 regular courts and a Glass court. The facilities are in excellent condition and it’s becoming the main hub for big events. Only two weeks ago the Egyptian Nationals were held over there, too.

9: You lost to a resurgent Karim Abdel Gawad in a 90-minute semi-final. It’s good for the game to see Karim playing well again. What do you think he is doing differently?

A: Karim is a very talented player, very smart on court and reads the game pretty well. He doesn’t need to do much differently, when his game is on point he’s definitely tough to beat.

10: Raneem must be delighted to see the 2019-20 Women’s World Championship being staged at the Pyramids later in the year. With a men’s tournament running alongside, it must be something special for you both to look forward to?

A: Of course, we grew up watching this amazing tournament (the Al-Ahram) back in the 90’s with Barada, Jansher, Nicol, Power, Shabana and so many other legends of the game. The venue is one of the best in the world and it’s on our home soil. So we have to be really excited about this being the top players now, 20-25 years later.

11: With squash staging amazing tournaments in wonderful locations, it must be desperately disappointing to see our Olympic ambitions blocked once again? What were your thoughts when you heard that break-dancing had got the vote ahead of squash?

A: It was very disappointing of course but it was clear to me there was much more to it than just the merits of one sport. It’s more about selling tickets and making profits at the moment, irrespective of what the discipline is. I could easily fill up a stadium by putting together a great stand-up comedy show, so the question is: Where to draw the line? Are we looking to include real sports or are we heading towards the entertainment business?
I think we need to focus more on making this sport grow and stop trying so hard to get into the Olympics. One day when we’ve established ourselves may be the IOC would come running after us.

Thank you, Tarek. And good luck this week at the Citigold Wealth Management Canary Wharf Classic.