Alan Thatcher May 24, 2019 No Comments on Champions out: Sarah-Jane Perry sinks Nour El Sherbini and Mohamed El Shorbagy gets his revenge over Miguel Rodriguez 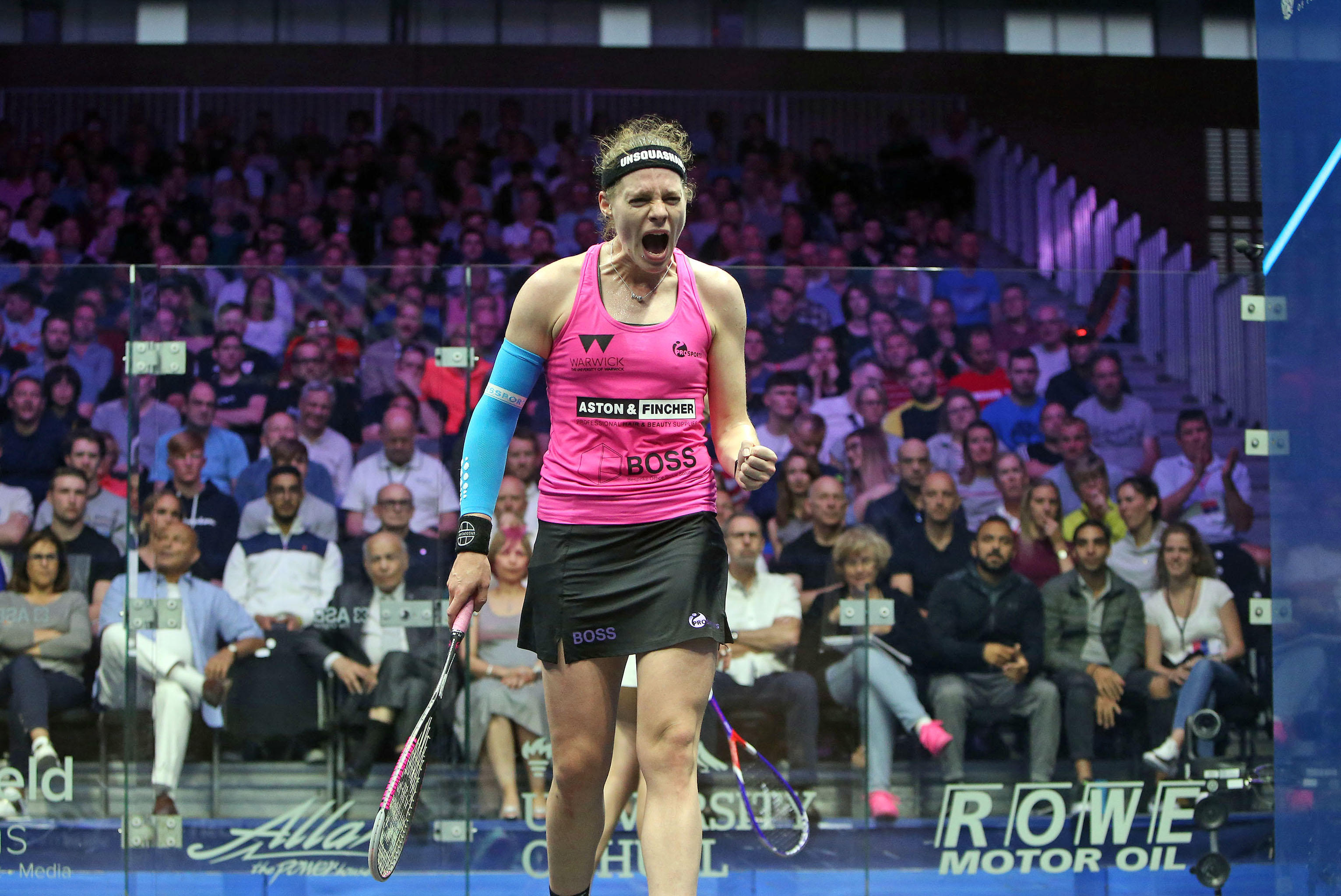 Perry, the 2017 British Open runner-up, has taken a while to get back to full fitness after undergoing elbow surgery in December, but the World No.6 played some of her best squash to recover from a game down, winning 8-11, 14-12, 11-7, 11-8 to reach her first Platinum semi-final since November’s Hong Kong Open.

The 29-year-old from Birmingham was at the mercy of a rampant El Sherbini in the opening game as the World No.2 played some sumptuous attacking squash to take a one-game lead.

The two-time British Open winner looked set to double her advantage as she opened up a 7-2 lead in the second game, but a dogged Perry stayed in the rallies and came back to take the game on the tie-break. From there, the Englishwoman rose to the occasion and outplayed her opponent in the next two games to complete an 8-11, 14-12, 11-7, 11-8 victory in 49 minutes.

“I don’t really know how I won that,” said Perry. “As everyone saw, I was very down in that second game, I actually told myself ‘don’t worry about this game, just play your way back in like you did in the first game’ and then every time I won a point the crowd was right behind me, and that helped.

“I just wanted to keep the home crowd happy and have some home fans cheering me on tomorrow. I’ve got a tough match tomorrow, but it’s great to see the crowd packed. We don’t get to play in England that much so it’s fantastic and thank you to everyone who has put the tournament on.” 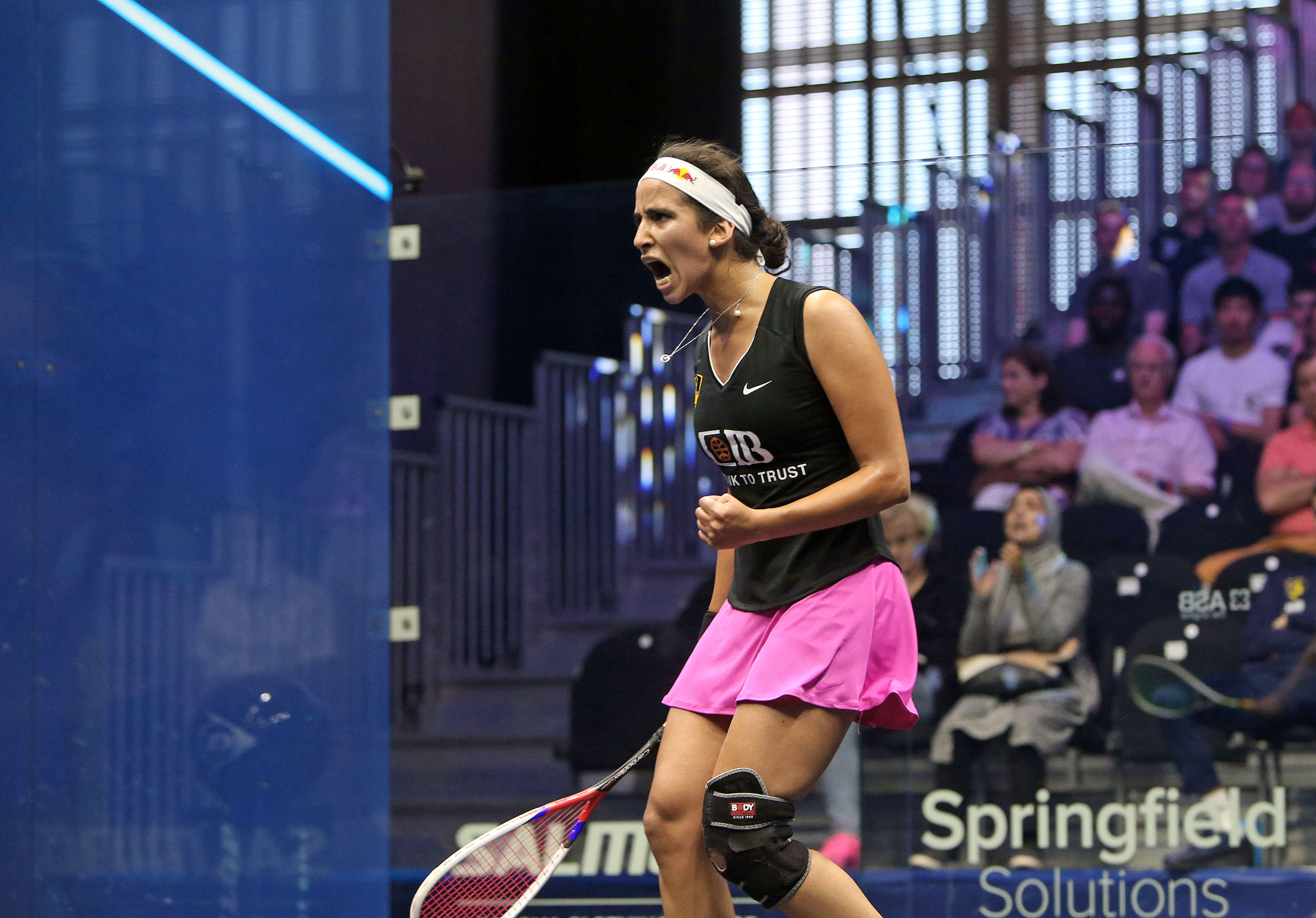 World No.1 Raneem El Welily also fell on quarter-finals day as she went down in straight games to a rampant Nouran Gohar, meaning both of last year’s women’s finalists have crashed out of the tournament.

Gohar had lost her previous six matches against El Welily – including in last month’s El Gouna International final – but her trademark hard-hitting style was in full flow in Hull as she crashed the ball around the court to win 11-9, 11-7, 11-5 in the day’s opening match.

“She has beaten me in the last three tournaments,” 2016 runner-up Gohar said. “It has been so long since I have beaten Raneem, and I think the head-to-head shows that. I’ve beaten her one or two times on the PSA Tour, so it is huge for me today.

She will take on World No.3 Nour El Tayeb in the semi-finals, with El Tayeb putting in an immaculate performance to dispatch New Zealand’s World No.4 Joelle King 11-8, 11-3, 11-6 in just 28 minutes. 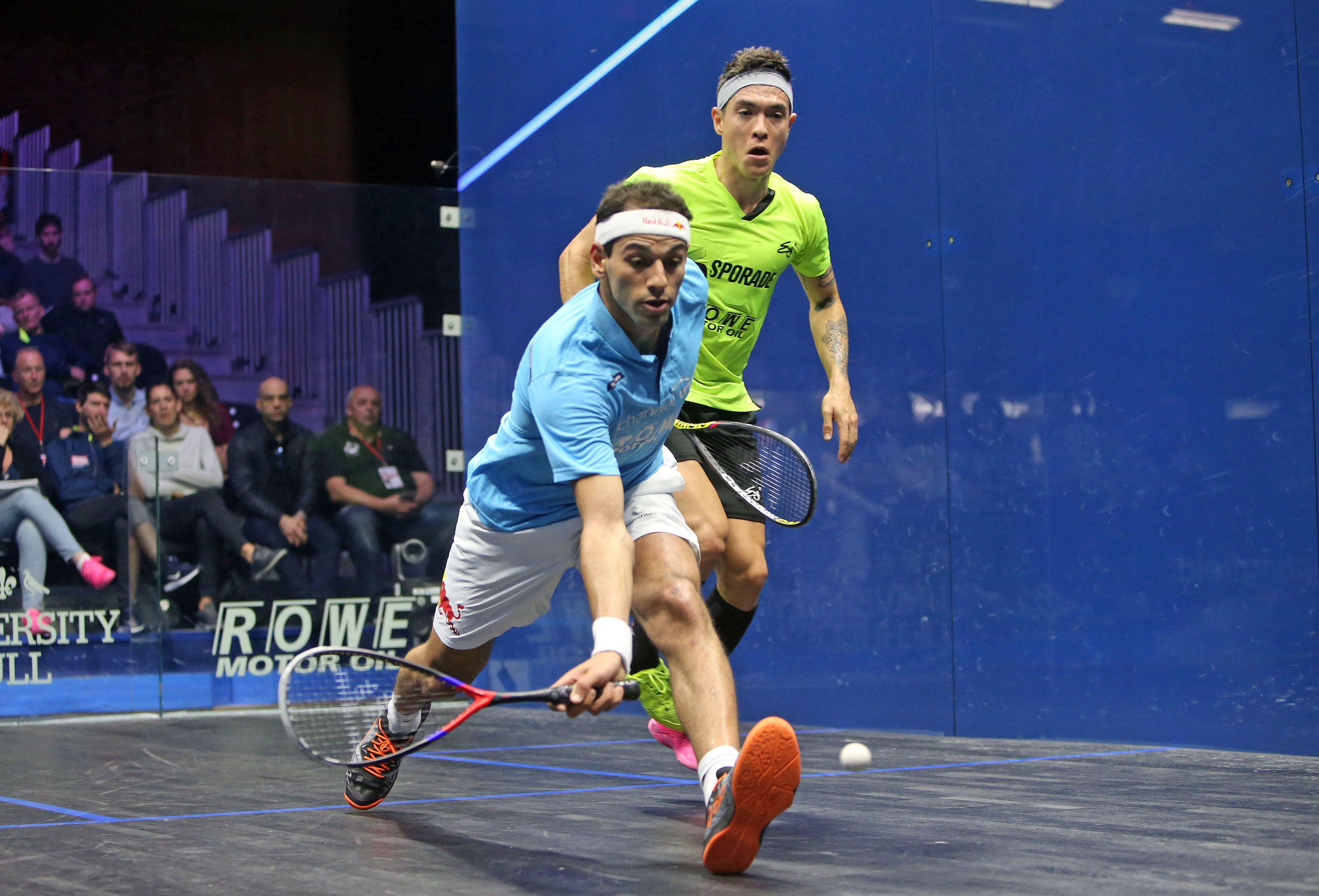 In the men’s draw, World No.2 ElShorbagy avenged his defeat to Colombia’s Miguel Rodriguez in last year’s final. The 28-year-old stormed to an 11-6, 11-5, 11-9 victory to move to within one win of a fourth British Open final.

ElShorbagy and Rodriguez contested one of the greatest finals in the tournament’s 90-year history 12 months ago, with the latter winning a five-game, 102-minute epic to become the first South American ever to win the iconic trophy.

ElShorbagy has won all four of their matches since that match though, and the form book was never in danger of being thrown out of the window as he powered to the win in straight games.

“Miguel is, of course, a very dangerous opponent, and when he is playing well, he is one of the toughest opponents to play on tour,” ElShorbagy said after the match.

“Every situation is different and I have been in a lot of situations in my career where I have had to perform differently to try and get the best result possible to be able to come back the next day and still be able to perform at my best.”

Former World No.1 Karim Abdel Gawad awaits ElShorbagy in the semi-finals after he defeated Germany’s World No.5 Simon Rösner 3-2 in a gripping, 89-minute encounter, which is the longest match of the tournament so far. 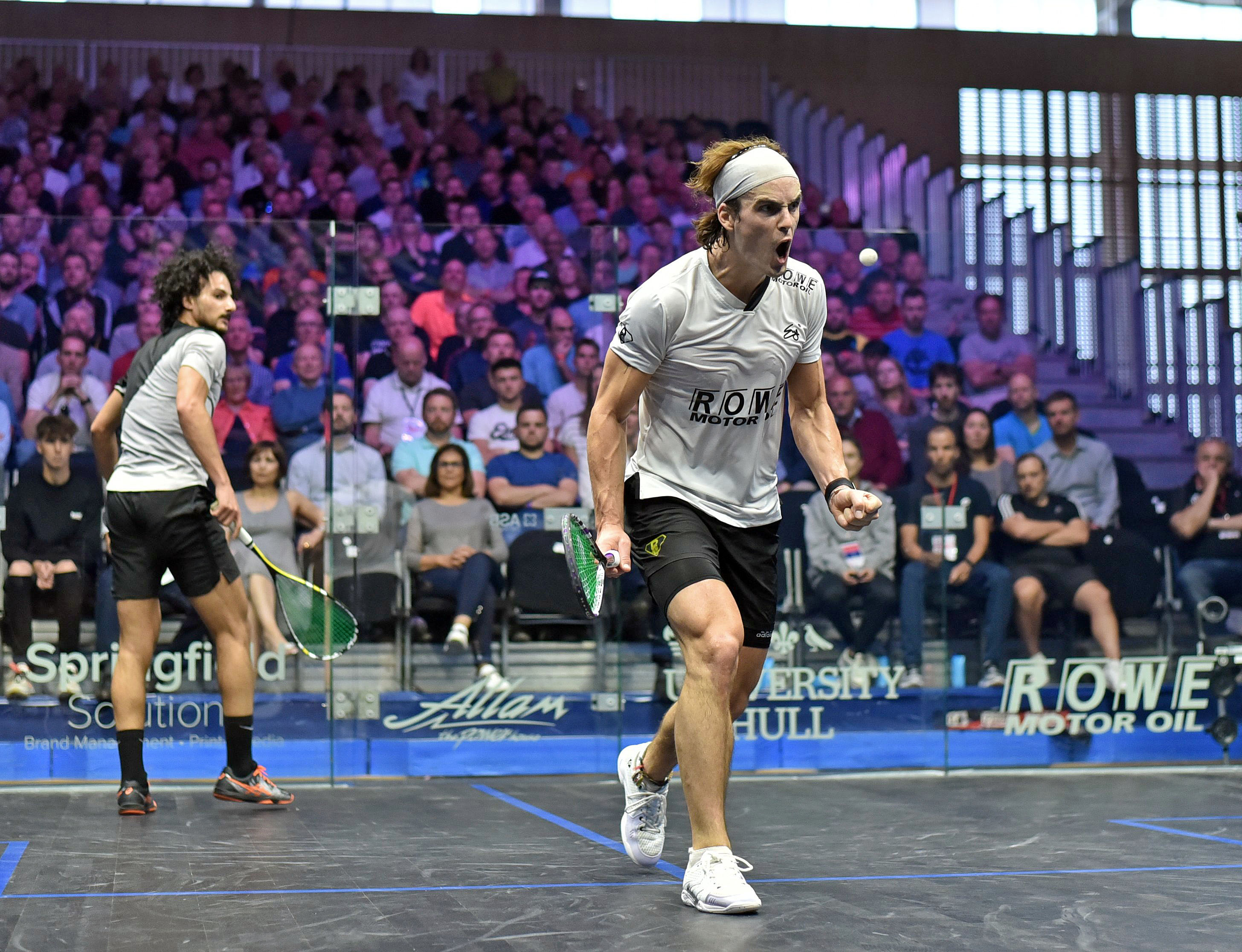 Paul Coll is delighted after seeing off Mazen Hesham

New Zealand’s Paul Coll also advanced to the last four as he became the first Kiwi in 30 years to reach the semi-finals of the British Open. The World No.6 twice saw a one-game lead slip through his fingers against World No.34 Hesham, but put in a composed performance in the decider to close out the win.

Coll, 27, is the first New Zealander since Ross Norman in 1989 to claim a semi-final berth, and he will now look to end a seven-match losing streak against World No.1 Ali Farag, who beat fellow Egyptian Mohamed Abouelghar to reach the semi-finals here for the first time.

“It’s coming towards the end of the season, and my body is one piece and feeling match fit, so I’m taking each day as it comes and just trying to keep it together and keep pushing, I’m looking forward to my next semi-final today,” Coll said.

“I have massive respect for Ali, he has achieved so much, on and off court he is a deserving No.1, but that doesn’t mean tomorrow that I’m not going to come out and try and smash him.” 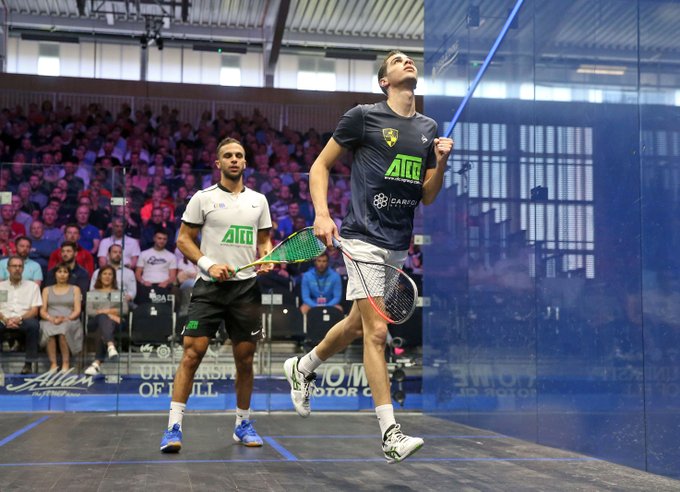 Ali Farag gets the better of Egyptian rival Mohamed Abouelghar