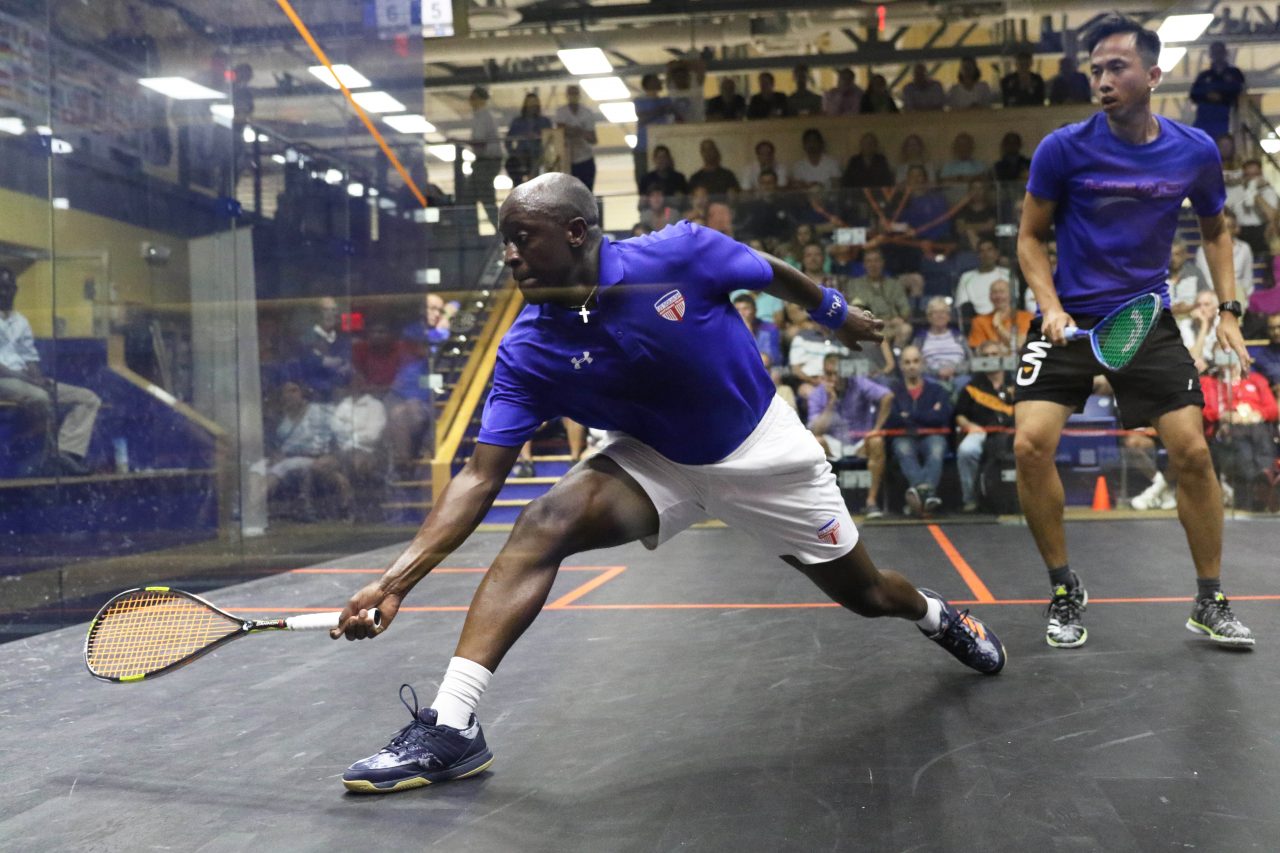 You run out of superlatives talking about what a marvellous facility the McArthur Squash Centre is in Charlottesville, venue for the 2018 World Masters.

With 12 glassbacks, a three-sided glass court and a full glass showcourt taking centre stage at the brilliant Boars Head sports centre and resort, it is one of the most magnificent squash clubs in the world.

Squash has been spoilt not only with the facility, but also by a host of social events in a wonderful camaraderie and friendly atmosphere where many have rekindled friendships of old and forged new ones.

Day six and 1,600 or so matches on, semi-finals day arrived here in Charlottesville, with many familiar faces, and some new ones in the over-35 age group, powering through to the finals.

In the Women’s draws, England leads the way with seven of the finalists, Australia next with six, the USA with three, and Canada and South Africa one each.

Dope testing was conducted today for the first time this week, something Masters players are not accustomed to and will have to get used to in the years to come.

Taking medications requires a TUE form, which needs to be sent to the governing body and/or WSF, in the case of a World event such as the world masters, of the event.

It has caught a few by surprise, I am certain, by ignorance rather than efforts to enhance performance.

Players from the US, I have been hearing, have really embraced the spirit of this event and many are talking of playing the next in 2020, in Poland.

A dramatic slate of 35 semi-finals saw Australia emerge in front of the pack with a tournament-leading nine finalists and England close behind with eight, while Canadians won four out of six semifinals Friday at the McArthur Squash Center in Charlottesville, Virginia.

Team USA’s first breakthrough came in the form of 75+ five seed Joyce Davenport upsetting South Africa’s top seed Jean Grainger in four games. Both players entered the match with a 3-0 record in the six-player round robin, and now Davenport just needs to defeat Slovenia’s six seed Mariza Ohlsson to clinch what would be her second World Masters title, which she is quietly confident of.

“Jean was the key person to beat in the tournament,” Davenport said after the win. “She’s a good player, and adjusted pretty well during the match. If she hadn’t adjusted so well I could have gotten through in three, but she got better as the match went on, improving her length and serves. I had some opportunities in the third and fourth, but I couldn’t take them—including a match point. I can have one drink tonight, but probably just one.”

Davenport won the 50+ World Masters title in the 1992 tournament hosted by Vancouver. Grainger and Davenport share a long history together in not just squash, but also tennis. 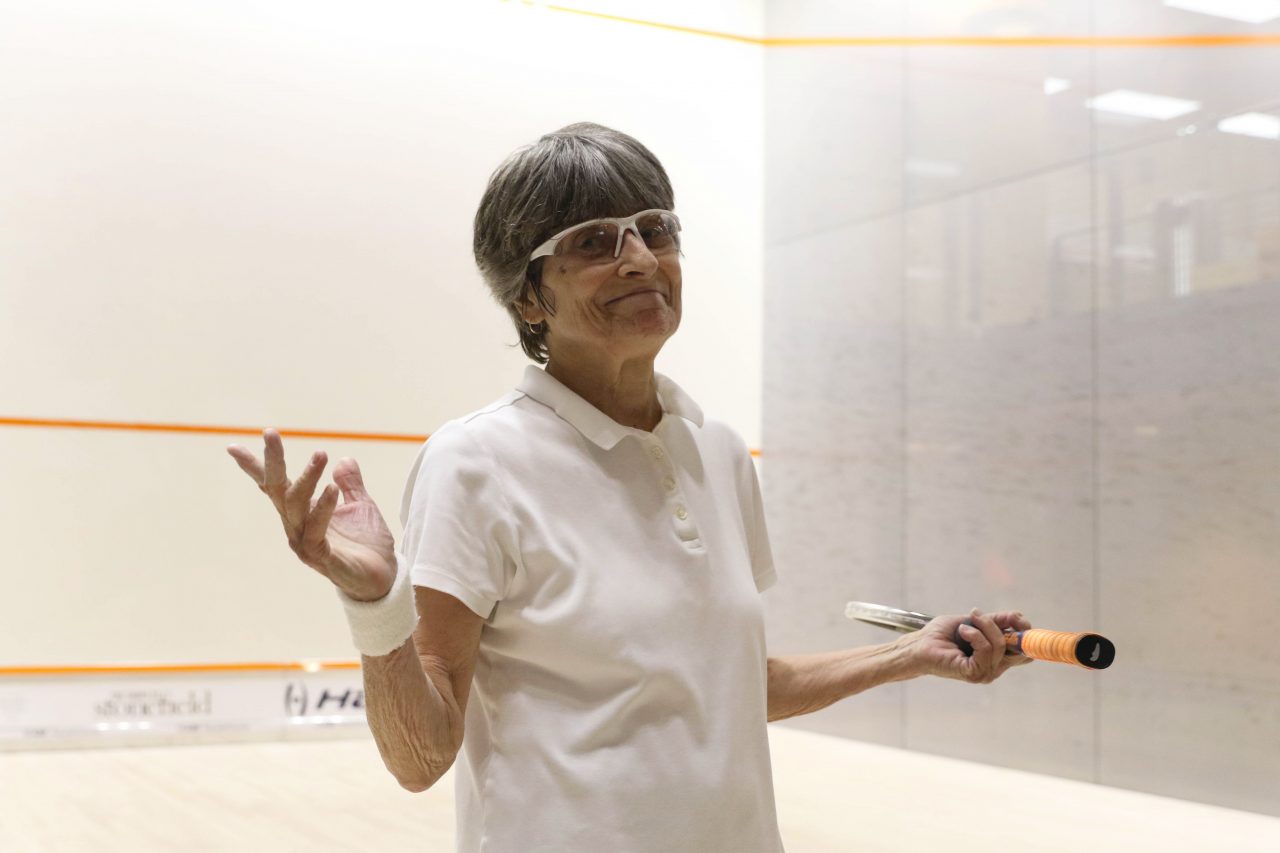 “I was actually hosted by her family in England for a few weeks when I was eighteen years old,” Davenport said. “Her mother was the nicest hostess I’ve ever had in all my years playing squash and tennis, she was the loveliest woman. I told her that before the match. We also have both played Wimbledon and U.S. Open tennis, so we have some history and parallels.”

The most dramatic match of the day came in the Men’s 55+ division between England’s two seed Jeremy Goulding and unseeded Mexican Juan Mendez, a former hardball singles professional. Mendez fought off two match balls in the fifth game to win the match 12-10 in front of a roaring audience. Mendez is the only unseeded player in the tournament to reach a final, where he will face Australia’s Geoff Davenport. 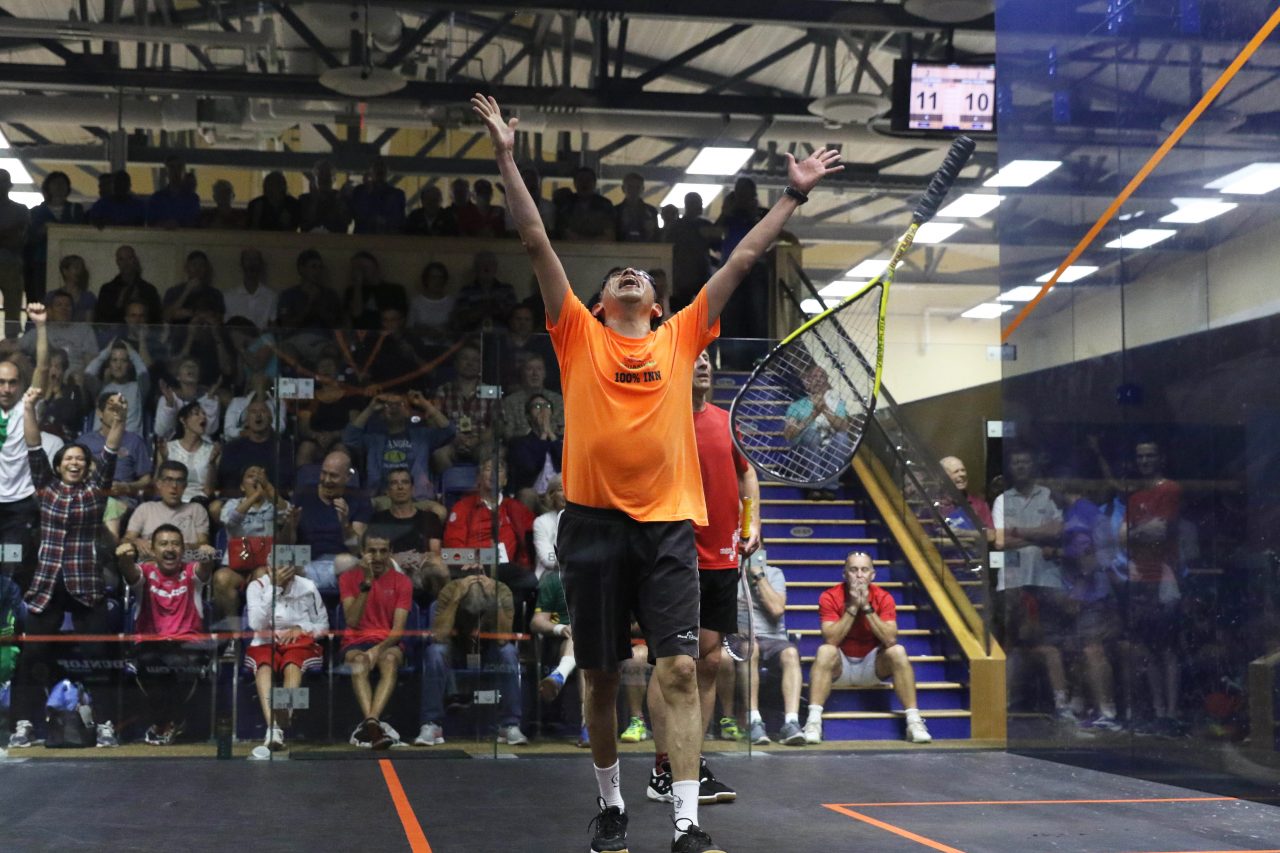 Team USA ended the day as it started—with mixed fortunes. Women’s 50+ three seed Hope Prockop lost out against Canada’s fifteen seed Lauren Wagner, who continued her unexpected run to the finals with a three-game upset over the American. Natalie Grainger followed on court by maintaining her unbeaten World Masters record in a decisive three-game victory to reach a second consecutive final.

The last match of the day featured Team USA’s Patrick Chifunda, who heads the squash program at the Country Club of Virginia in nearby Richmond. Chifunda advanced to the men’s 40+ final after a three-game win against Hong Kong’s surprise semifinalist Wai Chung Wong.

“It feels very good to reach the final, I’ve worked really hard training for this event,” Chifunda said. “When I played in South Africa two years ago I fell short in the semi-finals, so I was very disappointed. I’m thrilled to reach the finals here near Richmond and on American soil. Words can’t even describe this facility, it’s amazing. Playing on this glass court is a treat—a true joy—and to play in front of my home crowd makes it even better.”

Chifunda and Kenny will contest the last World Masters final on the glass court Saturday in front of a full-capacity gallery.

“I’m just looking forward to having a very good, strong match against Liam tomorrow,” Chifunda said. “We played each other once before on the PSA, so I’m looking forward to playing him now that we’re old. I want to thank the guys at my club, Jose and Steven O’Dwyer, and most importantly my wife who has allowed me to train while taking care of our baby. I’m really excited for tomorrow.”

Follow live streaming from six courts and live scores on wmsquash.com/live from 9am ET.