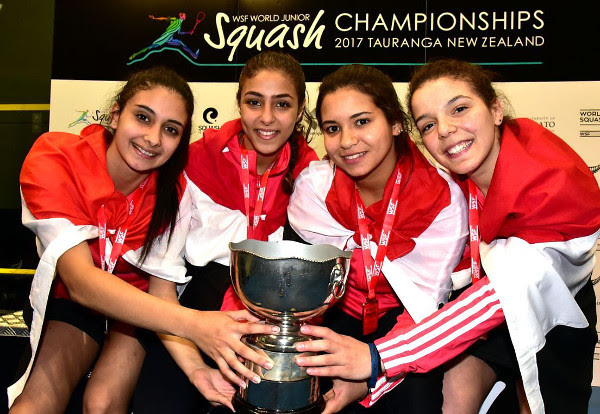 Egypt’s girls celebrate their triumph in New Zealand in 2017

Chinese Taipei are set to make their debut in the 2019 WSF Women’s World Junior Team Squash Championship in Malaysia in August.

Hosted by the Squash Rackets Association of Malaysia (SRAM) for the third time since 1993, the biennial World Squash Federation event will take place at the National Squash Centre in the capital Kuala Lumpur from 5-9 August, following the WSF Men’s and Women’s World Junior Individual Championships from 30 July to 4 August.

Eight-time champions Egypt will defend the title they won for a sixth successive time in 2017 in New Zealand (jubilant 2017 Egypt squad pictured above), where 2019 hosts Malaysia recorded their best-ever finish as runners-up.

The Women’s World Junior Team Championship will be celebrating its 18th edition since the inaugural event in Ireland in 1985 when Australia emerged as the first champions.

“We are thrilled to be host to these young teams at our superb National Centre facilities at Bukit Jalil,” said Maniam Singaraveloo, Director, SRAM. “And obviously we look forward to a strong finish from the home team.”