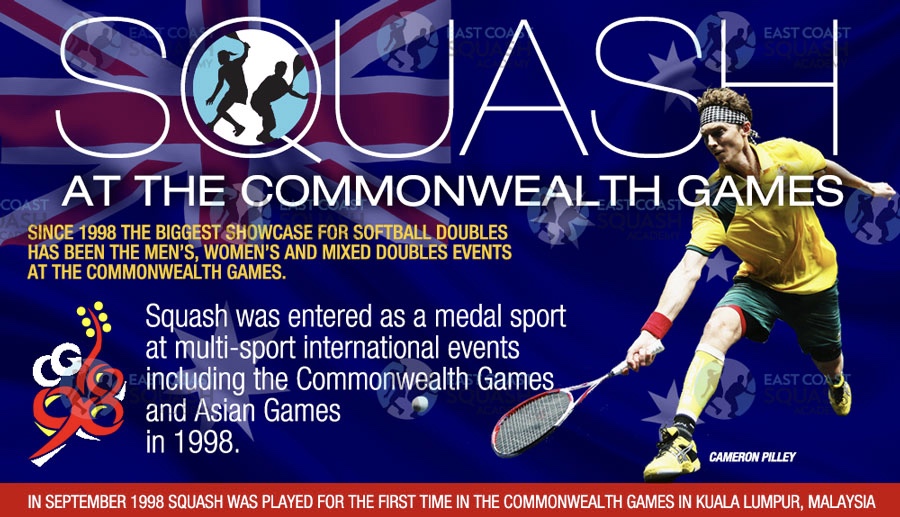 In celebration of the Gold Coast 2018 Commonwealth Games, The East Coast Squash Academy has released a visual treat in the form of an infographic tracing the history, winning performances and other interesting facts which will be of interest to squash players and fans alike.

The Squash At the Commonwealth Games Infographic captures the journey of the sport since it was first played in Kuala Lumpur, Malaysia in 1998 to the most ones held in Glasgow, Scotland in 2014. Presented as exciting bite-size morsels, the content provides an insight to squash as one of the most exciting sports of the Commonwealth Games and acknowledges both Australian as well as the International stars who have left their mark on the game.
The infographic also highlights the growing popularity of squash with 119 players from 28 nations, participating in squash in the 2014 edition of the Games. These included a sole representative from each of the nations of Botswana, British Virgin Islands, Guernsey and Lesotho.
Five of the Commonwealth Games, out of the 20 held so far have been hosted in Australian cities: Sydney (1938) Perth (1962), Brisbane (1982), Melbourne (2006) and now Gold Coast. Australian squash players have dominated in the Commonwealth Games, with nine gold medals, followed by England with eight.
At the Commonwealth Games squash competition, players have the opportunity to win five gold medals in men’s singles, women’s singles, men’s doubles, women’s singles and mixed doubles, respectively.
The singles matches are played on a knockout format, with the top two players reaching the finals after eliminating others in their respective groups. The eliminated players contest consolation games throughout the tournament.
The doubles tournament is played on a round-robin format, where teams with the most points qualifying for the elimination rounds.
The infographic was created for public distribution to give more people an appreciation of squash and to encourage them to support the game by attending the matches at the Commonwealth Games. Please feel free to share it on social media with a backlink to the Academy’s website where more than 100 original references are listed.
To view the Squash At the Commonwealth Games Infographic click here
The East Coast Squash Academy was founded in 2013 when Aaron Frankcomb retired from the Professional Squash Tour, the East Coast Squash Academy set out to create a business model to expand the presence of squash within local communities surrounding squash centres.

The Academy’s first location was at Willoughby Squash Club where Frankcomb was hired as the club’s resident squash pro. The Academy produced some stellar results including: Attracting a handful of junior players with aspirations of going on the professional (PSA) tour. Its junior program had the biggest contingent of players on the NSW Squash Junior ranking list, with players on the NSW junior state teams, Australian junior teams and Australian senior players. 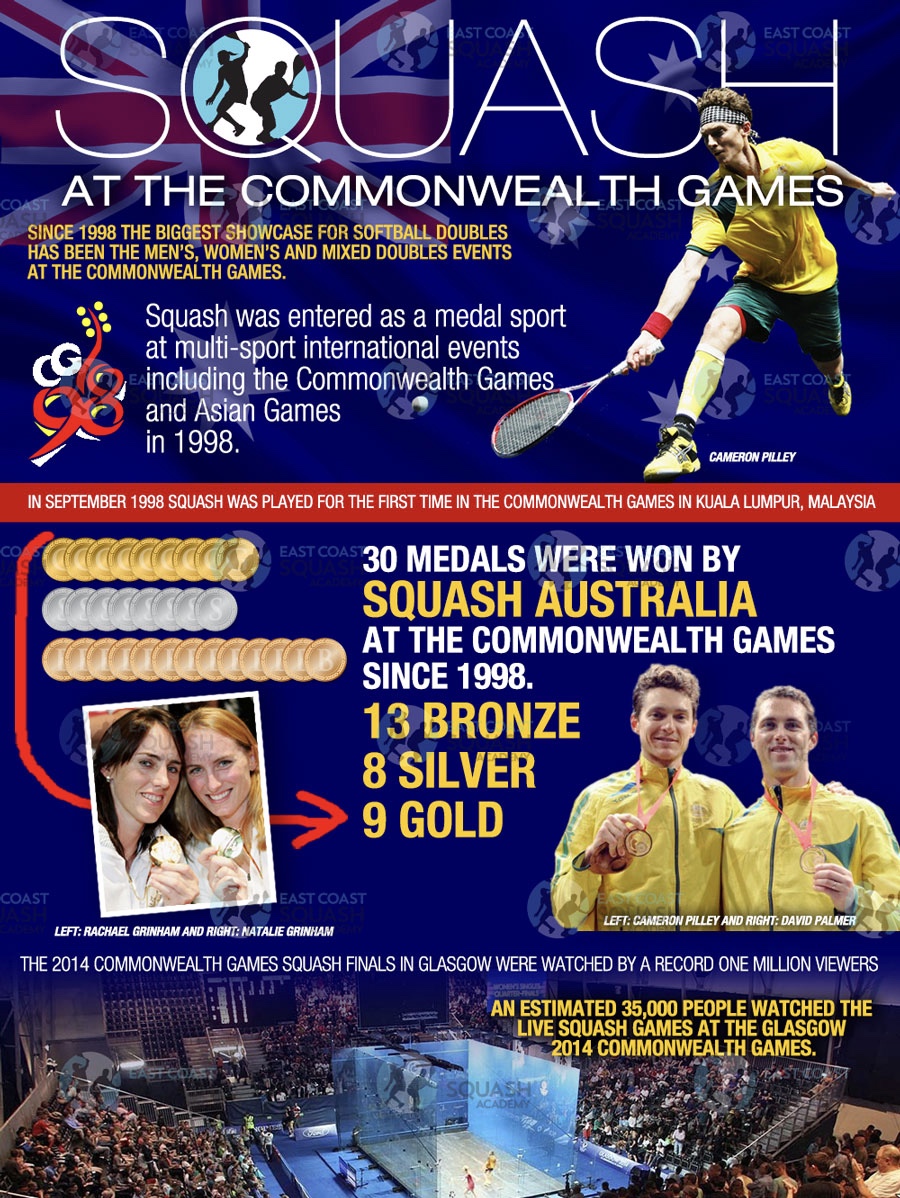 There’s so much more! This is only a part of the brilliant Infographic commissioned by the East Coast Squash Academy to celebrate the Commonwealth Games returning to Australia. Click on the link above to see the whole thing

The Academy has developed NSW and Australian Junior Champions. At its peak, the junior squash program boasted (pun intended!) over 500 children participating in weekly squads and training sessions. Memberships and participation in squads increased by 100% and 300% respectively and tournament registrations reached at an all-time high.

The Academy has been the home base to two full time senior players that reached careers highs of top 240 in the world on the Men’s PSA Tour. Its best female professional reached a top world ranking of 130.

The Bondi Waverley Squash Club was the Academy’s second location, with over 30 hours of coaching services per week were provided to increase court utilization and grow profits by leveraging unused off-peak times.

Aaron Frankcomb:
Aaron Frankcomb was ranked in the top 100 professional squash players for 8 years, and for 4 of those years he was in the top 50, winning 4 PSA titles. He represented Australia at the 2010 Commonwealth Games, was a Junior Champion in all age groups including 2 times in the Under 19 category and holder of scholarships in the Tasmanian and Australian Institutes Of Sport. He now coaches professionally and remains Sydney’s top ranked squash player and is still considered within the top 5 players in Australia.