For players and coaches, the biggest challenge to learning and evolving is a willingness to experiment with new ideas and movements.

Many of our most established training concepts, honed by years of experience on court, are really put to the test by Differential Learning, a system that has been created and developed with many years of ongoing research by Professor Wolfgang Schollhorn at the University Of Manz, Germany.

Change is made even more difficult if we add to this challenge our limiting beliefs and egos. The limiting belief is when we say to ourselves or our coach “I can’t do that” or something similar. The other extreme is when someone believes they know a lot, which in essence is Ego. This belief also limits our ability to see opportunities to change. I am sure we all know lots of people in squash who fit this particular bill.

These observations are directly related to the reactions and resistance I saw in students who attended Wolfgang Schollhorn’s conference about his Differential Learning process and my own preconceived ideas about teaching squash. My initial reaction was to doubt that this approach could really be as differential as Wolfgang states.

Here is a graph that summarises the results of Wolfgang´s research that compares the different training systems including his Differential Learning processes. 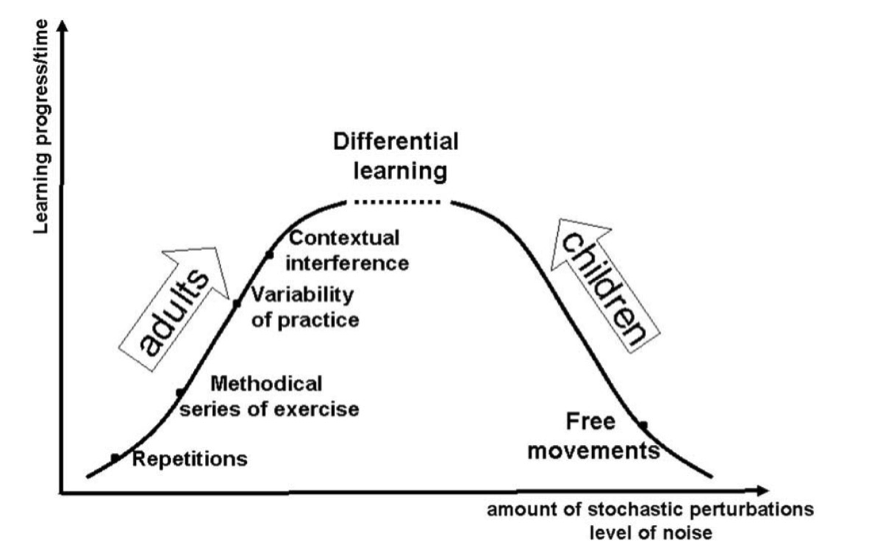 These conclusions come from years of research with comparative tests in different sports where his working group measured different groups training with the different systems for fixed periods of time (eight weeks for example) and then compared the changes and results achieved by the individuals and groups.

As you can see in the graph, repetitions are the least effective form of learning or progressing. This puts in serious doubt the idea that doing repetitions for three or five minutes is good, then if we do eight minutes it’s doubly good. And if we manage to do more it’s even better.

To train with Differential Learning, basically you do the same exercises as in normal training but with fewer repetitions, so you are constantly changing the exercise or activity. You can even change to another unrelated activity for a moment then return to the training exercise.

Based on the power law of neural adaptation, Wolfgang recommends not more than three repetitions of each action or exercise – I’m not sure that only three repetitions is appropriate for squash but compared to the usual number of repetitions involved in our normal training we have a huge margin for trying things out.

With my own experimenting, I have seen that the optimum is much closer to Wolfgang’s recommendation of three repetitions than it is to what is normal in squash. It is also difficult to compare, for example, the boast and drive exercise with practising drop shots or solo training. This where each coach or player has to start their own research to discover what brings change.

Here is a brief video of from a conference last year

Differential Learning works with what he calls “Noise”.

What is Noise? Technically, noise is an unwanted disturbance in a signal. Imagine a monitor measuring brain activity during a training session. Wolfgang has seen that when there is a change of activity or exercise, the monitor shows agitated brain activity and this is what he is calling noise as it looks like a graph that measures sound.

When the player has settled into a training routine, the monitor shows a more gentle, curving line. He has shown that change and improvement appears when there is “noise” so by changing much more frequently the exercises, you are frequently creating noise so, in theory, have more chance of evolving.

This is not a magic solution and changing the exercise in itself is not the secret. What happens when we start a new exercise?. Our body and mind have to organise themselves for the new activity.

As we focus on the different requirements and objectives of the new activity we are brought consciously or sub consciously into the present instead of comparing with the previous (past) or model (future) exercise. For this reason, there is a lot more “noise” when we start the new exercise.

Once you are into the rhythm of the exercise, the monitor of the brain activity shows a more gentle, regular curve, indicating that your body has organised itself for the activity and is comfortable. In this phase the question is, are we now reinforcing our old habits or are we building improvements?

My reality was that once I was into the rhythm of boast and drive, for example, I could start thinking about what would be the next exercise, what I was going to have for lunch, or be aware of people behind the court. I now question whether I was really training in the “present” once I had gone past that beginning phase.

Training with Ross Norman, in my previous life as a squash player, I had first-hand experience of working in the present. I was, of course, on the receiving end most of the time.

Balls hit without objective or intention did not exist. Ross had an exceptional ability to maintain his focus on all the details of what he was doing in every moment.

Not surprisingly, being on court last year with Borja Golan I saw comparable levels of intensity and focus. As the vast majority of players use a lot of repetition in their training, and only a very few attain this level, there must be more than simple repetition required to build this ability. For this reason we all should be thinking outside the box, experimenting and looking for change

The Gevolution process comes from experimenting with and adding different factors that in the end are helping to create more “noise” thus helping the player evolve.

For example, in the last two articles I talked about different aspects of watching the ball. Do you think becoming more conscious of how we watch the ball creates more “Noise?” Another concept we can add to the mix that helps to create more “Noise” are the primary movements, and I will share more about this in forthcoming articles.

In the next article, I’ll talk about more about differential learning and some surprising finds about the retention of new skills Wolfgang has had in his comparative tests.

Footnote: Before sending this text to Alan for editing and publishing, I sent it to Wolfgang and he returned it with a little, very much appreciated, fine tuning.

I first met Wolfgang two years ago when he was on a fortnight’s visit to the Sports University (INEF) in Barcelona. He had afternoons free and offered to meet with coaches of any sport. After talking with him for a couple of hours we arranged to meet again the following week. The next day he did a session with FC Barcelona and they immediately signed him up for all his free time the following week, so I missed out …