Daryl Selby: ‘I will wear eye guards every time I go on court from now on’

Alan Thatcher February 18, 2020 1 Comment on Daryl Selby: ‘I will wear eye guards every time I go on court from now on’ 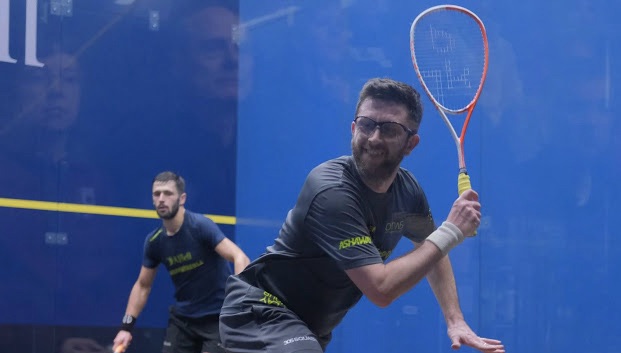 ‘All sports are evolving for safety reasons, and one day eyeguards will be just like wearing seatbelts’
By ALAN THATCHER – Squash Mad Editor

England captain Daryl Selby has pledged to wear eye protection at all times from now on after suffering a bruised retina during the National Championships in Nottingham a few days ago.

Selby, at 37 one of the most experienced professionals on the PSA World Tour, will sport some form of eye guard in his next tournament, the Troilus Cup in Canada from February 21-25.

He will then wear them on court in his favourite “home” tournament, the St. James’s Place Canary Wharf Classic, from March 8-13, when he faces Joel Makin in a tough first round tie.

As well as pledging to wear eye protection at all times from now on, Selby also revealed that he has asked his wife Lucie to do the same when she plays in local league matches in Essex.

Selby counts himself lucky not to have been badly injured when a stray shot off the frame of opponent Ollie Pett’s racket caught him a glancing blow in the eye at Nottingham Squash Club on Thursday.

Following our Squash Mad article on his injury opening up a debate about eye protection, Daryl took to Instagram to post a message to his followers.

First of all, my spies at Nottingham got it wrong about Daryl sending a “mis-hit” shot down the middle of the court that led to Ollie playing the ball behind his own back.

Daryl explained: “I was in the front left corner and deliberately hit the ball down the middle, as a lot of pros do, to keep the ball off his forehand volley.

“He played it behind his back, as I would have done, but unfortunately, he caught it a little bit late. The ball struck the edge of the frame and, as I turned to watch what was happening behind me, I saw it coming towards me.

“I turned and looked at him and it was a bit like wearing 3D glasses at a cinema and stuff comes towards you … and obviously I saw a ball coming towards my eye.

“I just managed to lean back and turn my head enough to one side which meant that the ball hit the eye socket. That stopped it from going directly into the eye itself, which could have caused a lot of damage.

“I saw a specialist and she told me there was no damage to the retina, which was obviously a big relief. On the flip side, she said I was fairly lucky because of where the ball hit me.

“Lucky or not, it made me think very deeply about the whole subject of eye wear and eye protection.”

Selby felt bad about being awarded a walkover against Pett and returned to court the next day against George Parker sporting a pair of goggles.

Parker won through in straight games and afterwards Selby refused to use his eye injury as an excuse. He did, however, admit that he felt the word “goggles” has a negative connotation.

He added: “When people say ‘goggles’, straight away the word is a massive turn-off. It sounds awful.

“I prefer to use the phrase ‘eyewear’ as they do in the US. They have it right by making all amateurs wear protective eyewear … and why wouldn’t you?

“In the US they think we are idiots for not wearing it, especially amateurs. It’s mandatory over there and because everybody does it nobody feels uncomfortable. When you pack your bag ready for a game you take your racket, shoes, ball and eyewear. Every time. But in the UK and Europe I think it’s time we discussed the topic in a serious fashion.”

Selby’s viewpoint has been influenced not only by his own experiences, but also by talking to leading coaches Nick Matthew and Phil Rushworth, plus a number of concerned players at Nottingham, who shared gruesome stories of injuries incurred by themselves or acquaintances.

According to Selby, both Matthew and Rushworth were hit with a ball in the eye as a result of innocuous incidents that occurred while coaching, Rushworth’s leading to a detached retina. A similar thing happened to his father (Paul) when a junior threw a ball back to him when he wasn’t looking, and it hit him in the eye and he suffered a torn retina.

He also heard horror stories about a number of self-inflicted injuries including that of a racketball player whose powerful shot rebounded off the front wall at close range straight into his eye and the injury resulted in a total loss of sight In that eye.

Selby added: “After my injury a lot of people spoke to me at the Nationals and the conversations I was having made me think about how we have all got used to wearing a seatbelt when we drive a car.

“You ride a bike and think you never need a safety helmet until that one time you have an accident. Then you change your whole thought process, especially as a parent.

“A big discussion is needed here in Europe and the UK about eye safety on court.

“It is looked upon as uncool, and certainly many juniors think it’s uncool. Some people are obviously impatient and don’t like the fact that it might take time to get used to wearing them, and it’s irritating when you have to deal with sweat and the goggles steaming up, but you do get used to it.

“At the Commonwealth Games doubles, every player has to wear eye protection and you get used to it in practice well before the event, even if it might be a bit annoying and uncomfortable to begin with.

“But by the time you get to the tournament we are all used to it. Everyone wore them at the event and nobody complained.

“At club level, there must be something seriously wrong if people don’t wear eye protection when they play doubles.”

Closer to home, Selby added: “My wife plays local ladies league and I suggested to her six months to a year ago to wear glasses after doing a podcast on the subject with Cam Pilley. I remember saying that all amateur players should wear protective glasses of some kind on court.

“I am well aware that the next question, of course, is should all pros wear glasses?

“It’s a tricky one because I have been playing squash for 33 years and can honestly say I have never been hit on the body above waist height in all that time.

“Then the one time I do get hit it is in the eye so that has made me think ‘Do I want to take that risk every time I go on court?’

“Do I want to risk my eyesight as the father of young children? If I was suddenly blinded in one eye what would happen? How would that impact on my life? Why would I not just put a pair of glasses on?

“Why should it take one ball hitting me partly in the eye for that to change?

“But you experience things in your life and that makes you think, so from now on I think I will use eye wear every time I go on court.

“I have heard so many stories in the last few days of people being hit in the eye. Everyone seems to have a story about it.

“There were a lot of Masters players competing in the age groups at the Nationals and I must have spoken to at least 15 people in Nottingham and at least seven or eight spoke about being hit in the eye. People were also saying the same things on Twitter.

“Sure, I saw a few comments about people claiming how rarely it happens, but in the amateur game I have walked past so many squash courts and seen so many people hit balls inches past each others’ heads.

“I read a good article on Squash Mad the day after the injury and I am pleased that this is helping to spark some debate on this serious subject. An inch the other way and it could have been serious for me. And I don’t want that to happen to anyone else.

“At junior level we protect all our players but we should also try to protect all amateur players. It needs to be discussed.

“Many of those amateur players are very stubborn and don’t want to hear what I am saying, but I am campaigning for every club in the UK to take it seriously.”

Selby revealed that, little more than an hour before our telephone conversation, he had seen a child hit in the face by a ball during a junior training session.

He said: “I was watching the kids train and a small boy was hit in the goggles today. Luckily, he was protected by his goggles but he shook it off and within 10 seconds he was OK to carry on playing. I looked at that incident and could see that’s why the people in the USA think we are crazy for not making it mandatory.”

Looking ahead to his next two PSA tournaments in Toronto and Canary Wharf, Selby confirmed he would be using eye wear at each event.

He was also keen to discuss changes we have seen in other sports in relation to safeguarding from injuries and added: “In football we are having a debate about heading the ball because of so many high-profile cases of dementia being blamed on heading.

“In rugby they have changed the rules around tackling to stop head and neck injuries, and in cricket they have adapted the helmet design to protect the back of the head after one unfortunate fatality.

“That’s how sports evolve and if squash was to introduce compulsory eye protection, nobody will be talking about it in 10 years’ time.

“It will just be an automatic response, like wearing a seatbelt in the car or wearing a helmet when you ride a bike.

“Like I say, I hope this provides some background about what happened to me and sparks some debate on the subject.”

It will certainly spark some debate in the Selby household after his wife Lucie ignored his advice to wear eye protection. Daryl added: “I am hoping she will now!”