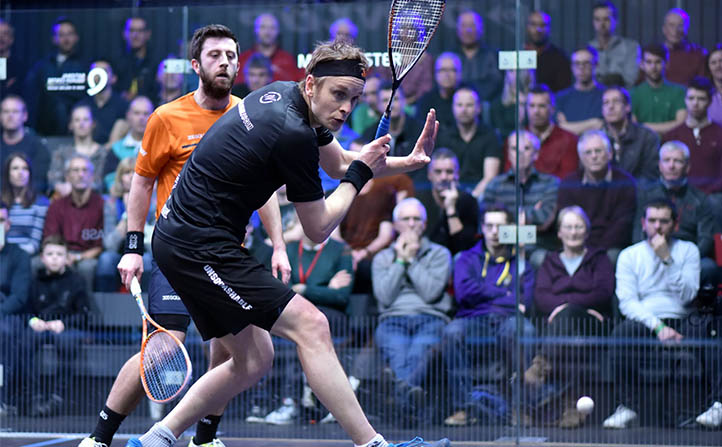 The two long-serving England players, who teamed up in the 2014 Commonwealth Games doubles, last met in the National Championships in Manchester, with Willstrop winning their quarter-final battle in straight games. They will be joined in the main draw at Wimbledon by Declan James, who will be accompanying the two seasoned internationals on the plane to Gold Coast for next month’s 2018 Commonwealth Games.

Other Wimbledon entrants preparing for the Games include Greg Lobban of Scotland and Joel Makin of Wales. Top seed Selby faces Omar Abdel Meguid of Egypt in the first round and, if successful, is scheduled to meet Lobban in the quarter-finals in a re-run of their recent Edinburgh Open final which was won by the Scotsman. First, Lobban must beat Raphael Kandra of Germany. Welsh No.1 Makin meets No.3 seed Zahed Mohamed of Egypt.

Another fascinating rematch involves Ben Coleman and France’s former world No.6 Mathieu Castagnet. Coleman beat Castagnet in a best-of-three qualifying battle in the recent Canary Wharf Classic, a tournament won by the Frenchman in 2016.

Former World No.1 Willstrop, winner of the first PSA event at TWC, meets a qualifier in the first round.

This is the third PSA event run at The Wimbledon Club. The prize money has been increased every year and this year the prize fund has risen to a healthy $35,000 thanks to increased sponsorship.

Main sponsors are Mercer Taylor,  a residential sales and lettings company, with further support from Pelham Smithers Associates and Fabricari.

Secondary Schools are St Cecelia’s in Southfields and Overton Grange School in Sutton with 15 children per school, and the aim here is to positively affect GCSE outcomes.

Founded in 2015, Squash Squared is the UK’s first Urban Squash Programme. The project is funded by the Wimbledon Foundation (the charitable arm of the All England Lawn Tennis Club) and the England Squash  Foundation. New sites are due to be added this year.