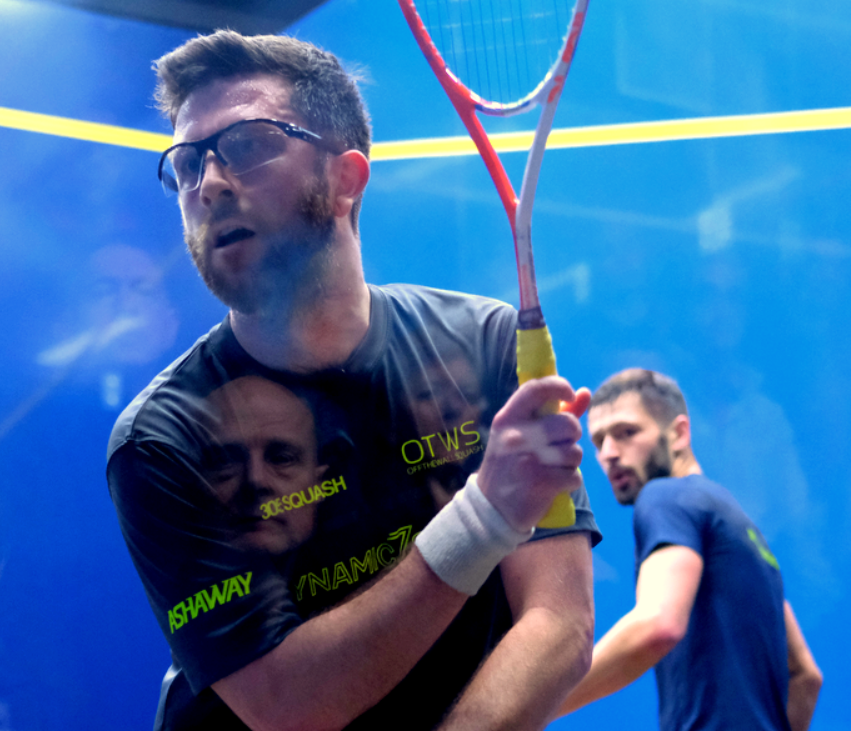 Daryl Selby wears goggles the day after his eye injury

The subject of eye protection in squash hit the headlines again after England captain Daryl Selby suffered a freak eye injury in his National Championships match against Ollie Pett.

With their first round match just a few minutes old, Selby deliberately hit a backhand crosscourt down the middle from the front left corner to avoid giving his opponent an easy volley and Pett, reacting quickly to an unusual situation, attempted to play a shot behind his back.

The ball spun off the frame of his racket and struck Selby in the right eye. He was taken to hospital in Nottingham and an examination showed internal bruising to the eye but no sign of a detached retina.

Selby was awarded a walkover because Pett’s unfortunate shot was deemed to have caused the injury that led to the match being prematurely ended.

The next day, Selby sported a pair of goggles for his quarter-final tie against George Parker. Taking nothing away from Parker, but Selby’s performance was clearly a subdued one, according to some knowledgeable players close to the England camp. Despite those opinions, Daryl refused to use his injury as an excuse and stressed to the audience that George had won on merit.

Selby, at 37, must have completed thousands of hours on court, playing and training, without worrying about getting hit in the eye with a ball.

At the highest level, no doubt you trust your own ability, and that of your opponents, to strike the ball safely and accurately.

At the very apex of professional sport we frequently hear the mantra that success is down to fine margins. So, if wearing goggles might diminish your vision and concentration by a small fraction of a percentage, then athletic performance outcomes are likely to be given priority over health concerns. If you are frequently distracted by your goggles misting up, then many players are likely to leave them at the bottom of their bags, unloved and unwanted.

However, squash has different rules in place for different territories and different tournaments.

If you play recreational or college squash in America and Canada, you will not be allowed on court without eye protection. 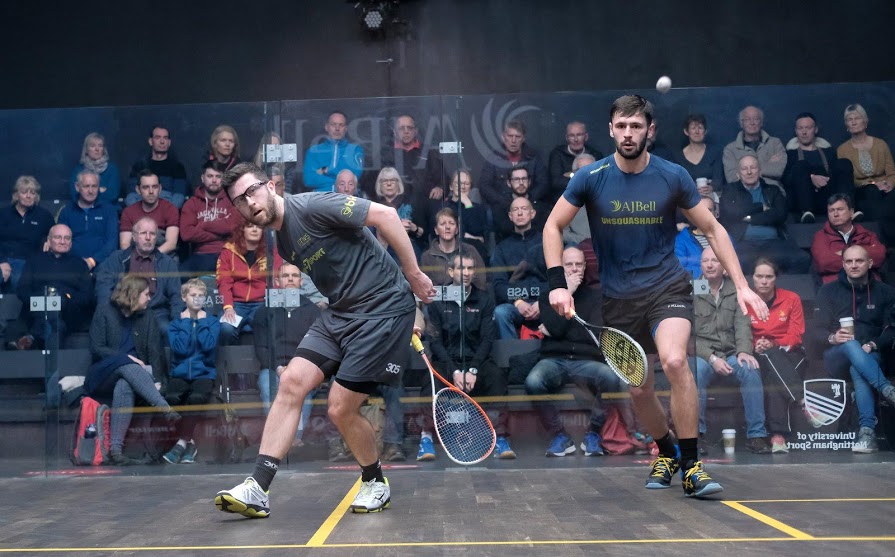 While wearing goggles against George Parker, Daryl Selby plays the ball behind his back. A similar shot by his opponent the previous day led to Selby heading to hospital with an eye injury

Play doubles in the Commonwealth Games and the same rules apply. We also expect our juniors the world over to wear eye protection at all times but most countries do not enforce such strict policies for adult players.

I remember Daryl Selby being involved in an incident during an emotionally-charged 2014 Commonwealth Games match in Glasgow, when he and partner James Willstrop played home heroes Alan Clyne and Harry Leitch.

Clyne was trapped behind Selby in the back left corner and the Englishman wound up a ferocious backhand drive. He had no idea that, as he struck the ball, Clyne would wriggle round him and take the full, immense force of his racket follow-through to his head.

Fortunately, Clyne was wearing an I-Mask that absorbed much of the impact. Selby, it must be pointed out, did nothing wrong. Clyne, in attempting to escape from a position where he was trapped behind his opponent, put himself in the danger zone. He was obviously afraid of Selby going short, but did not bargain for the big flat kill.

I have often wondered what kind of injury Clyne would have sustained had he not been wearing such a substantial piece of eye protection.

I speak from a position of painful experience, having been struck in the eye with a racket when I very first started playing the game of squash.

Stupidly, I was wearing spectacles with glass lenses. I remember the incident, some 44 years ago, with absolute clarity. I was on match ball and placed a decent backhand drop close to the left wall. My opponent, a left-hander, took a wild, desperate swing, missed the ball and his follow-through ended with his racket smashing my specs and driving shards of broken glass into my left eye.

My girlfriend, now my wife (40 years a squash widow this July) was watching from the gallery. Luckily, she had her car outside and drove me to Eastbourne Hospital. Sadly, her rusty old Morris Minor was on its last legs and the wobbly suspension meant a rather uncomfortable, bumpy drive to the hospital.

A doctor carefully fished several pieces of glass from my eye and sent me away looking like a pirate, with a patch over my left eye.

For the next three mornings, tiny pieces of glass found their way to the surface of my eye. A trip to the optician for a thorough check-up revealed no more glass deposits in the eye. It also led me to wearing contact lenses.

Since then, like most players, I have vacillated between wanting to protect my eyesight and the frustration of stopping matches to wipe sweat off my glasses or goggles.

As a coach, I felt it was helpful to reinforce the message about eye protection by wearing goggles while I took junior groups. After all, it’s rather contradictory to insist on your pupils wearing goggles and not wear them yourself. 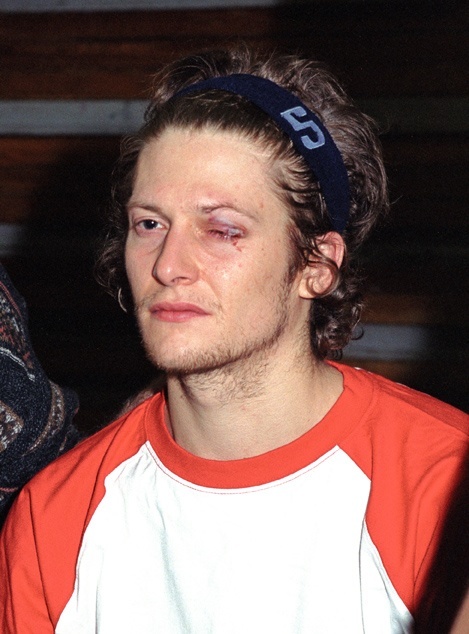 As a lover of doubles, I often, but not always, wear goggles while playing. That decision is often more to do with how much I trust my opponents than anything else.

At club level, I have seen some horrific situations during doubles matches where players with big, dangerous swings see no reason to adapt their playing style in the interests of safety.

I clearly recall playing doubles with my then teenage son many years ago when he hit a crosscourt that beat his opponent, only for this guy to turn on the ball and smack his shot straight up the middle of the court, right into my son’s face. Yes, he was wearing goggles, and the ball struck him painfully on the cheek.

The moron who hit the ball failed to apologise and tried to blame my son for his powerful crosscourt. Obviously, stopping play and asking for a let did not occur to this particular individual. Words were exchanged and I instantly decided not to go on court with this idiot ever again.

Of course, in much of the world we make life difficult for ourselves by playing doubles on a singles court, making collisions and injuries far more likely.

Americans, of course, have wonderful, purpose-built, hardball doubles courts. Try to squash a hardball between your fingers and you will instantly understand why eye protection is mandatory. A hardball strike to any part of the body will cause a bruise that will change colours as the seasons pass.

Sadly, those doubles courts were not replicated on this side of the Atlantic (apart from one in Edinburgh, the only American-sized court in the whole of Europe).

Following the 2014 Commonwealth Games, when a new court dimension was finally agreed upon for doubles, the technology has been available to convert a singles court for doubles play by pressing a button.

However, there must be some inherent impatience built into squash players because nearly every one of those electrical installations has been wrecked by players trying to force the machinery to go faster than it’s programmed to by pushing and shoving the wall. Now, court builders simply recommend a manual solution to moving the side walls for doubles play.

So, stupidity (or lack of patience) is clearly an issue in the game. Too stupid to wear proper goggles, too stupid to ask for a let, or too impatient to wait for a court wall to move.

Lack of care and coaching for newcomers to the game is another important subject. Far too many clubs happily take membership fees from new adult members without ever trying to teach them the rules, the etiquette of the game, or offer basic tips about health and safety while on court.

Most injuries occur when beginners flail their rackets around uncontrollably, hit the ball up the middle of the court, and have no idea how to  keep out of harm’s way.

We know that the newbies are the most likely people to get injured playing squash, and we happily smirk and wince from the gallery as we see them risking life and limb down below.

But, whatever your standard, there is no accounting for a freak mishit shot spinning off a frame, as Daryl Selby found out this week, and the closer you are to your opponent, the more likelihood there is of you being struck by the ball.

I am sure most players will have their own experiences, opinions or horror stories concerning eye protection. Feel free to share them below.