Date in Dubai is a dream come true for Miguel Rodriguez

Alan Thatcher May 30, 2018 No Comments on Date in Dubai is a dream come true for Miguel Rodriguez 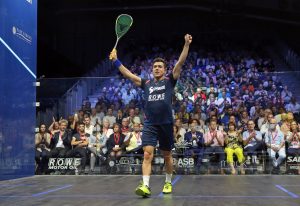 The ‘Colombian Cannonball’ is currently in the form of his life after claiming his first ever World Series title at the prestigious Allam British Open when he defeated World No.1 Mohamed ElShorbagy to make history by becoming the first winner from South America.

He also added the Sporta Guatemala XI Torneo Internacional PSA title to his haul of titles last week after defeating Peru’s Diego Elias in the final.

Rodriguez will be making his second appearance in Dubai after first reaching the tournament when it was staged at the foot of the Burj Khalifa two years ago and he spoke of his pride at playing at the iconic event.

“It’s terrific for me, when I was a kid I always wanted to play at the tournament,” said the 32-year-old from Bogota.

“I remember Thierry Lincou and Amr Shabana playing that tournament and when I was a kid the dream was to be top ten in the world and play the World Series Finals.

“I missed last year and at the beginning of the year I set a goal that I was able and capable to make the World Series Finals and I’m here doing it.

“I’m so happy and so proud, it was not easy because I had Nick Matthew and Omar Mosaad in front of me and I had to wait for the results as well, but I made it and it’s like the cherry on the cake.”

The World Series Finals brings together the top eight players on the Men’s and Women’s PSA World Series Standings, with qualifying points on offer at all World Series tournaments throughout the 2017/18 season.

The tournament also features a best of three format throughout the group stages before reverting to the traditional best of five for the semi-finals and final and Rodriguez is looking forward to the change.

“I like it, I think a separate format for this tournament is good,” said Rodriguez. “No doubt we need best of five in the World Series tournaments. Squash is all about strength and conditioning and it’s so tough. This is why we can’t switch to best of three because otherwise it will be a very short game and sometimes when you are 2-0 down you can still win.

“But, I think for Dubai it’s a great opportunity and a great format to play best of three – it’s the last tournament of the season, you don’t get points, but I think it’s a reward for the top eight players that they reach that tournament and I’m very happy to be in Dubai again.”

Rodriguez has been drawn in Group A and will face Egypt’s reigning World Champion Mohamed ElShorbagy on day one at 20:45. All times are local GMT +4.

Every fixture will be shown live on SQUASHTV (Rest of World) and Eurosport Player (Europe only), while the semi-finals and final will be broadcast on live mainstream channels across the globe, including BT sport, beIN Sports, Fox Sports Australia and Astro.

Tickets for the World Series Finals can be purchased here: