Mark Kelly February 13, 2017 No Comments on Derek Ryan: Return of an Irish legend 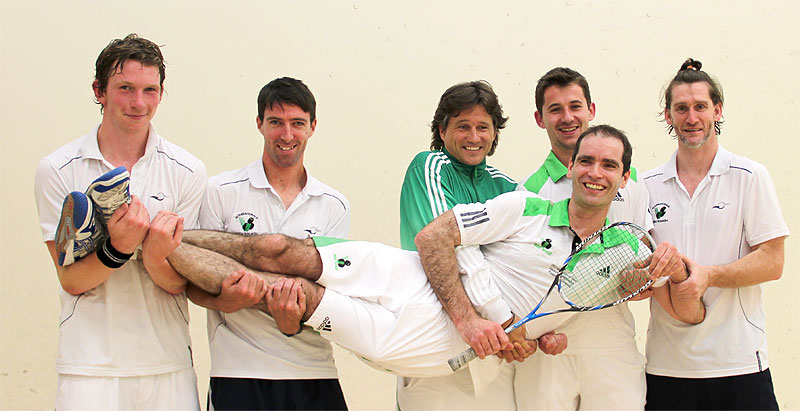 Irish squash legend Derek Ryan, a former top 10 player almost two decades ago, is back at the pinnacle of the game, having secured a contract as Lead Physiotherapist and Medical Coordinator, providing on-site treatment and advice for PSA World Tour members. Here he talks to Mark Kelly, founder of the inspirational Irish Squash and Education Association.

The crowning of Ireland’s Dennis Gilveskiy as the under-13 British Open champion in January was as exciting for me as any sporting news of 2017. Being the first Irish junior in history to win the world’s largest and most prestigious junior squash tournament is a phenomenal accomplishment.

Immersed as I am in youth enrichment activities, largely through the medium of squash (www.squashlink.org), this achievement felt much closer to home than anything else I would care to compare it with. Already a huge inspiration for many involved with the world of squash here in Ireland, Gilveskiy will undoubtedly continue to inspire as he develops as a player and ambassador for the sport.

Given the significance of this historic achievement for squash in Ireland, together with the election last November of Gar Holohan, President of Irish Squash to the leadership team of the World Squash Federation, the time for a long overdue interview with the Irish squash legend, Derek Ryan, seemed more appropriate than ever.

Did I read somewhere on social media you introduced the Gilveskiy family to the game of squash?

It must be eight or nine years ago I started coaching Nikita (older brother to Denis). He went on to represent Ireland and win a scholarship to Cornell University in New York. Denis would be sitting outside the court with Lena watching lessons and I was always pestering him to get on court but he was stubborn and would just sit on his hands watching his brother play instead! A year later, after a lot of persuading, he finally ventured onto the court. He was always a good athlete (indeed, this young leader, a reliable source tells me, has recently broken the national record for 600 metres!) and you could see he had a talent for the game from the very start.

Are you hopeful of an Irish squash world champion in your lifetime?

You have to be hopeful. Anything is possible if the right player has the right people around them. Madeline Perry gave it a good shot, rising to number 3 in the world and that was behind Nicol David who is without doubt the most successful women’s player of all time. 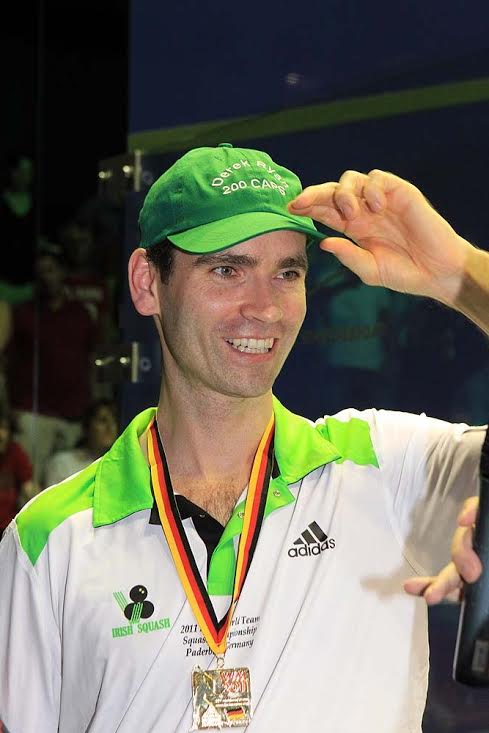 What do you consider to be the single greatest challenge to developing the sport of squash in Ireland?

Getting the sport into the Olympics. If it were in then there would be potential for more funding and an increase of awareness of the sport.

We know how valuable the squash court is as a forum for learning skills such as discipline, confidence and leadership. Like all sports, the game can teach core principles such as tolerance, cooperation and respect. Do you agree that a central pillar of our sport should be one of developing stronger ties with schools and the educational establishment as a whole?

No question. Getting schools involved would increase the pool of players available and therefore have a knock-on effect for the growth of the sport. The difficulty is competing with other sports that are embedded into schools exercise/sporting programme.

Given the critical need for socio-emotional intelligence among young people in Ireland today, do you agree in the great potential of squash as a force for good in society, particularly in respect of underserved children – those most in need of afterschool enrichment and support?

Absolutely. Squash is a great sport to connect people with each other. It doesn’t have to be too competitive either especially when drills can be set up just to practice. Even if some struggle technically at the beginning, games can be set up where there’s a lot of movement to ensure they’ll have the opportunity to enjoy a decent workout and most importantly have some fun. That’s one great thing about squash: you run after a ball and compete with someone your own standard and it can be the best workout and fun you can have.

Do you agree that lack of participation in sports by young people in Ireland is in some way due to insufficiency of choice?

I wouldn’t agree! I think there’s plenty of choice and opportunities for getting involved in sport in Ireland. The GAA (Gaelic Athletic Association) is evidence of this. There is a huge infrastructure in place with so many GAA clubs providing programmes for coaching and playing Gaelic football, hurling (an Irish stick and ball team sport) and Camogie (a variation of hurling played by girls and women) throughout Ireland.

There are strong similarities between handball (one of five GAA games) and squash. Do you envisage Irish Squash collaborating with the GAA in order to develop our sport’s participatory framework, at any stage in the future?

I think there are some links already in place with a few GAA clubs around the country – those that house squash as well as handball courts. The GAA historically focuses purely on their core sports but it would be worth helping to maintain the courts that still exist whilst offering some coaching and open nights with local coaches.

Approximate figures suggest squash is played in 175 countries by 20 million people on 50,000 courts. I am asking these questions on finals day at the Tournament of Champions in Grand Central Station, New York City, at which you are present in your capacity as the recently appointed PSA Lead Physiotherapist and Medical Coordinator. Sport and tourism are formidable bedfellows. Are you ambitious for squash in this regard?

Looking at the PSA calendar there are some amazing venues and cities that are already holding events. We’re fortunate that a squash court can be put up in venues near the pyramids, Grand Central Station and on seafront locations. Tourism and sport are used worldwide in other sports and squash is doing the same.

If a glass court came to Ireland where would you locate it?

What does your recent appointment as the PSA’s Lead Physiotherapist and Medical Coordinator mean to you?

It’s great to reconnect with the sport at this level having been away from it for so long. I love the sport, both watching and playing, so in many ways it’s an ideal job.

Having worked with several elite athletes in a range of sporting disciplines, what advice would you give the young, ambitious sports people just starting out on their journey?

Surround yourself with positive people who have experience in their chosen sport as well as a good strength and conditioning trainer and medical backup.

Who do you admire the most on today’s PSA tour? Why?

Nick Matthew. He is 36 and still competing with the best in the world. He’s had to adapt his game in order to stay competitive and has shown huge discipline and dedication to get to the top.

Who are your sporting heroes?

What was the most memorable match of your PSA career?

Playing Peter Nicol in the final of the Kuwait Open (1998).

What was the toughest match of your professional career?

Hong Kong Open against Nick Taylor. I cramped up in my quad and thumb in the fifth game. It was comical to watch (apparently) but brutal to play!

What has been the most memorable tournament of your career?

It has to be the Tournament of Champions in Grand Central Station. Anyone who has walked through the station will know why. An iconic venue, and open to the public.

Did you ever fall out of love with squash?

Many times! Playing sport professionally is tough and a lonely journey at times. However, it only takes one good result to put a smile back on your face and embrace the sport again.

Do you have a motto that you live your life by?

Be the best you can be.

Rod Gilmour and Alan Thatcher (in their fascinating 555: The untold story of Jahangir Khan) liken squash to boxing and golf. One of your sporting heroes, Jonah Barrington, coined the expression of squash as a game of ‘boxing with rackets’ which Gilmour and Thatcher consider to be distinguished by ‘bruises on the inside’. What are your thoughts?

I never looked at it that way but I can understand where they are coming from. It can be a brutal sport physically and there are times when you have to reach into the reserves that you thought were depleted to turn a losing position into a winning one.

Which of the following analogies do you relate to most? The squash court as a boxing ring, class room, dance floor, fish tank or gladiatorial pit?

Derek, thank you so much for a fascinating interview. Good luck in the new job from the Squash Mad team and looking forward to seeing you at Canary Wharf if you are coming over.

Founder of the Irish Squash and Education Association www.squashlink.org