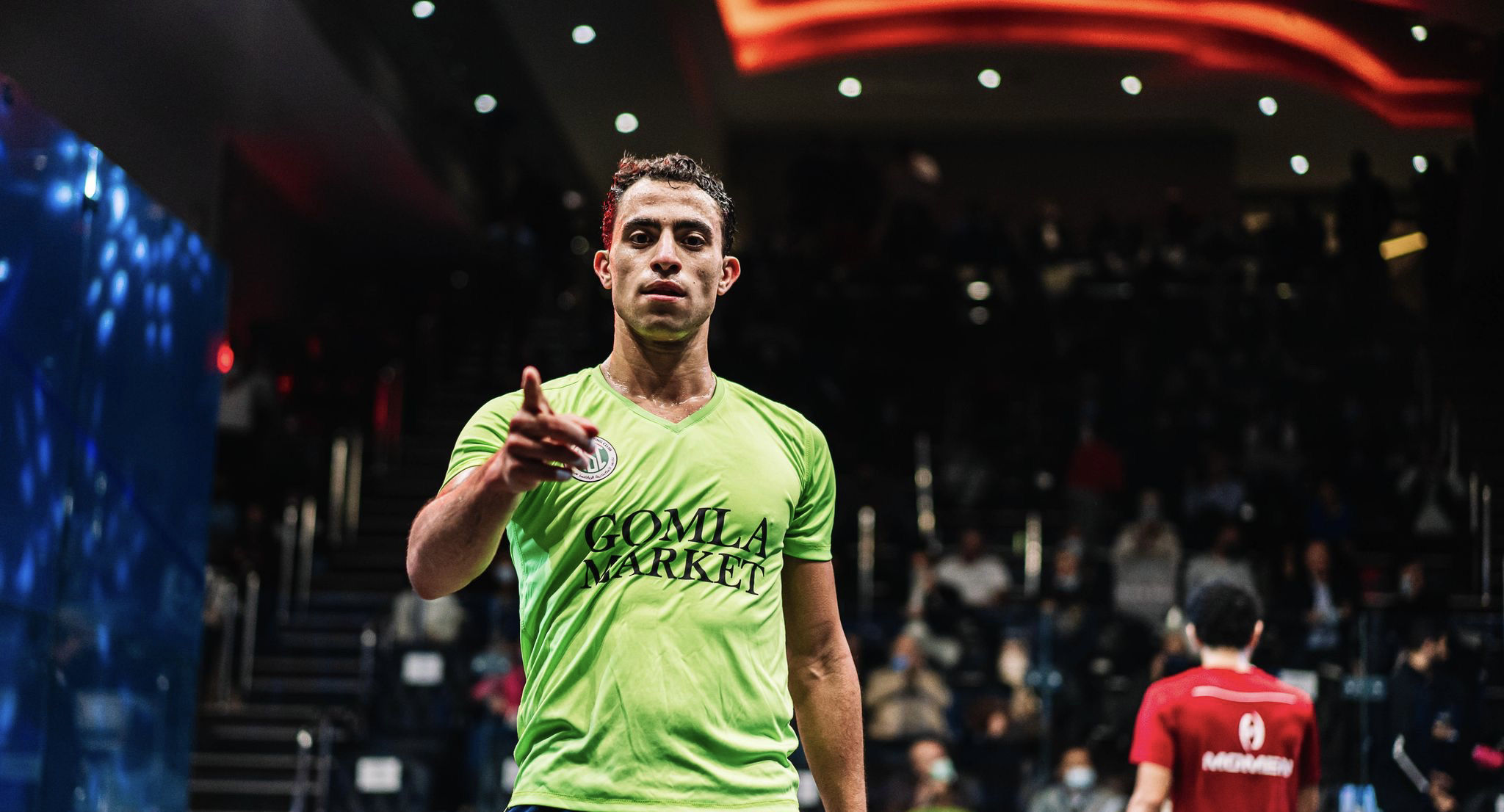 Fares Dessouky achieved a landmark first victory over world champion Tarek Momen to book his place in the final of the CIB Black Ball Open.

Egypt’s World No.11 Dessouky is not known for his consistency – largely due to a number of unfortunate injuries – but here at the spectacular Black Ball Club he has strung together a succession of intelligent, professional and polished performances to reach the final of this PSA World Tour Gold tournament, where he will meet the world No.1 Ali Farag.

Farag is keen to achieve back to back victories in major tournaments, and he went through in straight games against world No.14 Mostafa Asal, who was suffering from a blistered hand after recording phenomenal victories over Paul Coll and Miguel Rodriguez.

The 26-year-old had lost all three of their previous encounters but cut a determined figure on court today as he displayed his formidable shot-making ability during a stop-start match, littered with decisions, to hold his nerve and fight back from a fourth game defat in which he managed just a single point.

“There is a lot of ups and downs,” said Dessouky afterwards. “Especially if you are playing well from the first [match] of the tournament. He’s playing incredibly, he’s very fast on court, so I had to really focus on every point. It’s hard to keep my focus until the end of the match.

“I’m very happy to make it to the final. This is my biggest final since I started playing PSA, so I’m really happy to be back and competing again, especially here in Egypt. I have to recover and make sure my body is in good shape. Tomorrow will be a tough match against Ali. He’s the World No.1 and is in good form so I will try to dig really deep to grab the win.”

Farag will line up in the Black Ball Open final for the second time in his career, after finishing runner-up to Karim Abdel Gawad in 2018, following a polished 11-8, 11-5, 11-5 victory over rising star Asal.

Asal had been the talk of the tournament following his victories over World No.4 Coll and World No.10 Rodriguez, coupled with his extravagant celebrations. But despite some impressive winners from the 19-year-old in the opening game, the victory never really looked in doubt for Farag as he produced an effective performance to advance to his third successive final.

“It felt very good,” said Farag. “I had a game plan in mind, but you never know if you’re going to be able to execute it in three or four games and even when he came out with outright winners, I still knew I was going with the right game plan. It’s this balance of being aggressive without getting too explosive because that’s how he likes to play.

“When you’re at No.1, finals is what you try to achieve consistently. I’ve never won three titles back-to-back. I’ve won at the Pyramids and then in Qatar, so it would be amazing if I can add another one here.”

The final will be held at 21:00 (GMT+2) tomorrow (December 18) and the action will be shown live on SQUASHTV and the channels of contracted broadcast partners.

By ANDY WHIPP – Squash Mad Columnist Now that the opinions from social media are in, let's take a look at Mazen Hesham’s Twitter debate...
Read more