Guest Contributor February 10, 2020 No Comments on Diego Elias wins in Detroit and backs Jonathon Power to take him to the top 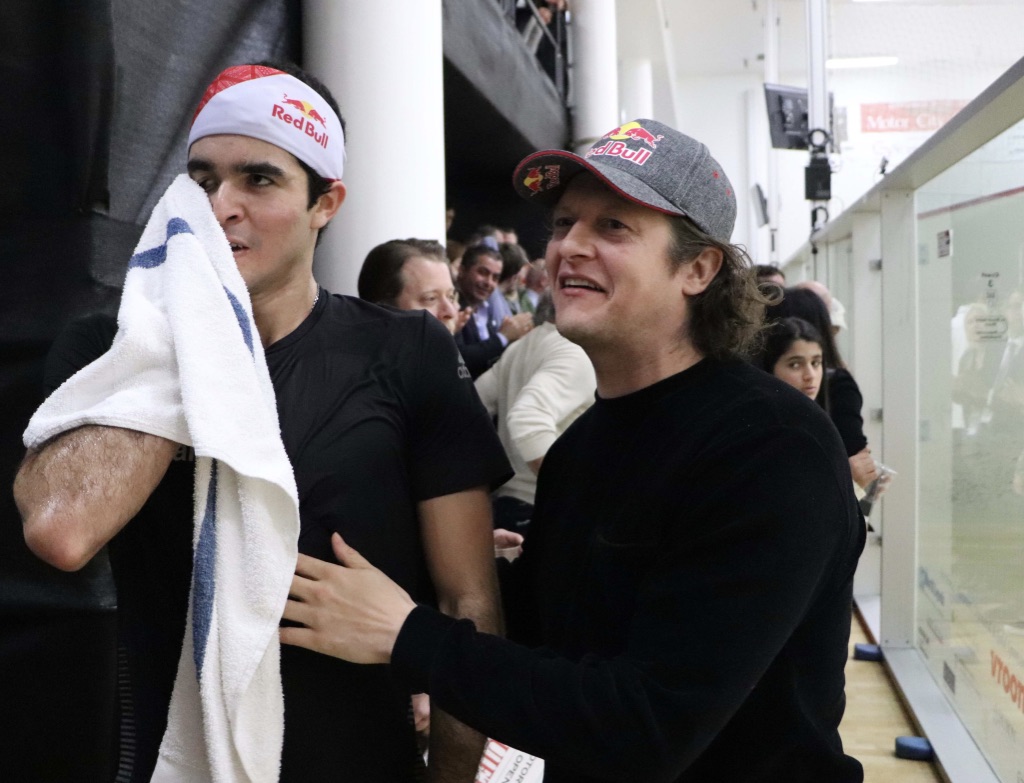 ‘Squash needs a new face up there and if he puts the time in so will I,’ says Power
By MATT SCHOCH – Squash Mad Correspondent

Bloomfield Hills, Michigan – With prodigious skill, size – and an electric smile to boot – Peru’s Diego Elias has the recipe to become one of the famous faces of professional squash.

If the World #6 ever makes it to the top, his win at the 21st annual Motor City Open presented by Sturbridge Capital will be one to look back on that kicked his career into a higher gear.

The 23-year-old finished off his dominant run to the finals with a convincing 11-4, 11-5, 11-4 victory over Mohamed ElSherbini of Egypt Sunday, winning his first MCO title on his sixth try at the Birmingham Athletic Club.

“I’ve been here so many times,” Elias said. “I’m just really happy and I think I played my best squash this week and I’m happy with the result.”

Elias lost as a qualifier in 2015 and dropped first-round matches in ’16 and ’18 – sandwiched around a semi-final appearance in 2017. Last year, Elias lost an epic five-game final to Egyptian Mohamed Abouelghar.

In so doing Abouelghar became the seventh Egyptian to win the event in 10 years, a run ElSherbini hoped to continue in this year’s $70,000 event. But at 6ft 2in tall, Elias’ length and power provides a unique challenge, as he proved this week in Michigan.

After needing five games to knock off England’s Nathan Lake in his first outing, Elias won his final three matches without losing a game.

In a week when upsets shook the MCO field, Elias faced just one seeded foe, sweeping eighth-seed Cesar Salazar of Mexico in the quarters.

“You saw the upsets this week,” Elias said. “They are all playing really, really good. The level of the 40th in the world is getting closer and closer to the level of the top guys.”

Elias had an important ally this week in former MCO champion Jonathon Power of Canada, who won at Birmingham Athletic Club in 2003 and 2005. Power has helped coach the Peruvian since he was 14 and assumed a larger presence with Elias after a disappointing finish last month at the J.P. Morgan Tournament of Champions in New York City.

“He sort of was getting stuck, and I felt like getting from six to one is a long way,” said Power, who retired at No. 1 in 2007. “He needs it, and squash needs a different face up there. He made the commitment to work a little harder and put more time into it, and I said I’ll put more time into it if he does.”

So far, so good as evidenced in Michigan this week.

“His adaptability and intelligence is very high, and I think it’s going to pay off very quickly,” Power said. “This type of event is a good momentum builder. It’ll continue.”

Added Elias: “I can and I want to get to the top of the rankings really soon.”

Elias broke a racket string with a winner in the second game. A winner near the front corner of the court while Elias was moving backward also drew a thunderous applause in the third as his win became inevitable.

The length of the “Peruvian Puma” proved difficult for ElSherbini to combat, especially after four tough matches in the previous four days.

Not even switching his shirt in Game Three to his signature pink was enough for ElSherbini to slow Elias down.

“I came here and I thought I might get knocked out in the first round,” a modest ElSherbini told the crowd after the match. “I didn’t have more than three pairs of shorts or three shirts on me.”

ElSherbini was self-assured in an interview later, as he said he expects his post-MCO career to take off in his first season as a full-time pro.

Like Elias, ElSherbini’s career will receive a boost from his MCO finals run. Ranked World #47, ElSherbini knocked off the 14th, 10th and 22nd ranked players en route to the finals berth.

“I wanted to play well in the last match, but Diego was too solid,” ElSherbini said. “I’m not at his level yet, but I will be soon.”

ElSherbini said he hopes his success will gain him more funding in Egypt, a bastion of many of the sport’s greats.

“The main problem in my country is there are too many good players,” ElSherbini said, referencing other Egyptian pros who fall short on exposure and funding. “We will just prove ourselves with our racquet and they will run after us after that.”

ElSherbini said he will be back at the MCO next season, and Elias said he hopes to be back for a seventh straight appearance.

In addition to their share of prize money, Elias and ElSherbini won watches from Greenstone’s Jewelers.

MCO organizers announced $12,000 was raised for the Racquet Up Detroit program, a youth development non-profit that combines squash, mentoring and community service. Through the years, the event has raised $250,000 for the program, tournament co-chair Derrick J. Glencer said.