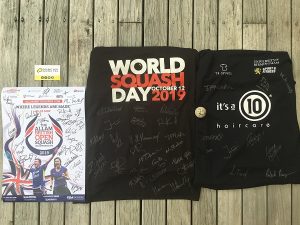 The latest delivery of signed squash memorabilia to New Zealand, after being unpacked and enjoying the heat of the Southern Hemisphere summer sunshine

Jarrod Van Driel, a renowned squash coach based in Auckland, New Zealand, is currently enjoying a double dose of success for his Squash Academy. 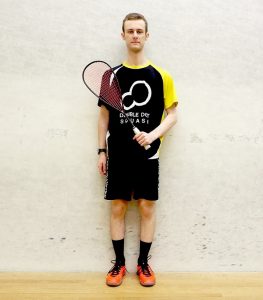 The first part of Jarrod’s double success involves receiving a package from the other side of the world which contains an array of squash collectables and memorabilia he won during a recent charity squash auction. The second element of success concerns one of his young Academy Ambassadors, who has travelled in the opposite direction to the UK in order to compete in 2 high profile junior squash tournaments, and who has performed well.

Jarrod’s spending spree saw him secure 4 out of the 5 lots available via the latest World Squash Day Auction, which took place in November last year raising funds for the PSA Foundation to contribute towards its many global squash community projects.

The World Squash Day Auctions have taken place since 2016, raising funds for many good causes, including Unicef, the Sumner Malik Fund and the Bronglais Hospital Chemotherapy Unit, the chosen charity of legendary squash coach, the late John Batty.

Indeed, Jarrod is no stranger to these auctions, having secured many lots in previous Auctions, including multiple squash balls, SquashTV camera lens covers, numerous items of clothing and rackets, all signed by a vast array of PSA World Tour stars, past and present. His current haul includes the 2019 Auction’s star lot, a World Squash Day official shirt signed by competitors at the 2019/20 season opening events at Nantes and San Francisco.

Jarrod has stated his intention to eventually display his ever growing squash memorabilia collection for all to come and see in some form of squash museum. From that perspective, he is already looking forward to the next World Squash Day Auction, which is set to take place later this year, with pledges of signed items already having been received from many PSA World Tour stars. 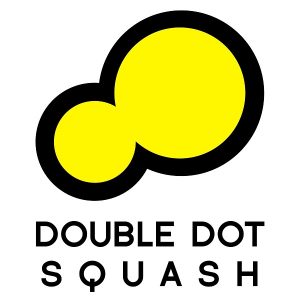 The distinctive Double Dot Squash logo, which adorns all their clothing, print and digital media

His Double Dot Squash Academy has already made quite an impact on the New Zealand squash scene. Their core services are around coaching, competitions, and their shop. They provide squash services for all ages and levels.

They have a comprehensive squash programme framework and pathways in place, directed by a coaching method based on “evolving total body movement and the mind,” and core values of attitude, enjoyment and work ethic.

They also run an in-school squash programme which is delivered to help introduce more kids to the sport and promote the enjoyment of squash. 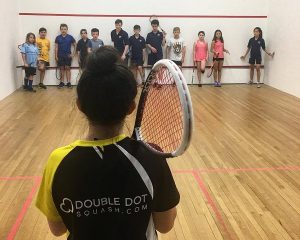 The Academy also runs a programme for selected players who are highly committed to their squash improvement and aim to reach the top level of play. These Academy players train most days of the week in individual and group sessions, as well as through fitness and solo based sessions, with holiday camps in the off season. 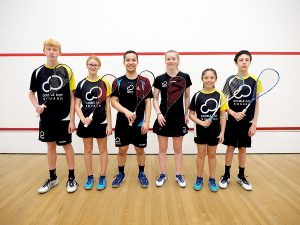 A group of current Double Dot athletes and Ambassadors

Throughout the year, the Academy travels as a group to various national tournaments throughout New Zealand to compete, as well as to support each other.

Through its team of coaches, ambassadors, support staff and athletes, the Academy works hard to promote its brand throughout New Zealand and internationally. They keep everyone up to date with the latest news from Double Dot Squash through their Twitter, Facebook, Instagram and YouTube pages.

Anabel was seeded 5/8 in the Scottish Junior Open and finished a creditable 5th overall, notching some good victories over higher ranked players. In the British, she was unseeded and again managed some great performances to finish 20th overall. 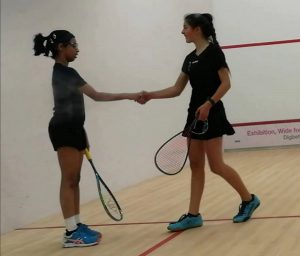 Anabel enjoying a victory moment in one of her BJO matches at Edgbaston Priory Club in Birmingham, England

As a Double Dot Squash Ambassador, the Academy sponsors her and supports her at tournaments, helping to build a social media presence and various other opportunities and support. Double Dot currently has six Ambassadors in total, with more likely to be added in the future.

We at Squash Mad took the opportunity of Anabel’s presence in the UK to ask her a few questions about her experiences over here. The questions were asked whilst she was still competing at the BJO …

SM: How have you found competing in the SJO and BJO and are you happy with your performances? What have you learned squash wise?

AR: It has been a real eye opener to see so many girls playing at a high level! It is not easy coming from New Zealand because we are so isolated and not many good players come to our tournaments, so getting to play amongst the best in the world is really exciting and motivating to me.

My performances have been good, but I don’t feel I have played my best squash yet, and I know it’s getting a bit late for that, but that’s fine. I can only try my best and let the good or bad results come.

What have I learned squash wise? To be honest, I don’t know. It has been so many new things that I feel are starting to sink in. It has been an overwhelming learning experience on so many levels. If I had to say one thing it would be that I need to believe in myself always. My goal for these tournaments was to test how good I am compared to the best in the world. I have learned, so far, that there is a lot of work to do, but that it’s not out of my reach.

SM: What do you think of the squash facilities you have visited whilst in the UK?

AR: Incredible! Different to the ones we have in NZ. I think that my squash club (SquashGym) is the best one in NZ, but it is only that, a squash club. In Edinburgh, I got to play at Oriam, a high performance, multi-sport venue with multi-sport indoor courts (basketball, volleyball, badminton, indoor football, etc), an indoor football stadium, an indoor football practice pitch, a fully equipped gym, physios, medical doctors and everything else that supports the development of high performance athletes.

In Birmingham, I got to play at Edgbaston Priory Club. My dad keeps reminding me that it has about 30 tennis courts with multiple surfaces like synthetic grass, natural grass, clay, hard court and even an indoor facility for playing during the winter. I haven’t seen what else it has got, but adding the 10 squash courts, the restaurant, the very posh changing rooms and club house, it makes for a great facility to play at.

I also noticed that neither of these fantastic places has squash doubles courts though, and SquashGym has two, so shall we call it a tie?!

SM: Have you found any time to visit any places away from squash clubs whilst over here? If so, where and what has impressed you the most?

AR: Yes! My uncle lives here and he took us for a tour of London on Tuesday. It was amazing! Heaps of cool sites like Buckingham Palace, Pall Mall and even the Lloyd’s building that looks like a robot! Too hard to say what has been my favourite, but they have all been impressive in one way or another. 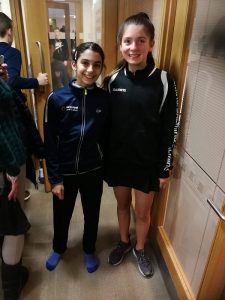 Anabel (right) has made a lot of new friends during her time at the SJO and BJO, including the incredible Girls U11 BJO Champion, Amina Orfi (left) of Egypt

We thank Anabel and her dad for taking time out from practice and watching the BJO action to answer our questions and hope they have a safe trip back to New Zealand. We also wish her, and all the Double Dot Ambassadors, the best of luck in their future squash endeavours. We at Squash Mad will watch their progress with great interest and provide further reports and updates in the future. We also look forward to being present at, and reporting on, the opening of Jarrod’s future memorabilia museum!

For more information about the Double Dot Squash Academy and the work it does, see their website: https://www.doubledotsquash.com/

You can also follow them on their social media channels, links below: