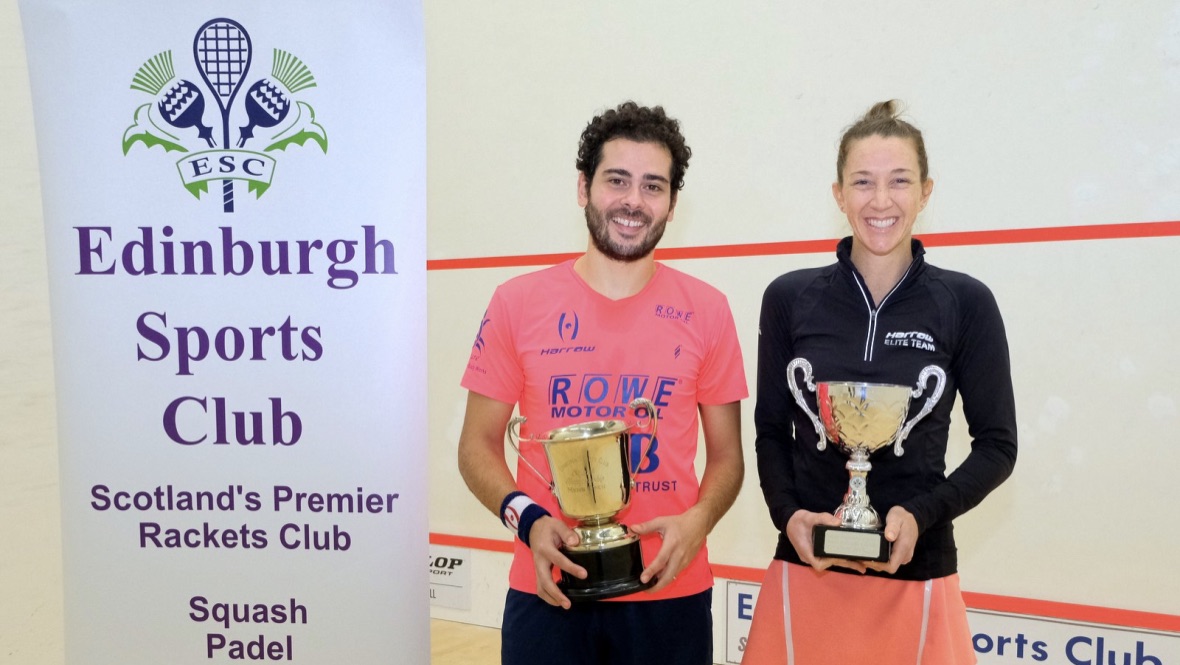 Donna Lobban completed another marathon effort to beat Julianne Courtice in the final of the Edinburgh Open. But husband Greg found the skills of former world champion Karim Abdel Gawad too much to handle as the Egyptian superstar won the men’s final in straight games.

Greg had followed up a PSL win over James Willstrop a few days ago by toppling No.2 seed Paul Coll and then finishing strongly to beat five-times champion Daryl Selby in a 96-minute semi-final last night. No wonder the tank was looking a little empty against the phenomenally gifted Gawad.

The day belonged to Donna, the woman who has returned to playing top-class squash one year after learning to walk again following surgery. She and her husband have both benefitted hugely from the coaching insights of former world champion Nick Matthew and, as well as tactical nous, he has clearly instilled a battling, never-say-die attitude.

Donna had already survived two five game thrillers to reach the final, while second seed Julianne Courtice had enjoyed an easier passage to the deciding contest.

Despite a good start to the first from Donna, Julianne pegged it back to take the lead 11-6. Donna fought back to take the next two 11-9 but when Julianne claimed the fourth 11-7 Donna was looking at a third successive fifth-game decider.

Donna eased ahead, 8-5, Julianne closed to 6-8 but Donna pulled away again and, unlike her previous matches, it only took one match ball for the Aussie-cum-Scot to claim her first ESC Open title 11-8 in 56 minutes.

“It’s been a tough week,” admitted the new champion. “I’ve had some tough battles and I was really hanging on there at times. I wish I had Jules’ racket skills, but I managed to get through in the end. When I think that this time last year I was learning to walk again, I’m really delighted to have come back and to win this title feels really special.”

The men’s final saw Greb Lobban aiming to continue his run of upset results to reclaim the title he won in 2018, but Egyptian Karim Abdel Gawad, who came through to the final with two five game victories, was in no mood for another thriller.

Karim quickly got into his stride, taking the first two games 11-8 with Greg pulling a few points back towards the end of each. There was no recovery in the third as Karim pulled away again, claiming the match and the title 11-4 in 30 minutes.

“People say they’d love to get on court with the top guys,” joked Greg afterwards. “I don’t know why, it’s horrible! I’ve had a good week, but all credit to Karim, he controlled the match from start to finish and everything he tried came off.”

Gawad was delighted with the win. He said: “It’s my first time in Scotland and I’ve really enjoyed it. The club, the crowd, the court are all great, and the prize money helps too! It would be great to see a big PSA event come to Scotland, but hopefully I’ll be back to defend my title next year anyway.”