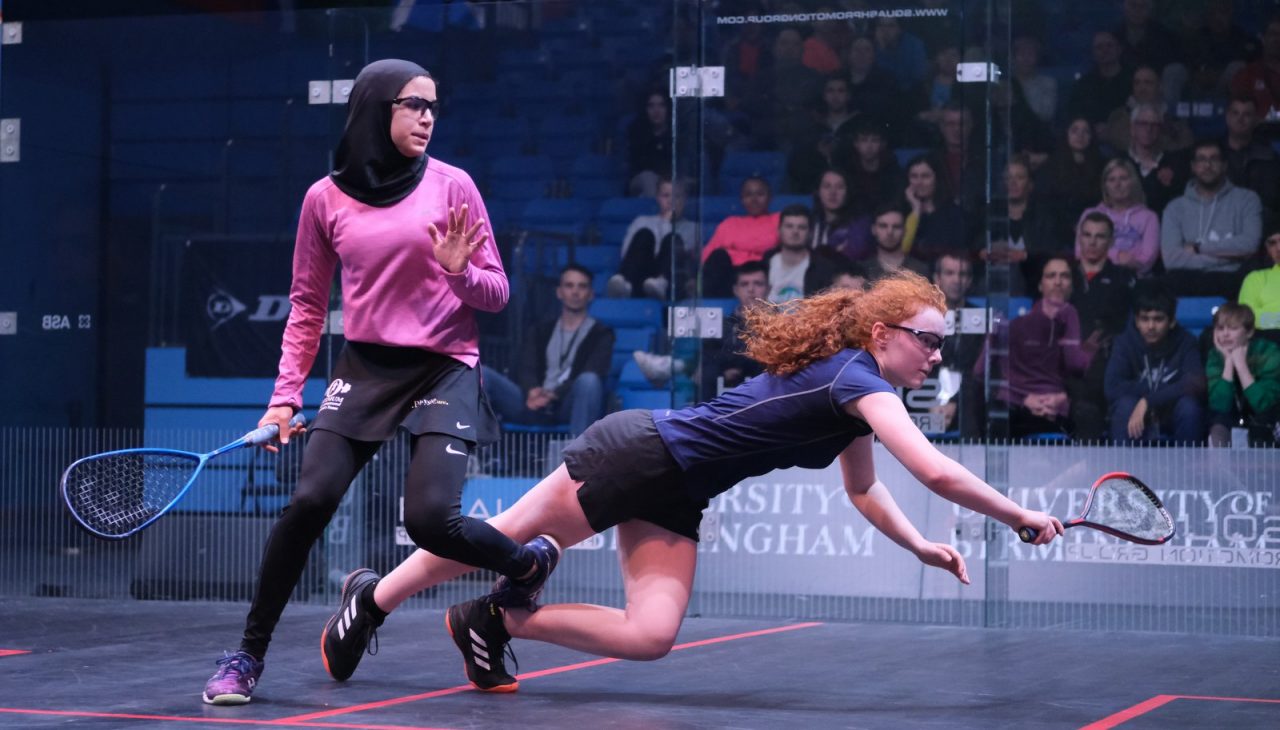 Katie Malliff dives across court on the way to victory

Egypt ruled the roost with semi-final spots up for grabs on day three of the Dunlop British Junior Open 2020 in Birmingham.

The African nation set up all-Egyptian last-four clashes in the boys U13 and U11s and bagged three of four berths in the boys U19, girls U15 and girls U11s to secure 25 of the 40 semi-final places on offer as Saturday largely went to form – although another hectic day was not without some major upsets.

Malaysia got their own back in the girls U17s when top seed Aira Azman won through to Sunday’s clashes in three straight games over Egypt’s [9/16] Malak Khafagy.

“I was a little nervous, starting the day on the glass court, but I was happy with my performance and pleased to be through,” said Azman.

Azman waited until nearly 9:30pm local time to catch a glimpse of her sister Aifa [2] in the girls U19s and was not disappointed as the three-time BJO champion dispatched Egypt’s [5/8] Malak Mostafa in straight games.

Girls U19s [1] Jana Shiha was another keen spectator late on following her win in four against England’s Alice Green as the oldest division went to form, both [3/4] duo Marina Stefanoni (USA) and Farida Mohamed (Egypt) keeping their chances alive.

Malaysian boys U17 [5/8] Ishant Shah came through a five-game tussle with India’s [3/4] Neel Joshi and home favourite [1] Sam Todd had to battle early on but stuck to his task admirably against Egyptian [9/16] Mohammed Nasser.

“The first game (12-10) was tough, winning that made a difference,” said Todd, the U17 runner-up last year who is seeking a third BJO title.

He will play Pakistan’s Noor Zaman [9/16] who was up to his old tricks by upsetting Malaysian [5/8] Ameeshenraj Chandaran in four despite losing the first game.

Hosts England and Malaysia each sent four players to the semis in the ten age categories, with Pakistan (three) and India and USA boasting two each.