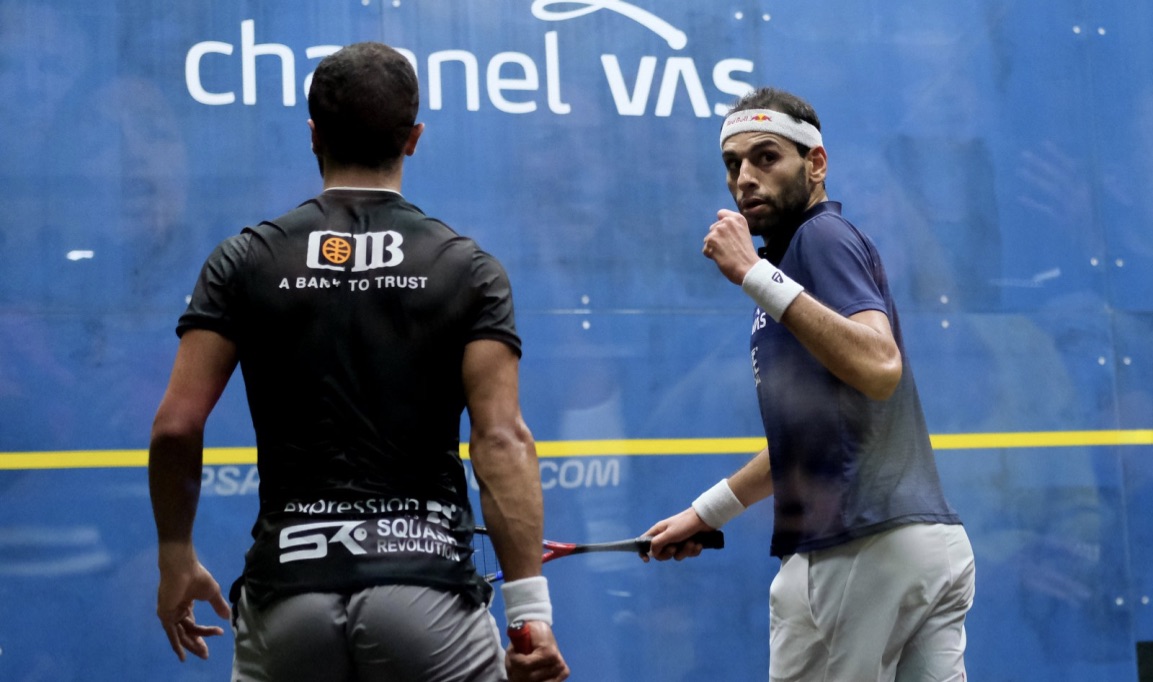 World No.2 ElShorbagy showcased his mental fortitude to come from a game down against 26-year-old Abouelghar to reach his fourth final of the season, after winning both the China Squash Open and Oracle NetSuite Open titles, before losing out in the final of the U.S. Open last month.

Abouelghar, who was playing in his first semi-final of the season after struggling with a shoulder injury, began the match strongly to race into a 7-0 lead before ElShorbagy was able to get his first point on the board, before taking an 11-2 first game.

The 2017 champion ElShorbagy fought back with dogged determination in the second, when with the scores tied at 9-9, he pushed on to draw back level. The former World No.1 then continued to step further up the court and looked back to his old self as he roared himself to victory to close out a 2-11, 11-9, 11-6, 11-7 win in 49 minutes.

“There was a very crucial time in the second game when we were both 9-9 and I think after that game when I won it, I got into him mentally and physically a little bit,” said ElShorbagy afterwards.

“That’s the time when I pushed really hard at the beginning of the third, just to show him that it was going to take a marathon if you want to get through it and I think I got into him a bit mentally in that third.

“I’m playing my fourth final in five tournaments this season and it’s what I always require from myself coming back every year. I’ve been trying to stay as consistent as I can and being in finals is what I live for. Every season when I do well I have never had a team around me that has told me I have done well, it’s always a team around me that have looked at what I have done wrong this season and that’s what I think has always got me to the top of my game.”

ElShorbagy will face compatriot Gawad for the 15th time in their careers, and for the first time this season, for the PSA World Tour Gold title after the latter scored a comfortable 3-0 victory over New Zealand’s World No.5 Coll.

PSA World Championship runner-up Coll, who lifted the title back in 2016, was unable to find a reply to a free flowing Gawad who dominated the court with ease with his artillery of incredible shots to take an 11-8, 11-4, 11-3 victory and reach his 35th PSA final.

“I have been playing very good squash recently,” said Gawad afterwards. “At the US Open, even if I didn’t win it, I was happy with my game, and in Cairo, I really played some good squash. In the Worlds, I was pretty tired from the Egyptian Open, and somehow, I felt a lot of pressure there.

“I am playing with no expectation other than playing my best squash, not thinking about losing or wining, really, no pressure and that makes all the difference.”

The final of the Channel VAS Championships will take place tomorrow (Sunday November 24) at 15:30 local time (GMT) with the action shown live on SquashTV (rest of world), Eurosport Player (Europe only) and the official Facebook page of the PSA World Tour (Indian Subcontinent only).