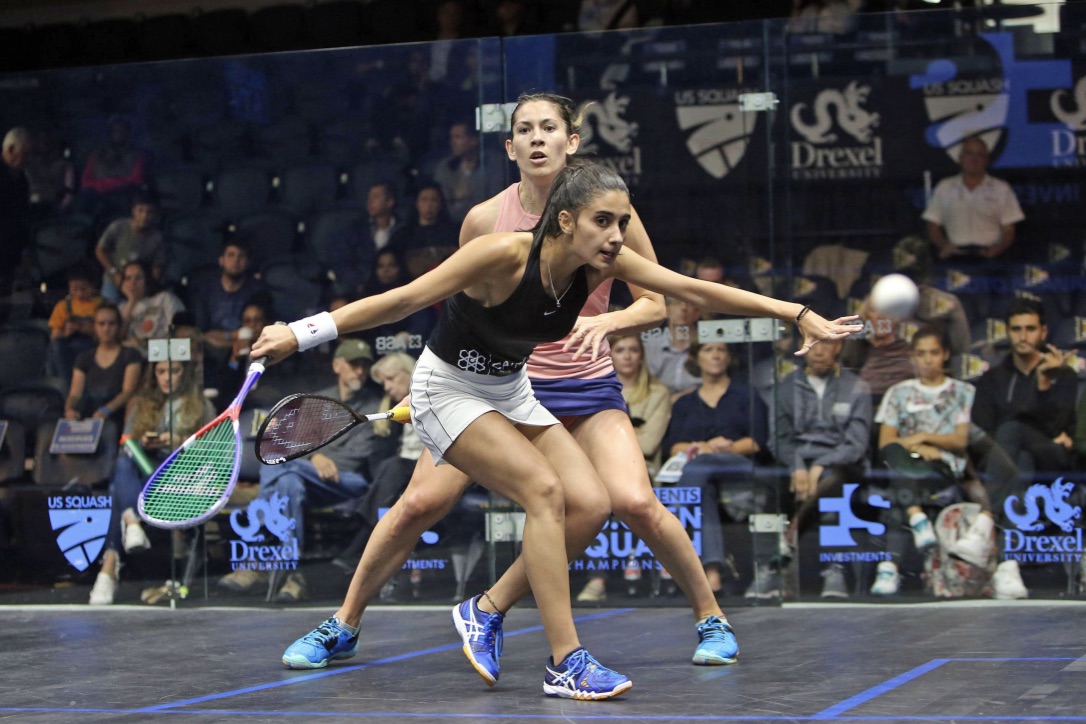 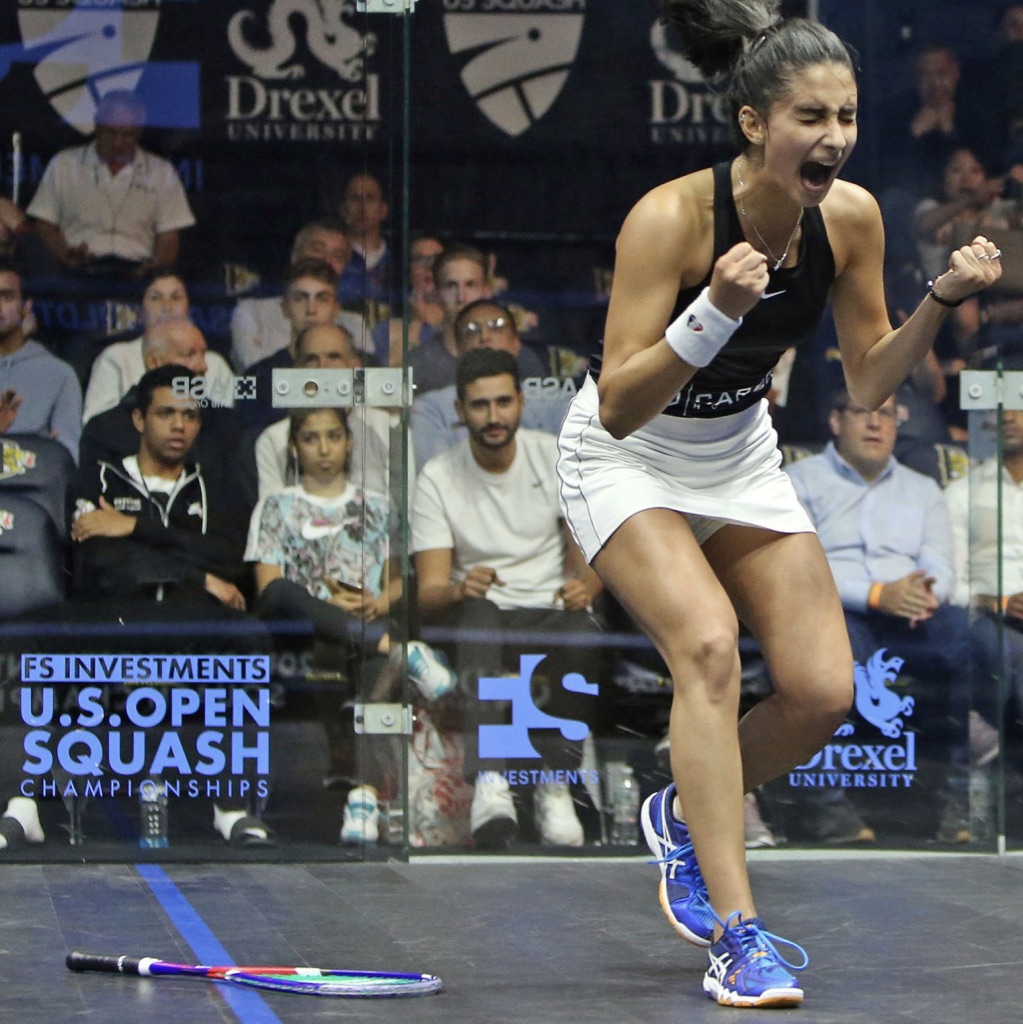 King held two match balls in the fourth game and the 31-year-old looked set to get the better of her younger opponent.

But a dogged showing from Elaraby saw the Egyptian come back from the brink, and she kept her focus despite a number of refereeing decisions in the decider to book her place in the quarter finals.

“I’m out of words,” said Elaraby afterwards. “I’m really happy with how I played and how I managed to go through the match. I can’t believe it. I feel as though what I was working on in the off season has been paying off now. My coach, Mohamed Effat, has worked with me so hard during the summer, so I’m really happy that I was able to play my best squash.

“My coach just said that I didn’t have anything to lose and just give it my all and that’s what I did.” 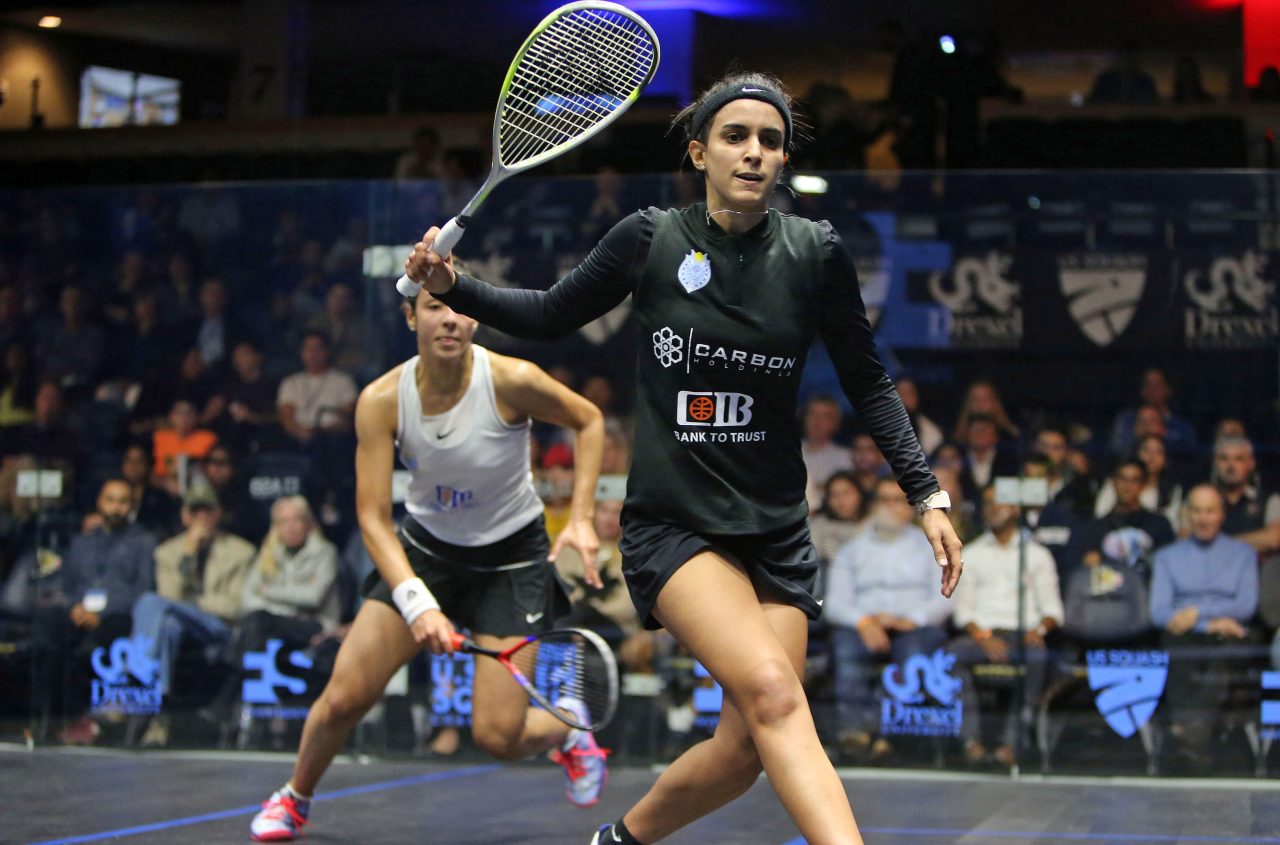 Nour El Tayeb powers through to the quarter-finals

Elaraby will take on World No.3 Nour El Tayeb for a place in the semi-finals after El Tayeb put in a composed performance to overcome reigning World Junior Champion Hania El Hammamy, beating her 11-7, 11-7, 11-8 to avenge her Black Ball Open defeat to the teenager earlier this year.

“This court holds a lot of special memories for me,” said 2017 US Open champion El Tayeb.

“It was my first major title and doing it with Ali [husband, Farag] was extremely special and even though I had a bad result here last year, I still feel very happy and emotional coming here.”

Defending champion Raneem El Welily continued her imperious start to the season with a 21-minute dismantling of fellow Egyptian Yathreb Adel, and she will play World No.7 Sarah-Jane Perry in the last eight, with Perry requiring four games to see off the dangerous Malaysian Sivasangari Subramaniam. 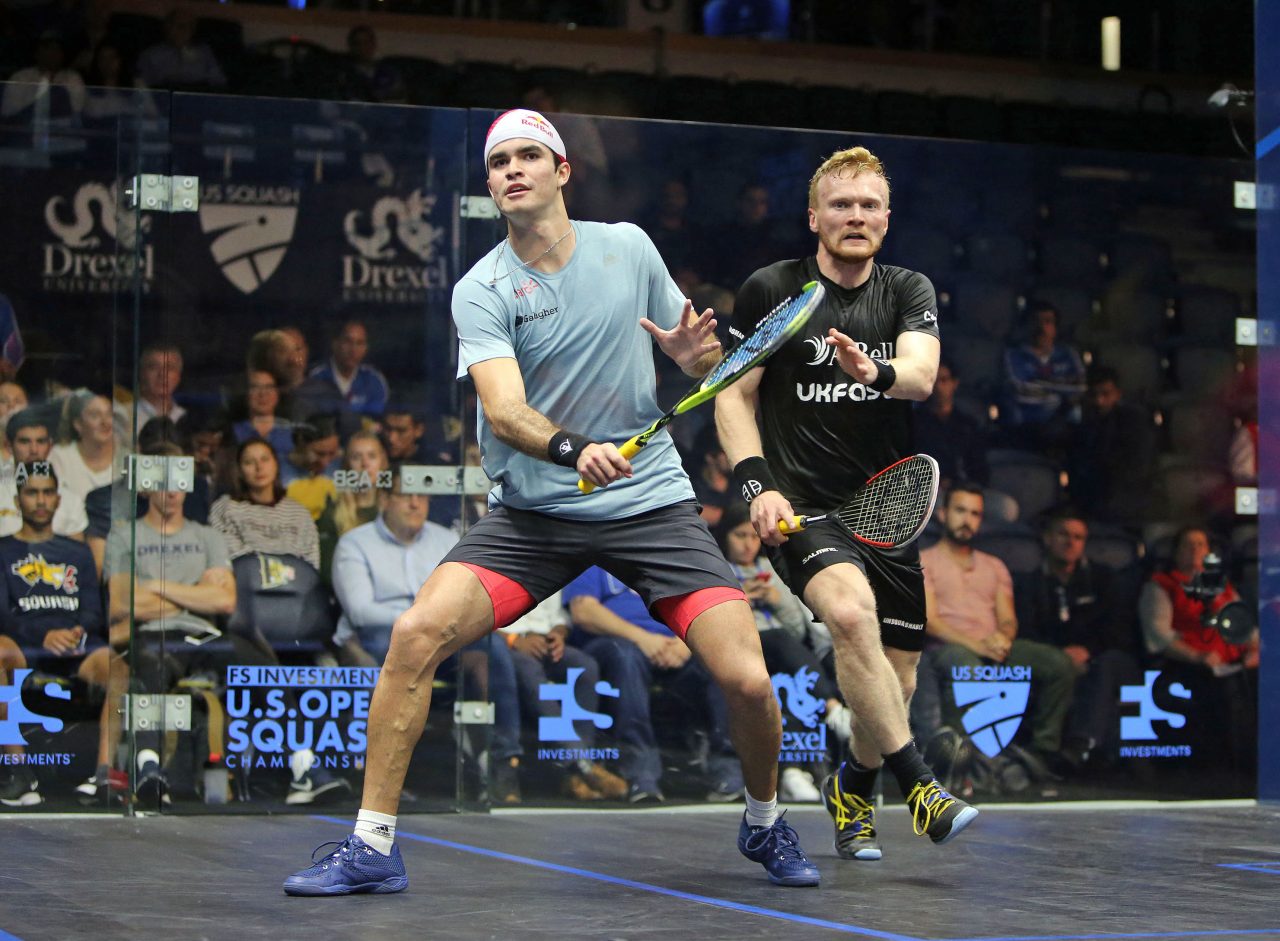 In the men’s event, Peru’s Diego Elias navigated a tricky fixture against World No.12 Joel Makin, with an immaculate performance seeing the World No.7 run out an 11-5, 11-9, 11-8 winner.

The Lima-based 22-year-old had beaten World No.12 Makin in their previous two encounters on the PSA Tour, and added a third victory to that tally after a virtuoso display saw him hit his corners with regularity and move Makin around the court superbly to vanquish the Welshman.

“I feel good. I lost a bit of fitness after winning the Pan Ams, but after that I started training again and I have another goal, which is to win one of these big events,” said Elias, who won a gold medal at the Pan American Games during the summer.

“I’m really happy, I knew this was going to be really tough, he’s a really tough player, he’s so physical and fit and I knew it could have been 100 minutes, so I’m really happy I managed to win in three. We [Elias and his father] try to go to all of these events together and all of this wouldn’t be happening if it was not for him. I’m really happy he can come to these tournaments with me, and I really hope I can win one of these big ones.” 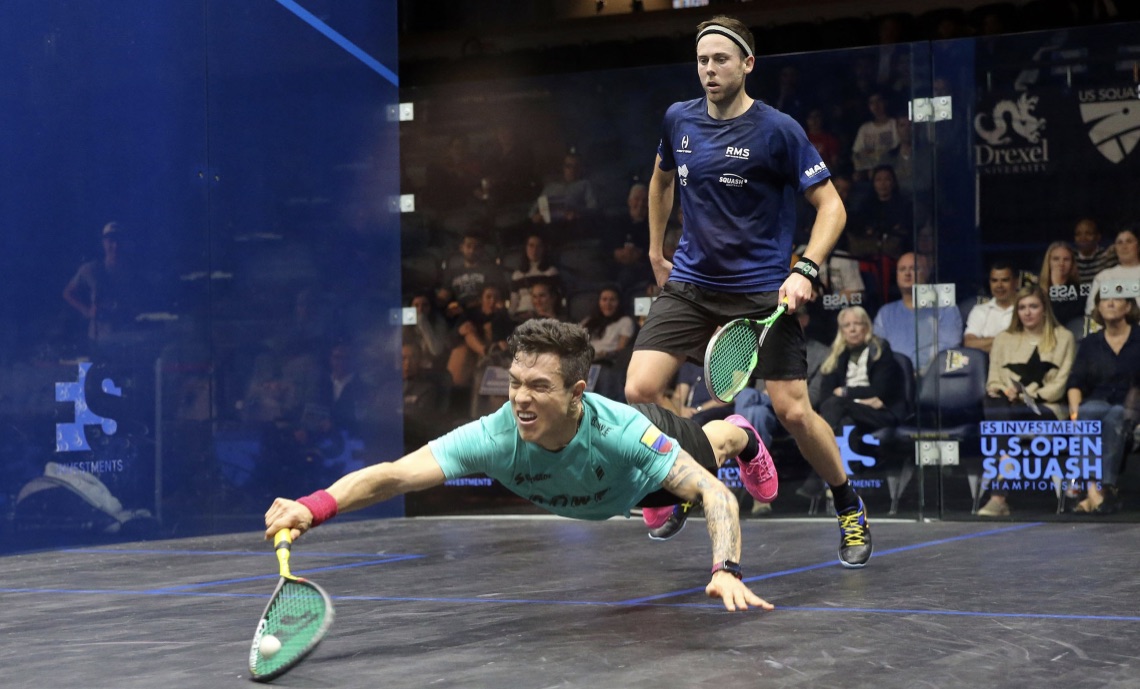 Miguel Rodriguez dives across the court against Ryan Cuskelly

Elias will do battle with World No.4 Karim Abdel Gawad, who advanced to the quarter finals courtesy of an 11-5, 16-14, 11-7 win over France’s Gregoire Marche.

Colombia’s Miguel Rodriguez also progressed to the quarter finals after beating Australia’s Ryan Cuskelly 13-11, 11-9, 11-7 and his reward will be a last-eight match-up with World No.1 Ali Farag.

Farag, the 2017 US Open champion alongside wife El Tayeb, built on a comfortable first game victory against Englishman Adrian Waller to complete an 11-3, 11-9, 11-8 victory.

“I’m really happy and feeling sharp and looking forward to progressing through to the quarter finals,” Farag said. 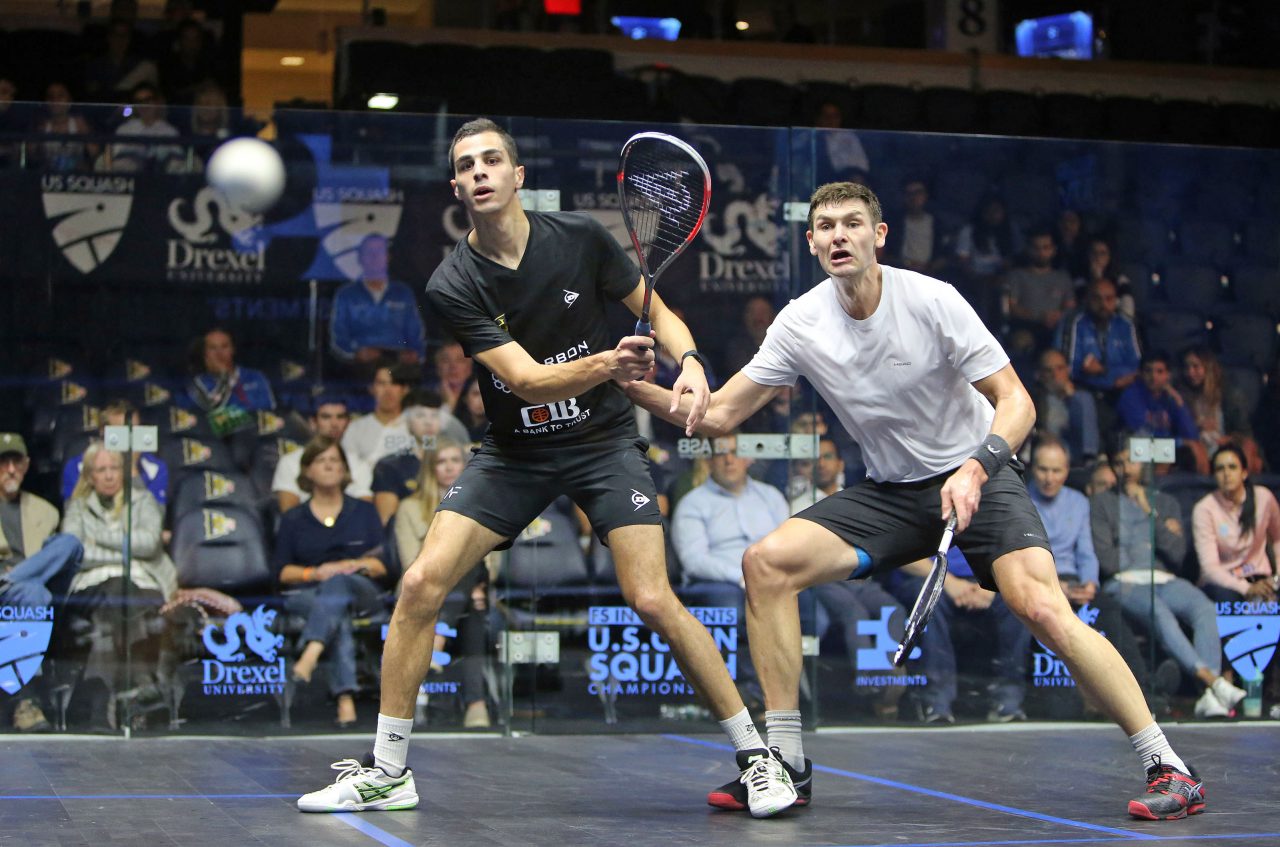 “Everyone is playing really well and everyone is really sharp and wants to do well this season. The season is still young but I hope I can achieve as much as last season and give it my all.”

Round three action at the U.S. Open continues today (Tuesday October 8) as United States No.1 Amanda Sobhy and defending men’s champion Mohamed ElShorbagy aim to qualify for the quarter-finals.

Play begins at 13:30 (GMT-4) and live coverage will be shown on SQUASHTV (rest of world), Eurosport Player (Europe only) and the official Facebook page of the PSA World Tour (excluding Europe and Japan).