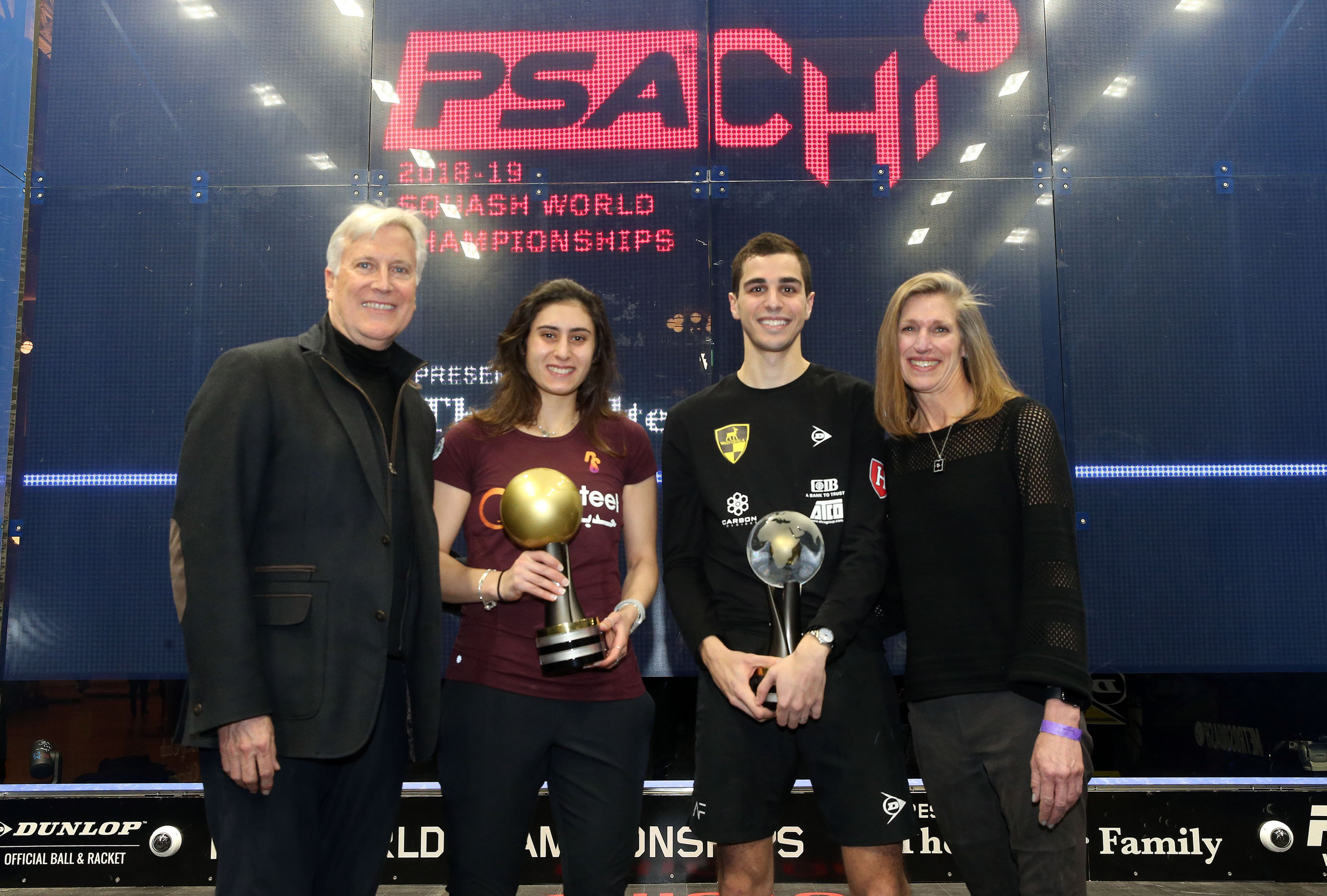 What a week for Ali Farag. March 1: he becomes world No.1. March 2: he is the new world champion
By SEAN REUTHE in Chicago

Egyptian duo Ali Farag and Nour El Sherbini have been crowned World Champions after they got the better of compatriots Tarek Momen and Nour El Tayeb, respectively, at Chicago’s Union Station earlier today to win the 2018-2019 PSA World Championships presented by the Walter Family.

The 2018-2019 PSA World Championships was the sport’s first $1 million tournament, with $500,000 split equally between the male and female athletes.

Just 24 hours after dethroning fellow Egyptian Mohamed ElShorbagy to take the World No.1 spot, Farag lifted the sport’s most iconic title after prevailing by an 11-5, 11-13, 13-11, 11-3 scoreline after 79 gripping minutes of action.

Both of the men’s finalists were appearing in the World Championships title decider for the first time, with Momen defeating both of the 2017 finalists – brothers Mohamed and Marwan ElShorbagy – en route. Farag, meanwhile, had toppled Germany’s World No.5 Simon Rösner in the semi-finals to book his final berth.

Fourth seed Momen fought back after going a game down to Farag, the No.2 seed. A crucial third game went the way of Farag on the tie-break and that proved pivotal as the 26-year-old powered to victory in the fifth game to write his name into the history books.

“As I stand here today, I can’t help but think about the road I’ve taken to be here,” said Harvard-graduate Farag following the biggest win of his career.

“If, five years back, you had told me that I would be standing here holding the World Championship trophy, then no chance would I have believed you. As a senior at college, I never thought about going pro and the main driving force behind it is Nour.

“It sounds like a cliché, but find someone who lifts you up day in and day out, I’m deeply blessed to have her in my life, and she is the one who pushed me to go pro.

“Winning the World Championships is one thing, but winning it in front of this crowd is something else. Thanks to the Walter Family, it’s the biggest prize purse that’s ever been on offer in squash and it’s a huge honour.”

Farag’s win came shortly after wife El Tayeb fell in the women’s final as World No.2 El Sherbini captured her third World Championship crown at the age of just 23.

Appearing in her fourth successive World Championship final – and fifth overall – El Sherbini dominated the opening stages against a nervy-looking El Tayeb to go two games up in just 18 minutes.

El Tayeb and Farag became the first married couple in sporting history to lift the same major sports title on the same day when they won the 2017 U.S. Open, and El Tayeb kept hopes of bettering that achievement alive when she battled back with a vengeance to halve the deficit, recovering from championship ball down in the process.

“I think I’m out of words,” said El Sherbini. “The last two games were really close and she was coming back. I think she likes it like that, she was a little bit tense in the first two games and then she started to relax. I was trying to focus point after point and I’m really happy of course.

“It was a really tough tournament for me, and a lot of things happened before I came here and behind the scenes. But I’m really glad that I came because one of the options was that I wouldn’t be able to come.

“I was improving match after match, and I had a lot of tough matches in the earlier rounds, but I’m really glad that I managed to get everything together this week.”