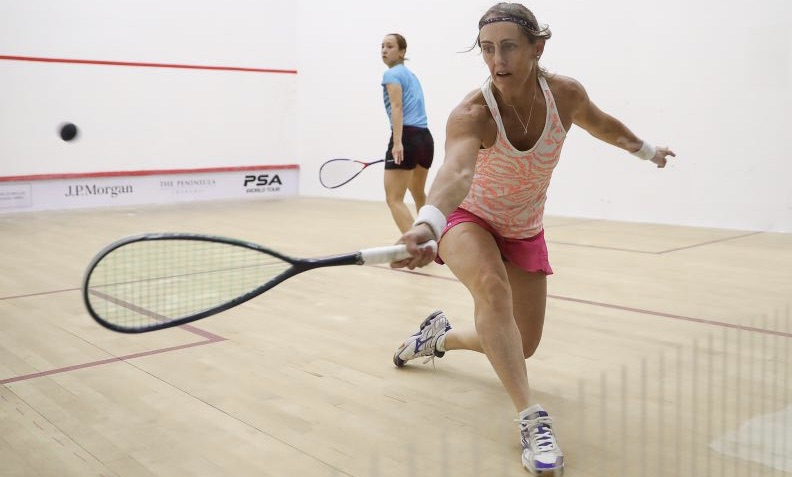 Rachael Grinham in fine form during her first round victory

Rachael Grinham rolls back the years
By ELLIE MAWSON in Shanghai

The 18-year-old Asal – who claimed his second World Junior title during the summer – showed he was in strong form as he comfortably overcame World No.580 Zhou, who was competing at the tournament for the third time.

Asal will now face England’s Tom Richards for a place in the quarter finals tomorrow. “I was really pleased with my performance today,” said 18-year-old Asal afterwards.

“Playing the wildcard is never easy, especially at his home club. It’s difficult to manage the first game, I just played my own game and that worked well today. He is playing well and I’m looking forward to my next match.

“Tom is a good player and I hope we have a good match. Our head-to-head is 1-1 and we will see what tomorrow brings.

“To balance a junior and professional career is tough, but I’m happy to finish my junior career with a double World Junior Championship. This tournament is amazing and I hope it continues for me.”

Joining him in the second round are compatriots Mazen Hesham and Youssef Soliman after they defeated Malaysia’s Eain Yow Ng and Ivan Yuen, respectively.

“I started really well, which is good,” said Hesham, who will face England’s Adrian Waller in round two tomorrow.

“He started to play better as well, in the third, as he got used to the court and then it became a bit scrappy. I’m really glad that I held my nerve and started to get back to the tie-break to win the game.

“Adrian and I played last season at the World Championships and I played him a few times in the summer. I like him, he is a nice guy off court and hopefully it is a good match and I manage to get the win.”

Meanwhile, Soliman has set up an encounter with compatriot and World No.1 Ali Farag tomorrow on the glass court atop the Peninsula Shanghai, which overlooks Shanghai’s famous Bund.

Elsewhere in the men’s draw, Asian interest comes in the form of Hong Kong duo Tsz Fung Yip and Leo Au after they both secured round one wins on the opening day of action in Shanghai.

Yip defeated Egypt’s Mohamed ElSherbini, while Au prevailed in a tough encounter with France’s Baptiste Masotti to reach the last 16, where they will face India’s World No.10 Saurav Ghosal and Mexico’s No.6 seed Cesar Salazar.

Van der Heijden put in a strong performance to down Malaysia’s Low and has set up a thrilling encounter with defending champion and World No.1 Raneem El Welily tomorrow.

“That first game, I think I was leading all the way, and then she kept coming back,” said 28-year-old van der Heijden.

“There were a few game balls on both sides, so to actually squeeze it in the end was a positive start. I think that first game was really important for me [to win].

“It’s very exciting, who doesn’t want to play on the glass overlooking the Bund in Shanghai. It’s a great opportunity and experience to play Raneem and I’m looking forward to it.”

Meanwhile, Letourneau – who is situated at the opposite side of the draw – will face No.2 seed and 2019 British Open champion Nouran Gohar for a spot in the quarter finals.

The 42-year-old Australian, who has won all of the sport’s biggest titles, will take on Egypt’s World No.5 Nour El Tayeb in the next round.

“I’m really happy with my performance today,” said the Grinham. “For me, these days, I don’t have any real ambitions to make a certain rank or anything. I just want to play well and be in shape. I’m over 40, so I just got off court and said to someone it’s good for me if I’ve had a match and I’m still in one piece! To win the first match in a tournament this size is really good for me and a good start for the season.

“It’s always fun playing Nour [El Tayeb]. She grew up around me in Egypt, when I lived there for eight years and I played at her club. I’ve known Nour since she was about nine years old and watching her play squash. She varies it a lot and mixes it up, which I admire about her game and I’m looking forward to having another match.”

It was also a strong day for Egypt in the women’s draw as Yathreb Adel, Nadine Shahin, Nada Abbas, Zeina Mickawy and World Junior champion Hania El Hammamy all claimed victories to advance to the last 16 of the PSA World Tour Gold tournament.

“Julianne has been playing really well,” said Adel following her win over England’s Julianne Courtice. “We saw her play last season and from her results I knew that I had to focus from the start, try to push her into the back and find my shots. I’m glad it worked.

“I was thinking ‘I have to push and win this game’ because it’s either going to be 2-0 or 1-1 and then it’s tight again. You never know what’s going to happen next, but I think after the second game I felt more confident and I sort of knew what was going to happen. I was trying to eliminate my errors and just keep going.

“I had a good pre-season and always when you have some time off and come back to tournaments you’re like ‘how did I used to warm up’ as if you forget everything, but then you start to get into it and it feels good to be playing again. Hopefully it will be another good season for me.”