Guest Contributor October 3, 2020 No Comments on El of a night as El Hammamy and ElShorbagy win World Tour Finals in Cairo 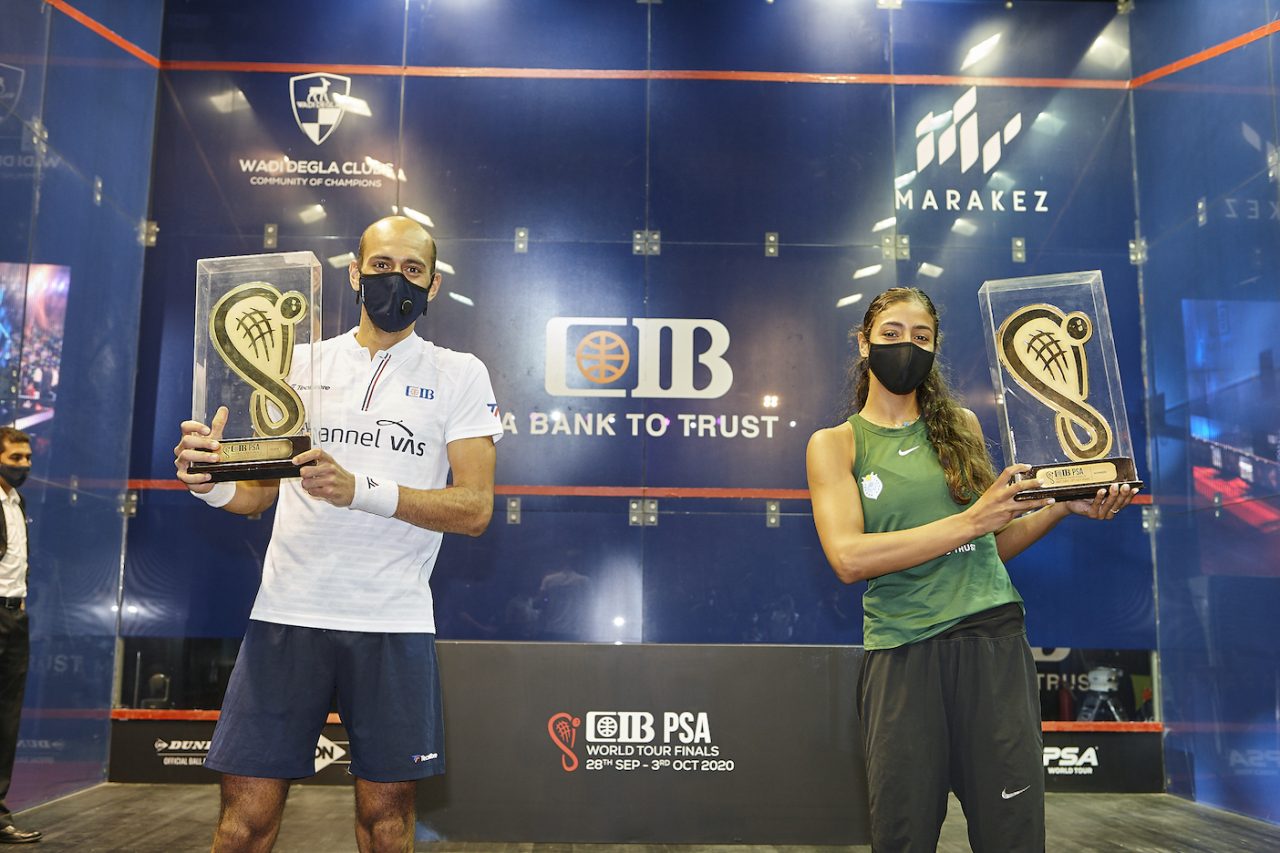 Egyptian duo Hania El Hammamy and Marwan ElShorbagy added their names to the rolls of honour at the prestigious CIB PSA World Tour Finals after they triumphed over Nour El Tayeb and Karim Abdel Gawad in tonight’s finals at Cairo’s Mall of Arabia.

The CIB PSA World Tour Finals brings the curtain down on the 2019-20 season after being postponed from June, 2020 due to the COVID-19 pandemic.

The 20-year-old El Hammamy has become the youngest female ever to win the prestigious title after completing an incredible comeback from two games down against El Tayeb, winning a brutal battle lasting 81 minutes.

El Tayeb came into the match off the back of winning the Manchester Open last week – the first event following the six-month suspension of the PSA World Tour – but El Hammamy was appearing in her second final in her last three tournaments after claiming her maiden PSA Platinum title at the Black Ball Open back in March, which was the final event before the suspension.

El Tayeb had won six of their previous seven matches and the match looked to be going according to form as she played some immaculate squash to go two games ahead.

But El Hammamy has a mental resilience that belies her tender years and the World No.6 struck back in the third to claw a game back. That rattled El Tayeb, who went off the rails completely as El Hammamy stormed to an 9-11, 9-11, 11-9, 11-4, 11-3 triumph to lift her sixth PSA World Tour title.

“I’m over the moon, I can’t believe I actually did it,” said El Hammamy afterwards. “2-0 down against Nour El Tayeb, it’s a nightmare and it’s really tough playing against her, she’s so strong physically and I’m really proud of myself after being 2-0 down, I kept pushing and I kept digging in.

“For the past week the positive thing has been that I kept fighting and today I can add that I am so happy with my performance.

“At the beginning I kept making a lot of errors and that gave her the advantage in the first two games. When I became patient and I kept playing straight lines and found my length and shots then that made the difference.”

Like El Hammamy, ElShorbagy has lifted the second major PSA title of his career and his first since the 2018 El Gouna International after taking out reigning champion Gawad by an 11-6, 11-5, 11-3 margin.

ElShorbagy has been in red-hot form in Cairo this week and finished top of Group B, with a 2-0 defeat against World Champion Tarek Momen – in a dead rubber after he had already qualified for the semis – being his only defeat of the tournament.

Gawad is a specialist in Egypt and was appearing in his fifth successive final on home soil, but he was blown away by the World No.7’s tactical nous and control of the racket and had no answer to a rampant ElShorbagy.

“My performance couldn’t have gone any better today,” said ElShorbagy. “Tactically, mentally, I was really looking forward to today. I think this is the best I’ve played since the beginning of the season, I knew that I could play at this level, I was just waiting for the moment and it couldn’t have come at a better moment. I’m really happy with the win tonight and I’m already looking forward to next week.

“Mohamed [ElShorbagy, Marwan’s brother] better be worried. He’s the current No.1, he isn’t here and I’m being realistic, I would have loved to have played and beaten him here but I still have a lot of work to do. He is the greatest player of our generation and he’s been there for a long time for a reason. I hope I will be giving him a hard time this year.”

Both El Hammamy and ElShorbagy take home equal prize money of $49,875 each which is the most lucrative winner’s prize in the history of the CIB PSA World Tour Finals.

They will next be in action at the CIB Egyptian Squash Open between October 10-17, which is the first Platinum event to take place since the restart of the PSA World Tour. The tournament will be held in front of Cairo’s iconic Great Pyramid of Giza.