Guest Contributor November 2, 2020 No Comments on ElShorbagy brothers power through in Qatar 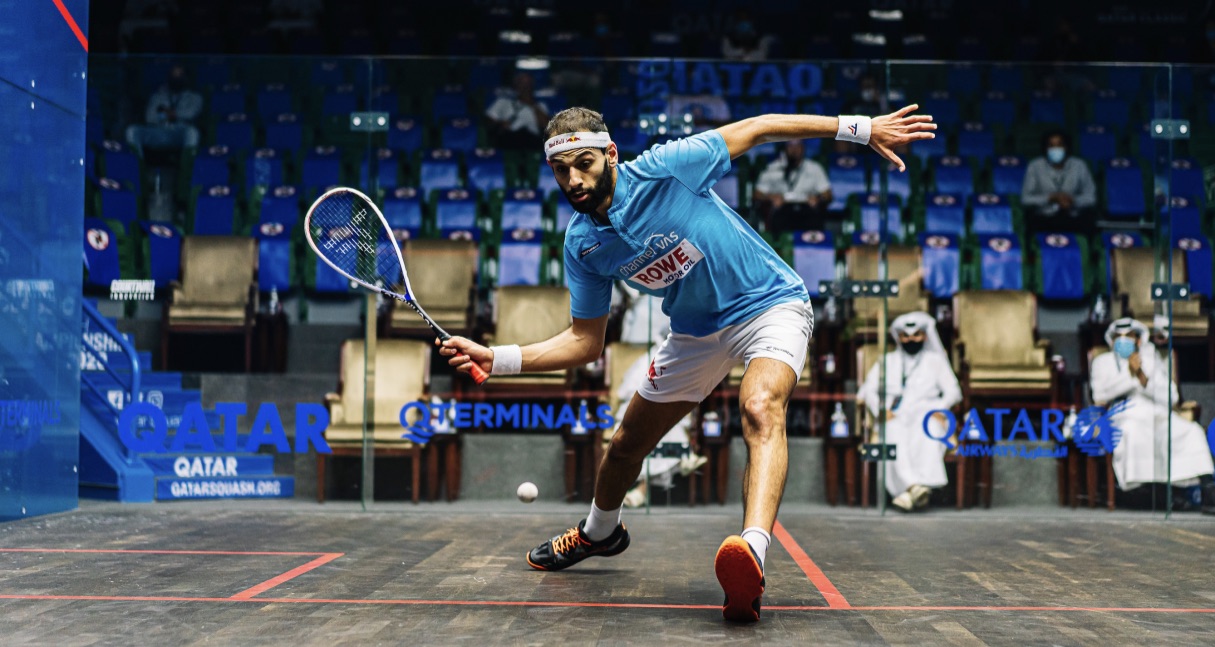 Mohamed ElShorbagy had to battle past George Parker

World No.6 Marwan ElShorbagy has booked his spot in the third round of the 2020 Qatar Classic, PSA World Tour Platinum tournament after getting the better of former World No.1 Gregory Gaultier at the Khalifa International Tennis and Squash Complex in Doha today.

ElShorbagy had beaten Gaultier in their last meeting all the way back in 2017 and controlled the match masterfully, refusing to get drawn into any discussions with the referee in a match that went through its scrappy periods.

The 37-year-old Gaultier lost his focus at times – even receiving a conduct stroke for ball abuse – and his frustrations contrasted with that of ElShorbagy, who cut a cool, composed figure on court as he closed out a confident 11-7, 11-4, 11-6 victory in 40 minutes.

“When I saw the draw, I knew that playing him would be really tough,” said ElShorbagy.

“Mentally, it is the toughest first match you can get because of what he has achieved. I watched him in 2006 when he played the World Championships [at the Great Pyramid of Giza] and he is someone who really inspired me. He was my role model, he still is my role model.

“I admire what he has done for the game and just seeing the way he moves, the way he plays, for me, he is one of the greatest players of all time. I am really happy to be on court with him. It is a pleasure for me and I hope that we see him for many years to come.”

ElShorbagy will play Germany’s Raphael Kandra in the last 16 after the World No.33 toppled India’s Saurav Ghosal to reach the third round of a Platinum event for the first time in 13 months.

Ghosal, the World No.13, took the opener but picked up a groin injury during the second game. He played on, but his movement was clearly inhibited as Kandra came back to win three games without reply.

“Altogether, this is definitely not how you want to win,” Kandra said. “Of course, he played on and he was still kind of moving but wasn’t at his best and I wish him a quick recovery, he probably has time now since COVID-19 is kind of taking us back. Overall, I’m super happy, it has been a while since I’ve been in the third round and I’m really looking forward to continue.”

ElShorbagy, a three-time Qatar Classic champion, lost his World No.1 spot to Ali Farag yesterday but can reclaim top spot if he wins the tournament and Farag fails to make it to the final. The 29-year-old will take on compatriot Youssef Ibrahim in the next round.

“He played really well, that’s the way he plays and it was up to me to respond and up to me to find a way to win,” said ElShorbagy.

“The fourth was very tight and it could have easily gone to a fifth game. He is such a great player and I have trained with him a few times down in Bristol. I know what he can do, I know how dangerous he is. He has so much potential, and I don’t think he knows how much potential he actually has.”

Ibrahim advanced following the retirement of Cesar Salazar due to injury, while Germany’s Simon Rösner became the first top 10 player to exit the tournament after falling to a peerless performance from World No.12 Fares Dessouky.

The pair had only faced each other twice on the PSA World Tour before, but they had an average match time of over 75 minutes. This clash, though, was only just over half of that time as Dessouky dominated throughout, beating the World No.8 by an 11-3, 11-9, 11-8 scoreline.

“Obviously, it was not an easy match,” Dessouky said. “I know it was 3-0 but it was very close. I had to dig really deep to get every single point and to play at a fast pace, which wasn’t easy at all, I am happy to be through.”

Dessouky will play Spanish veteran Borja Golan in the next round after the 37-year-old defeated World No.16 Omar Mosaad. There were also wins for World No.5 Paul Coll and Frenchman Gregoire Marche, respectively.

Round two continues tomorrow (November 3) when defending champion and World No.1 Farag will begin his tournament. Play starts at 11:00 (GMT+3) and will be shown live on SQUASHTV and the official Facebook page of the PSA World Tour (excluding Europe & Japan).