Alan Thatcher April 12, 2019 No Comments on ElShorbagy brothers to meet in DPD Open 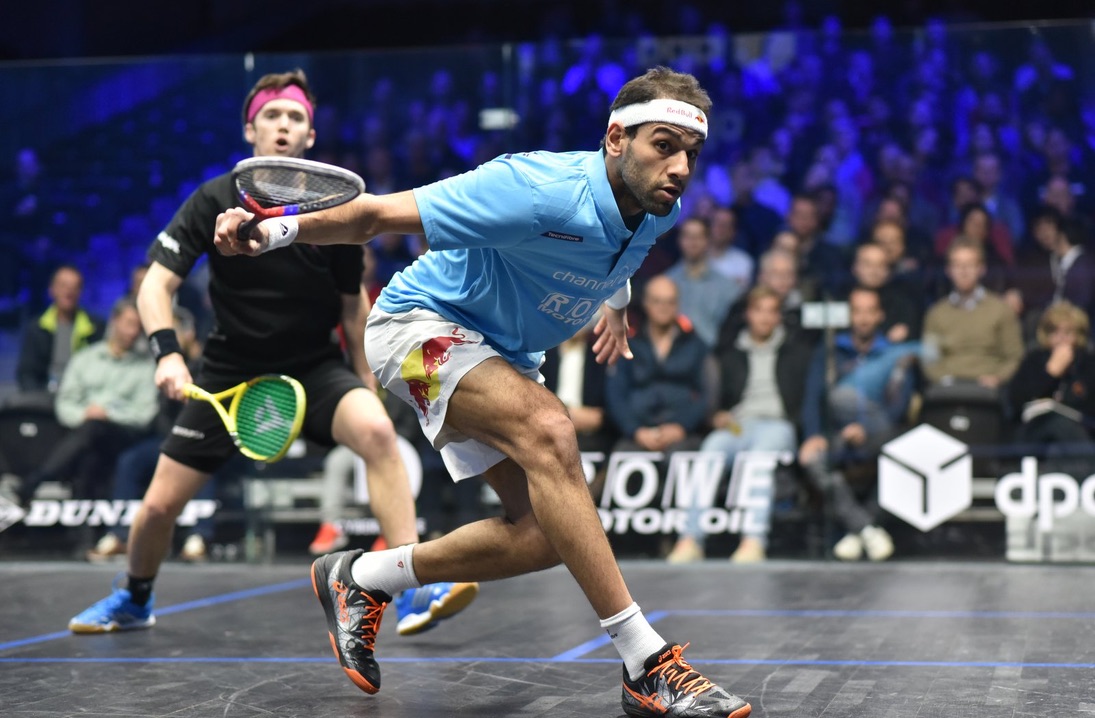 The third day of action at the DPD Squash Open, PSA Gold event saw all eight matches go the way of the higher-ranked player, with World No.2 Mohamed ElShorbagy setting up a quarter-final clash with younger brother, Marwan, in Eindhoven, Netherlands.

The Egyptian brothers will face each other for the first time since last season’s El Gouna International, where Marwan got the better of his older brother in the semi-finals before going on to win his first PSA Platinum title at the event.

Former World No.1 Mohamed kick-started his DPD Open Squash campaign with a confident 11-5, 11-8, 11-7 victory over World No.36 Chris Simpson in the second round of the event.

“The second game when it was 8-8 was very crucial and when I went 2-0 up, I felt I had a big advantage there and I’m really happy to be through.” 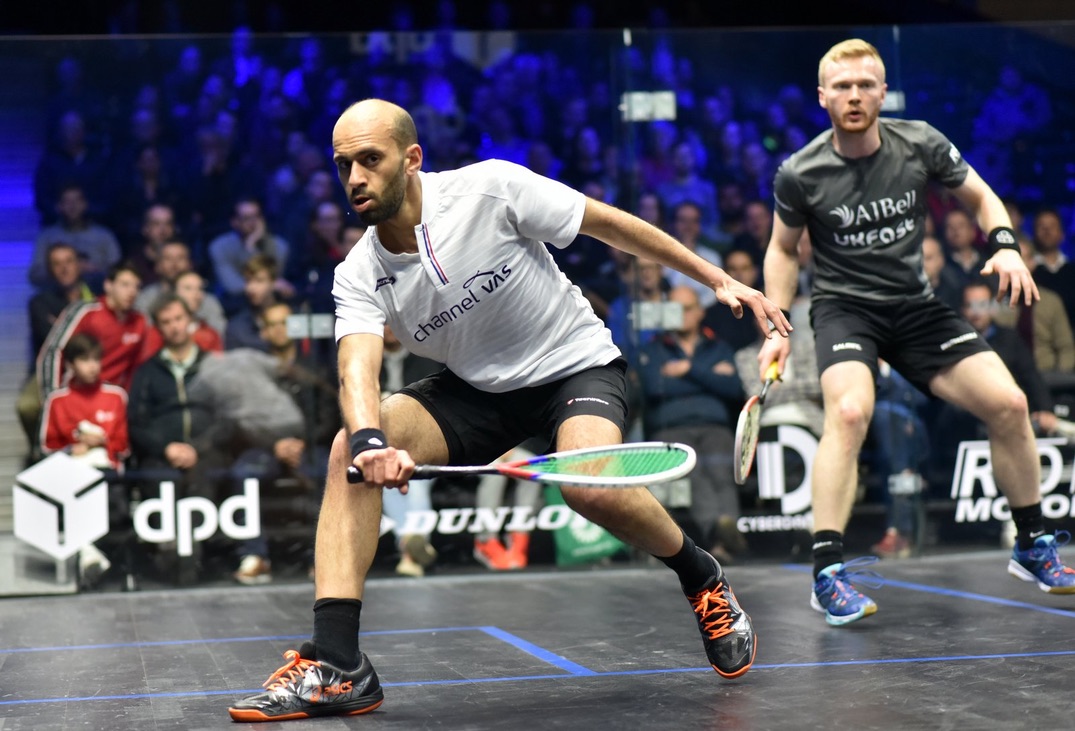 Marwan ElShorbagy and Joel Makin scrap it out for 83 minutes

“Joel has been playing at a top ten level,” said 25-year-old Marwan. “He has beaten the World No.1, he has beaten a few players inside the top ten so I knew that this match was probably going to be the toughest second round match I could have got.

“He [Mohamed] has been having an up and down season. Ali has taken the World No.1 from him and he is trying to get that back. They are having a good battle for that. I am looking to fighting the two of them next season.”

In the other men’s quarter-final, New Zealand’s Paul Coll will go head-to-head with Egypt’s former World No.1 Karim Abdel Gawad after they secured respective wins over Germany’s Raphael Kandra and France’s Gregoire Marche on day three.

Egypt’s World No.6 Gawad held off a late charge from dynamic Frenchman Marche to reach the last eight in five-games, while Coll displayed a confident performance to down Kandra in straight games.

“It was a very tough first round,” said former World Champion Gawad. “He’s a very strong physical player, an amazing athlete and so it was very tough for me today and I’m glad I won to get through to the quarters.” 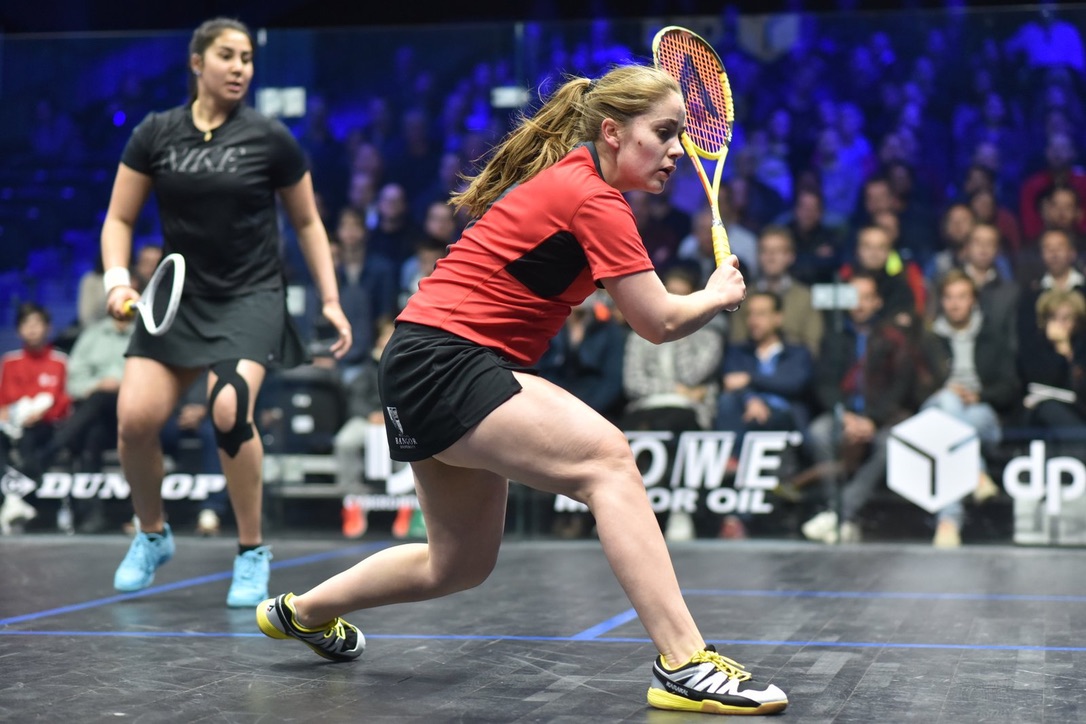 In the women’s draw, Wales’ World No.9 Tesni Evans stands in World No.2 Nour El Sherbini’s way in the next round after the reigning World Champion got the better of Malaysian icon Nicol David in straight-games in a dominant performance at the DPD Hub in Eindhoven.

“It’s really hard to play Nicol when you know it is the last season for her,” said 23-year-old El Sherbini following her win. “I always say it’s really special to play against Nicol.

“She really did a lot for our sport and I learned a lot from her. I always looked up to her when I was younger, so it’s really tough to play against her.”

Evans, meanwhile, was pushed all the way to five in a tense battle with Egypt’s Mariam Metwally. The two players faced each other just last month at the Black Ball Squash Open with that match also going all the way to five, as Evans used her mental edge to close out the victory.

“That was a really big match for me in many ways,” said Welshwoman Evans. “I’m really happy that I dug in and showed some grit and determination, which I think in the end that is what it came down to.

“The last few weeks I haven’t felt myself on court and my main strength is my grit and I didn’t have it. That’s really hard to take when you come off court and you haven’t given it everything, so it was a really big match in so many ways.” 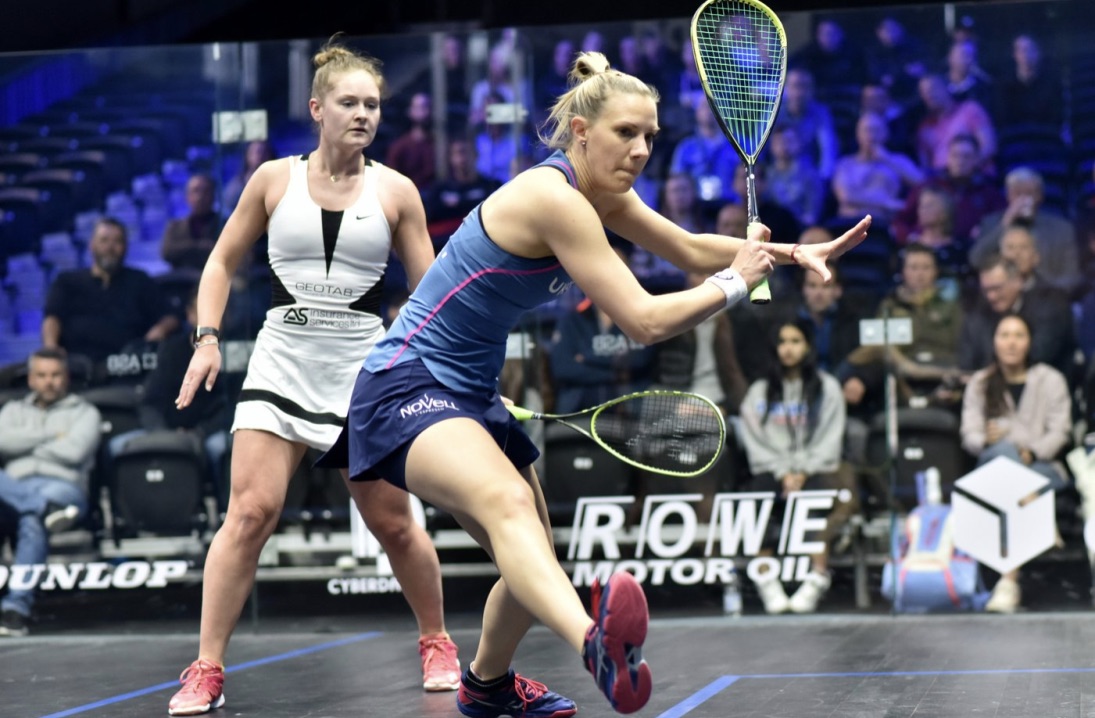 Former World No.1 Laura Massaro narrowly avoided defeat against Canada’s Hollie Naughton after the Englishwoman found herself trailing 2-0 in games.

Massaro was forced to call upon all of her resilience to find a way back against surprise package Naughton, who played some of her best squash in the opening two games. However, Massaro clawed her way back to win 8-11, 8-11, 11-8, 11-8, 11-7 in 49 minutes.

She will now face France’s World No.4 Camille Serme in the quarter-finals after the Frenchwoman defeated Egypt’s Yathreb Adel in four games in the first match of the day.

“I knew that I’ve got a good reputation for being a fighter,” said former World No.1 Massaro. “I thought that if I’m going to go down then go down fighting and luckily it was enough in the end.

“I would have liked to have not spent as long on court, but the priority is to win your first match. Camille is a tough player and for once I have no pressure on my shoulders so it will be nice to play that one.”

The quarter-finals will take place on Friday April 12 at 12:00 local time (UTC+2) and the action will be broadcast live on SQUASHTV (rest of world), Eurosport Player (Europe only) and the official Facebook page of the PSA World Tour (excluding Europe and Japan).