Alan Thatcher January 12, 2020 No Comments on Emily Whitlock fights back to send home hope Amanda Sobhy off the rails at Grand Central 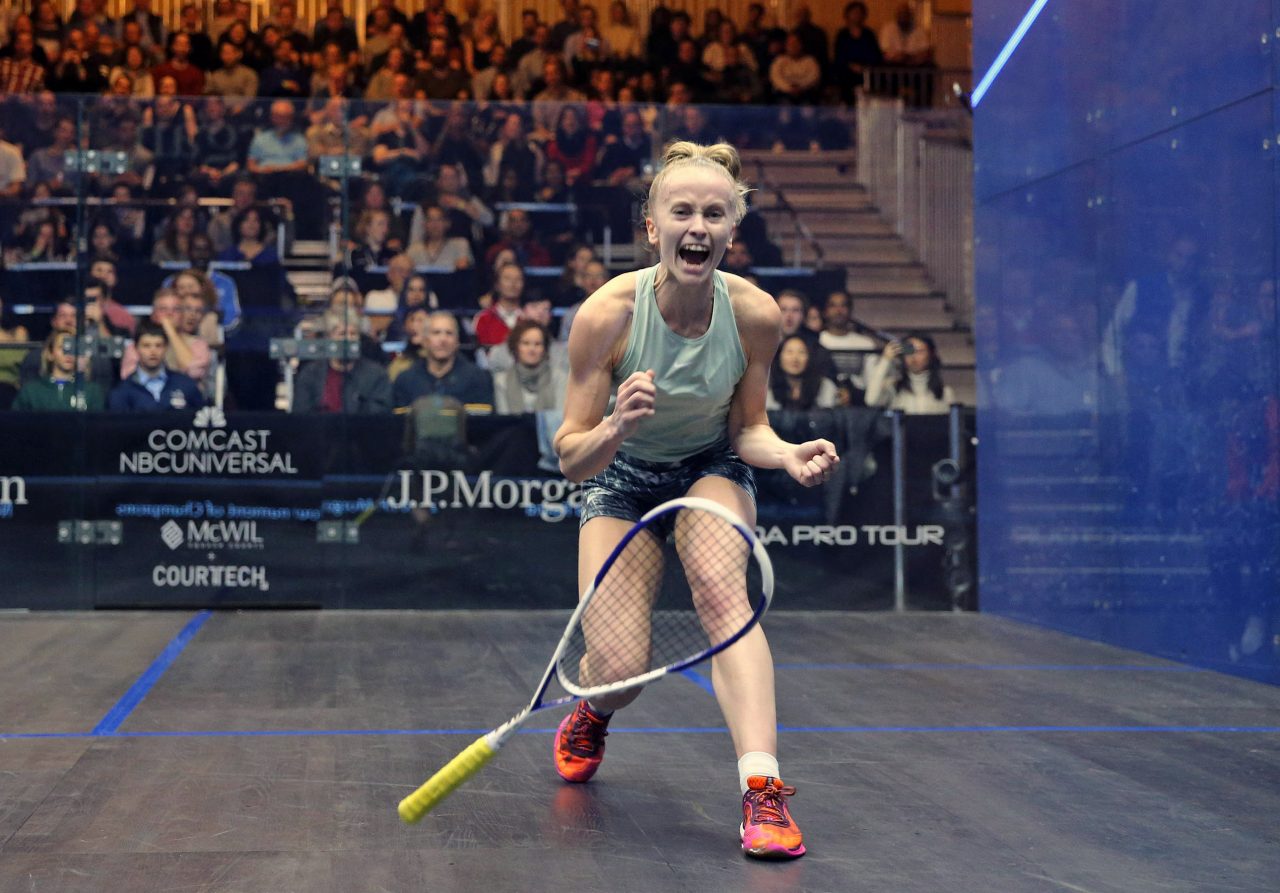 World No.27 Emily Whitlock claimed one of the biggest wins of her career as she completed a stunning comeback from two games down at New York’s Grand Central Terminal to beat US No.1 Amanda Sobhy on day three of the J.P. Morgan Tournament of Champions.

The 2016 Tournament of Champions finalist Sobhy was dominant in the opening two games to storm into a commanding lead inside 20 minutes. However, it took just as long for Whitlock to get back on level terms as the 25-year-old varied the pace and hit the American with a number of lobs.

“The last three games were a symbol of how I’ve been playing towards the end of last year,” said Whitlock, a former World No.12.

“I’ve really been working on everything, no injuries and being mentally and physically strong. I was so lost out there and seeing it a bit late in those first two games and she was just so dominant. I think I maybe saw the ball a bit quicker, hit the ball a bit cleaner on the racket and it just seemed to go my way.

“My coach said to me when I won yesterday: ‘You’re playing Saturday night, prime time, under the chandeliers in Grand Central Terminal in front of one of the best crowds on the tour’. Even if I’m the away player, I could hear people shouting my name, it just couldn’t have been a better time to win.”

Whitlock will look to replicate her performance against Sobhy when she takes on World No.13 Alison Waters, with 2015 runner-up Waters beating Egypt’s Nadine Shahin 3-0. Waters has won six of seven matches against Whitlock, but the latter did claim a memorable victory at the 2017 British Open to reach her first major quarter-final. 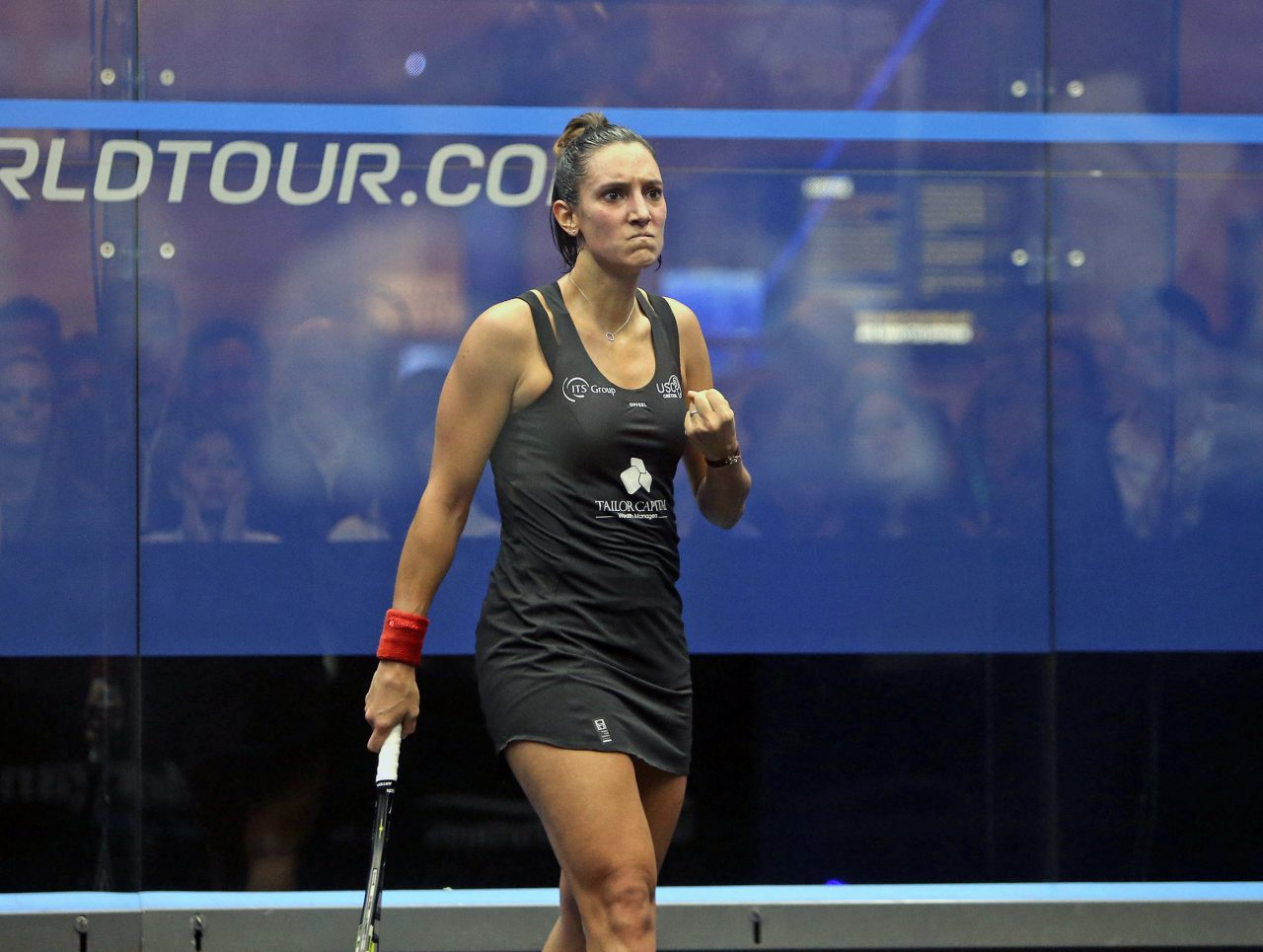 Camille Serme is pumped up about winning

The 19-year-old Elaraby combined talent with spirit as she twice came back from a game down to level, with Serme needing to fight hard to finally get the win over the line in the deciding game. The World No.5 will go up against another Egyptian, Yathreb Adel, in the last 16.

“It was tough, and I knew I had everything to lose and she had nothing to lose,” said Serme afterwards.

“We prepared this match very well with all of my staff, I think today it was about being more precise than her and not giving her any angles, because every time she had an angle – she’s Egyptian so she hits very good shots.”

The 2015 winner Raneem El Welily got her title challenge under way with a comfortable 3-0 win over Serme’s compatriot Coline Aumard, while World No.3 Nouran Gohar dispatched South Africa’s Alexandra Fuller in straight games.

Hania El Hammamy and Annie Au were the other women’s victors on day three. 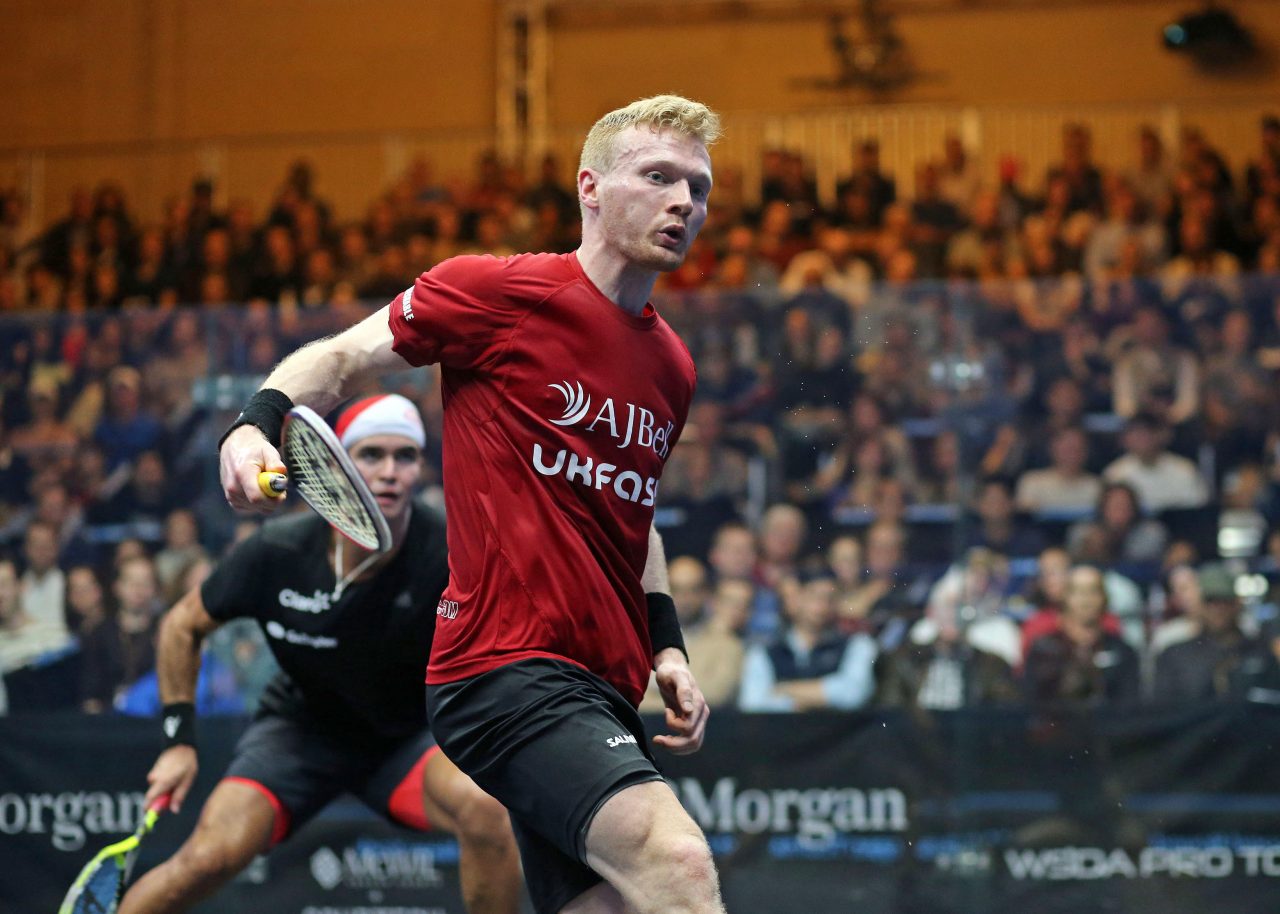 In the men’s tournament, another seeded player saw his campaign come to an end as Peru’s World No.6 Diego Elias fell to Welshman Joel Makin after five entertaining games.

“If you’re outside the top eight then you can get these draws at any time,” said Makin. “I’ve had two of those in a row now but if I want to get up to the top eight then I have to start beating those guys and do it anyway, I’m glad I did that and hopefully the draw has opened up a little bit. It’s still tough against James [Willstrop] being a quality player and he won this tournament ten years ago.” 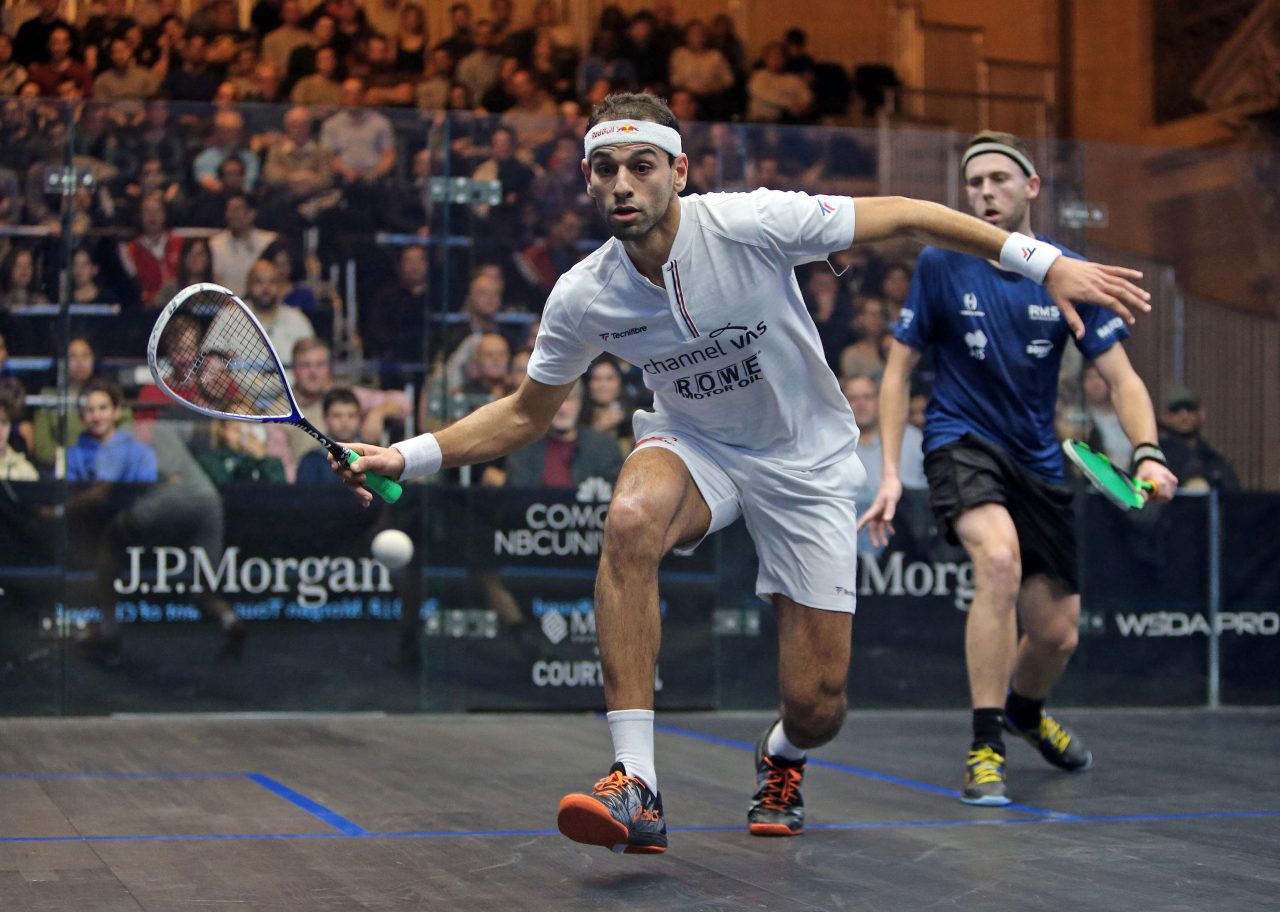 Mohamed ElShorbagy in action against Ryan Cuskelly, who announced his retirement from the PSA Tour after the match

Former World No.1 James Willstrop stands in Makin’s way after he beat Scotland’s Greg Lobban in straight games, while two-time winner Mohamed ElShorbagy began his tournament with a 3-0 victory over Australia’s Ryan Cuskelly.

New York-based Cuskelly, playing his final PSA tournament, beat ElShorbagy on this court two years ago, but the Egyptian was firing on all-cylinders as he closed out an 11-5, 11-6, 11-5 win to set up a third round meeting with France’s Gregoire Marche, who fought through illness to beat Egypt’s Zahed Salem 3-2. 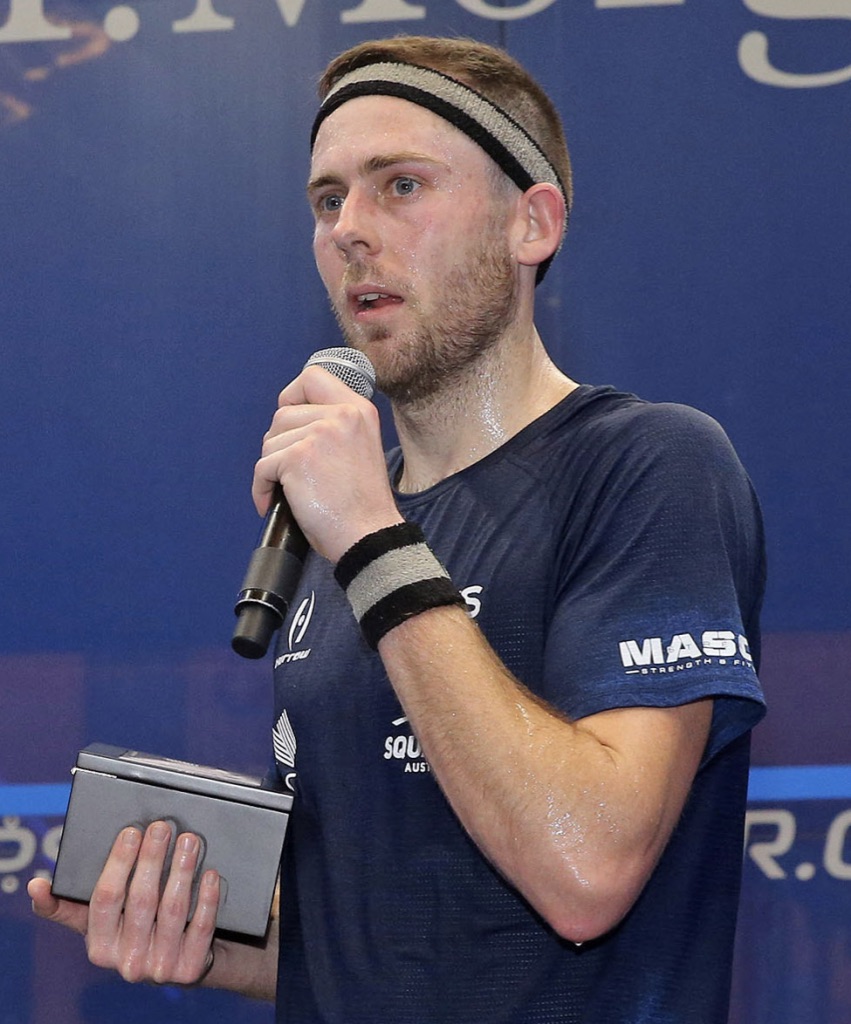 “Ryan has been one of the most hard working athletes that I have come across,” said ElShorbagy following his win.

“He got to two Platinum event semi-finals and the way he got up to World No.12 was unbelievable because the way he worked was something for all juniors to look up to and I hope he really enjoys retirement and time with his family now. I remember two years ago that he has beaten me on this court. I had to switch off from that and think about what I needed to do.”

The 2017 winner Karim Abdel Gawad came back from a game down to defeat Spain’s Iker Pajares Bernabeu, and he will play England’s Declan James in the last 16. Germany’s Simon Rösner and India’s Saurav Ghosal were the other winners and they will go head-to-head for a place in the quarter-finals.

The men’s third round begins today (Sunday), while round two action of the women’s event continues. Action at Grand Central Terminal begins at 12 noon (GMT-5) and will be shown live on SQUASHTV (rest of world), Eurosport Player (Europe only) and the official Facebook page of the PSA World Tour.

Willstrop was delighted to have partner Vanessa Atkinson and son Logan at courtside as he beat Greg Lobban. Willstrop revealed: “It’s great to be able to play in front of my son [Logan], I’ve always been vocal about this venue, it’s my favourite. I love coming here and so Vanessa and I wanted to get him here before I’m done, so he’s come as my physical trainer. He does my exercises with me in the morning!”

“I can’t start opening up the court, I’m too big for that,” added Willstrop. “I have to make sure I put him in those back corners and if I do then I have a chance and if not then I’m in a right mess.

Today’s women’s schedule sees England’s Victoria Lust up against Sabrina Sobhy, who will have added incentive to win after big sister Amanda went down to Whitlock. Also flying the Stars and Stripes will be Olivia Blatchford Clyne, who is up against No.9 seed Tesni Evans of Wales.