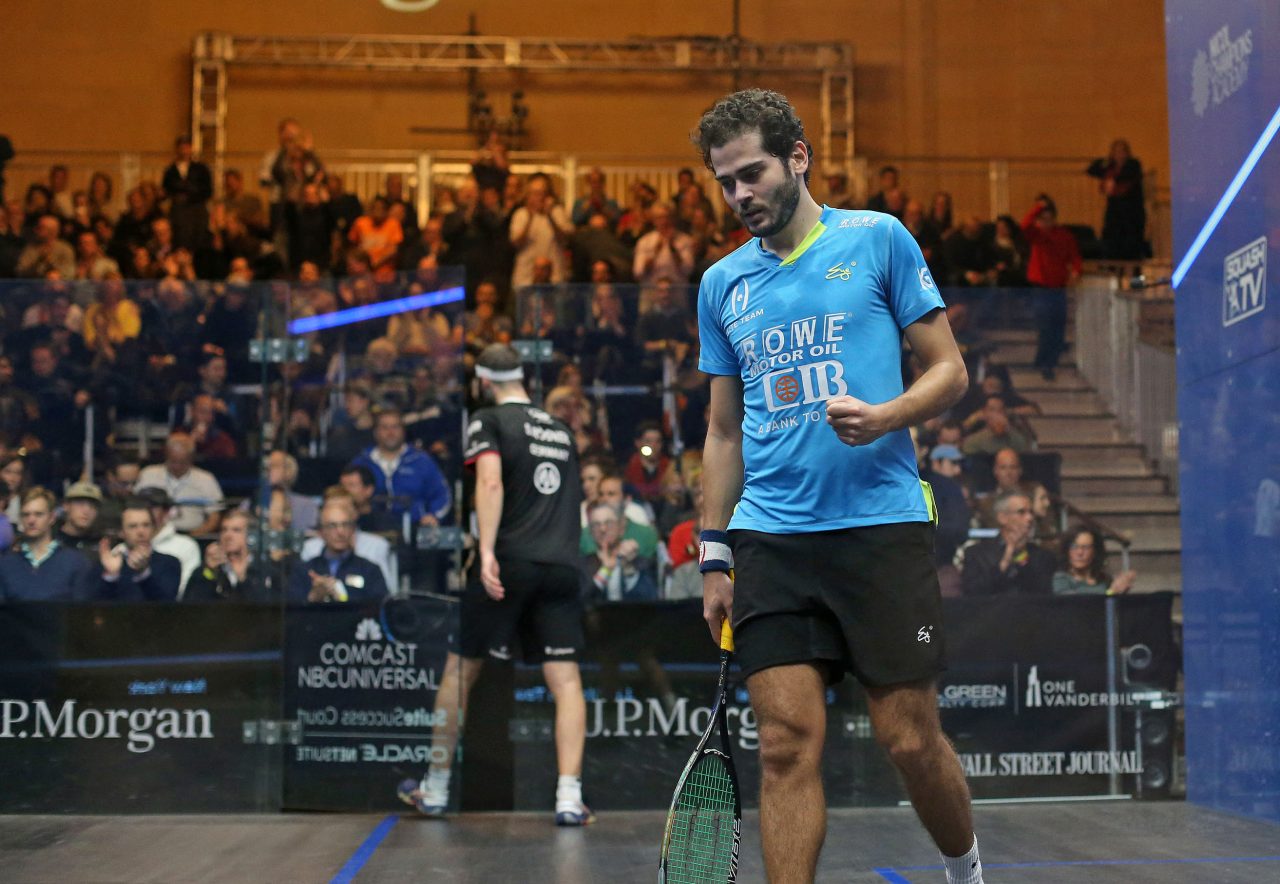 World No.5 Karim Abdel Gawad ended the title defence of Germany’s Simon Rösner after a commanding performance from the Egyptian saw him move into the semi-finals of the PSA Platinum event held at New York’s iconic Grand Central Terminal.

Gawad, the 2016 ToC champion, almost fell to an ignominious exit in round two after falling two games behind against World No.23 Joel Makin, but an ankle injury sustained by the Welshman in game three handed Gawad a lifeline as he progressed into the last 16.

But, following wins over compatriot Fares Dessouky and now Rösner, Gawad looks to have shaken off his slow start to the tournament and the former World No.1 dominated his opponent to end Rösner’s defence of the coveted trophy.

Gawad is a renowned slow starter but he dominated right from the beginning and maintained that control throughout the match to save some energy for what could be an epic semi-final against fellow Egyptian and top seed Mohamed ElShorbagy, who won a massive match against dangerous Peruvian Diego Elias.

“Simon beat me the last two times last season, and he is now the World No.3,” Gawad said after his victory.

“He has improved a lot, and he was always top 10 but now he is even better than he used to be. He is the defending champion here so it was a very tough match, of course.

“I had to be very strong mentally in order to win against someone like Simon, especially a 3-0 win. I had to focus 100% today.

Rosner revealed on social media: “Karim produced a masterclass today. I never got into the game. Had an amazing time here again, and looking forward to the World Open in Chicago in a few weeks time.”

This kid Elias is going to beat us all one day, says ElShorbagy

The day’s other men’s quarter-final saw World No.1 Mohamed ElShorbagy prevail in a thrilling five-game battle with Peruvian Diego Elias to avenge his defeat against the World No.11 in November’s Qatar Classic.

In what was arguably the match of the tournament so far, 22-year-old Elias twice took a one-game lead, but was pegged back both times by a resurgent ElShorbagy.

Elias fell just short in the deciding fifth game as fatigue took its toll, with the scoreline finishing 9-11, 11-9, 9-11, 11-8, 11-5 in the Egyptian’s favour. ElShorbagy and Gawad will meet in a repeat of the Black Ball Open quarter-finals, with Gawad prevailing en route to winning the tournament.

“This kid [Elias] is going to beat us all one day,” ElShorbagy said afterwards.

“We have played four times now, and all four have gone to five games. He beat me the last time, he just showed what a great player he is, and there is no doubt he is a future No.1 of the game.”

The women’s third round took place yesterday and saw both of the remaining US players exit the tournament as World No.11 Amanda Sobhy and World No.19 Olivia Blatchford Clyne suffered respective defeats against Egyptian duo Nour El Tayeb and Nour El Sherbini.

An out-of-sorts El Tayeb went a game behind twice against Sobhy, the US No.1, and fell to an 11-1 defeat in game three. However, the World No.3 was able to weather the storm in the fourth to level the scores, before holding her nerve to convert the decider.

“Ever since the draw came out, I’ve been thinking about this match,” said El Tayeb,

“It took a lot of fighting to be able to be in the match. I had Ali [Farag] and Raneem [El Welily] in my corner, the World No.2 and the World No.1, so they were just trying to keep me disciplined, encourage me and thankfully I fought until the end.”

Meanwhile, Blatchford Clyne fell victim to a masterclass from defending champion Nour El Sherbini, with the World No.2 overpowering her opponent to win 11-5, 11-5, 11-3 in 23 minutes.

El Sherbini will play fellow Egyptian Salma Hany for a place in the semi-finals after the World No.16 upset two-time runner-up Laura Massaro to win in straight games. The 22-year-old Hany will now compete in the last eight of a PSA Platinum event for the first time.

“I have been working towards this for so much time now,” said Hany. “I just relaxed and this is my first ever quarter-final in a [Platinum] event. Every time I step on this court, especially in this amazing venue, I get a bit nervous. When I talked to my physical coach, he told me that the most important thing is to enjoy my game and every time I was getting nervous, and I was thinking that I was getting closer to the quarter finals, I was just thinking about relaxing and to enjoy it like I was dancing.”

World No.1 Raneem El Welily got the better of India’s Joshna Chinappa and she will play World No.8 Nouran Gohar next in a repeat of their five-game clash in the semi-finals of the Hong Kong Open. 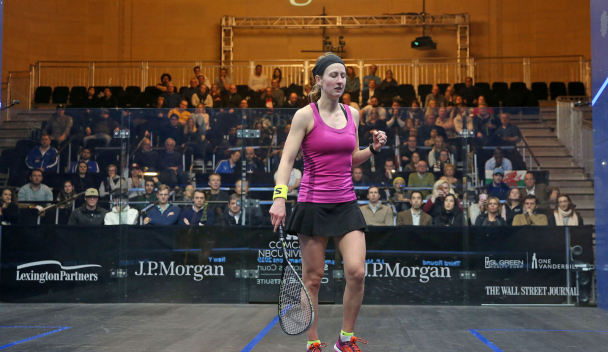 The day’s final third round match was an all-British battle as England’s World No.9 Alison Waters defeated Welsh World No.10 Tesni Evans by a 3-2 scoreline in a see-saw encounter lasting 71 minutes.

Evans loves nothing more than beating the top English girls but Waters had a score to settle after losing to the Rhyl Rocket in the final of the National Championships last year.

The first three games were tight throughout, but Evans won the third to take her first lead in the match.

Waters bounced back to come from behind and level the game in the fourth, with a comfortable 11-6 victory.

Waters, who will face Nour El Tayeb in the quarter finals, thanked spectators for staying until the end. She said: “Yeah it was a tough one. It was point for point and it felt like that really.

“I felt strong in the fifth. I probably didn’t look like it at times but I think Tesni was struggling more than I was. Really delighted, and thanks everyone for staying because it is a late one, I know.

“I felt like I was moving well but I felt like I rushed it a bit at times. Obviously, it was a good chance for both of us to get to the quarters.

“There was extra pressure on it so I wanted to come out and put on a big show. I felt strong at the end and I am delighted to be in the quarters.”

The last two men’s quarter-finals – and the entirety of the women’s last eight fixtures – will be played tomorrow (Tuesday January 22). All of the action from Grand Central Terminal will be broadcast live on SQUASHTV (rest of world) and Eurosport Player (Europe only) and play starts at 13:30 (GMT-5).