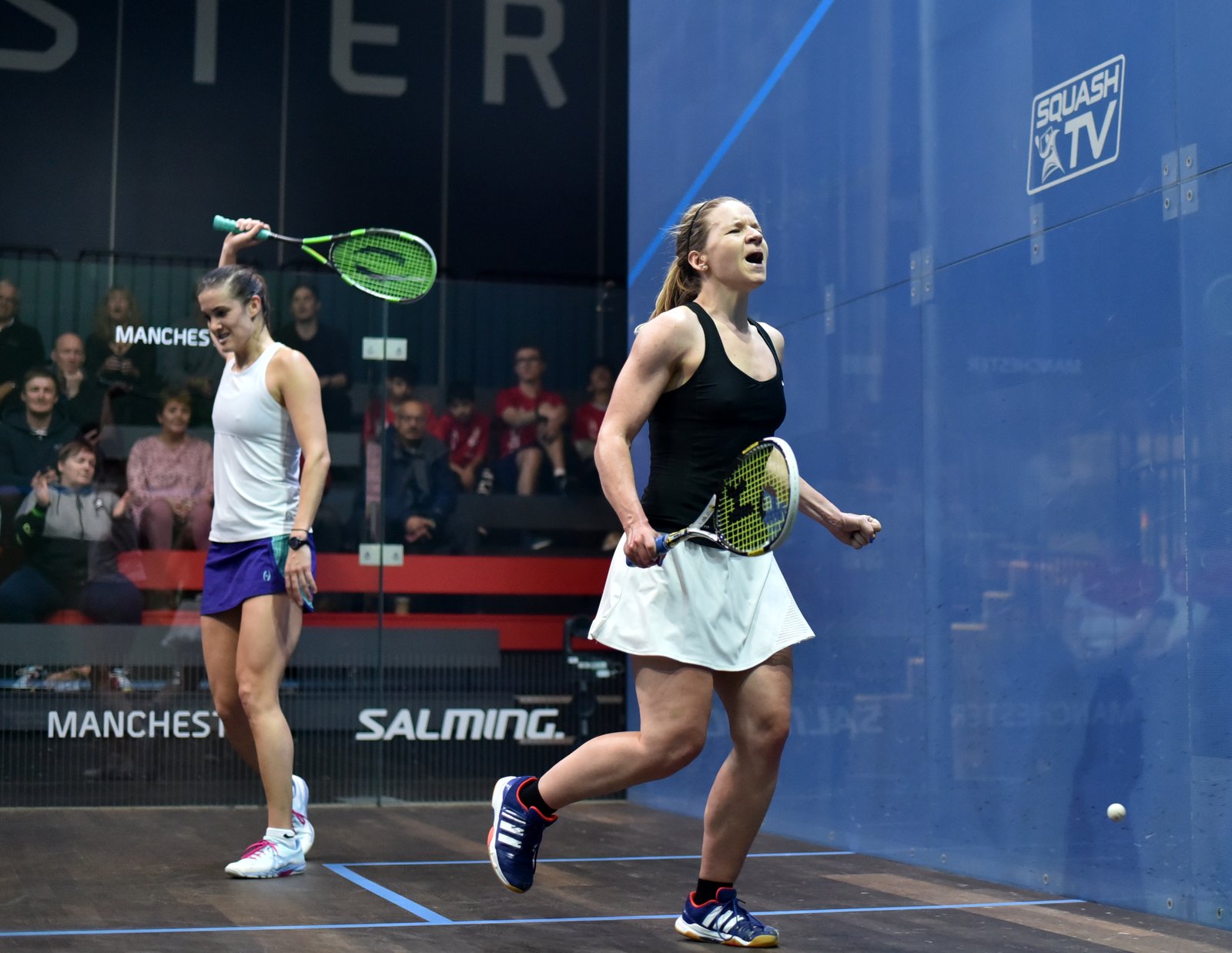 Julianne Courtice celebrates her victory on the opening day in Manchester

Day one drama at National Centre
By ELLIE MAWSON in Manchester

Courtice was one of three Englishwomen who all advanced to the last 16 of the PSA World Tour Silver tournament, after she produced a strong performance to take out Canada’s higher ranked Samantha Cornett in four-games.

The Manchester Open – a women’s only tournament – is supported by Manchester City Council and follows the successful staging of the award-winning AJ Bell PSA World Championships in the city in December 2017, where equal prize money was on offer across both the men’s and women’s events for the first time in the tournament’s history.

World No.36 Courtice started well to take the first two games before keeping her composure to survive a Cornett comeback and close out a 12-10, 11-8, 9-11, 11-9 victory. Courtice will now face USA No.1 Amanda Sobhy in the second-round tomorrow.

“It was a massive win,” said 27-year-old Courtice following her victory. “Sam earlier this year won 3-1, so I knew I was up against it and it’s always difficult with a late draw change.

“It’s so good to play in front of a home crowd, there are some people here to support me, so it’s great. It’s hard to keep the consistency and that’s why these top guys are so hard to beat and with Sam, you really have to push her to get that mistake from her.” 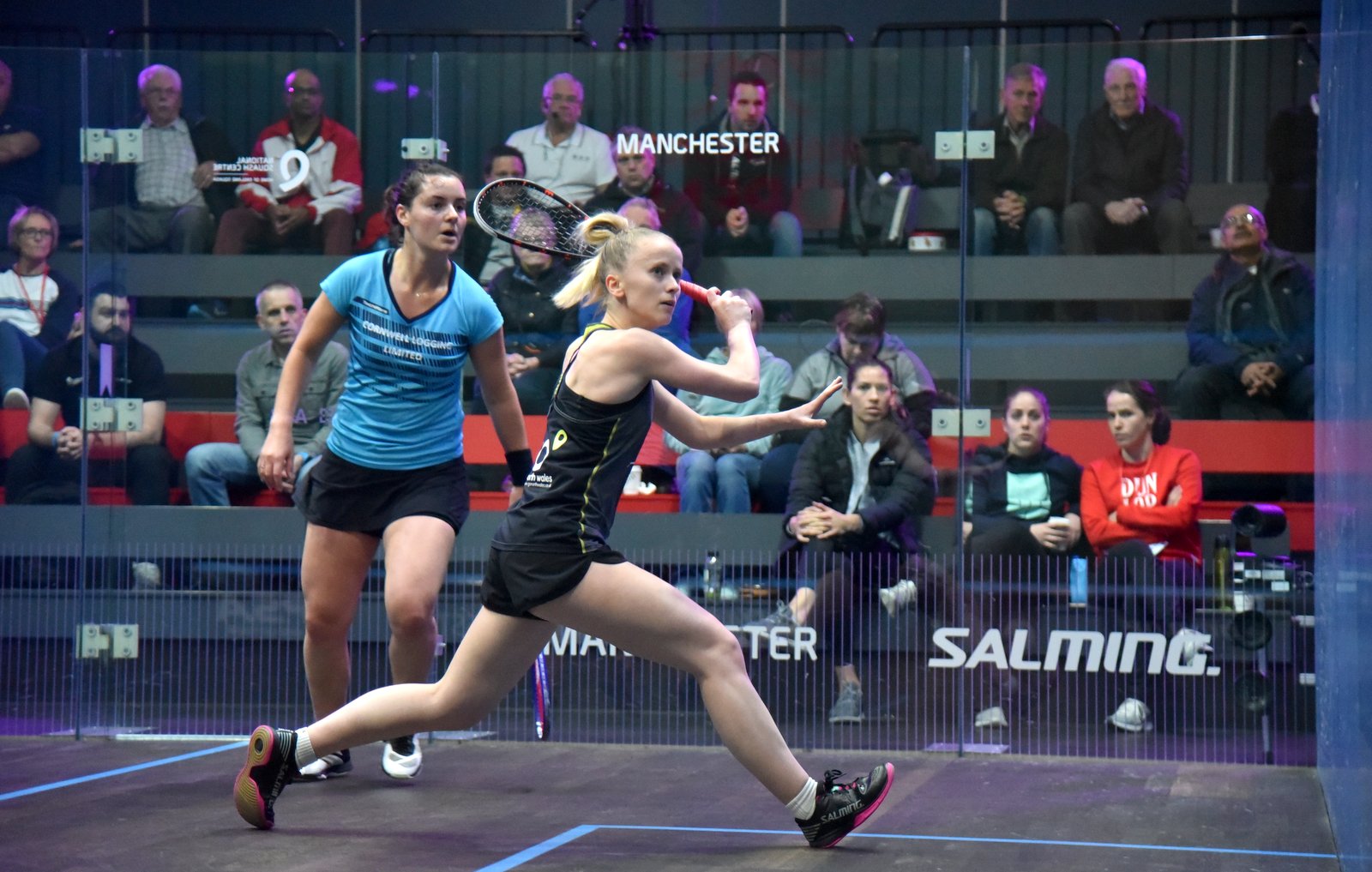 Emily Whitlock on the way to victory

She will be joined in round two by compatriots Emily Whitlock and Millie Tomlinson after they enjoyed respective wins over New Zealand’s Amanda Landers-Murphy and Canada’s Danielle Letourneau.

Whitlock will take on Egypt’s World No.7 Nouran Gohar in the last 16, while Tomlinson faces an all-English showdown with former World No.1 Laura Massaro for a place in the quarter finals.

“I think I was really pumped up for the first two games. I came out really fast,” said England’s Tomlinson after her five-game battle with Letourneau.

“I let her back in, but I’m glad that I managed to refocus for the last game. I have a huge advantage as this is my home court. I lived here for a couple of years, so I played on this court a lot and obviously, the home crowd help as well.”

Wildcard Rachael Chadwick was unable to complete a clean sweep for the English players in round one as she fell to Dutch No.1 Milou van der Heijden.

World No.32 van der Heijden put in a confident performance to ease past Chadwick and set up a round two clash with Wales’ World No.8 Tesni Evans. 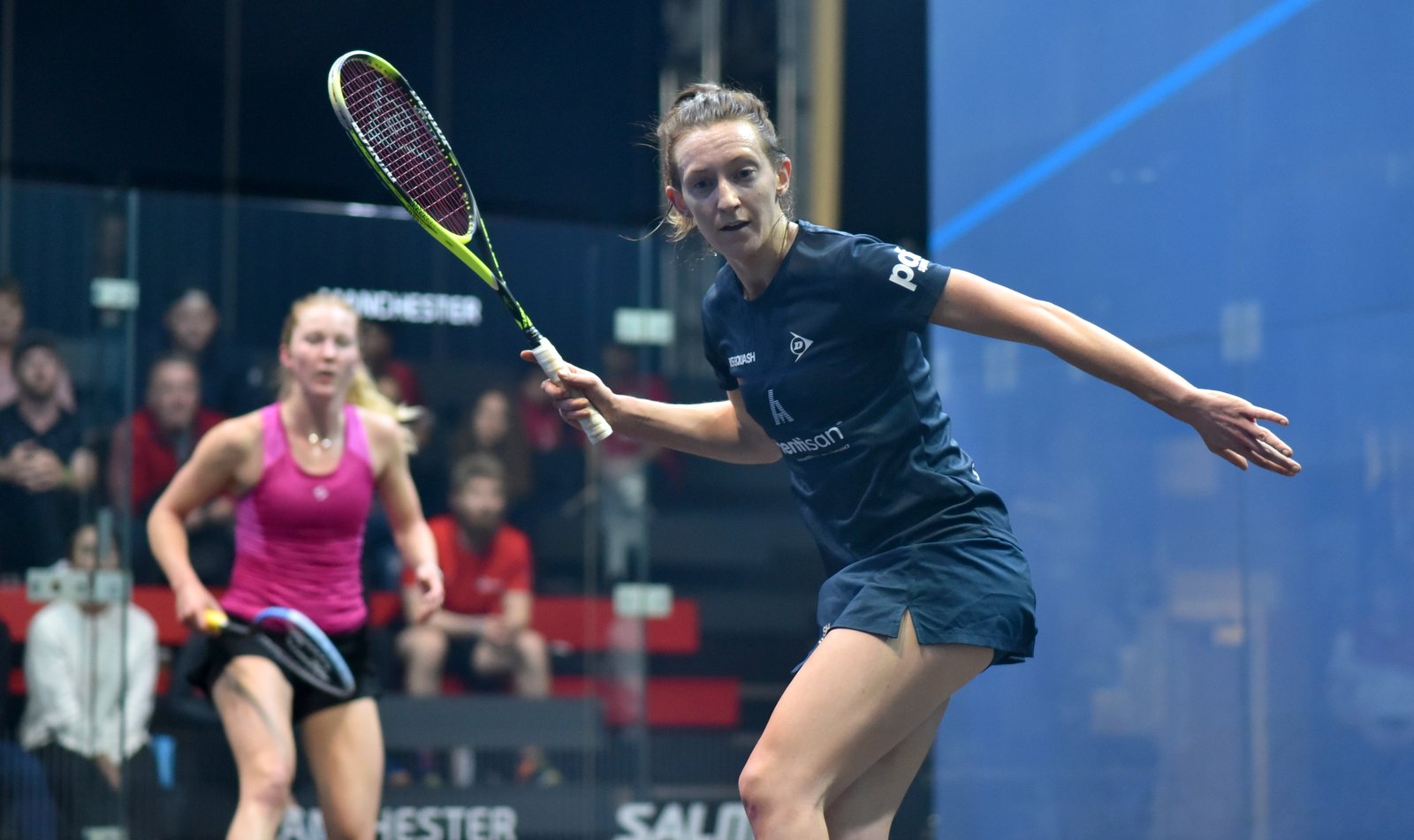 Millie Tomlinson on the attack

“I’m very happy with how it worked out and how everything went to plan,” said van der Heijden afterwards. “I’ve only played here twice before, but never on the glass, so it was a good experience to get on the glass and this one is different to others that I have played on. It takes a bit of getting used to, but it is a nice court and I enjoyed it.”

Meanwhile eight-time World Champion Nicol David, who will be playing for the last time in Manchester following her decision to retire at the end of the season, booked her place in the second-round courtesy of a dominant win over United States’ Haley Mendez.

The Malaysian icon will now face England’s No.1 Sarah-Jane Perry for a place in the quarter finals tomorrow.

“It’s great to play Haley in Manchester on the glass court,” said 35-year-old David following her win. “We go way back, so coming here and playing her is a treat and I’m so pleased to see how she is playing.

“SJ is a really tough competitor, we have had so many good matches and just because of my ranking you do get those tough draws on the day you just want to play and give it your best.”

There was also joy for Egypt’s World No.14 Salma Hany after she survived a comeback from Canada’s Hollie Naughton to secure a second-round berth.

Naughton took the opening game, before Hany struck back to take the next two. However, Canadian Naughton refused to go away quietly though as she drew level to push the game to a deciding fifth, but it was the higher-ranked Hany who was eventually able to close out by an 9-11, 11-7, 11-9, 5-11, 11-4 scoreline in 48 minutes.

“Hollie has been playing really well and has been pushing all the top players,” said the 22-year-old Egyptian. “Today, she really made me work hard. It was a bit scrappy in the middle, after the fourth I just made sure I stuck to my plan and focused on every point. The good start in the fifth helped me a lot and I’m really glad I got the win.”

Belgium’s World No.24 Nele Gilis and France’s World No.35 Coline Aumard, meanwhile, set up second round fixtures against World No.5 Joelle King and Egypt’s World No.3 Nour El Tayeb, respectively.

Gilis overcame Scotland’s Lisa Aitken in straight-games, while France’s Aumard put in a dominant display to power past Egypt’s World No.31 Mayar Hany.

“I knew what to expect and I tried to take the pace off as much as I could because she likes to hit it hard,” said Belgium’s Gilis following her win over Aitken. “It’s hard to stay focused against such a good player like Lisa and I’m happy that I stuck to my game plan.”

The second round takes place on Friday May 10 at 12:00 local time (UTC+1) and the action will be broadcast live on SQUASHTV (rest of world), Eurosport Player (Europe only) and the official Facebook page of the PSA World Tour (excluding Europe and Japan).